Two deadly attacks in less than a week announce Hamas’s strong presence in the West Bank.
By Brent Nagtegaal • December 14, 2018 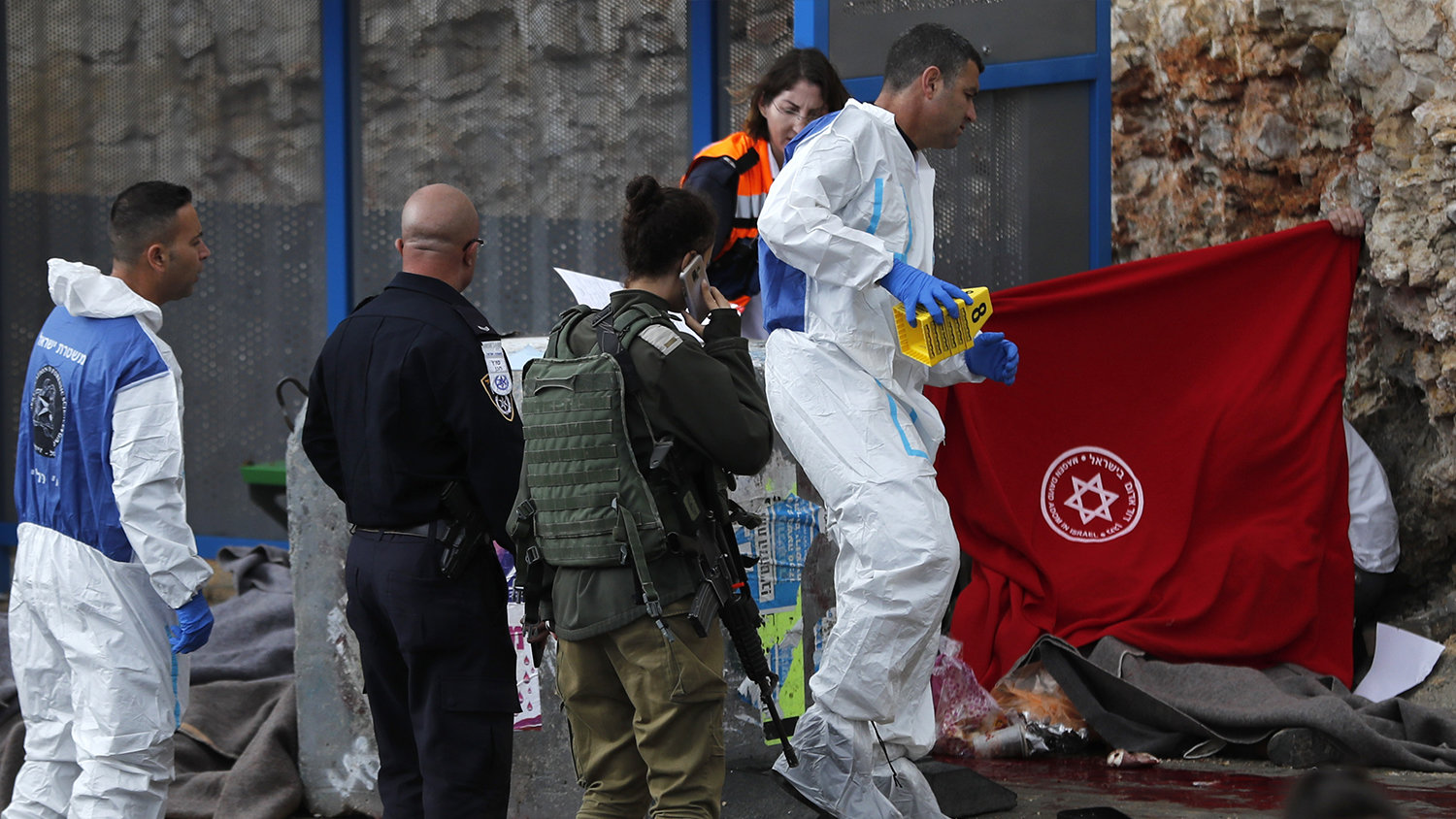 Israeli forces and forensic inspect the site of a Palestinian drive-by shooting attack outside the West Bank settlement of Givat Asaf, northeast of Ramallah, on December 13, 2018.
AHMAD GHARABLI/AFP/GETTY IMAGES

Jerusalem - Iran is putting pressure on Hamas to open a new front against Israel in the West Bank, according to Israeli security analysts.

In a media briefing on Thursday, December 13, attended by Watch Jerusalem, senior Middle East analyst for the Jerusalem Center for Public Affairs Yossi Ben Menachem explained: “All indications are that Iran is behind these terror acts, putting pressure on Hamas to ignite the West Bank and open a new front against Israel.”

The comments came just 30 minutes after a terrorist attack occurred just north of Jerusalem. In this attack, a terrorist got out of his car and fired at soldiers and civilians waiting at a bus stop. The terrorist got back into his car and sped away. Two soldiers were killed at the scene and others were rushed to hospitals in Jerusalem.

Thursday’s deadly terrorist attack occurs just four days after a similar, nearby drive-by shooting, which resulted in a pregnant woman and six others being taken to a hospital; the mother is in critical condition. An emergency C-section took place on the mother; however, the 30-week-old baby did not survive.

After a three-day manhunt for the killer, Israeli forces located and killed the assailant in a firefight on Thursday morning. Hamas claimed credit for the deadly shooting attack, saying the suspect who was shot dead by Israeli forces was one of its members. “Hamas announces with great pride the death of its martyr Salih Omar Barghouti, the perpetrator of the heroic Ofra operation,” the terror group wrote on its official Twitter account.

Less than a week after #UNGA’s failure to adopt a resolution condemning #Hamas, the terror group claims deadly #terror attack & hails the perpetrator as a ‘heroic martyr’ for shooting a pregnant woman resulting in the death of her baby.

According to Menachem, both attacks are part of an increase in Hamas terrorist activity in the West Bank, which Iran is instigating, in order to maintain its resistance against Israel while there is a lull of violence on the Gaza border. On December 10, Menachem wrote of Hamas’s response:

Hamas published a notice in praise of the attack near Ofra. It states that the terror attack shows the “resistance” has made a security breakthrough and “the West Bank is leading the initiative in resistance to the occupation and the response to attacks on Palestinians, and it demonstrates that the resistance is alive, despite constant efforts to uproot it.”

Last month, the head of Israel’s security agency, Nadav Argaman, warned of a deceptive quiet in the West Bank.

Speaking to the Knesset’s Foreign Affairs and Defense Committee, Argaman said: “On the surface, it appears as if there’s relative calm, but this quiet is deceptive because beneath the surface tensions are increasingly simmering.”

Argaman noted that in the past year, Shin Bet has foiled 480 attacks, arrested 219 Hamas cells, and thwarted about 590 “lone wolf” attackers. Argaman said, “The large scope of attacks can only indicate the extent of terrorism taking place beneath the surface.”

The latest two attacks, though the most-deadly, are part of an uptick of violence along the main roads in the West Bank. According to Haaretz, “On average in recent months, between four and eight shootings, stabbings or car-ramming attacks have been committed there per month.”

Such attacks led the head of Binyamin Regional Council Israel Gantz to demand that the government do something to stop the violence. “Residents of the Binyamin region will not be sitting ducks in a Palestinian shooting range,” Gantz said on Thursday. Gantz called on the government to implement a temporary ban on Arabs driving on the main north-south West Bank highway, to stop the violence.

While the Israeli government is yet to impose a driving ban, the army is actively trying to discover and root out all the Hamas cells that lead to the latest shootings. According to Haaretz, the army has decided to bolster its presence inside the West Bank, in hopes that additional soldiers prevent copycat attacks. On Thursday, the army went even further by fully sealing off Ramallah, the capital city of the Palestinian Authority, in order to hunt down Hamas cells.

Speaking about Hamas sleeper cells in the West Bank in October, Dr. Moshe Elad, a lecturer in the Middle East department of the Western Galilee Academic College and a colonel in the Israel Defense Forces, said:

It has been exposed that [Hamas leader Salah Arouri] received a special budget to prepare for an uprising in the West Bank. He is trying to arm sleeper cells for the day that Hamas decides to activate them.

They are waiting for when they think the time is ripe to launch a revolution.

Hamas, which is heavily funded by Iran, has set up secret operatives throughout the West Bank. Its operatives go about their daily lives until they receive notice that it’s time “to launch a revolution.” Elad continued:

Hamas in Gaza is intent on preparing armed sleeper cells throughout the West Bank—not only to create an ability to attack Israel, but also to target its internal rival, the Palestinian Authority. …

They believe that the day will come when they can take over the West Bank, like they did in Gaza.

For over a decade, the Watch Jerusalem has watched for Hamas to increase in power in the West Bank, to the point that it would actually replace Fatah as the dominant force of the Palestinians. While Israel and Fatah coordinate their security forces to prevent such a change, Iran is actively pushing for dominance.

In October, Prime Minister Benjamin Netanyahu said that, if not for Israel’s security forces, the Fatah leadership wouldn’t last two minutes against Hamas. “They’d be overrun in two minutes. A couple of years ago we uncovered a plot of 100 Hamas men to overthrow Abu Mazen. Overthrow? Kill him. Not kill him politically. Kill him. So, if we weren’t there, they’d not be there, which is exactly what happened when we left Gaza.”

Netanyahu’s comments speak to how powerful Hamas already is in the West Bank.

Watch Jerusalem editor in chief Gerald Flurry has forecast since 2006 a strengthening of the relationship between Iran and Hamas, leading to Hamas possibly taking over the West Bank. In “Iran Conquered Lebanon … Now What?”, Gerald Flurry wrote:

The Arabs of the Fatah party currently control the West Bank. However, Hamas terrorists (and weapons) are present throughout the West Bank and there is little doubt that they are working toward getting control of this strategic region of Israel.

In this article written over 10 years ago, Mr. Flurry shows how conquering Jerusalem is a major goal of Iran’s forces. He also shows how Iran’s growing power in the Gaza Strip and especially Lebanon will lead Iran to push harder to control the West Bank, in order to give it the ability to make a play on Jerusalem. Recent events like the November 13 missile barrage into Israel from Gaza, and the discovery of sophisticated Hezbollah attack tunnels on the Lebanese-Israeli border, show how accurate our forecast has been. While Israel and Fatah will do all they can to stop such a takeover of the West Bank, Bible prophecy does indicate that it will likely happen.

While a Hamas takeover of the West Bank is not pleasant to contemplate, that event is a necessary step toward Jerusalem’s eternally bright future. If you would like to receive the prophetic context for these forecasts and learn what you can do to prepare for them, please read Mr. Flurry’s booklet Jerusalem in Prophecy.