Long Arm of the Islamic Republic

Iranian general: ‘New reality of Iran’s missile might: There are no obstacles.’
By Warren Reinsch • February 4, 2019 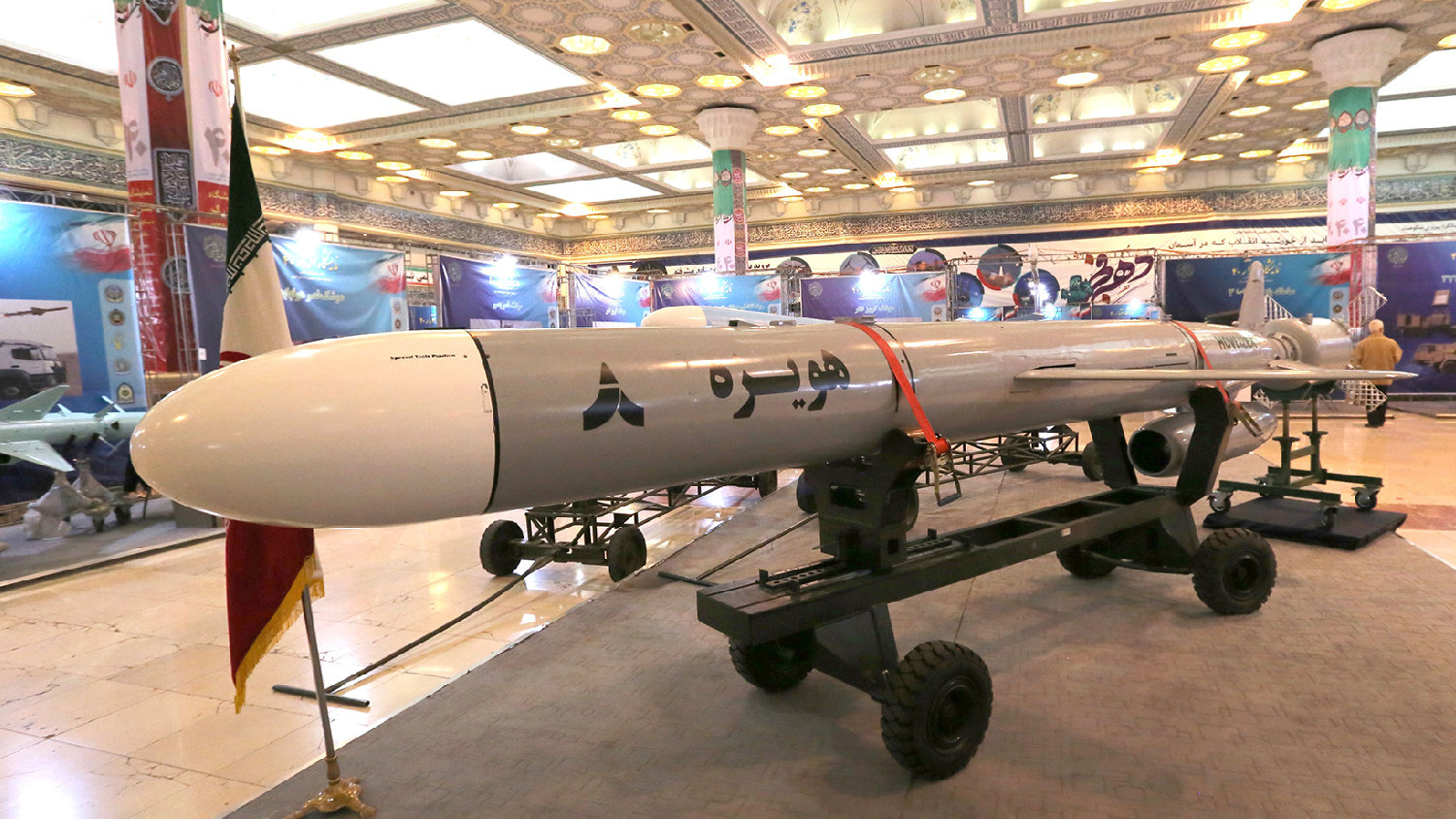 Hoveizeh, Iran’s new cruise missile is shown during an exhibition in the capital Tehran on February 2, 2019.
ATTA KENARE/AFP/GETTY IMAGES

Iran successfully test-launched a new domestically made, long-range cruise missile on February 2. The test, held on the 40th anniversary of the Islamic Revolution, indicates that Iran remains resilient in its missile development, despite heavy sanctions from the United States.

The Hoveizeh cruise missile is said to have a range of 800 miles (1,300 kilometers). Iranian Defense Minister Brig. Gen. Amir Hatami said the missile “accurately hit the set target” from a distance of 750 miles (1,200 kilometers), describing it as the “long arm of the Islamic Republic of Iran.”

According to Hatami, the missile “flies at a very low altitude” and “can be ready in the shortest possible time,” making it easy to deploy.

A 37-second video from the Iranian government shows the successful launch multiple times from different angles and the missile striking its test target somewhere in the desert.

The surface-to-surface cruise missile was manufactured by the Iranian Defense Ministry’s Aerospace Industries Organization. At the unveiling ceremony on February 2, Hatami said that the cruise missile is part of the Soumar missiles, which Iran added to its arsenal in 2015. The Soumar missile is derived from the Russian Kh-55, which is capable of carrying a nuclear warhead.

Hatami also said the Haveizeh cruise missile is a “symbol of self-belief,” and he stressed the technological progress of this significant military achievement. He said the successful test shows that “no obstacle can hinder the Iranian nation’s determination and will in the defense field.”

Iranian officials have repeatedly stated that Iran “will not hesitate to strengthen its military capabilities, including its missile power.”
Tasnim News Agency

According to Haaretz, at the event, “Amirali Hajizadeh, head of the Revolutionary Guards’ aerospace division, said … Iran had overcome initial problems in producing jet engines for cruise missiles and could now manufacture a full range of the weapons.”

On Sunday, an unsourced report by Iran’s Fars News Agency said the nation added new precision-guided warheads to its longest-range ballistic missile. “The new generation of missiles with guided warheads has been named Khoramshahr 2, and they can be controlled until hitting the target and are able to carry warheads weighing nearly two tons,” according to the report. Iran says the Khoramshahr 2 missile was designed to carry conventional warheads only and has limited its range to a maximum of 1,250 miles (2,000 kilometers), but it also claims the technology could allow it to travel much further. Either way, Israel lies well within this missile’s range.

In February 2018, Iranian Supreme Leader Ayatollah Ali Khamenei said, “Without a moment of hesitation, the country must move to acquire whatever is necessary for defense, even if the whole world is opposed to it.”

“If today the Europeans or others try to plot and pursue Iran’s missile disarmament, then we will be forced to resort to a strategic leap.”
Brig. Gen. Hossein Salami

Since the ayatollah’s comments, Iran has made headway in becoming self-sufficient in its weapons development. The government-linked Tasnim News Agency said that Iranian officials have repeatedly stated that Iran “will not hesitate to strengthen its military capabilities, including its missile power,” and that its “defense capabilities will be never subject to negotiations.” This poses a potential problem for Europe, as it has threatened further economic sanctions against Iran if it doesn’t halt its ballistic missile testing. French Foreign Minister Jean-Yves Le Drian told reporters, “We are ready, if the talks don’t yield results, to apply sanctions firmly, and they know it.”

In response, Brig. Gen. Hossein Salami said, “If today the Europeans or others try to plot and pursue Iran’s missile disarmament, then we will be forced to resort to a strategic leap.”

Salami said it is Iran’s strategy “to erase Israel from the global political map.”

He added, “All that hear me today, come to terms with the new reality of Iran’s missile might: There are no obstacles or technical limitations to us increasing range.”

In January, Iran attempted to launch a satellite into low-Earth orbit using domestically manufactured rockets. Though the attempt failed, it showed the world that Iran has no intention of slowing down its progress. Iran could use similar technology required to develop an intercontinental ballistic missile capable of striking targets as far away as 6,200 miles (10,000 kilometers). The United States says Iran’s ballistic missile development program violates a United Nations Security Council resolution. Iran denies the claim that it is seeking to develop a nuclear warhead, stating that its ballistic missile program is for self-defense only.

Speaking at a space technology conference, the secretary of Iran’s National Security Council spoke of “hundreds of kilometers of tunnels dug underneath [Israelis’] feet, and the resistance forces in Gaza and Lebanon have missiles with pinpoint accuracy and are ready to respond to any foolish Israeli behavior with an inferno.” (For more information, read “The Hezbollah Threat Is Dangerously Real” and “Reporter’s Diary: A Day in the Gaza Envelope.”)

Salami said it is Iran’s strategy “to erase Israel from the global political map.” A few days later, at a conference in the Iranian city of Mashhad, he vowed that a new war would “result in Israel’s defeat within three days.”

For more information on Iran’s desire to destroy Israel, listen to the podcast below.

Our modern, sophisticated, enlightened societies like to believe that we have evolved way past the time of nations being hell-bent on the destruction of others. However, what we are witnessing in the north of Israel is Iran’s manifest desire to do just that.

While Israel has been able to thwart Iranian attacks thus far, the Bible prophesies that Iran isn’t going to stop pushing. Daniel 11:40 says that an end-time power called “the king of the south” will have a pushy foreign policy. Since the 1990s, Watch Jerusalem editor in chief Gerald Flurry has forecast that radical Islam, led by Iran, will fulfill the role of this biblical king of the south. In his booklet The King of the South, Mr. Flurry explains this forecast and also mentions Iran’s ballistic missile testing as one aspect of Iran’s push. He writes:

Where is this nation’s pushiness leading? To war! Just as it has in the past. It’s leading to terrifying war with weapons of mass destruction. It can lead no place else.

Iran will continue pushing its missile testing forward, and it gives no indication of stopping. Rather, Iranian officials have said Iran “will not hesitate to strengthen its military capabilities, including its missile power.” Over the past six months, Iran successfully attacked a Kurdish meeting in Iraq and an Islamic State enclave in Syria, launched a medium-range ballistic missile capable of carrying multiple warheads, and launched a missile at an Israeli ski resort in the Golan Heights. Iran has shown it will not back down, despite having its vital oil, gas and shipping sectors heavily sanctioned by the U.S. since November.

Watch for Iran to continue pushing its missile development as a means of achieving regional superiority in the Middle East.