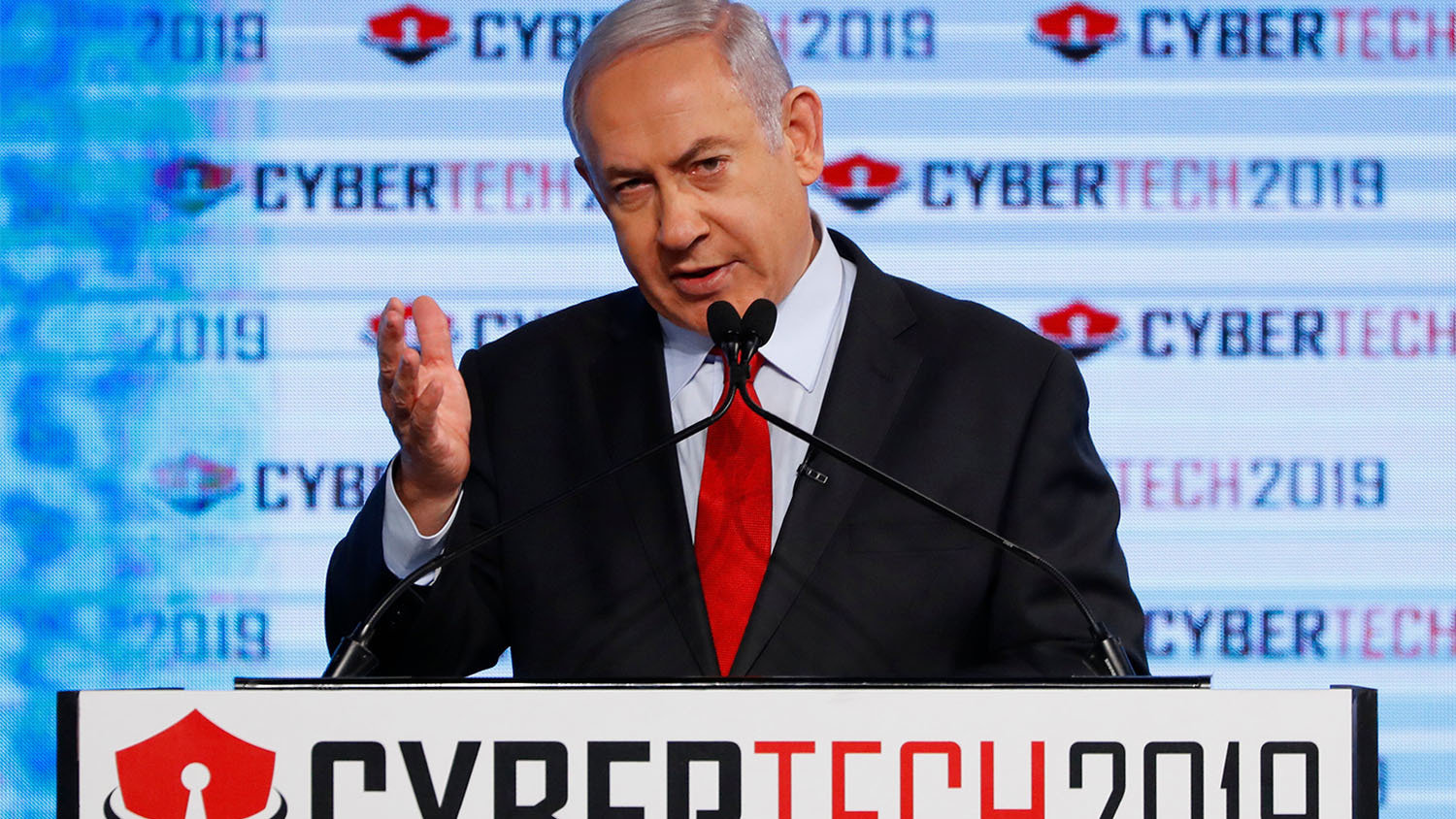 Israeli Prime Minister Benjamin Netanyahu delivers a speech during the CyberTech 2019 conference for the cyberindustry on January 29 in Tel Aviv. Netanyahu accused archfoe Iran of regularly launching cyberattacks on Israel, which the Jewish state manages to thwart with its “unmatched” cyberabilities.
JACK GUEZ/AFP/GETTY IMAGES

New figures released ahead of the CyberTech Conference in Tel Aviv from January 28–30 indicate that Israel received 20 percent of the overall cyberinvestments worldwide. Over the last year, cybersecurity investments in Israel surged by a record-breaking 47 percent.

Speaking at the conference, Israeli Prime Minister Benjamin Netanyahu noted that all of the top global technology companies have major offices in Israel, and many of those offices are larger than their headquarters offices. He said that Israel’s strength comes “because we have a defense industry that we use to leverage to civilian industry.”

Israel’s technological superiority was made possible because its government served as the catalyst. When the government founded the National Cyber Bureau in 2011, it had the “vision of placing Israel among the top five countries leading in the field within a relatively short number of years.” Israel managed this by using its military resources to improve private-sector and public-sector cybersecurity.

As Israel’s military becomes more digitalized, the threat of cyberattacks becomes a greater danger. This has made cybersecurity crucial for the Israel Defense Forces (idf).

Netanyahu touched upon one of Israel’s vulnerabilities. He said cyberattacks on aircraft come in “100 ways.” They come via “ground control, interference, they can be attacked by the systems within the plane, and the communications and many, many other things. It is in many ways right now the most vulnerable, dramatically vulnerable, system that we have.”

This should be disconcerting to many, because the Israel Air Force is universally recognized as one of the top six most powerful aerial fighting forces in the world. Israel prides itself on the efficiency and effectiveness of its technologically superior Air Force. One third of idf manpower is allocated to the Air Force.

Historically, Israel has relied heavily on its Air Force for victories, such as during the Six-Day War.

Who stands to take advantage of this vulnerability?

“Iran attacks Israel on a daily basis,” Netanyahu declared at the CyberTech Conference. “We monitor these attacks, we see these attacks, and we foil these attacks all the time. … They issued in the last 24 hours, threats that say that they’ll destroy us, they’ll target our cities with missiles. We’re not oblivious to these threats. They don’t impress us, because we know what our power is, both in defense and in offense.”

Iran [cyber]attacks Israel on a daily basis. We see these attacks and we foil these attacks all the time.
Iran threatens us in many other ways. They have issued in the last 24 hours threats that say that they’ll destroy us, they’ll target our cities with missiles. pic.twitter.com/xrhrbpxw2b

The FireEye report stated, “apt39 likely focuses on personal information to support monitoring, tracking, or surveillance operations that serve Iran’s national priorities.” apt39 has focused its activities in the Middle East. The Hill reported that “U.S. officials described in the report how Iran has sophisticated capabilities and could cause major disruptions for a large company.”

U.S.-based technology firm Vocativ released another report on January 31. The Times of Israel stated, “Hundreds of Iranian bots are working to increase social and political divisions among Israelis and drive a radicalization of political discourse online ahead of the country’s April 9 elections.” The report said it found at least 350 social media accounts were automated for this purpose. These bots have responded to events and news about the election in a way Vocativ said was focused on points of contention to “influence” the elections. One of the bots posted a “fake story falsely alleging former Israeli Defense Minister Avigdor Lieberman was a Russian spy.” Four Israeli journalists spread the story before it was exposed as false.

Last September, Israeli cybersecurity firm ClearSky uncovered three news outlets—one in Hebrew, two in Arabic—that appear to be fake and established to promote the Islamic Republic of Iran. ClearSky said the news outlets and fake social media accounts were a part of an Iranian “worldwide disinformation infrastructure that was set up over the years by the Iranians and includes over 100 active news and media sites in 24 countries and 29 languages.”

These daily attacks against Israel are only going to increase as Iran grows increasingly more powerful and more aggressive.

Since the 1990s, Watch Jerusalem editor in chief Gerald Flurry has forecast that Iran will use state-sponsored terrorism to eventually dominate the Middle East. Daniel 11:40 prophesies that a radical Islamist power, called “the king of the south,” will have a pushy foreign policy. Mr. Flurry has identified radical Islam, led by Iran, as this king of the south. (Request your free copy of The King of the South.)

I believe one key end-time Bible prophecy could well be fulfilled through … cyberterrorism: … “They have blown the trumpet, even to make all ready; but none goeth to the battle: for my wrath is upon all the multitude thereof” (Ezekiel 7:14). The trumpet of war is to be blown in Israel. … It seems everybody is expecting our people to go into battle, but the greatest tragedy imaginable occurs! Nobody goes to battle—even though the trumpet is blown! Will it be because of computer terrorism?

“And I will break the pride of your power; and I will make your heaven as iron, and your earth as brass: And your strength shall be spent in vain” (Leviticus 26:19-20).

Modern Israel, just like ancient Israel, is relying on its own military and its cyberdefenses to protect it, rather than looking to God for protection.

When the Arabs attacked Israel the day after it declared independence in 1948, the Jews did not have a trained military. Its soldiers were civilians with rifles. Israel had no military might to trust in. The people were forced to look to God, and He delivered them the victory. Not just once, but again in the Six-Day War and again in the 1973 Yom Kippur War.

Yet God still promises to deliver Israel. Notice Hosea 1:7: “But I will have mercy upon the house of Judah, and will save them by the Lord their God, and will not save them by bow, nor by sword, nor by battle, by horses, nor by horsemen.” This prophecy is for Israel in the end time (Hosea 2:21). God promises to once again save Israel, but not through its own military strength or technological advancements. God said He would take away its military might (Hosea 1:5). Instead, God will send the Messiah in all power, glory and divine force to establish a new world government (Daniel 2:44-45). He will come to Jerusalem upon the Mount of Olives (Zechariah 14:4) and declare to Israel: Ammi, meaning “my people” (Hosea 2:1).

For more information about the future of Israel and Jerusalem, request your free copy of Jerusalem in Prophecy, by Mr. Gerald Flurry.