UN peacekeepers fail to see that the real cause behind the conflict is Iran.
By Warren Reinsch • April 3, 2019 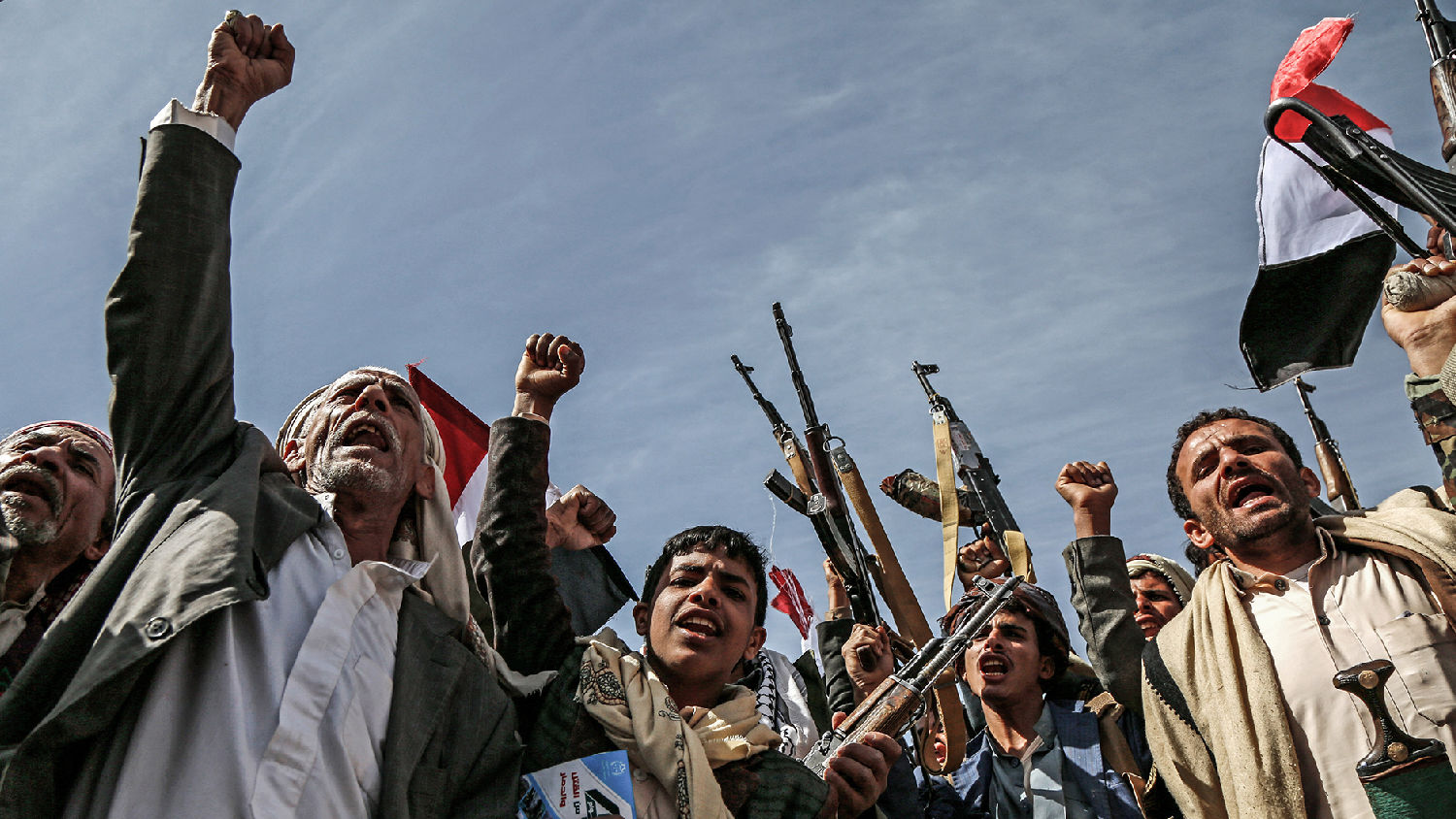 Yemeni men shout slogans during a rally organized by the Iran-backed Houthi rebels to commemorate the anniversary of the Saudi-led military campaign on Yemen.
GETTY IMAGES

On the fourth anniversary of the Yemeni civil war, tens of thousands of Yemenis waving the national flag gathered in the capital of Sanaa to show their support for the Houthi rebel movement. According to Deutsche Welle, protesters held placards calling for persistence against Saudi aggression and chanted slogans against Saudi Arabia and the United States.

According to Reuters, the protesters blame United States ally Israel for destroying their country. At the March 26 rally, massive speakers declared, “America and Israel, death and mutilation to you” and “Five or 50 years, we will face the criminal coalition.”

“This is a message to the world, that at the start of the fifth year (of the war), Yemenis will be stronger …, a message that the Yemeni resistance will be even greater,” said protester Mohammed Haidarah.

Saudi Arabia & its allies rejected Iran’s peace plan for Yemen in April 2015—claiming that victory was at hand within THREE WEEKS.

On the eve of the war’s shameful FIFTH YEAR, a reminder that it’s not too late to stop the nightmare that this war has become. #StopTheWarOnYemen

Meanwhile, the coalition accuses Iran of supplying Houthi rebels with drones, missiles and other weapons. Both Iran and the Houthis deny the allegation.

Results of the War

Alarmed by the rise of an Iranian proxy in their backyard, Saudi Arabia and eight other Arab states formed a coalition code-named Operation Decisive Storm on March 26, 2015, in an attempt to restore the Yemeni government that Houthi rebels had overthrown. Ever since, the Saudis have repeatedly launched air strikes against Houthi-controlled regions. Many in the international community accuse the Saudis of targeting hospitals, markets, residential areas and schools.

Saudi ambassador to the United States Adel al-Jubeir said on cbs’s Face the Nation that Saudi Arabia’s air strikes against Houthi rebels was a “war of necessity.”

On the morning of this year’s anniversary rally, at about 6:30, a missile hit a petrol station 164 feet from the entrance of a rural hospital in rebel-held northwestern Yemen, 40 miles from the city of Saada. According to bbc, the air strike killed at least eight people, five of them children.

Save the Children Fund, an international nongovernmental organization that helps support children in developing countries, reported on March 25 that Saudi-led air strikes in Yemen killed at least 226 children and injured an additional 217 in 2018. According to Amnesty International, these attacks have raised “concerns about compliance with the rules of international humanitarian law.”

Since the civil war began, over 2 million people have been displaced. Tens of thousands have died in the war that has driven the impoverished country to the brink of famine. The United Nations says that at least 7,025 civilians have been killed and 11,140 injured in the fighting. In addition, preventable causes such as malnutrition, disease and poor health have killed thousands of civilians. According to a Reuters report, about 80 percent of the population, approximately 24 million people, needs humanitarian assistance and protection. About 20 million need help obtaining food. Nearly 240,000 of them are facing “catastrophic levels of hunger.”

(For more information about the destructive effects of the Yemeni civil war, read our article “The ‘Utter Destructiveness’ of the War in Yemen.”)

So far, the UN-led negotiations have produced few tangible and significant results. “The peace process is currently at a deadlock while the war is deepening grievances, ripping the social fabric and shattering an already fragile state,” wrote the Guardian. Last December, UN members met with Houthi and Yemeni government representatives in Sweden to negotiate a ceasefire and withdrawal from the port of Hodeidah. Although both sides agreed on the terms, neither side kept its word and Hodeidah remains too insecure to send humanitarian supplies without Houthi rebels seizing them.

Ceasefires and political agreements between the Houthis and the Saudi-backed government have failed to take hold. The Yemeni government under President Abdrabbuh Mansur Hadi is unwilling to accept an end to hostilities with the current balance of power, and the Houthis are unwilling to give up the port at Hodeidah, through which it receives weapons shipments from Iran.

Even if the UN managed to enact a successful ceasefire, “no amount of aid will ever meet the exponentially growing humanitarian demands” (ibid). The UN has failed to take into consideration or ignored the critical role Iran plays in the conflict. (For more information about the failed attempt at peace in Yemen, read our article “Misguided Yemen Ceasefire: A Victory for Iran?”)

Iran: Instigator of the War

On January 18, an 85-page UN report said that Iran was illegally shipping fuel to Houthi rebels in order to finance its war against the Yemeni government.

After the UN examined the debris of three missiles launched at Saudi Arabia in March and April of last year, UN Secretary General António Guterres said they found “specific key design features consistent with those of the Iranian Qiam-1 short-range ballistic missile.”

In his June 2018 report, Guterres noted the debris from five missiles fired at Saudi Arabia “share key design features” with Iranian missiles. Some components were manufactured in Iran.

Debris from five missiles fired at #KSA by Yemen’s Houthis since July 2017 “share key design features with a known type of missile” manufactured by #Iran and some of the components were manufactured in Iran: Guterres report https://t.co/OBTYtdkfNg pic.twitter.com/ZLGRNdKAJr

In Libya and Ethiopia in Prophecy, Watch Jerusalem editor in chief Gerald Flurry writes, “Yemen is already infested with terrorists. It is located on the Red Sea and the Gulf of Aden—and is another strategically powerful country if you are trying to control world trade.” That is exactly Iran’s strategy.

A prophecy in the book of Daniel names “the king of the south” as a major world power in the last days. Mr. Flurry identifies the king of the south as radical Islam, led by Iran, in his booklet The King of the South (request your free copy). The booklet reports how Iran became dominant through its policy of state-sponsored terrorism, primarily through supporting its various proxy groups.

“And at the time of the end shall the king of the south push at him …” (Daniel 11:40). Mr. Flurry writes in The King of the South, “[Iran] is always pushy in its foreign policy. It pushes until it starts a war. Having such power means that it must be a large oil-producing country.” But who does Iran push at?

Yemen borders the Bab el-Mandeb strait. This waterway is a vital shipping route, facilitating roughly 4.8 million barrels of oil and petroleum per day in 2016, according to the Energy Information Administration. More than half of that sailed north into the Mediterranean Sea toward Europe and North America.

One aspect of Iran’s “push” is its choke hold on sea gates like the Bab el-Mandeb. If Iran were to gain control of this shipping lane and stop all transit, trade vessels would have to reroute around the southern tip of Africa. This would cause oil prices to skyrocket around the world, especially in Europe. The Continent relies on petroleum products from the Middle East, a large portion of which travels through the Bab el-Mandeb.

As the war in Yemen rages on, continue to watch for the Houthis to become more entrenched in Yemen, providing Iran a launching pad to impact global trade. The Houthis appear to be there to stay.