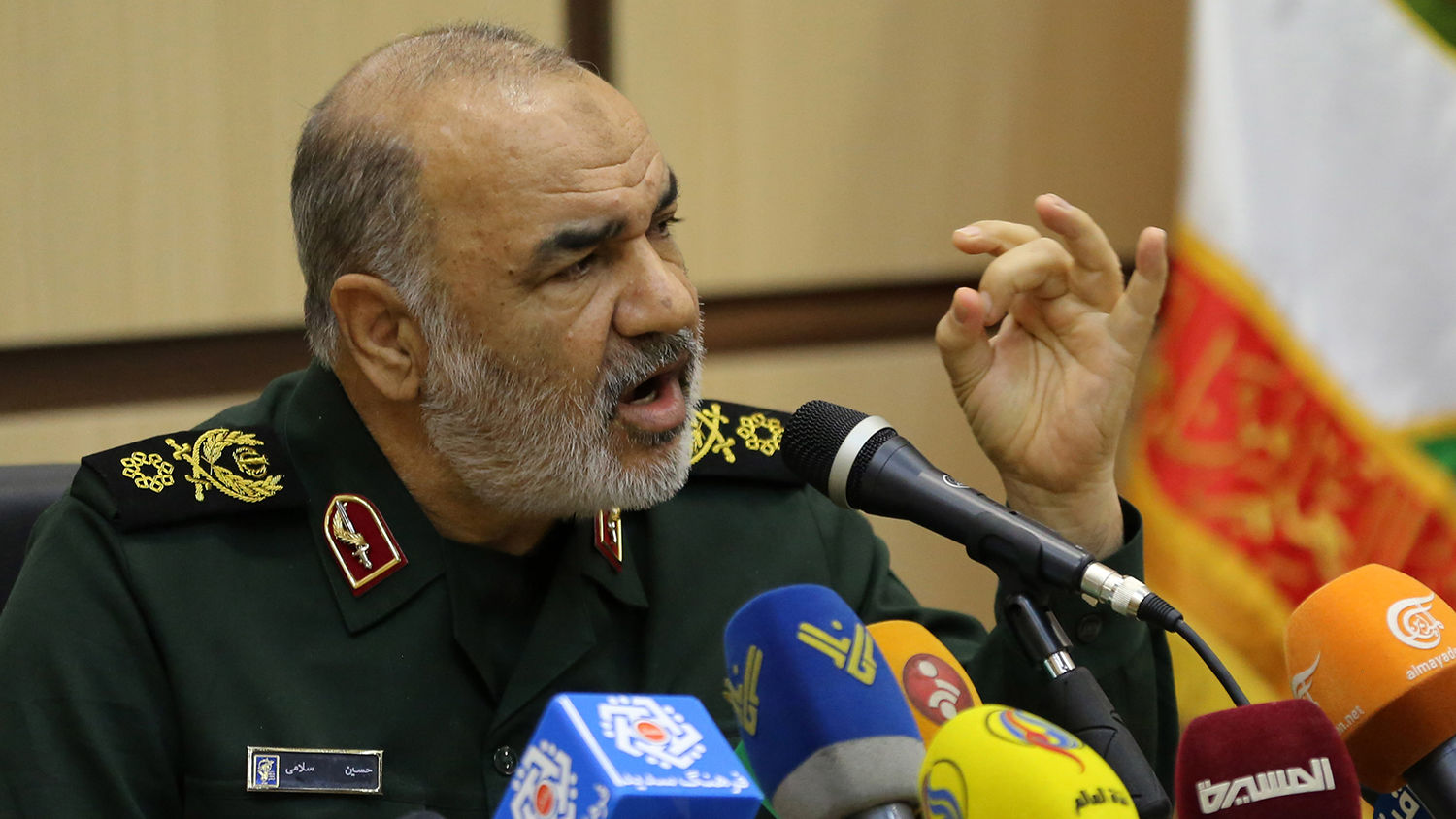 The appointment was praised by several Iranian state news agencies and occupied the top five spots on Iran’s government-controlled Tasnim News Agency website, which declared the new appointment a “message to our enemies.”

Salami has frequently vowed to destroy Israel and the United States. He has said that Iran’s strategy is “to erase Israel from the global political map,” that Iran will unleash an “inferno” on the Jewish State, and that he was “planning to break America, Israel” and “cleanse the planet from the filth of their existence.”

Yesterday, #Iran appointed THIS man to be the new commander of the #IRGC. Recently, Maj. Gen. Hossein Salami called to “cleanse the planet from the filth of the existence” of the US, Israel, their partners & allies. To many of those reading this, that means you. pic.twitter.com/odOda8yVez

Salami has warned Israel not to “play with fire” because a war with Iran “will result in Israel’s defeat within three days” before the U.S. can intervene. While Iran waits out the Trump administration, the war is mainly a war of words. Who better to lead the charge than Hossein Salami?

Salami’s appointment as new commander in chief of the irgc is a clear statement from the ayatollah that Iranian aggression is ramping up.

According to al-Monitor’s translation, the Jahan newspaper wrote that Iran is entering a new era of “more clear confrontation” with the U.S. and Israel.

The irgc was created during the 1979 Islamic Revolution to defend its Islamic tenants. It continues to exist separate from the Iranian military, which is controlled by Iran’s parliament. The irgc answers directly to the supreme leader. Despite its original purpose as a sort of national guard, fulfilling the will of the ayatollah over the last four decades has meant that the irgc’s role has expanded to operate outside of Iran throughout the Middle East and Africa.

The 20-year-old Salami joined the irgc during the Iran-Iraq War when former Iraqi President Saddam Hussein ordered the invasion of Iran in 1980. Throughout the eight-year war, Salami was an officer in the 2nd Karbala Brigade, which later was selected in a military reorganization to be the special forces 25th Karbala Division, known as the “Black Scorpion” to Iraqi generals. After the war, Salami continued his studies and graduated with a master’s degree in defense management. He later held many prominent positions in the irgc as deputy chief of staff, commander of the irgc Aerospace Force, and since 2009, deputy commander of the irgc.

“Salami’s past experience leading the ircg’s Aerospace Force is sure to feature in future rhetoric and policy by the irgc on missiles,” Bhnam Ben-Taleblu, a senior analyst at the Foundation for Defense of Democracies (fdd), told the Jerusalem Post. He added that “in Syria, the irgc is helping increase building missile factories and depots, as well as using the cover of the war to help improve Lebanese Hezbollah’s rocket and missile force.”

“If the Iranians decide to attack Israel, they will probably use missiles,” writes Hirsh Goodman in The Anatomy of Israel’s Survival. Over the past year, Iran has significantly improved its ballistic missile capabilities, which include retrofitted precision-guided missiles that accurately hit targets in Iraq and Syria. Iran gave these retrofits to its Lebanese proxy, Hezbollah. Iran also developed ballistic missiles capable of carrying multiple warheads and reaching parts of Europe. Most recently, it has improved its long-range cruise missiles. Salami’s appointment could lead to even more aggressive ballistic missile development, which will push the Middle East closer to military conflict.

#TBT: IRGC Deputy Commander Hossein Salami Threatens to Annihilate Israel, Adds: Our Influence in the Region Is Based on a Spirit of Jihad That the People Relate to; We Can Expand Our Missile Force in Accordance With Our Military Strategy (Feb. 2, 2019) https://t.co/8084nTVbZQ pic.twitter.com/0oUXUnFRN7

“Of all the existential threats Israel faces, Iran is at the top of the list. Iran is maniacally dedicated to Israel’s destruction,” Goodman writes (ibid).

“This is an ideology that embraces death,” writes Trumpet editor in chief Gerald Flurry in The King of the South. “The blatantly bold and aggressive foreign policy of Iran must lead to war. It will either conquer or be conquered.” In this booklet, first printed in 1996, Mr. Flurry pinpoints Iranian-led radical Islam as the “king” of the Middle East. He first made this forecast in 1992, when everyone viewed Saddam Hussein as the leader in the Middle East. How was Mr. Flurry able to make such an accurate forecast? Because he based it on Bible prophecy.

“And at the time of the end shall the king of the south push at him …” (Daniel 11:40). Mr. Flurry identifies radical Islam, led by the Islamic Republic of Iran, as the biblically prophesied “king of the south.” (For proof, request your free copy of The King of the South.)

This “is an end-time prophecy,” Mr. Flurry writes. “It is about a nation that is always pushy in its foreign policy. It pushes until it starts a war. … Who else could it be in this end time but Iran? Iran is extremely radical—the king over radical Islam. Where is this nation’s pushiness leading? To war!” (ibid).

Goodman writes, “Iran’s regime is based on brute power.” It is also a nation that doesn’t act rationally. It is a force that pushes.

Middle Eastern nations have a tendency “to blame outside forces for the problems of their region,” writes Lee Smith in The Strong Horse. Iran sees the evils coming out of the end-time nations of ancient Israel today and blames Israel for spreading those problems to Iran.

Salami declared: “[C]onsidering the evil that Israel is doing, it is bringing itself closer” to its destruction.

In his book, Goodman notes that Israel’s “ingenuity” and “cutting edge” is its strength. In reality, Israel has become self-reliant and no longer trusts God.

Mr. Flurry writes in his free booklet Jerusalem in Prophecy: “We are weak because God has broken our will to fight and win. We now want to trust others to protect us, because we cringe in fear before our enemies. We no longer trust God! Our sins are destroying us.”

“Cast away from you all your transgressions, whereby ye have transgressed; and make you a new heart and a new spirit: for why will ye die, O house of Israel?” (Ezekiel 18:31).

Mr. Flurry continues: “All this suffering could be eliminated. Because of our sinful attitude, our people refuse to obey God. So we must suffer until we change that attitude. … Judah has become vulnerable to the enemy, with very little freedom to strike back.”

No nation is in a worse position “to suffer irreparable damage if attacked with nuclear weapons” than Israel, writes Goodman. Due to its politics, technology and geography, “Israel cannot attack Iran without coordination with the United States.” Israel’s military power has been sapped. Though it has significantly stronger and technologically superior weapons than Iran’s, its will to fight has been broken. “And I will break the pride of your power; and I will make your heaven as iron, and your earth as brass: And your strength shall be spent in vain …” (Leviticus 26:19-20).

With Salami now at the helm of the irgc, watch for Iran to become more aggressive against Israel and the United States, referred to by Iranians as the “little Satan” and the “great Satan.” Salami is known to be a fiery mouthpiece of Iran. Now that the ayatollah has placed him in command of the irgc, watch for him to add bite to his bark.

Bible prophecy reveals that Iran’s radical thinking will lead to increased terrorism, which will trigger a third world war.

But there is hope.

In the middle of this destructive war, God will send the Messiah in all power, glory and divine force to Jerusalem to establish a new world government (Daniel 2:44-45).

“And I will bring them, and they shall dwell in the midst of Jerusalem: and they shall be my people, and I will be their God, in truth and in righteousness” (Zechariah 8:8). He will put an end to all tyrannical regimes, and finally, there will be global peace under one world-ruling government.

For more information about the end-time events surrounding Jerusalem and the coming of the Messiah, request your free copy of Jerusalem in Prophecy, by Gerald Flurry.