Battle of Influence in Syria: Russia Vs. Iran

Conflicting goals in Syria could push the nation away from Iran.
By Michael Davis • May 1, 2019 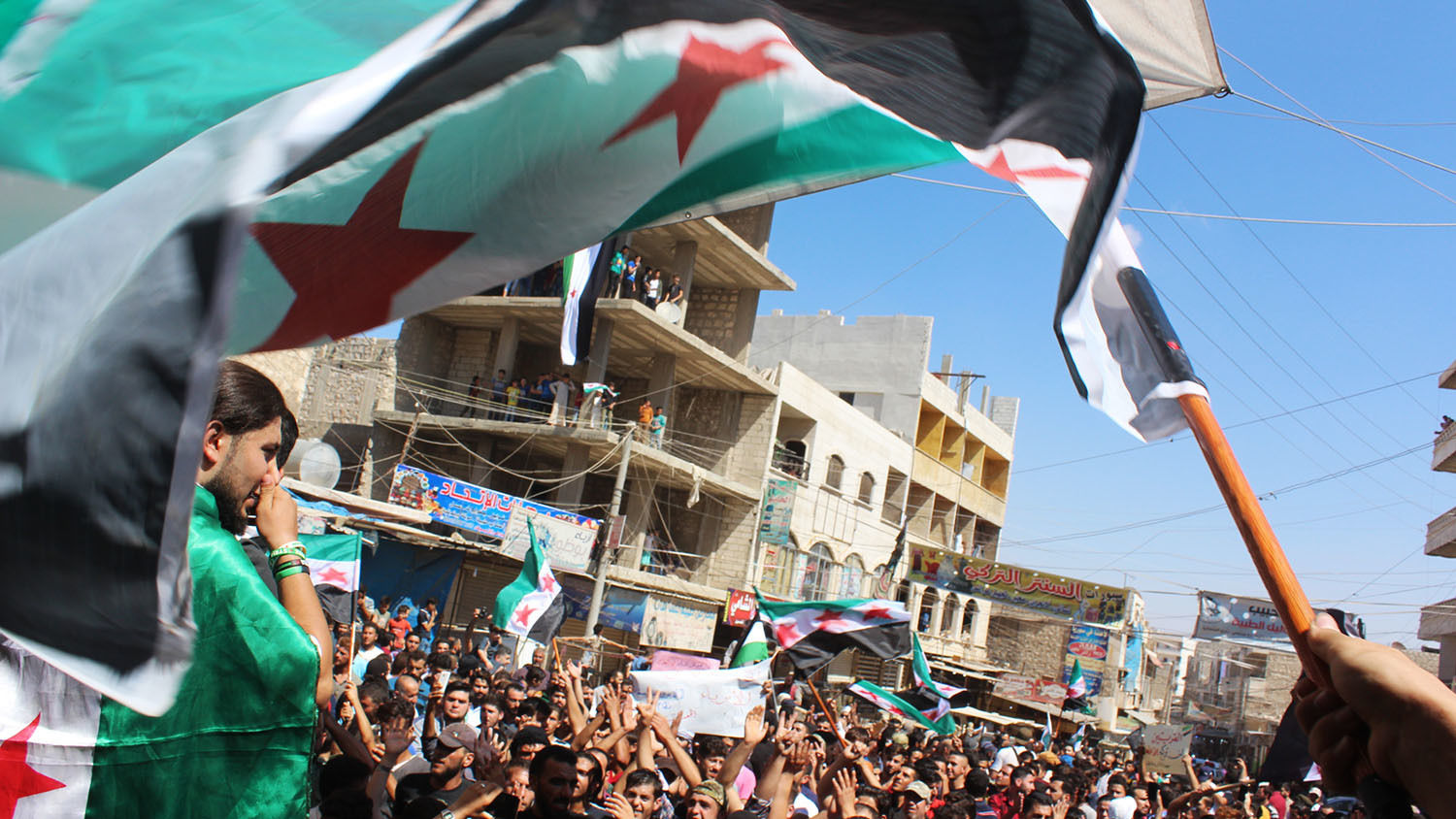 Syrians gather after Friday prayers in the town of Marratinuman of Idlib to hold an anti-regime protest against regime forces’ possible attacks on Idlib, Syria, on Sept. 7, 2018.
MUHAMMED EBU NECIM/ANADOLU AGENCY/GETTY IMAGES

Russia and Iran may have fought on the same side in Syria’s civil war, but that does not mean they see eye to eye. The two nations are struggling for superiority over the strategic Mediterranean state, and the fight recently broke out into the open.

According to Syrian news site Syria Call, nearly a dozen people were killed and about a dozen wounded in clashes between pro-Russian and pro-Iranian militia groups on April 14. Besides militants, women and children were also among the casualties.

The clashes, centered in Aleppo, involved the use of heavy weaponry and rockets that hit a civilian neighborhood and marketplace.

Middle East Monitor said that Iran has accused Russia of helping Israel push Iran out of Syria. In truth, Russia has done nothing to stop Israel’s air strikes against Iranian targets.

It is in both Russia’s and Iran’s national interest to keep the current regime in power, and both want compensation for their efforts to do so. Iran wants a land bridge to the Mediterranean Sea, and it has already made strides to acquire its first port on that body of water. It also wants an uninterrupted connection through Iraq and Syria to Lebanon and its terrorist proxy, Hezbollah. In addition, Iran could use Syria itself as a launching pad to attack Israel. It demonstrated this capability when it launched a missile from Syria toward Israel’s Golan Heights.

Russia has secured the rights to natural resources, such as gas and oil, in Syria. It also wants a military presence on the Mediterranean. In 2018, Russia extended its lease of the Hmeimim air base in Syria for nearly 50 years.

What both powers need to achieve their goals is regional dominance. And Syria isn’t big enough for the two of them.

Russia’s and Iran’s support of the Assad regime hardly extends to any broader cooperation in the region. Russian President Vladimir Putin has made it clear that he wants Russia to be the only power player in Syria. Israeli Prime Minister Benjamin Netanyahu said after his February meeting with the Russian president that Putin wants all Iranian troops out of Syria.

But it will take some drastic changes for Iran to abandon its regional goals and pull out of Syria.

Drastic changes are exactly what we should expect!

In 2012, Watch Jerusalem editor in chief Gerald Flurry wrote in “How the Syrian Crisis Will End,” “Right now, Syria is Iran’s most important regional ally. But that is about to change.”

In that article, Mr. Flurry discussed a prophecy found in Psalm 83: “For, lo, thine enemies make a tumult: and they that hate thee have lifted up the head. … For they have consulted together with one consent: they are confederate against thee: The tabernacles of Edom, and the Ishmaelites; of Moab, and the Hagarenes; Gebal, and Ammon, and Amalek; the Philistines with the inhabitants of Tyre; Assur also is joined with them: they have holpen the children of Lot. Selah” (verses 2, 5-8).

This passage lists a group of nations that will form an alliance within just a few years. A study into the identities of these peoples shows that Edom and Amalek refer to the modern nation of Turkey, while the Ishmaelites are Saudi Arabia and its neighboring Gulf states. Moab and Ammon both refer to Jordan, and Gebal is Lebanon. The “inhabitants of Tyre” also refers to Lebanon, and the Philistines mostly lived in the region now known as Gaza. The Hagarenes are the modern-day people of Syria. Assur is the ancient name for the people who make up the German nation today.

Notice, there is no mention of Iran in this verse. All these Middle Eastern nations are allied with Germany. A prophecy in Daniel 11 reveals that Germany will be in deadly opposition to Iran!

As Iran pushes at Europe, largely through the use of Islamic terrorism, Germany will lead Europe in utterly crushing Iran and its allies! At that time, Germany will cement its alliance with the nations mentioned in Psalm 83.

This is the future that Syria’s crisis is leading to.

Russia’s opposition to Iran’s continued military presence in Syria could help undermine the nation’s allegiance to Iran. Contrary to Putin’s wishes, though, the vacuum left by Iran will ultimately be filled by Germany, not Russia.

For a complete picture of Syria’s future and the prophecies in Daniel 11 and Psalm 83, please read Mr. Flurry’s article “How the Syrian Crisis Will End.”