Archaeological and historical evidence of another ‘almost’ discovered biblical figure.
By Warren Reinsch • May 14, 2019 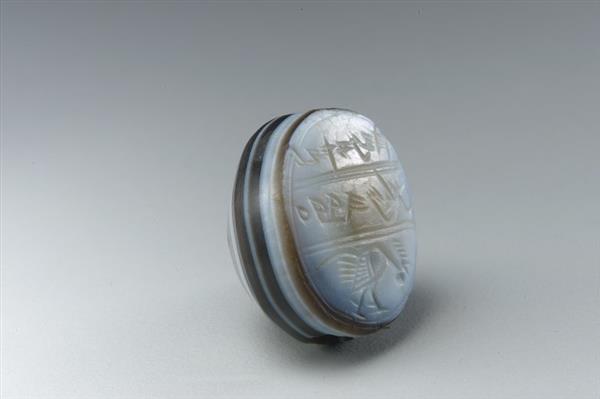 While excavating a tomb at Mizpah in 1932, the Pacific School of Religion of Berkeley, under the direction of archaeologist William Frederick Bade, uncovered a beautifully finished black-and-white onyx seal bearing the inscription “Belonging to Jaazaniah, servant of the king.”

The inscribed seal dates to roughly a year before King Nebuchadnezzar’s conquest of Jerusalem circa 586 b.c.e. Nebuchadnezzar carried away many captives to Babylon, but some Jews remained in the land. “And as for the people that were left in the land of Judah, whom Nebuchadnezzar king of Babylon had left, even over them he made Gedaliah the son of Ahikam, the son of Shaphan, governor” (2 Kings 25:22; Jerusalem Publication Society).

As governor, Gedaliah established an administrative center in Mizpah, approximately 12 kilometers (7.5 miles) north of Jerusalem. Mizpah had been an extremely important city in Judea. Years prior, King Asa had fortified the city to defend against incursions by King Baasha of the northern kingdom of Israel (1 Kings 15:22; 2 Chronicles 16:6). Biblical Archaeology Society wrote that there was a “dramatic change in Mizpah’s function, from border fortress of a small hill country kingdom to the center of a minor district in a large empire.” The old ring-road settlement was filled in, and small houses along narrow roads were replaced by larger four-room dwellings at least twice the size of their predecessors.

“Now when all the captains of the [Jewish] forces, they and their men, heard that the king of Babylon had made Gedaliah governor, they came to Gedaliah to Mizpah …” (2 Kings 25:23; jps). A number of officers went before the new governor to express their allegiance. Among these officers was the biblical Jaazaniah: “even Ishmael the son of Nethaniah, and Johanan the son of Kareah, and Seraiah the son of Tanhumeth the Netophathite and Jaazaniah the son of the Maacathite, they and their men” (verse 23; jps).

The officers warned Gedaliah of a plot to kill him, but he dismissed their cautions (Jeremiah 40:13-14). He was subsequently assassinated with “the Jews and the Chaldeans that were with him at Mizpah” (2 Kings 25:25; jps). It is possible that Jaazaniah was among those slain in the assassination. Jaazaniah’s seal was found in a reused Iron Age tomb on the western necropolis at Mizpah, indicating the seal was buried with him after his death.

However, it is also possible that Jaazaniah escaped Ishmael’s killings, and could be the same man mentioned in Jeremiah 42:1 as fleeing to Egypt with the remaining Jews.

The onyx seal is divided into three sections. The top register of the seal says, “Belonging to Jaazaniah,” and the middle register says, “servant of the king.” The phrase eved hamelech, “servant of the king,” is a biblical phrase used in 2 Kings 25:8 along with the phrase “captain of the guard,” titles that could have been used interchangeably—thus fitting with Jaazaniah’s distinction as some kind of “captain” in verse 23.

The bottom third register has a picture of a fighting rooster. There are no references to chickens in the Hebrew Bible, but the seal indicates they were present in Judea by at least the seventh century b.c.e. It seems probable they were imported from East India by Solomon’s fleet who traveled to Ophir—one theory is that this biblical location refers to India (1 Kings 9:26-28). Archaeologist William Frederick Bade writes in his book A Manual of Excavation in the Near East, ”In any event, the fighting cock was an appropriate symbol on the seal of a soldier”—additional support that the Jaazaniah seal matches with the biblical record.

Lawrence Mykytiuk, in his Biblical Archaeology Society article “53 People in the Bible Confirmed Archaeologically,” wrote: “There are, then, only two [out of three necessary] identifying marks of an individual that clearly connect the seal’s Jaazaniah with the biblical one.” As such, we cannot be absolutely certain that this seal belonged to a biblical Jaazaniah (of which either four or five different individuals are described in the biblical text). However, the evidence strongly indicates that this was the biblical captain Jaazaniah described in the verses above.

Many of these “almost”-discovered biblical figures exist. While the weight of archaeological evidence points to their existence, they are often missing an element such as a title, father’s name, or even just a single letter. For more information about these “nearlies,” read our article “Inscriptions: The Biblical Figures That Nearly Were.”

For more of our archaeological content, visit our archaeology page to stay up-to-date with new discoveries and new analysis on “old” discoveries such as this seal. And for more information about the authenticity of the Bible, as is being repeatedly proved through this field of science, please request your free copy of The Proof of the Bible.