New archaeological discovery in Jerusalem adds to evidence of King Josiah’s reign.
By Brent Nagtegaal • May 28, 2019 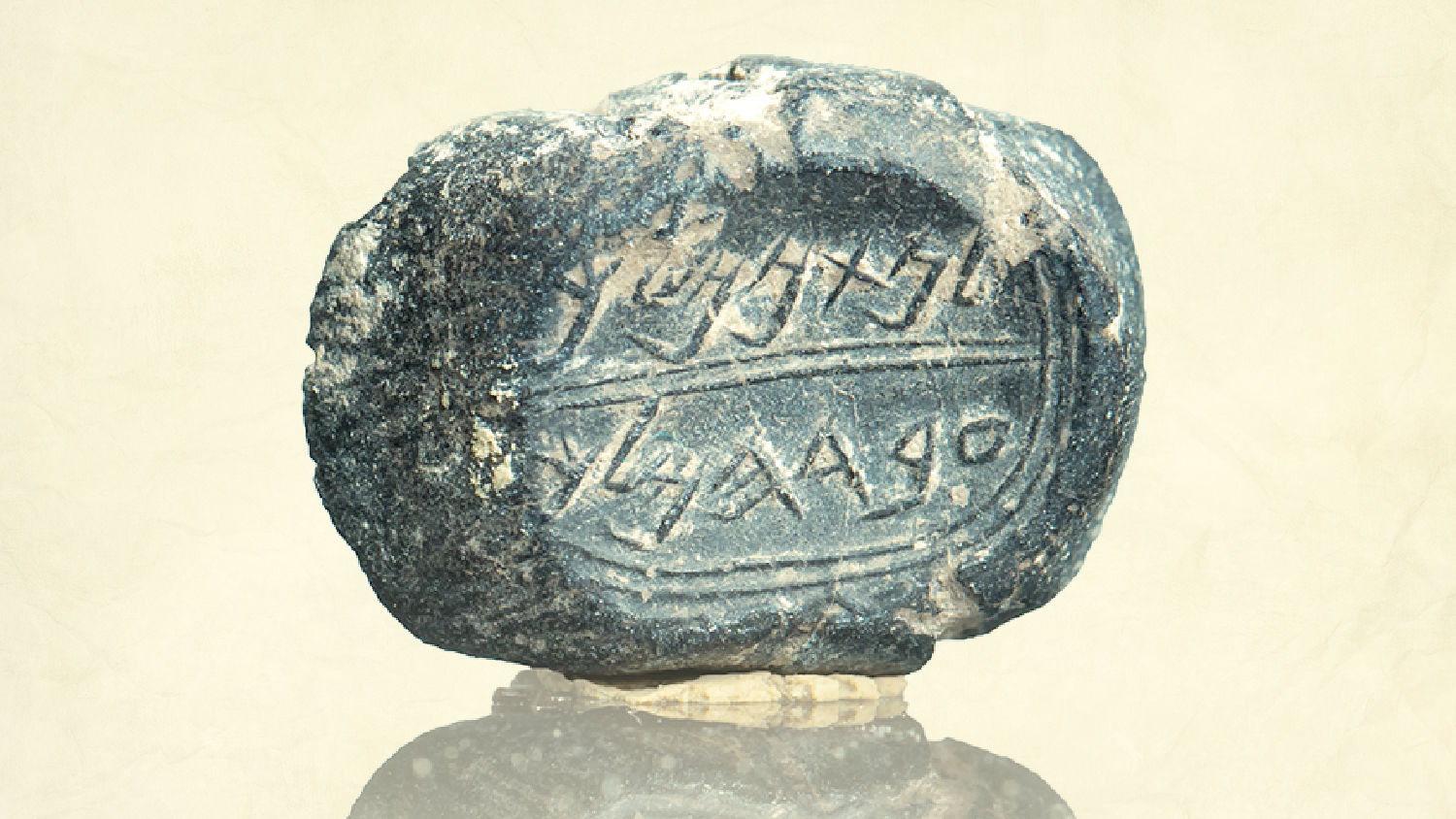 The Nathan-Melech bulla adds evidence to the authority of the Bible.
ELIYAHU YANAI, CITY OF DAVID

Jerusalem
He was king when the kingdom of Judah experienced its last gasp of freedom. His demise was the death knell of the kingdom. Now, archaeological discoveries in and around Jerusalem are breathing life into the epic reign of King Josiah. The most recent evidence proving Josiah’s reign and the biblical record is a seal impression bearing the name of Nathan-Melech.

Dr. Yiftah Shalev, codirector of the Jerusalem excavation that uncovered the artifact, told Watch Jerusalem in early April, “It’s a relatively rare name. It’s the first time that it was found on any document outside the Bible. … In the Bible itself, it’s mentioned only once.”

That record is found in 2 Kings 23:11: “Then he removed the horses that the kings of Judah had dedicated to the sun, at the entrance to the house of the Lord, by the chamber of Nathan-Melech, the officer who was in the court; and he burned the chariots of the sun with fire” (New King James Version).

Normally, archaeologists find clay seal impressions only after putting excavated earth into a sieve, spraying it with water, and closely inspecting the contents that remain. Surprisingly, the seal of Nathan-Melech, which measures just over 1 centimeter in diameter, was discovered in the archaeological field. A worker discovered the bulla while excavating through a destruction layer of a public building constructed in the eighth century b.c.e. and destroyed during the Babylonian siege of Jerusalem in 585 b.c.e. Shalev and codirector Yuval Gadot from Tel Aviv University were able to immediately read the ancient Hebrew inscription and recognize its significance.

Listen to the interview with Dr. Yiftah Shalev

The bulla records both Nathan-Melech’s name and his title: “Servant of the King.” Shalev explains that this means “this person was a high official in the court.” This title equates to “the officer who was in the court,” mentioned in 2 Kings 23:11.

Shalev said that all the necessary elements are present to confirm “it is likely” that this seal impression belonged to the man mentioned in the Bible.

The discovery of the Nathan-Melech bulla adds one more archaeological confirmation of the biblical account of King Josiah’s reign.

The start of Josiah’s reign in 640 b.c.e. was a difficult time. Eighty years prior, the Assyrian Empire had conquered and taken captive the kingdom of Israel, just to the north of the kingdom of Judah. At about the same time, Josiah’s grandfather, King Manasseh, had subjected Judah to the Assyrians. The biblical record of Manasseh’s deference to Assyria is confirmed by a clay prism of the Assyrian King Essar-Haddon.

The Bible describes Manasseh’s reign as a time of rampant idolatry and pagan worship, which continued into the reign of Josiah’s father, Ammon. After just two years, the people of Judah replaced Ammon with his 8-year-old son Josiah. At this time, the Assyrian Empire was waning, and the Babylonian Empire was rising. During this time of upheaval, Josiah enacted one of the most thorough religious revivals in Judah’s history.

The book of Chronicles describes how during the 12th year of his reign, Josiah continued to purge paganism even beyond Judah’s northern border, entering the territory of the former kingdom of Israel and destroying centers of pagan worship. “And in the cities of Manasseh, Ephraim, and Simeon, and as far as Naphtali, in their ruins all around, he broke down the altars and beat the Asherim and the images into powder and cut down all the incense altars throughout all the land of Israel. Then he returned to Jerusalem” (2 Chronicles 34:6-7; English Standard Version).

Amid this revival, Josiah expanded Judah’s territory north and west. Archaeology supplies evidence of this expansion.

In 1960, a fortress from the time of Josiah was uncovered on the Mediterranean coast, just south of Tel Aviv. Most archaeologists acknowledge that the site is Judaean. Hebrew inscriptions and Judaean material found at the site are proof that it was a part of King Josiah’s expansion of the kingdom.

An inscription found at the site testifies that the residents kept the Sabbath—the oldest extra-biblical reference outside the Bible and further proof of Josiah’s religious reforms. The inscription, found on a discarded piece of pottery, confirms not only that Josiah took over this territory, but also that he enforced the biblical Sabbath command. The inscription also refers to the biblical law that outlaws keeping a person’s clothing as collateral past sundown (Exodus 22:26-27):

Bulla of Gemariah, Son of Shaphan

In the 18th year of his reign, King Josiah turned his attention to restoring the temple in Jerusalem. While cleaning the temple, the high priest discovered an ancient manuscript of the book of the law. The Bible records that Shaphan the scribe took the manuscript to King Josiah. One generation later, Shaphan’s son Gemariah continued in the family occupation of serving as a royal scribe (Jeremiah 36:10).

In the 1980s, in a City of David excavation just 100 meters from where the Nathan-Melech bulla was found, Yigal Shiloh found a stash of over 50 preserved clay seal stamps. One bulla bore the inscription: “Belonging to Gemariah, son of Shaphan.” This man was a scribe mentioned together with his father in Jeremiah 36. Like Nathan-Melech, the bulla lay in the ash and debris dating to the Babylonian destruction of Jerusalem (586-585 b.c.e.), which helped match the bulla to the biblical figure. This was the first bulla found in the City of David that can be conclusively attributed to an individual in the Bible.

The same year that Shaphan the scribe read the book of the law to King Josiah, the king restored to its rightful use an area in the temple precinct that had been used to shelter chariots and horses used in sun worship. The Bible records this as “the entrance to the house of the Lord, by the chamber of Nathan-Melech …” (2 Kings 23:11; nkjv). Evidence of this aspect of Josiah’s religious revival is found in the Ketef Hinnom Scrolls.

In 1979, during archaeological excavations on the edge of the Valley of Hinnom, not far outside ancient Jerusalem’s walls, a large treasure cache was found in a burial tomb by the team of Prof. Gabriel Barkay. The cache included two tiny scrolls made of 99 percent pure silver. They were painstakingly opened in a laboratory, and measure about four inches by one inch when unrolled. The inscriptions feature portions of Scripture. One of the amulets reads, “May Yahweh bless you and keep you. [May] Yahweh make [his face] shine.” Numbers 6:24-25 read, “yhvh bless thee, and keep thee; yhvh make His face to shine upon thee …” (Jewish Publication Society).

By studying the artifacts around them, scientists have dated the scrolls to the late-seventh to early-sixth century, somewhere between 650 b.c.e. and 585 b.c.e. Bible critics say this is improbable, as the Bible supposedly wasn’t finished and distributed until the second and third century. But technological advances in recent years have made it possible to confirm the scrolls’ creation more specifically to the seventh century. New high-definition photographs were examined by four scholars of four different institutions who concluded that the new techniques enabled them to “reaffirm with confidence that the late pre-exilic period is the proper chronological context for the artifacts.” Thus, they predate the earliest of the Dead Sea Scrolls by 400 years, making them the oldest biblical texts ever found.

Clay seals, clay prisms, seaside fortresses and silver scrolls: all archaeological discoveries confirming the accuracy of Bible history from more than 2,600 years ago. These discoveries from King Josiah’s time prove that the Bible is not a collection of man-made fairy tales, concocted by Jewish scribes writing hundreds of years after the fact. Rather, it is an accurate account of history, continuing to be proved by an ongoing stream of archaeological discoveries.