An inscription that confirms the biblical account of Ahaz’s tribute to Tiglath-Pileser iii
By Warren Reinsch • June 5, 2019 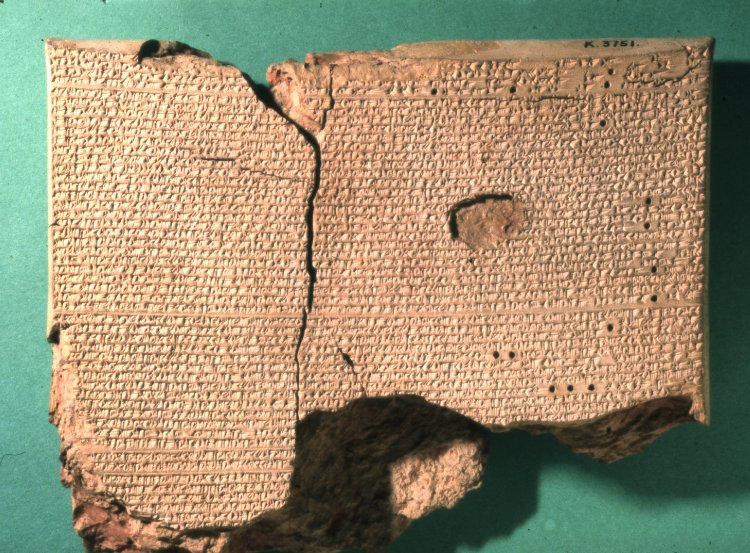 Discovered in 1873 by Austen Henry Layard in the ancient Assyrian palace of Nimrud, the Tiglath-Pileser iii Summary Inscription Seven lists numerous conquests and building operations of one of Assyria’s most powerful kings, reigning from circa 745 to 727 b.c.e. And the 24 x 19 centimeter clay tablet, dating to circa 729 b.c.e., contains the first known extra-biblical proof of Ahaz, king of Judah.

King Ahaz was 20 years old when he began to reign (circa 735 b.c.e.), and was on the throne for 16 years. The Bible states that Ahaz “did not that which was right in the sight of the Lord his God,” but instead he made idols, sacrificed his children to Molech, and observed pagan rituals (2 Kings 16:1-4; 2 Chronicles 28:1-4). As a result of his sins, God caused the surrounding nations to rise up and form a confederation against Judah.

Both king Rezin of Syria and king Pekah of Israel came and besieged Jerusalem, but could not break through the city walls. Instead, they moved south toward Elath and joined forces with the Edomites. “At that time Rezin king of Aram recovered Elath to Aram, and drove the Jews from Elath; and the Edomites came to Elath, and dwelt there, unto this day” (2 Kings 16:6; Jerusalem Publication Society). The Philistines also invaded Judah’s cities in the south: Beth-shemesh, Ajalon, Gederoth, Shocho, Gimzo and the mining region of Timnah.

Judah found itself surrounded. As a result of the invasions, it suffered great losses. “For Pekah the son of Remaliah slew in Judah a hundred and twenty thousand in one day, all of them valiant men” (2 Chronicles 28:6; jps). The inhabitants of Judah were experiencing this suffering “because they had forsaken the Lord, the God of their fathers.” God “brought Judah low because of Ahaz … for he made Judah naked, and transgressed sore against the Lord” (verse 19; King James Version).

The Tribute of Ahaz

At that time, King Ahaz sought help from the Assyrians. He sent messengers to King Tiglath-Pileser iii, saying, Come up, and save me out of the hands of my enemies. “And Ahaz took the silver and gold that was found in the house of the Lord, and in the treasures of the king’s house, and sent it for a present to the king of Assyria” (2 Kings 16:8; jps).

This tribute that Ahaz took from the temple is confirmed by the discovery of Summary Inscription Seven from Tiglath-Pileser’s palace. Part of the inscription reads:

From these I received tribute … Sanipu of Ammon, Salamanu of Moab, … Mitinti of Ashkelon, Jehoahaz [Ahaz] of Judah, Kaush-malaku of Edom, … Hanno of Gaza … including gold, silver, iron, fine cloth and many garments made from wool that was dyed in purple … as well as all kinds of lavish gifts from many nations and from the kings that rule over them.

The inscription uses Ahaz’s full name, Jehoahaz, whereas the Bible uses the short form, Ahaz. The text parallels the biblical account, in both tribute and specific materials that Ahaz sent to Tiglath-Pileser. It also describes the Assyrian king receiving tribute from many kings who were in the confederation against Israel—this indicates that after receiving Ahaz’s request for help, Tiglath-Pileser led a military campaign to conquer these different peoples attacking Judah. The Bible states that Tiglath-Pileser attacked King Rezin of Syria and took away many captives (verse 9). The Annals of Tiglath-Pileser mention the Assyrian king receiving tribute from Rezin.

Another artifact, Summary Inscription Four (circa 730 b.c.e.), confirms Tiglath-Pileser’s conquest of the northern kingdom of Israel. Since its discovery, the clay inscription has been lost; however, Layard made a paper mache imprint, known as a squeeze, before its disappearance. The inscription reads:

Israel … All its inhabitants (and) their possessions I led to Assyria. They overthrew their King Pekah and I placed Hoshea as king over them. I received from them 10 talents of gold, 1,000 talents of silver as their [tri]bute, and brought them to Assyria.

This inscription confirms several details in the biblical account. “In the days of Pekah king of Israel came Tiglath-pileser king of Assyria, and took [numerous Israelites cities], and carried them captive to Assyria. And Hoshea the son of Elah made a conspiracy against Pekah the son of Remaliah, and smote him, and slew him, and reigned in his stead” (2 Kings 15:29-30). It is possible that Hoshea colluded with Tiglath-Pileser to replace King Pekah.

These Summary Inscriptions add to the expanding fund of discoveries that help confirm the historical accuracy of the Bible. The biblical kings Ahaz, Pekah, Hoshea, Rezin and Tiglath-Pileser all really lived, Ahaz really did send tribute to the Assyrian king, and Tiglath-Pileser really did attack and conquer much of Israel and subdued the surrounding regions.

The debate about the “accuracy” of the Bible continues to rage. But as time goes on, more and more details are being proved through archaeology. Just how reliable is the Bible? To prove it for yourself, request a free copy of our booklet The Proof of the Bible.