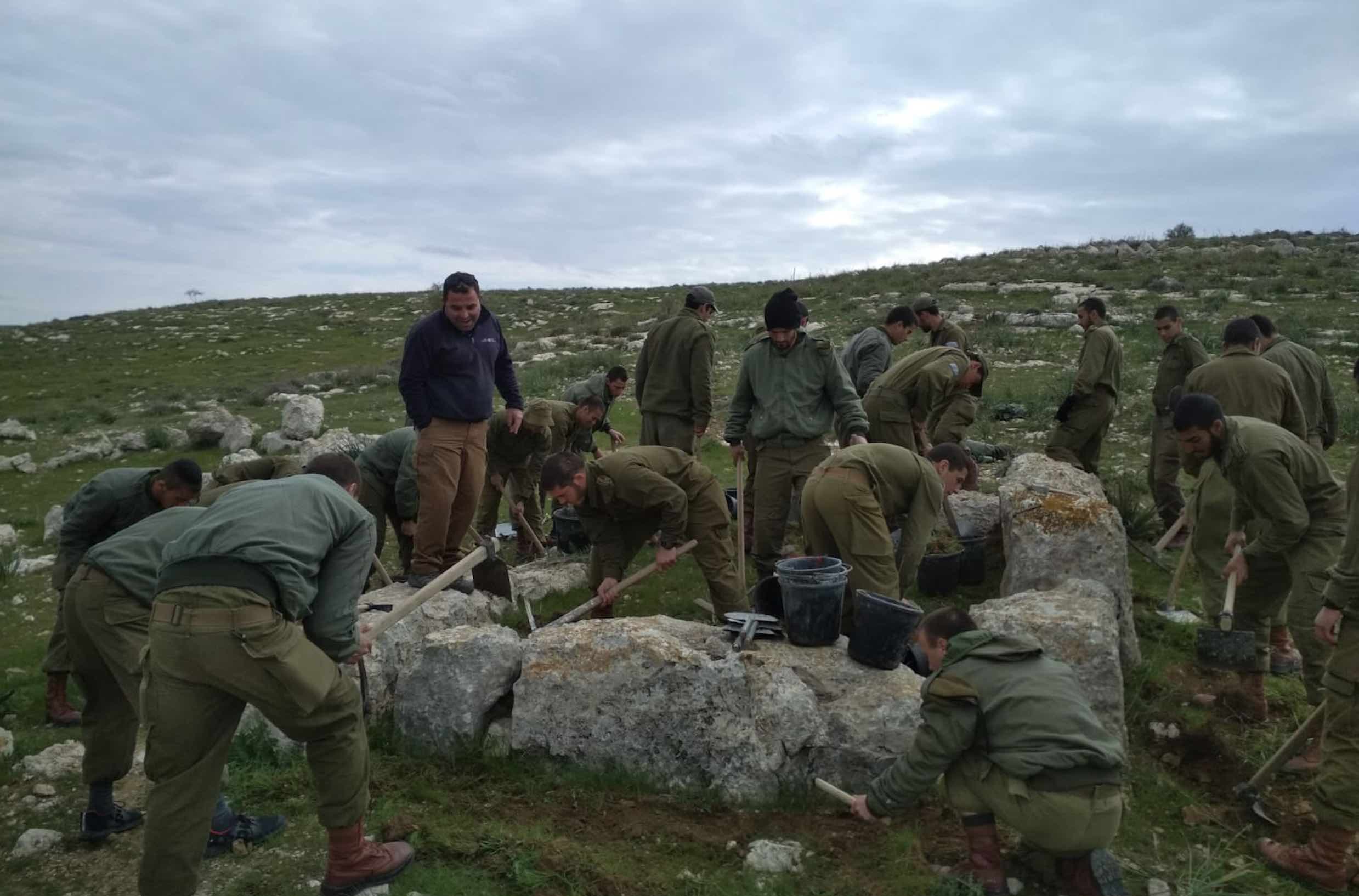 A 150-strong force of the idf Paratroopers Brigade recently uncovered an ancient military tower used by their early Judahite counterparts during the reign of King Hezekiah.

The soldiers, stationed in the south of Israel, were participating in the idf Nature Defense Forces Project (in joint cooperation with the Israel Antiquities Authority)—a mission aimed at protecting the landscape, nature, and heritage of Israel. The watchtower foundations they uncovered in their training zone measured approximately 5 x 3.5 meters, preserved to a height of two meters (the structure probably originally stood four meters tall, having two stories). The tower, made up of large stones weighing as much as eight tons, was advantageously positioned on a high hill overlooking the Judean plains, Hebron mountains, and the coastal region of Ashkelon.

The excavation directors, Sa’ar Ganor and Valdik Lifshitz, believe this watchtower served as part of a network of towers connecting various Judahite cities, with a purpose of delivering early-warning fire signals. “This tower is one of the observation points connecting the large cities in the area, located in the Beit Mirsim (Mirsham), Tel Eton and Tel Lachish sites. In ancient times, to transmit messages, beacons of smoke were lit during the day and beacons of fire at night. It is probable that the watchtower now uncovered is one of the towers that bore some of the beacons.”

The use of these early warning beacons is mentioned in the Bible. “Blow the trumpet in Tekoa, and set up a signal-fire in Beth Haccerem; for disaster appears out of the north, and great destruction.” (Jeremiah 6:1, New King James Version; see also Judges 20:38, 40). Further evidence of them is also noted on the Lachish Letters (sixth-century bce pottery inscriptions). One such letter reads, “And may (my lord) be apprised that we are watching for the fire signals of Lachish according to all the signs which my lord has given, because we cannot see Azekah.” Watchtowers are also mentioned throughout the Bible. “And when Judah came toward the watch tower in the wilderness …” (2 Chronicles 20:24; see also Isaiah 21:5-8 and Habakkuk 2:1).

The demise of this recently discovered watchtower evidently did not come at the hand of the nearby Philistines, though—the remains discovered show that it was abandoned at the time of King Sennacherib’s invasion of Judah, during the middle-to-latter part of Hezekiah’s reign (end of the eighth-century bce). Evidence shows that the tower entrance was blocked at that time, with the small contingent of watchmen most likely fleeing to the nearest fortified city. Unfortunately for them, they would almost certainly have been killed or captured—Sennacherib’s annals attest to the defeat of 46 Judahite cities, as well as some 2,000 farms and villages. Sennacherib’s onslaught was only halted at his final destination: the city of Jerusalem. (The archaeological evidence for Sennacherib’s campaign against Judah, as described in the Bible, is widespread—take a look at our museum page highlighting artifacts we recently displayed in a premiere exhibit, attesting to this event.)

The uncovering of the military outpost, and by members of the same armed forces no less (albeit 2,700 years on!) carried special significance. As Second Lieutenant Roi Ofir (21) stated, “This is the first time I participated in excavations. The connection to the land, and the fact that there were Jewish fighters in the past, gave me a sense of mission. The fact that there was also a connection to the area where we carried out our own military maneuvers left us with a feeling that we were giving back.”

Archaeology continues to highlight the deep, millennia-old Jewish connection with the Holy Land, with numerous discoveries both backing up and adding vivid color to the biblical text. Congratulations to the Paratroopers Brigade, and as numerous excavations continue to take place around Israel, we look forward to the revealing of further significant finds.