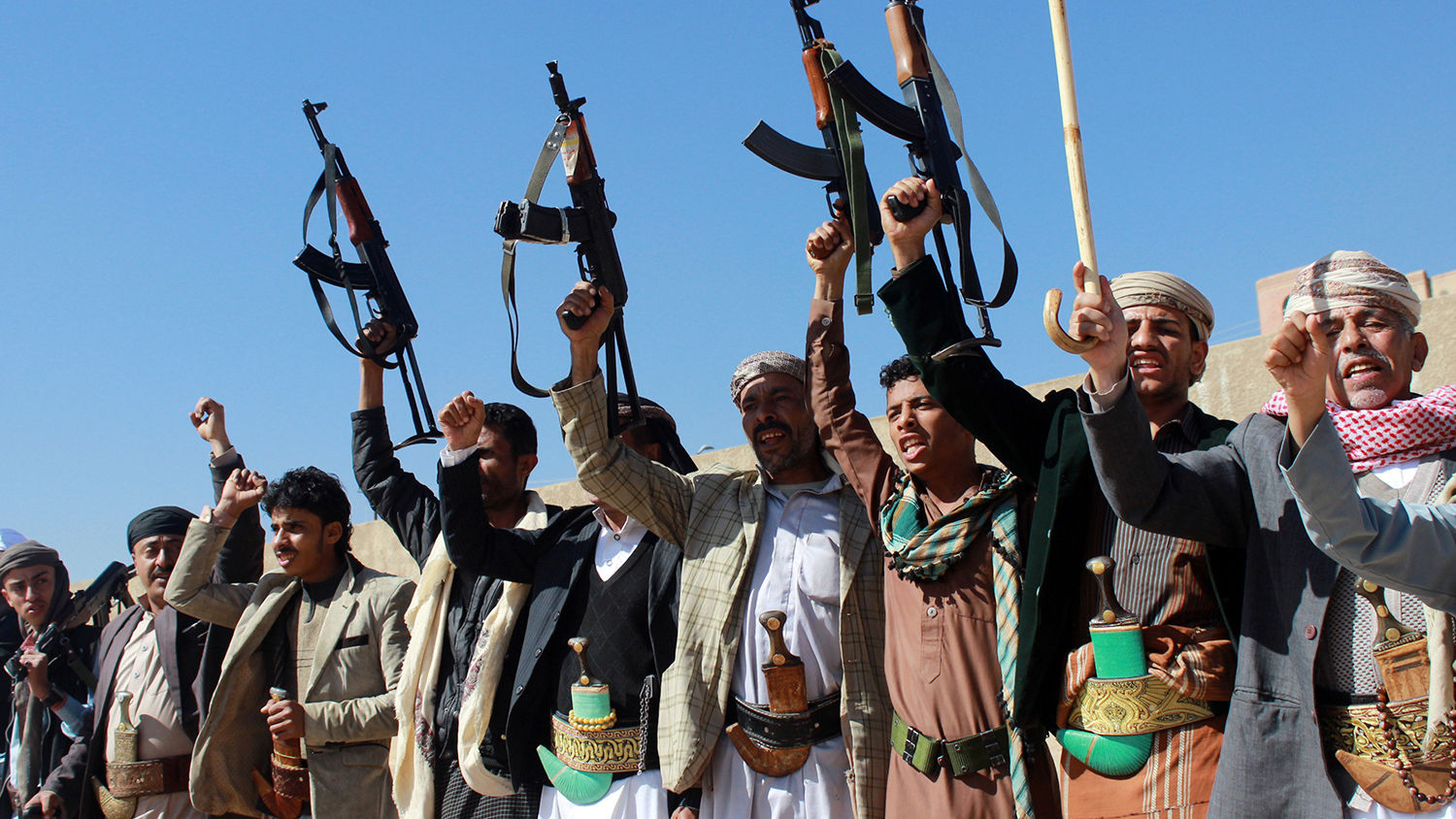 Supporters of Shiite Houthi rebels and militiamen hold a rally against the Saudi-led coalition on Dec. 17, 2015, in Sanaa. Saudi Arabia has been leading the war against the Iranian-backed rebels.
ABDEL RAHMAN ABDALLAH/AFP/GETTY IMAGES

Iranian-backed Houthi rebels have launched a cascade of attacks on Saudi Arabia in recent weeks. These attacks have included an oil pipeline, a desalination or power station, and several airports, many with a United States military presence.

Most notably, on May 14, seven Houthi drones attacked two oil facilities along the Saudi Aramco East-West pipeline. The attack caused minor damage, but temporarily halted oil flow through the important pipeline for several days. This pipeline, which stretches from the Persian Gulf to the northern Red Sea, is a vital strategic asset for Saudi Arabia because it allows oil flow to bypass vulnerability to Iran via the Persian Gulf, Strait of Hormuz and Gulf of Oman—where multiple recent attacks on oil tankers have occurred. The May 14 attack was a statement to the Saudi kingdom that none of its oil is safe—whether it travels through the Strait of Hormuz or not.

Saudi Arabia’s Najran Regional Airport was attacked by Houthi drones three days in a row beginning on May 21. The New York Times reported last year that Najran Airport also hosts a U.S. intelligence analysts base. The base is used to assist Saudi forces and U.S. troops deployed in the area. The attack by Qasef-2 drones targeted an “arms depot,” alleged “military aircraft hangars,” and an advanced U.S. Patriot surface-to-air missile battery. No damage or casualties were reported by Saudi officials.

Saudi Arabia confirmed on June 20 that Iranian-backed Houthi rebels in Yemen fired a “projectile” at a Saudi desalination plant. In the same attack, the Houthis Al-Masirah tvchannel reported that the rebels hit what it claimed to be a Saudi power station with a “cruise missile.”

On June 22, in another attack against the Ahba International Airport, a Houthi cruise missile hit the arrival lounge, injuring 26 civilians.

According to a U.S. military statement, an American MQ-9 drone was shot down from high altitude on June 6 by Houthi rebels with assistance from Iran. Lt. Col. Earl Brown, a spokesman for U.S. Central Command, said that the strike was a clear “improvement over previous Houthi capability.” How?

Houthi rebels do not have the inherent capability of shooting down a U.S. drone. Instead, the movement relies on a nation that has made a giant leap in that field of development. Iran is the real power behind the Houthi rebel capabilities.

On June 20, Iran’s Islamic Revolutionary Guard Corps announced it had downed a U.S. drone it called a “$200 million giant.” The drone was reportedly designed to evade the very missile that shot it down. The following day, Iran released photos of various parts from the drone. On Twitter, U.S. President Donald Trump confirmed the attack and claimed the U.S. was “loaded to retaliate.” However, 10 minutes before the alleged attack, he called it off, stating that the estimated 150 Iranian lives that would be lost were “not proportionate to shooting down an unmanned drone.”

The report concluded that Houthi drones are “imported, rather than designed or manufactured in Yemen,” and “produced by Iran’s [state-controlled] Aircraft Manufacturing Industrial Company.”

According to the Wall Street Journal, U.S. defense officials say that Houthi rebels receive “significant Iranian support” and have increased “the lethality and range of their systems.”

A January 25 United Nations report to the Security Council stated that “in August 2018, a substantial consignment of assault rifles was seized by a warship of the United States of America from a boat heading toward the southern coast of Yemen,” likely from Iran. The report also found a small number of Yemeni companies were acting as front companies for Iran to “donate” fuel to the Houthi rebels.

According to Israel’s ambassador to the UN, Danny Danon, Iran provides the Houthi rebels with several million dollars in funding each year, while the Saudi-led coalition spends an estimated $5.5 billion each month.

While there have been disagreements between the Houthis and Iran in the past, Iran still maintains significant influence over Houthi actions. If Iran wants an oil pipeline attacked, the Houthis act. Iran—the puppet master—carries out its will without taking the brunt of blame.

Watch Jerusalem editor in chief Gerald Flurry writes in Libya and Ethiopia in Prophecy, “Yemen is already infested with terrorists. It is located on the Red Sea and the Gulf of Aden—and is another strategically powerful country if you are trying to control world trade.” That is exactly Iran’s goal.

A prophecy in the book of Daniel names “the king of the south” as a major world power in the last days. Mr. Flurry identifies the king of the south as radical Islam, led by Iran, in The King of the South. (Request your free copy.) The booklet describes how Iran became dominant through its policy of state-sponsored terrorism, primarily through supporting its various proxy groups.

“And at the time of the end shall the king of the south push at him …” (Daniel 11:40). Mr. Flurry writes in The King of the South, “[Iran] is always pushy in its foreign policy. It pushes until it starts a war. Having such power means that it must be a large oil-producing country.”

Yemen borders the Bab el-Mandeb strait. This waterway is a vital shipping route, facilitating roughly 4.8 million barrels of oil and petroleum per day in 2016, according to the Energy Information Administration. More than half of that sailed north into the Mediterranean Sea toward Europe and North America.

Though Djibouti—a small nation across the strait from Yemen—hosts military bases from several different nations, such as China, France, Japan and the United States, Watch Jerusalem’s bold prediction that Iran will gain some form of control over this shipping lane is based on Bible prophecy.

One aspect of Iran’s “push” is its choke hold on sea gates like the Bab el-Mandeb. If Iran were to gain control of this busy shipping lane and disrupt transit, trade vessels would have to reroute around the southern tip of Africa. This would cause oil prices to skyrocket around the world, especially in Europe.

Saudi Arabia’s East-West Pipeline allows it to bypass that choke point. However, the Houthi attack on May 16 shows that not even Saudi Arabia’s “safe” method is fully secure.

Daniel 11:42-43 mention Iran as having some form of control over Ethiopia, Egypt and Libya. This suggests that these nations will be part of this radical Islamic alliance. These three nations are the key to understanding Iran’s strategy. Mr. Flurry continues in Libya and Ethiopia in Prophecy:

Iran controls the Strait of Hormuz, and via its Islamic allies in Egypt is fast gaining decisive influence over the Suez Canal. When it eventually gains influence over Ethiopia and Eritrea, Iran will control the Red Sea.

When that happens, Iran will have the power to lock down virtually the entire Middle East!

Much of Europe’s trade with Asia travels through the Suez Canal, the Red Sea and the Bab el-Mandeb. These scriptures in Daniel indicate that Iran will gain control of this vital shipping lane and use it as a means of pushing at Europe.

As the Houthi aggression continues to escalate, watch for the Houthis to become more emboldened, providing Iran with the capability to disrupt global trade.