A handful of ancient Hebrew inscriptions verify the existence of a biblical high priest.
By Eleanor Clarke • July 10, 2019 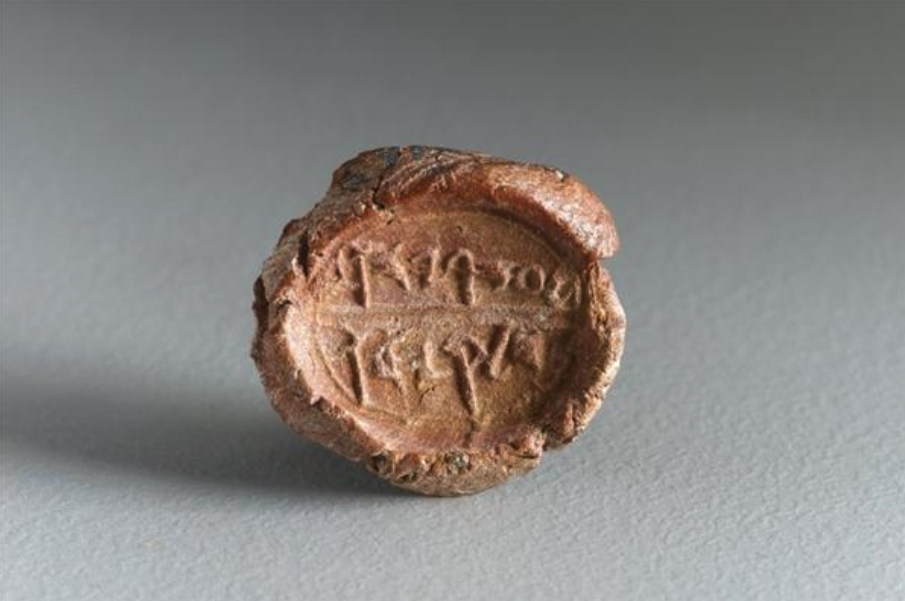 Hilkiah was the high priest of Judah during King Josiah’s reign. Three ancient artifacts have thus far been found, helping to corroborate his existence.

Josiah had started a religious revival and ordered that the temple be restored (2 Kings 22, circa 623 b.c.e.). As this effort began, Hilkiah found the “book of the law” in the temple and brought it to Shaphan the royal scribe to give to the king. This book of the law further energized Josiah’s reforms, restoring God’s law throughout Israel. Many scholars believe that this book of the law, “given by Moses” (2 Chronicles 34:14), may have been one of the original copies of the book of Deuteronomy (if not the entire Torah)—and was perhaps written by Moses himself.

In 1982, while excavating in the city of David, Israeli archaeologist Yigal Shiloh found a hoard of 51 bullae (clay seals) in what became known as the “house of bullae.” One notable bulla, measuring barely a centimeter in diameter, contained two lines of ancient Hebrew text. The inscription read: “Belonging to Azariah, son of Hilkiah.” The 2,600-year-old seal dates roughly to the time of King Nebuchadnezzar’s first siege of Jerusalem, in 605 b.c.e.

Although the Azariah bulla does not explicitly say that it belonged to the high priest, there is sufficient weight of evidence from this and other bullae to positively identify the biblical Hilkiah the priest, and his son, Azariah.

The pair are mentioned together in 1 Chronicles 6:13, 9:11 and Ezra 7:1 (Ezra was Azariah’s grandson). This bulla clearly belongs to a high Judahite official, dates to the correct time period (around Josiah’s reign), and contains the all-important two-generation record. The Bible is silent on what became of Azariah after he succeeded his father as high priest. Dr. Tsvi Schneider of Hebrew University, who published a study of the bulla, speculates that he went into exile circa 598 b.c.e. when King Nebuchadnezzar besieged Jerusalem a second time, this time taking King Jehoiachin (another archaeologically proven biblical individual) captive into Babylon (2 Kings 24:11-15).

The Azariah seal is the only excavated Hebrew inscription in which a high priest of the first temple period is mentioned. Alongside this, another bulla provides circumstantial evidence for Hilkiah’s life.

Shaphan the scribe is likewise mentioned several times throughout the Bible. Shaphan, remember, delivered the “book of the law” to the king from Hilkiah. His name appears on a second seal found in the bullae hoard. The tiny bulla bears the inscription: “Belonging to Gemariah, son of Shaphan.” This father-son team is also mentioned in several scriptures.

Schneider commented on these individuals, for Biblical Archaeology Review: “So both biblically and archaeologically, Gemariah, the son of Shaphan, and Azariah, son of Hilkiah, were contemporaries. It is hardly surprising, therefore, that the bullae of both were found in the same hoard” (July-August 1991). The fact that these bullae were found together in the same stratum gives weight to the biblical account.

For more information on this specific seal, read our article “The Scribe Gemariah—Uncovered!”

Another related find is the seal of Hanan. The seal, still embedded in part of its ring, was found in 1980 and sold into a private collection. Dr. Josette Elayi published the find in 1987. Its inscription reads: “Belonging to Hanan, son of Hilkiah the priest.” Although it was not discovered in an archaeological excavation, there is little doubt as to the authenticity of the seal. Dr. Elayi raised the possibility of Hanan also being a son of Hilkiah the high priest and brother to Azariah. The Bible does not mention a “Hanan, son of Hilkiah,” but given the popularity of the name during the Babylonian Period, the connection is not unlikely. Dr. Elayi and other experts have also analyzed similarities in the script style and say that the seal was most likely made by the same craftsman as the Azariah seal.

Taken together, these three ancient Hebrew inscriptions bring the biblical high priest Hilkiah to life, as well as illuminate life in the royal courts just before the fall of Jerusalem. Discoveries such as these add to the abundance of archaeological evidence that prove the historical authority of the biblical record.

For more information about how archaeology proves the accuracy of the biblical account, please read our article “Proof: Archaeology Proves the Bible”