At some point, this anomalous presidency will end. Then what?
By Brad Macdonald • July 18, 2019 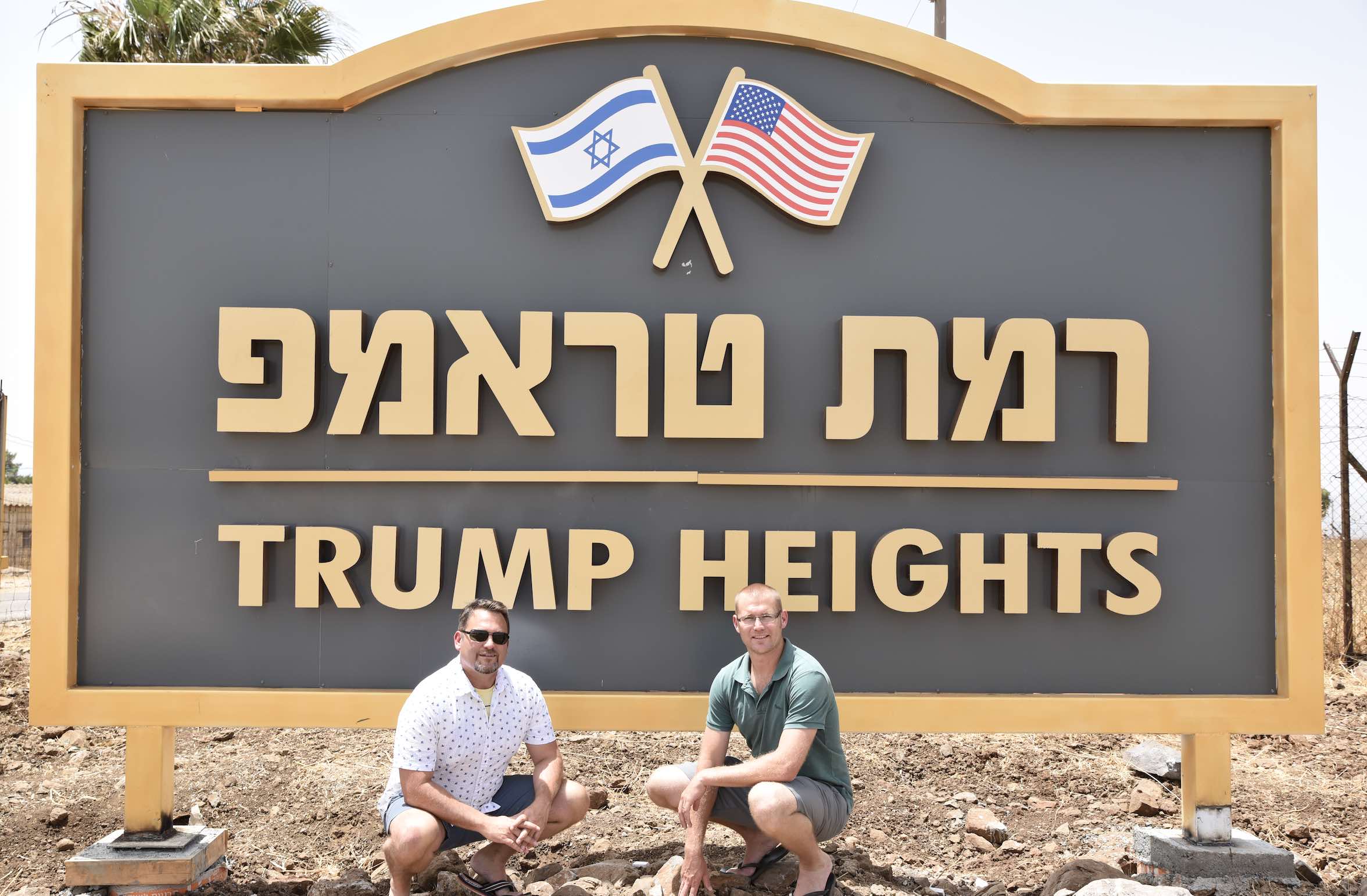 The North, Israel
I have spent the past two days touring northern Israel, a magnificently fertile land watered by gushing springs and dressed with vineyards and fruit trees laden with bounty. It is also the location of Trump Heights.

Situated in the Golan Heights, this fledgling little settlement was recently named after and in honor of America’s president. Trump Heights is more symbolic than anything: a gesture of gratitude from Israel’s prime minister after Mr. Trump made America the first and only country in the world to recognize the Golan Heights as part of Israel’s sovereign territory.

It is decisions like this that arouse deep affection in Israel for Donald Trump. America’s president has been called the “first Jewish president of the United States.” Caroline Glick called Mr. Trump “the most pro-Israel president in U.S. history. No other president comes close.”

At a time when anti-Semitism is mounting globally and Israel is being increasingly maligned and isolated, especially in Europe and in organizations like the United Nations, Mr. Trump’s support is both extraordinary and indispensable. Israelis know it too, which is why so many love Donald Trump. America’s president gives Jews all over the world, and especially here in Israel, reason to be hopeful and confident.

The problem with confidence, however, is that it can be dangerous.

Before we get to that, let’s review some of Mr. Trump’s great acts of support for Israel. They really are remarkable, especially when you consider how unpopular it is today to support Israel.

On May 22, 2017, Donald Trump became the first sitting U.S. president to visit the Western Wall, one of the Jews’ most revered sites. The visit, made with his daughter Ivanka and her husband, Jared Kushner, wasn’t official (no Israeli diplomats were present). Still, the gesture, delivered early in the Trump presidency—and deeply unpopular with the international community, was a clear sign of where America’s president stood.

Six months later, on Dec. 6, 2017, Mr. Trump again made history by becoming the first U.S. president to declare Jerusalem Israel’s capital. On May 14, 2018, on the 51st anniversary of the Six-Day War and Jerusalem’s unification, the U.S. opened its embassy in Jerusalem. America had promised for decades to relocate its embassy to Jerusalem. Donald Trump was the one who actually got it done. At the embassy opening, Israeli President Reuven Rivlin said, “We have a leader who promised it and also kept his promise.”

That wasn’t the only big development in May 2018. On May 8, President Trump announced that he was withdrawing America from the Joint Comprehensive Plan of Action, or the Iran nuclear deal. “This was a horrible one-sided deal that should have never, ever been made,” Mr. Trump said. “It didn’t bring calm, it didn’t bring peace, and it never will.” The decision infuriated Barack Obama and virtually the entire political establishment in America, as well as Russia, China, Europe, Britain and almost the entire international community.

Earlier this year (on March 21), America’s president announced that he planned on recognizing Israel’s sovereignty over the Golan Heights. With one tweet, the president overhauled America’s policy on the Golan: “After 52 years it is time for the United States to fully recognize Israel’s sovereignty over the Golan Heights, which is of critical strategic and security importance to the State of Israel and regional stability!” Again, this decision was deeply unpopular in America and among the international community. But that didn’t faze Mr. Trump—Israel came first.

There have been other gestures too, including America’s robust defense of Israel in the notoriously anti-Israel United Nations. Nikki Haley, America’s ambassador to the UN from January 2017 to December 2018, was handpicked by Donald Trump and was an absolute warrior for Israel. Under Haley, the U.S. introduced Security Council resolutions condemning Hamas and withdrew U.S. support from UNESCO, UNRWA and the UN Human Rights Council, all on the behalf of Israel.

When you look at all these decisions it’s easy to understand Israel’s affection for Donald Trump and why Israelis would be so hopeful. Knowing that the leader of the most powerful nation on Earth has your back creates a certain confidence and comfort. Throw in the fact that Israel’s economy is strong and the threat from Hamas and Hezbollah appears manageable, and you can understand why the nation is optimistic.

But Israel needs to be careful. Careful that Mr. Trump’s ardent support doesn’t allow the nation to become too confident. Careful that its strength, economically and militarily, doesn’t create a false sense of security. Careful that it doesn’t exaggerate America’s long-term ability to support and defend the Jewish state.

Stephen Flurry, host of the Trumpet Daily Radio Show, noted this following America’s decision to move its embassy to Jerusalem. “President Trump following through and moving the embassy is admirable,” he said. “But this decision isn’t going to bring peace. That much is sure. We must keep our minds on the bigger picture. Do these events really have the substance and the gravity it takes to last? Are these developments strong enough to resist the opposition? That is the real question.”

Indeed. There is a limit on how long Donald Trump will be president. At some point, this anomaly will end. Then what?

Mr. Flurry was referring to Bible prophecies in Hosea 5 and elsewhere that show the U.S. will soon reach the point where it lacks the power to provide meaningful support to the Jewish state. In fact, Bible prophecy says that conditions in Israel will become so desperate that it will have to turn to Germany for help. Sadly, this prophecy says that Germany will appear to assist Israel, but will then double-cross the Jewish state.

This incredible prophecy is explained in detail in Jerusalem in Prophecy, by Watch Jerusalem editor in chief Gerald Flurry. This booklet gets right to the core of Israel’s problem: “It seems the Israelis can trust their worst enemy, but they can’t trust God to protect them! And God is their only true source of help.”

Shmuel Boteach, a popular American rabbi, described the sentiment many Jews have toward Donald Trump in a recentJerusalem Post article. He wrote, “Hearing the most powerful man on Earth acknowledge the rise of Jew-hatred all over the globe, and his declaration of war against it, helped to greatly assuage Jewish feeling of isolation and abandonment. U.S. President Donald Trump told us that we’re not in this fight alone. There will be no modern Masada. There is no Fortress Israel. The most powerful nation on Earth is by Israel’s side” (emphasis added).

One can appreciate this man’s sense of hope. He is, in many ways, right. But his concluding sentences need an extra two words.

“There will be no modern Masada”—for now.

“There is no Fortress Israel”—for now.

“The most powerful nation on Earth is by Israel’s side”—for now.

Brad Macdonald is the managing editor of Watch Jerusalem. You can more of his articles here.