What a miniature discovery says about a Herculean hero
By Christopher Eames • August 12, 2019 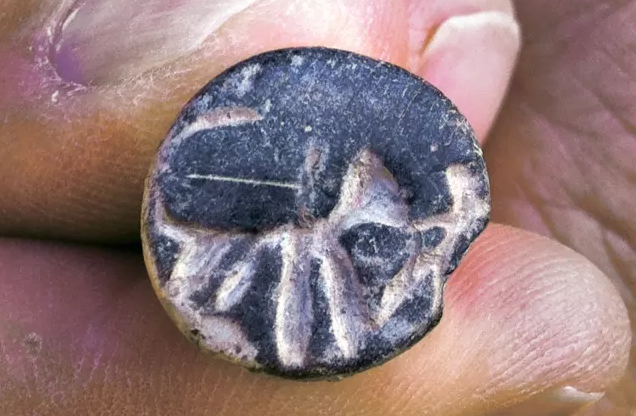 Samson—the legendary biblical strongman. And for many, he is seen as just that—legendary, a figment of imagination. Now, however, archaeology is offering a tantalizing glimpse into the historicity of this biblical account.

One of the particularly famous stories of Samson is the Judges 14 account of his fight with a lion. On his way to the Philistine city of Timnath to meet with a woman “of the daughters of the Philistines,” he was met by a lion: “And the Spirit of the Lord came mightily upon him, and he tore the lion apart as one would have torn apart a young goat” (verse 6; New King James Version).

An exciting artifact has been uncovered that appears to parallel this account. It is a small stone seal stamp, about 15 millimeters in diameter, discovered at the site of Beth Shemesh in 2012. The seal appears to show a man and a lion in combat. Though the seal was poorly made, there are two other elements—besides the image—that make it particularly interesting.

One is the period to which it dates: the 12th century b.c.e. This matches up with the same biblical century within which Samson would have lived. Secondly is the location where it was found: Beth Shemesh. This site is actually very near to Timnath, where Samson was headed when he encountered the lion! And so even though the specific intent of this seal is still unknown, these three elements—image, dating and location—help “anchor the story [of Samson] in an archaeological setting,” said Prof. Shlomo Bunimovitz, codirector of the Beth Shemesh dig. They help indicate a core event that was circulated around the “neighborhood.”

Of course, any absolute archaeological proof of the man himself is naturally going to be elusive. But this artifact is one of a growing number attesting to the legitimacy of the Samson account. The presence of the Philistines and Israel’s struggles against them during this time period have been clearly shown through archaeology. The biblical Philistine cities have been discovered.

The act of blinding Samson, then putting him to backbreaking labor in a mill, has been attested to in Hittite archaeology—and the Hittites were defeated by the Sea Peoples, of whom the Philistines made up a significant part. Thus, it would not have been surprising for the barbaric Philistines to have adopted such a punishment.

It also appears that the Greek legend of Hercules came about as a later, extreme dramatization of the Samson story—possibly also attesting to the core legitimacy of the latter. You can read about parallels between the two, and an explanation for the spread of the story, here (a longer article on this subject is forthcoming).

A growing amount of archaeological evidence is showing that incredible biblical stories such as Samson’s can no longer be wholly dismissed as “fantastical.” At the very least, the skeptic must admit that they contain core truths. And it remains true that sometimes, evidence of the greatest of figures comes from the smallest of objects.