Archaeological proof of an ancient industry and its possible use in adorning Solomon’s temple
By Brent Nagtegaal • August 20, 2019 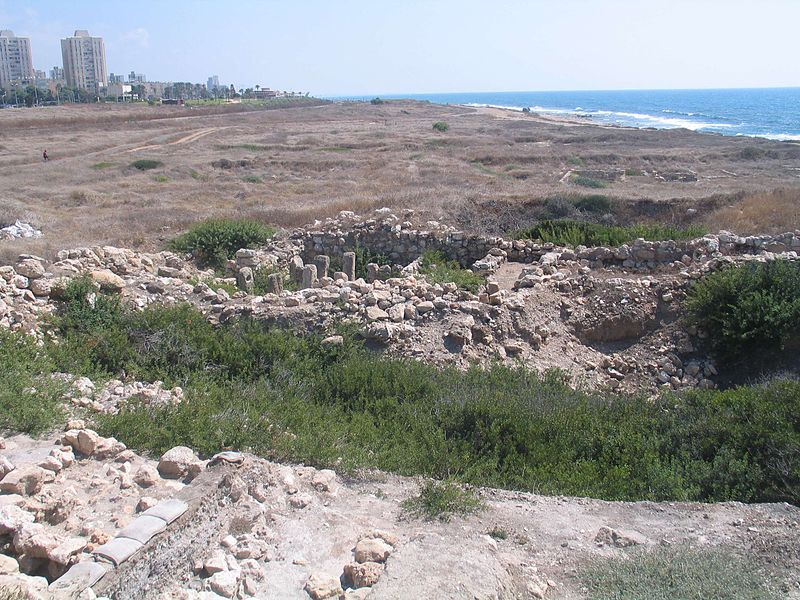 jerusalem
Tel Shikmona has puzzled archaeologists and researchers for years. This tiny ancient fortified coastal city was difficult to reach by ship and too small to be of any defensive significance. Archaeologists could not see any reason for its existence. The site was originally excavated in the 1960s and 1970s, but it wasn’t until researchers took a second look at the findings that the secret of Shikmona began to reveal itself: It is the first biblical-period facility for the mass production of purple-dyed textiles.

The color’s use is mentioned throughout the Bible, but no mass production facility had been found—until now.

Tel Shikmona is located on the coast of Israel, near modern-day Haifa. Around the time of Solomon, this coastal region was occupied by the Phoenicians. They had a trading empire based along the coast from Tyre and Sidon. The Phoenicians were synonymous with purple dye. They exported the dye throughout their trading empire.

Until now, there has not been any meaningful direct archaeological evidence of workshops for the production of purple-colored textiles from the Iron Age—the biblical period—not even in Tyre and Sidon, which were the main Phoenician centers for the manufacture of purple dye.

Before now, there had been no solid proof of the manufacture of purple dye in this period. Productions sites for the dye can be found further north in Phoenician territory—such as Tyre, Sidon and other sites in Lebanon—but they all date to the classical period. Shikmona is the only facility of its kind found from the biblical period. Gilboa and Shalvi continued:

The conspicuous Phoenician material culture revealed at the site also makes sense now: The residents (or rather employees) had an affinity to the cultural and informational world of the Phoenicians, who held the secrets of the manufacture of purple dye. Purple-dyed cloth formed the backbone of trading networks ….

The researchers explained that two phenomena are immediately apparent from the hundreds of pottery shards waiting on the shelves at the archive:

First, that the wealth of findings is associated with the Phoenician culture, including an unusual number of vessels imported from overseas. Thus, for example, Shikmona is home to the largest number of Cypriot “Black-on-Red ware” ever found outside the island.

Cypriot pottery, with its distinctive red with black markings, is very common in the archaeological sites of the region. The vast collection of pottery from Cyprus shows that the Phoenicians in Shikmona were trading with the Cypriots.

The second phenomenon is even more amazing: The largest collection of ceramic vats found anywhere in the world from the first millennium b.c.e. that still preserve purple coloring of various shades.

It is truly remarkable that after 3,000 years the purple coloring is still visible on these vats that were used for the production of the dye. Scientists studied the pigments in the pottery to prove that it was indeed dye and not another form of discoloration. They discovered that it was genuine sea snail pigment! Specifically, from the murex marine snails found a short way off the coast from Shikmona. They continued:

Thanks to the latest insights, the researchers can now cast new light on the importance of Shikmona. This small isolated site was not a village or a settlement at all, but rather a fortified factory for the production of purple dye and the dyeing of textiles and wool. Its location on a rocky coast with no convenient anchorage now becomes logical: Such an environment would provide the ideal habitat for the murex snails, which could be harvested in the tens of thousands.

Researchers emphasized how rare it was to find a collection of almost 30 vessels with the dye. Similar pottery has been found in much smaller quantities in sites like Dor and Akko. Shikmona also contained dozens of loom weights and spindle whorls used for the production of wool and textiles that were dyed on site. It appears that this facility not only produced the dye but also the material that would be dyed.

The dye factory is estimated to have been in use for about 500 years, from the 11th to the sixth century b.c.e. Within this period was the construction of Solomon’s temple. In the ancient world, purple dye was a luxury in high demand, reserved only for nobility and royalty. And yet, to this day, only one factory has been uncovered. Is it possible that the purple dye used in the creation of Solomon’s temple was manufactured at this very site?

The Bible records Solomon sending a message to the Phoenician king requesting supplies and craftsmen for the construction of the temple. 2 Chronicles 2:3, 7 of the Berean Study Bible state:

Then Solomon sent word to King Hiram of Tyre: “Do for me as you did for my father David when you sent him cedars to build himself a house to live in …. Send me, therefore, a craftsman who is skilled in engraving to work with gold and silver, bronze and iron, purple, crimson, and blue yarn. He will work with my craftsmen in Judah and Jerusalem, whom my father David provided.

Then King Hiram of Tyre wrote a letter in reply to Solomon: “Because the Lord loves His people, He has set you over them as king.”

And Hiram added: “Blessed be the Lord, the God of Israel, who made the heavens and the earth! He has given King David a wise son with insight and understanding, who will build a temple for the Lord and a royal palace for himself. So now I am sending you Huram-abi, a skillful man endowed with creativity. He is the son of a woman from the daughters of Dan, and his father is a man of Tyre. He is skilled in work with gold and silver, bronze and iron, stone and wood, purple, blue, and crimson yarn, and fine linen.”

The Phoenician king not only sent the materials Solomon requested but also one of his craftsmen who was skilled in working with the dye. It seems likely that this could be the facility Solomon would have used for the dye for the temple’s curtain, priestly garments and other fixtures.

Fast-forward 3,000 years and this fortress factory on the coast of Israel is being uncovered, bringing the story of an ancient industry back to life. The discovery at Shikmona fits perfectly into the biblical narrative. It provides context, support and credibility for the details mentioned in the Bible.