Another secret nuclear facility is revealed as Iran continues to push its nuclear program forward.
By Warren Reinsch • September 11, 2019 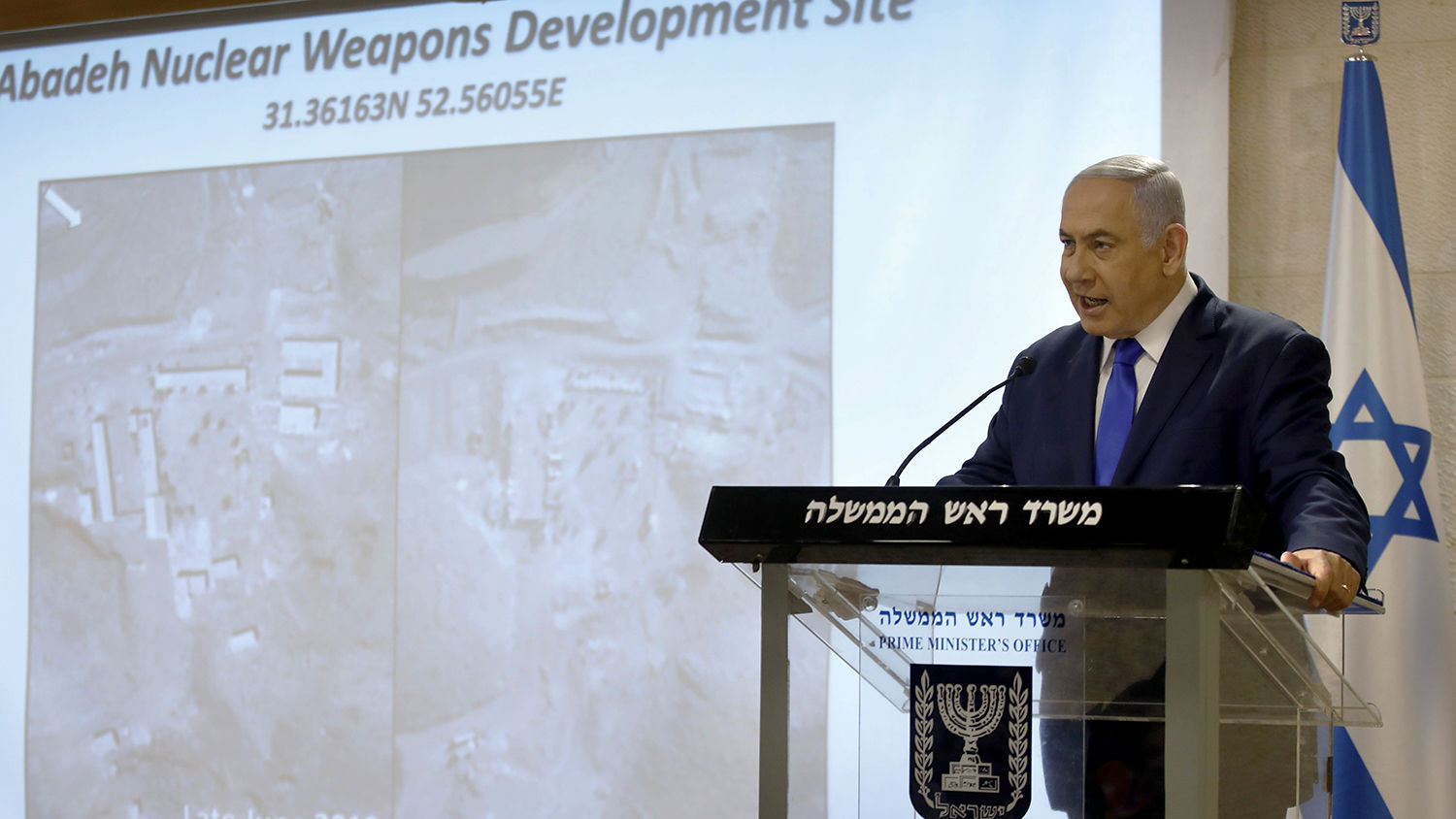 Israeli Prime Minister Benjamin Netanyahu delivers a statement to the media on the Iranian nuclear issue at the Foreign Ministry in Jerusalem on September 9.
MENAHEM KAHANA/AFP/GETTY IMAGES

In a press conference on Monday afternoon, Israeli Prime Minister Benjamin Netanyahu revealed another secret Iranian nuclear facility. The new revelation comes just one week before Israel’s election reruns on September 17, causing the opposition party to accuse Netanyahu of exploiting a fear of Iranian nukes as a means of boosting his political campaign. However, Netanyahu’s press conference came hours after the International Atomic Energy Agency revealed that it found traces of uranium from Iran’s secret atomic warehouse.

Netanyahu stated that the site was where Iran “conducted experiments to develop nuclear weapons.” He showed two satellite photos of the development site in central Iran. The first photo of the site was taken in June and showed a clear picture of the facility. The second photo, taken in July, showed that after the site had been discovered, the Iranians had the facility demolished in an attempt to cover up and destroy the evidence.

This latest information comes a year and a half after Netanyahu first revealed Iran’s secret nuclear archive, which exposed Iran’s plan to develop five nuclear warheads as early as 2003. It also comes a year after he exposed an Iranian secret nuclear warehouse in Tehran and asked the International Atomic Energy Agency to inspect the site, where he claimed Iran had once stored 33 pounds of radioactive material, which it disguised as rug cleaner. In April, Reuters reported that the agency had inspected the site and took samples for analysis.

A few hours before Netanyahu’s speech, the International Atomic Energy Agency announced the discovery of traces of uranium from the sample taken at the Tehran warehouse, the same element Iran is enriching and one of the only two fissile elements with which it is possible to develop a nuclear bomb.

Netanyahu responded to the discovery by calling it a direct violation of the Non-Proliferation Treaty. He also showed satellite images of the warehouse, which illustrate that Iran literally covered it up with gravel.

He called on the world to “wake up” and “realize that Iran is systematically lying. … The only way to stop Iran’s march to the bomb, and its aggression in the region, is pressure, pressure and more pressure.”

Many of Netanyahu’s political opponents have accused him of exploiting a fear of Iranian nukes as a means of gaining more votes in the upcoming September 17 rerun elections. “Netanyahu is again using intelligence information for his campaign propaganda,” Blue and White co-leader Yair Lapid said. “This is terrible national irresponsibility. Iranian nukes cannot be used as campaign antics.” The political race in Israel is close; most opinion polls show Netanyahu’s Likud party and the Gantz-Lapid Blue and White party to be neck-and-neck, possibly with a slight edge to Netanyahu. Democratic Union’s Ehud Barak called Netanyahu’s statement a mere “election spin.” Despite the timeliness of the prime minister’s statement to gather in a few extra votes, Netanyahu has always been committed to exposing Iran’s lies and protecting Israel.

In a live video chat on Facebook, Netanyahu said that this is “the most important issue as far as our future is concerned. And I am not relenting for a moment.” For years now, Netanyahu has been a lone voice in politics warning against Iranian aggression. And for good reason, because Iran’s nuclear program is not slowing down.

Fox News reported on Saturday that Iran publicly threatened to push its uranium levels beyond 20 percent enrichment. Behrouz Kamalvandi, spokesman of the Atomic Energy Organization of Iran, said, “The Islamic Republic of Iran is capable of increasing its enriched uranium stockpile, as well as its enrichment levels, and that is not just limited to 20 percent. We are capable inside the country to increase the enrichment much more beyond that,” even to weapons-grade levels. This is possible because Iran is now pumping uranium gas into advanced centrifuges, another violation of the Joint Comprehensive Plan of Action nuclear deal signed by Iran and implemented in 2016.

The nuclear deal allows Iran to have a maximum of 3.67 percent uranium enrichment. Since it began openly breaking the agreement, Iran has already achieved 4.5 percent. Samples taken in 2012 found Iran had achieved at least 27 percent enrichment—which it now intends to surpass. Iran has also begun using more advanced centrifuges.

Kamalvandi said it is now using 20 IR-6 centrifuges (which enrich uranium 10 times faster than the IR-1) and 20 IR-4 centrifuges (which enrich five times faster than the IR-1). Experts estimate that the move to use more advanced centrifuges indicates Iran could have enough nuclear material for a nuclear weapon in about a year. (For more information about Iran breaking the nuclear deal, please read “Iran Moves Back Towards the Bomb.”)

Watch Jerusalem closely watches Iran’s nuclear development because the Bible prophesies of Iran’s provocative foreign policy. Daniel 11:40 says: “And at the time of the end shall the king of the south push at him: and the king of the north shall come against him like a whirlwind.” Notice, these events occur “at the time of the end,” just before the coming of the Messiah. This is not history—it is prophecy yet to be fulfilled.

Watch Jerusalem editor in chief Gerald Flurry identifies radical Islamic extremism, led by Iran, as the “king of the south” in his free booklet The King of the South. This radical nation is prophesied to push at the king of the north—a 10-nation European empire led by Germany. The ultimate form of this push is Iran’s relentless ambition to develop a nuclear bomb. Combined with its majority Twelver Shiism belief that in order for their “Messiah” to return, they must first cause world chaos, Iran’s nuclear ambitions threaten humanity’s very existence.

Iran’s lies are becoming more and more clear. Thanks to a few like Mr. Netanyahu who work to expose the truth behind Iran’s nuclear facade, more condemning evidence is being uncovered. Iran is pushing to develop the nuclear bomb: A reality which may be within its grasp in only a year.

For more information, please read The King of the South, by Gerald Flurry.