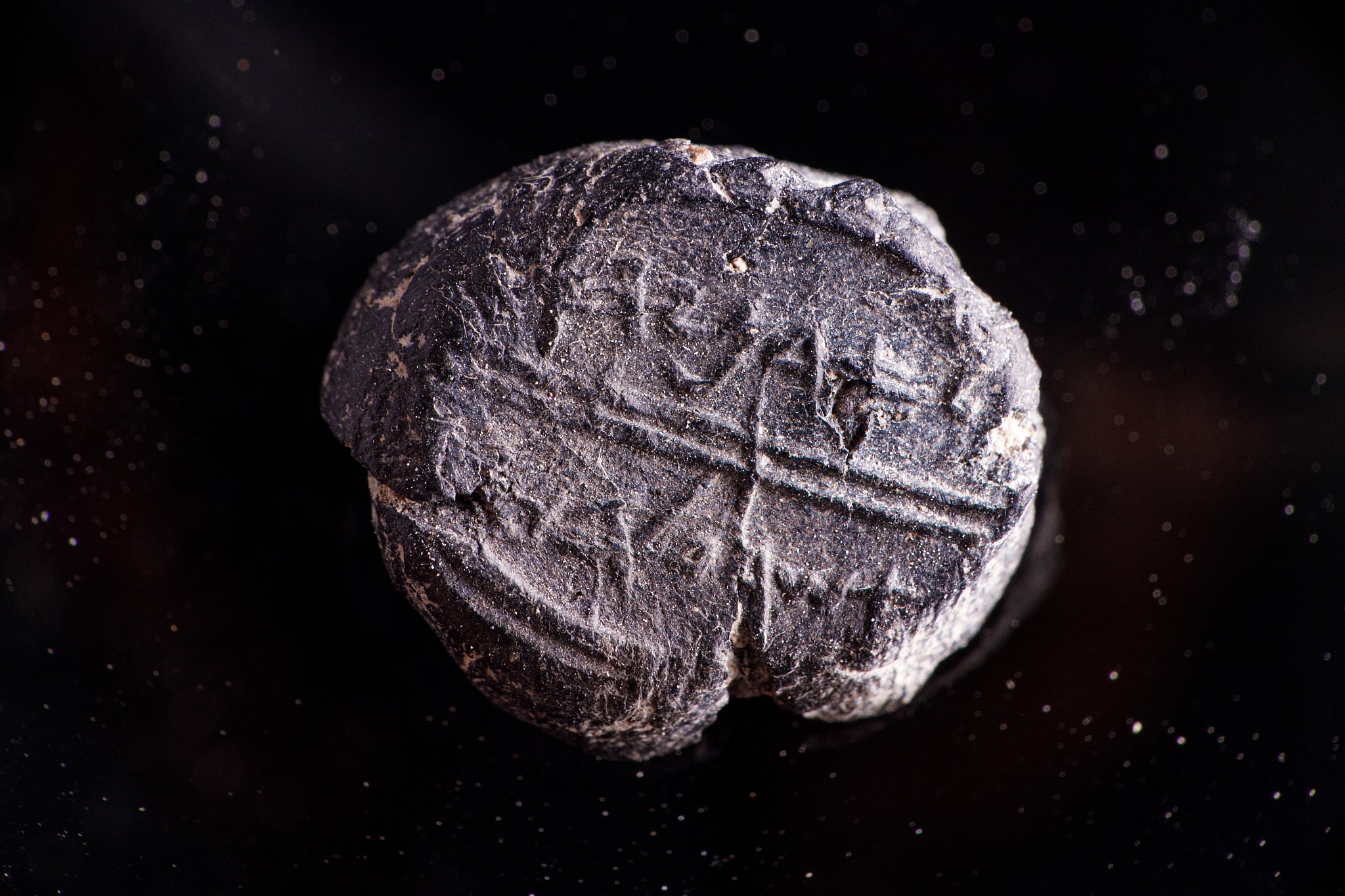 A 2,600-year-old clay seal impression reading “Belonging to Adonijah, the Royal Steward” has been recently discovered following archaeological excavations under Robinson’s Arch, near the Temple Mount.

This seventh-century b.c.e., 1-centimeter-wide bulla was not immediately revealed, however, until the soil from the 2013 excavations was sent to the City of David Sifting Project. The bulla is reliably dated based on both the calligraphy and the strata in which it was found. This means that the high-ranking official served during the operation of the first temple, under the Judahite monarchy.

“This tiny stamp seal has immense meaning to billions of people worldwide,” said Doron Spielman, vice president of the City of David Foundation. “The personal signet of a senior official to a biblical king from the First Temple period … is another link in the long chain of Jewish history in Jerusalem that is being uncovered and preserved at the City of David on a daily basis.”

And it is not the first evidence of this character. He features on a number of other seal impressions from the antiquities market—though since these bullae are of unknown provenance, they could not be absolutely confirmed as genuine artifacts. Until now. Robert Deutsch wrote, “Several seal impressions of this official were already published since 1986, 1997, 1999, including some impressed by the same seal [as that which impressed the recently discovered bulla].”

While the bulla (and its antiquities market counterparts) does not explicitly match a biblical character, it is still significant for a couple of reasons: It proves the authenticity of the biblical use of the name Adonijah, and corroborates the title “Royal Steward.”

Adonijah means “The Lord is my Master.” Three biblical figures are mentioned with this name: First and most famously, one of King David’s sons who attempted to usurp the throne; the second, a Levite during the reign of King Jehoshaphat in the ninth century b.c.e. (2 Chronicles 17:8); the third, a leader during the days of Nehemiah (Nehemiah 10:16). Though the dating of the bulla doesn’t match with any of these references, it does confirm the use of the name during the period of the kings of Judah. For more information about how these generic names confirm the accuracy of the Bible, read our article “Biblical Names Confirmed Through Archaeology.”

Royal Steward: ‘Over the House’

“This is the first time this kind of archaeological discovery has been made in Jerusalem,” said archaeologist Eli Shukron, who conducted the initial excavations at the foundations of the Western Wall on behalf of the Israel Antiquities Authority. “The biblical term ‘Asher Al-HaBayit’ was the highest-ranking ministerial position beneath the king during reigns of the kings of Judea and Israel; it is undoubtedly of great significance.”

In the later Israelite-Judahite monarchies, the position of royal steward was implemented from the beginning. In David’s kingdom, it seems those in the office of royal steward were only entrusted with domestic affairs, but their role grew over time. 1 Chronicles 27 lists the Davidic cabinet of ministers; verses 25-31 name 12 individuals who were “rulers of the substance which was king David’s.” The two leading officers were Azmaveth, who was over the king’s treasures, and Jonathan, who was over all the storehouses (verse 25).

In an article published in the Israel Exploration Journal, Vol. 10, titled “The Royal Steward,” H. J. Katzenstein wrote that these officers, primarily Azmeveth and Jonathan, were the “beginning of the office of the ‘Asher Al-HaBayit,’” but not with exactly the same title. However, after the government was reorganized by King Solomon, it is possible that he “abolished the office of the stewards of the royal property and created instead the new office of the ‘Asher Al Ha-Bayit’ by nominating Ahishar” as the first royal steward, as stated in 1 Kings 4:6: “Ahishar was over the household,” or in Hebrew, Al Ha-Bayit.

The Bible mentions that the title was given to several other individuals. In the northern kingdom of Israel, Arza took on the title as one of the king’s high-ranking officials residing in the capital (1 Kings 16:9). The scriptures indicate that when King Ahab made Obadiah his royal steward, Obadiah lived in the ancient capital city of Jezreel and was probably second in authority to the king (1 Kings 18:3, 6). The title was again referred to in the case of an unnamed official in King Joram’s royal court (2 Kings 10:1, 5).

In the kingdom of Judah, the royal steward title is mentioned as being given to Jotham while he was coregent with his father, King Uzziah (2 Kings 15:5)—however, the book of Chronicles expands the title to “over the king’s house,” which indicates he also had the judicial authority to judge the people of the land in place of his sick father (2 Chronicles 26:21). Isaiah 22 says Shebna was King Hezekiah’s royal steward (supported by the Shebna Inscription); however Eliakim, son of Hilkiah, later takes his place and is called the royal steward in 2 Kings 18:18, 26, and 37 (Isaiah 22 describes the transfer of this authority—you can read more about it in our free booklet Isaiah’s End-Time Vision).

Given the abundance of information about the royal stewards throughout Judah’s and Israel’s history, it is quite possible that this position of authority was as chief head of state under the king.

So who was the Judahite king that Adonijah served under? Based on the bulla’s seventh-century b.c.e. dating, Adonijah likely served under King Manasseh, Amon or Josiah.

In March, the bulla of Nathan-Melech, King Josiah’s chamberlain, was discovered at the Givati Parking Lot excavation in Jerusalem, just down the road from the bulla of Adonijah. These two seal impressions also follow the discovery of other exciting bullae in Jerusalem by archaeologist Dr. Eilat Mazar—most recently, the bulla of Isaiah the prophet (released in 2018), as well as the bullae of King Hezekiah and the princes Jehucal and Gedaliah (Jeremiah 38:1).

“After 2,600 years,” Shukron said, “you come and hold this bulla, which was used to seal a letter, that was sent 2,600 years ago by the highest minister in the kingdom, it’s something amazing. … It makes my heart skip a beat.”