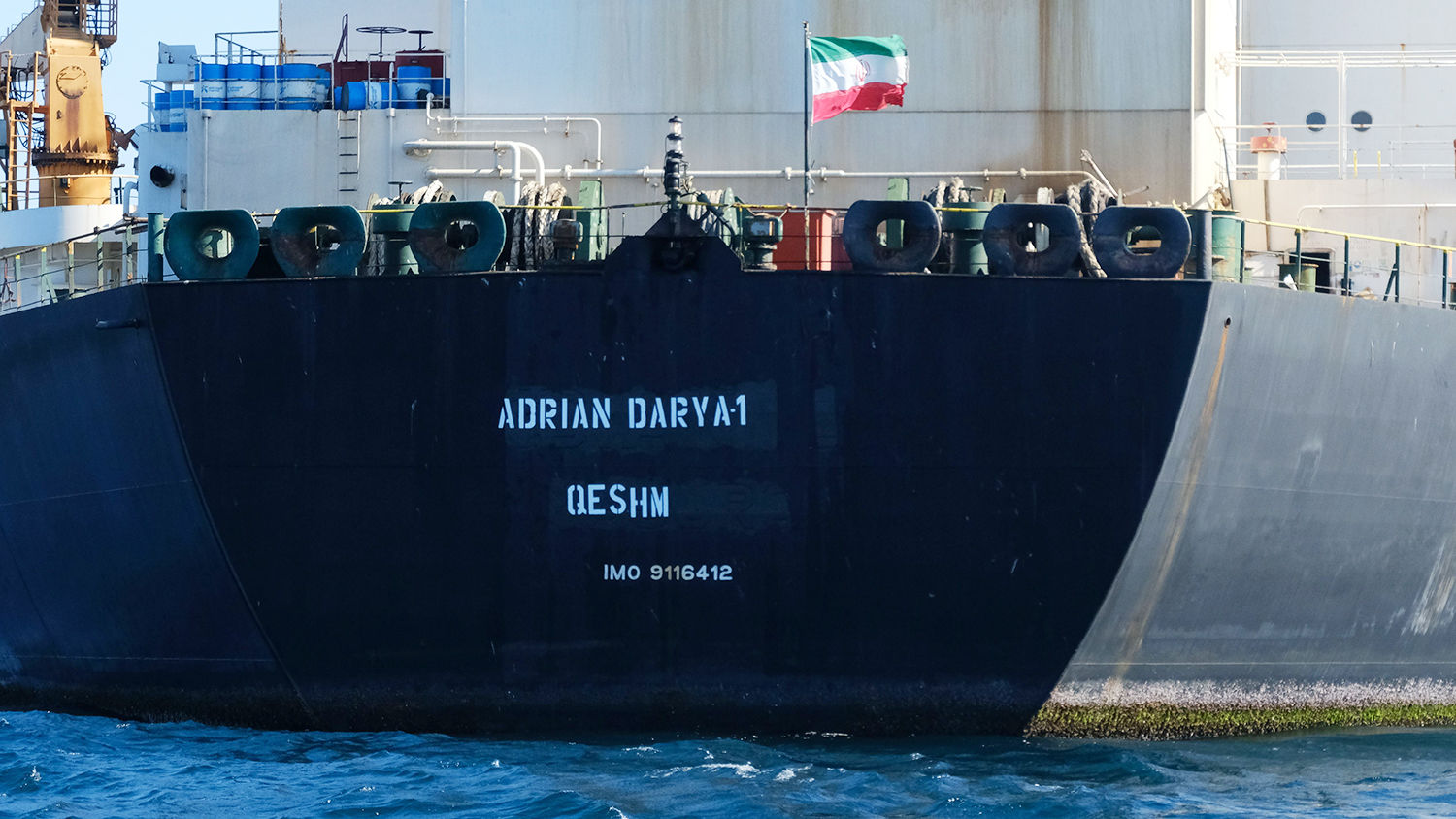 An Iranian flag flutters onboard the Adrian Darya oil tanker, formerly known as Grace 1, off the coast of Gibraltar on August 18
JOHNNY BUGEJA/AFP/GETTY IMAGES

The standoff between Britain and Iran over Iran’s illegal oil shipments has ended ignominiously. On July 4, British Royal Marines detained Iranian oil tanker Grace 1 off the coast of Gibraltar, accusing Iran of violating European Union sanctions by selling oil to Syria. Two weeks later, Iran struck back and seized the British-flagged Steno Impero oil tanker. Iran promised to release the ship in exchange for the release of Grace 1. Despite strong criticism from the United States, Britain released the Iranian vessel after receiving written assurances from the Iranian government that the oil tanker would not sell its 2.1 million barrels of oil in Syria.

After the release, Iran changed the ships name to Adrian Darya 1.

Now we find that Iran broke its word. The ship appears to have off-loaded its 2.1 million barrels of oil to Syria without even a slap on the wrist.

After its release, the vessel continued sailing to the eastern Mediterranean Sea. On September 2, it turned off its transponder while sailing between Cyprus and Syria. Satellite imagery from Maxar Technologies Inc., an American space technology company, indicated the vessel had dropped anchor about three kilometers off the coast of the Syrian port of Tartus.

On September 13, Fabian Picardo, Gibraltar’s chief minister, said that “it is difficult to see” whether Tehran breached an agreement not to sell its oil to the Syrian regime. “You can see from the images that the oil has ended up in Syria, but that’s not to say that there’s a breach of the undertaking,” he said. “We did not have an undertaking that the oil would not end up in Syria. We had an undertaking from the Iranian government that they would not sell the oil to any EU sanctioned entity.”

In other words, Gibraltar’s leader gave Iran a free pass and allowed it to get away with blatantly breaking its word not to sell the oil to Syria.

As images revealed that the oil had arrived at the Syrian port, shipping sources told the Telegraph that the Iranian tanker likely conducted a ship-to-transfer of oil with other smaller vessels.

Sigal Mandelker, a U.S. Treasury official, called this tanker confusion “another game of deception” by Iran, warning that the “world needs to open its eyes” to what Iran is doing.

Europe and the United Kingdom attempted to reason with the unreasonable.

The Root of Iran’s Radical Thinking

The Assad regime in Syria depends on Iranian oil to survive. From 2013 to 2018, Syria imported an average of 2 million barrels of oil a month from Iran. Middle East Institute macroeconomics expert Karam Shaar said, “Without a steady supply of crude oil from Iran, the regime of [Syrian President] Bashar Assad would have faced a complete economic collapse.” In return, Syria has granted Iran important cultural, economic and military investments in Syria: Most notably, allowing Iran to lease the port of Latakia in April and to construct a large military base at Al-Bukamal in August. The Syrian regime has also reportedly given an Islamic Revolutionary Guard Corps-affiliated company a contract to build a new port in the city of Tartus, the same port the Iranian oil tanker off-loaded its oil, which would become a destination of future oil shipments. No matter the circumstances, Iran will make every effort to maintain its grip on Syria. Therefore, it cannot be reasoned with.

Watch Jerusalem editor in chief Gerald Flurry describes the radical Iranian regime’s thinking in his booklet The King of the South: ”So where is Iranian radical thinking leading Iran? To state-sponsored terrorism—which is going to trigger a nuclear World War iii!”

About 79 million Iranians follow the beliefs of Twelver Shiism. This branch of Shiite Islam believes that the Mahdi, their version of the Messiah, will return in a time of chaos and destruction. However, Iran’s theocratic leadership believes that it can hasten the return of the Mahdi by causing world chaos. As a result, the nation’s foreign policy is shaped by its vehement desire to bring about the destruction of the world. Iran’s grip on Syria is part of its goal to conquer Jerusalem and cause the return of its messiah.

In The Anatomy of Israel’s Survival, Hirsh Goodman writes, “Iran’s regime is based on brute power; its calculations cannot be put into a rational context.” The Iranian regime has an agenda, and it will not compromise. Iran is an extremely radical regime impervious to rational thinking.

“We can’t negotiate a victory. Only superior power, and the will to use it, can win. That is the only way to stop state-sponsored terrorism,” Mr. Flurry writes. “Because of U.S. weakness, the Middle East began to look to the king of terror for leadership. It all happened because of American, British and Israeli weakness.”

After the UK released the oil vessel and Iran claimed it had sold its oil, Iran announced that it would release the British Steno Impero, which it had captured in July. The convenient timing raises the question: Is the UK negotiating with terrorists? As a result, Iran got exactly what it wanted.

Meanwhile, the U.S. is also attempting to negotiate a victory. It appears President Donald Trump fired National Security Adviser John Bolton because his views against Iran were too strong. President Trump would rather negotiate a deal than go to war. But making a deal with Iran will not solve the problem.

History shows that Iran will cheat its way around any agreement, which it appears to have done with its oil tanker. Only brute force will stop this tyrannical regime—and that force is on the rise.

In the Bible, the Prophet Daniel recorded a prophecy describing Iran’s belligerent behavior and how it will lead to World War iii: “And at the time of the end shall the king of the south push at him: and the king of the north shall come against him like a whirlwind, with chariots, and with horsemen, and with many ships; and he shall enter into the countries, and shall overflow and pass over” (Daniel 11:40). The Watch Jerusalem, along with its predecessor the Plain Truth, have been proclaiming for decades that “the king of the north” is a united, German-led European superpower in this end time. (For detailed proof, request your free copy of Germany and the Holy Roman Empire.)

Through geography, history, politics and prophecy, Mr. Flurry proves in his booklet The King of the Souththat radical Islamic extremism, led by Iran, is the prophesied “king of the south.” He writes:

The king of the south is about state-sponsored terrorism. That is how Iran became king! Daniel 11:40-43 is an end-time prophecy. It is about a nation that is always pushy in its foreign policy. It pushes until it starts a war. Having such power means that it must be a large oil-producing country. Prophecy shows that this king is close to Jerusalem, Egypt, Ethiopia and Libya.

Who else could it be in this end time but Iran?

Iran is extremely radical—the king over radical Islam. Where is this nation’s pushiness leading? To war!

We can already see Iran beginning to push at the European Union. Iran defied EU sanctions and decided to sell its oil to Syria. While Europe’s stance against Iranian aggression is still weak, Bible prophecy indicates it will begin to strengthen.

Europe wants the Islamic Republic out of Syria and Lebanon and believes it can reason with Iran; however, it will soon realize that it is trying to reason with the unreasonable. Iran will not give up its devotion to create world chaos in order to make its vision of the return of the mahdi a reality.

For more information, please read The King of the South, by Gerald Flurry.