Will Europe Use Its ‘Coordinated Maritime Presence’ Plan to Attack Iran?

There could be more to the EU’s ‘first pilot case’ for future naval deployments than meets the eye.
By Anthony Chibarirwe • September 27, 2019 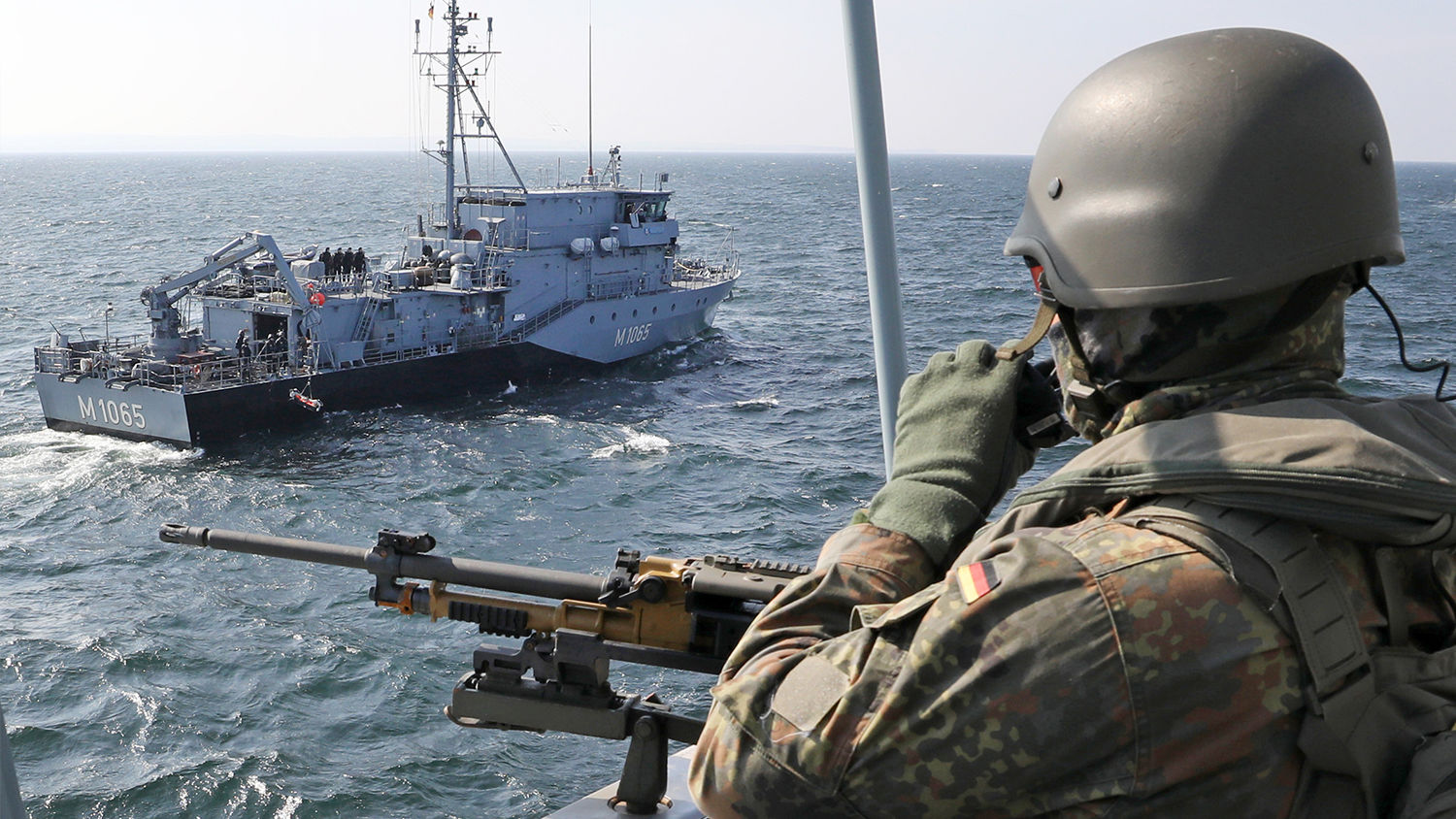 A member of the German security forces stands onboard the corvette Oldenburg, while the ship passes the mine-hunting boat Dillingen of the German Navy.
BERND WÜSTNECK/PICTURE ALLIANCE VIA GETTY IMAGES

As the United States was creating a coalition to protect vessels transiting the Strait of Hormuz from Iranian aggression, a seemingly noncommittal European Union was considering the Gulf of Guinea for the “first pilot case” for future naval deployments to protect vital shipping lanes around the world.

After declining to join the U.S., Britain, Australia and Bahrain in Operation Sentinel, which provides warships to escort cargo vessels in the Hormuz Strait, EU leaders pledged instead to support Europe’s Coordinated Maritime Presence Plan in West Africa’s Gulf of Guinea.

At a press conference that followed a summit of EU defense ministers on August 29, the Union’s foreign policy chief, Federica Mogherini, said:

The concept is still at an initial stage of development, but all member states showed interest in working further on this. We decided to try to finalize technical work to prepare this concept for a first test, for a first pilot case in which we can use it: We mentioned the Gulf of Guinea as a first test we could have of this mechanism …. And I want to stress very clearly that it would not substitute, but it would complement and it would be in addition to the traditional military operations that the European Union has and can continue to have in the future.

Why the Gulf of Guinea?

Earlier in her speech, Mogherini said, “[W]e are seeing growing demand for a European Union role as a maritime security provider not only in our region, but also further away … where the European Union and the member states have a clear interest in guaranteeing the freedom of navigation and the security of the maritime routes.”

The Gulf of Guinea certainly needs more robust maritime security. Over the past few years, the Gulf of Guinea has surpassed Southeast Asia and the Horn of Africa as the most dangerous shipping lane. The International Maritime Bureau reported that in 2018, the Gulf of Guinea accounted for all of the world’s six recorded hijackings, 13 of the 18 ships that were shot at, 78 of all the 83 crew members kidnapped for ransom, and 130 of all 141 hostages taken at sea. The bureau believes that these recorded incidences are probably only half of all the attacks that actually happened last year.

The Gulf’s 6,000 kilometers of coastline stretches from Angola up to Senegal. “[P]irates have struck across the region, but are primarily a Nigerian problem,” the Economist wrote on June 29. “Unemployment is at least 20 percent, and banditry and oil theft on land are widespread. [T]he largest international association representing shipowners issued a statement in January calling for the EU, America and China to deploy forces to the Gulf of Guinea. [Nigeria’s] armed forces have their hands full with a jihadist insurgency in the northeast, banditry in the northwest, and clashes between farmers and herders in the ‘middle belt’—all of which are far deadlier than piracy.” Rampant corruption in these countries has exacerbated the problem.

This is problematic for a region that supplies 10 percent of the EU’s oil. It certainly provides Europe with good reason to get more involved in the region.

But could there be more to the EU’s Coordinated Maritime Presence than meets the eye?

A Possible Preparation for Hormuz

In the past few months, Iran has been harassing and seizing foreign ships in and around the Strait of Hormuz. Through its proxies, it also has been firing at them with armed drones.

But the EU has been reluctant to confront Iran in a meaningful way, focusing more on its pilot project in the Gulf of Guinea.

That’s partly because it doesn’t want to jeopardize the Iran nuclear deal and also because, as Fondation euractiv noted, “the EU looks relatively insulated from the incidents in the Strait of Hormuz” thanks to a “more globally diversified oil market.”

Yet when Mogherini was asked during her August 29 press conference about any links between the EU’s Gulf of Guinea plans and Iranian destabilization in the Strait of Hormuz, she said:

[T]he Coordinated Maritime Presence concept … is not linked to any specific tension, not in particular related to the tensions around the [Persian] Gulf or the Strait of Hormuz, but as an instrument to better coordinate member states’ naval presence in a certain specific area that would be recognized as strategically important for the European Union as such, making the best of the naval national assets in a coordinated European manner. [T]here was a general consensus on the fact that the first pilot case, once the technical preparation is finalized, would rather be a different situation and a different area from the Strait of Hormuz. I would not exclude that that could be an option in the future but, again, it is definitely too early to say that today that could be an option for the European Union to use in that area.

The EU’s relatively obscure Coordinated Maritime Presence in the Gulf of Guinea could be a part of its preparations for a potential confrontation with Iran in the Strait of Hormuz!

The Germans are excellent war strategists and warriors. They are savvy enough to realize that they will never have peace with Iran. They know that sooner or later, their two religions—their two civilizations—will clash.

This scripture describes a time when Germany’s Catholic empire will wage all-out war, throwing everything it has at radical Islam—and dominating it like a violent flood pouring in!

Here is the question we need to focus on: How could Germany do this so easily, so effectively and so quickly?

Berlin will not be able to overwhelm Iran in the near future unless it is working on a special strategy right now. …

Germany has expected to clash with Iran, and it has been working on a strategy for a decade or more. That strategy is almost complete. …

The king of the north couldn’t come like a whirlwind unless it surrounds Iran and its allies. That is being meticulously planned right now! Germany is busy preparing to execute a whirlwind strategy to rush upon and overflow Iran.

Germany and the European Union are not only surrounding Iran and making intelligent, strategic deployments around Iran’s sphere of influence, they are also establishing mechanisms that will prepare them for a future, inevitable clash with Iranian terrorism.

Keep your eye on Europe’s engagements in the Middle East and its operations in places farther away—like the Gulf of Guinea. What you’ll see might be some of Europe’s final preparations to perfect its strategies for a spectacular clash prophesied in the Bible. For more information, read Mr. Flurry’s free booklet Germany’s Secret Strategy to Destroy Iran.