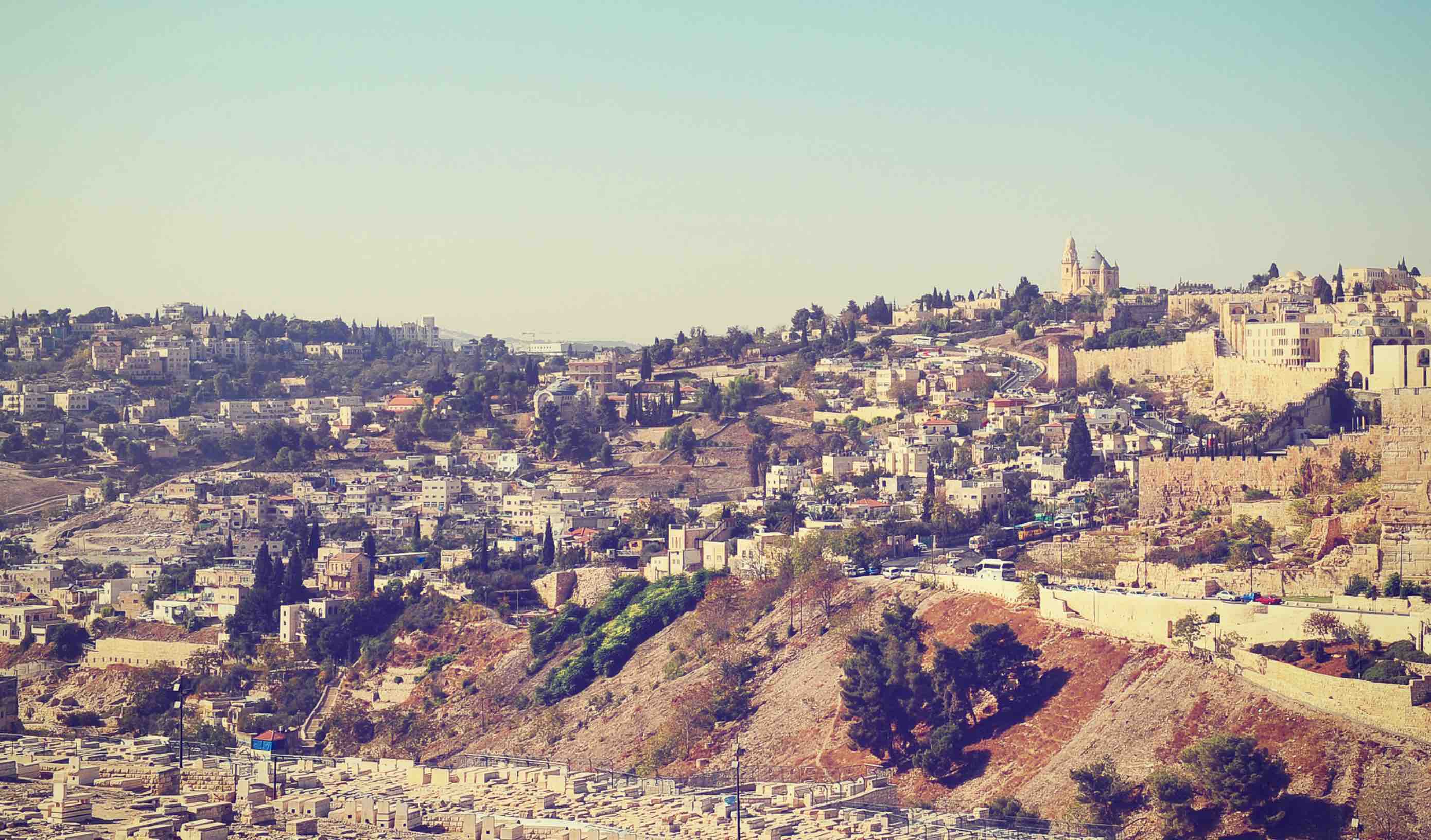 Welcome to Watch Jerusalem! I want to tell you why we created this magazine. Israel has plenty of newspapers and magazines that cover local news and trends, as well as biblical archaeology and history. Why do we need another?

King Solomon answers this question. “Where there is no vision, the people cast off restraint; But he that keepeth the law, happy is he” (Proverbs 29:18). The word vision means, “a mental image of what the future will or could be like.” The Hebrew word for vision here is chazon, which refers to divine communication. Solomon is describing man’s need for vision, for hope and inspiration, and for divine communication.

This verse encapsulates the purpose of Watch Jerusalem. We want to educate and inspire readers with the vision of Jerusalem’s past, present and future.

Watch Jerusalem proclaims the wonderful vision in Israel’s ancient past.

Israel today is also the epicenter of some major issues and trends, both regionally and globally. There is a lot of critical daily news in Israel. There is enormous vision here too, even though the news media today rarely conveys it. But Israel’s ancient history and the writings of the Jewish prophets give tremendous meaning and vision to Israel’s domestic politics, to the terrorist threat, to the ongoing conflict with Iran and its proxies in Lebanon and Gaza, and to the many other news events and trends.

Watch Jerusalem puts contemporary events in historical context, and shares the wonderful vision of where these events are leading.

King Solomon wasn’t the only one to discuss vision and show how important it is for individual and national health. Many Jewish priests, prophets and leaders talk about vision, and especially the importance of the Jerusalem vision.

The Jewish nation was destroyed by Babylon in 585 b.c.e. The Jews had forgotten the God of their own Bible. Jerusalem and the temple were demolished. Psalm 137 is about a group of those Jews who were taken as captives to Babylon. They were deeply discouraged. However, they learned one of the most inspiring lessons in the Bible.

“By the rivers of Babylon, There we sat down, yea, we wept, When we remembered Zion” (Psalm 137:1). The captives had forgotten righteous Zion. They wept bitterly when they remembered Zion.

“Upon the willows in the midst thereof We hanged up our harps. For there they that led us captive asked of us words of song, And our tormentors asked of us mirth: ‘Sing us one of the songs of Zion.’ How shall we sing the Lord’s song In a foreign land?” (verses 2-4). The captives were going to sing the Lord’s song. They were going to sing God’s song, with lyrics from their own Bible! It was a part of their worshiping of the true God.

Jeremiah the prophet warned them repeatedly and with real authority. They threw him into prison, and he was almost killed. Nebuchadnezzar released Jeremiah when he led the Babylonian military into Jerusalem.

Many of the Jews repented in captivity.

In verses 5-6, the psalmist wrote: “If I forget thee, O Jerusalem, Let my right hand forget her cunning. If I remember thee not; Let my tongue cleave to the roof of my mouth, If I set not Jerusalem Above my chiefest joy.” Written while in captivity to the Babylonians, this beautiful song expresses the deep yearning of the Jewish people for Jerusalem. It is a perpetual reminder to the Jews to hold fast to their vision of Jerusalem.

The Bible is filled with passages like this; passages that describe how important it is to cherish the Jerusalem vision.

They had forgotten Jerusalem. That is why they were captured. They did not have God’s protection. But in captivity, they exalted Jerusalem above their chief joy! They had resurrected their wonderful vision of Jerusalem! The Jews now had a righteous, beautiful attitude.

When the Messiah comes, He is going to sit on David’s throne and bring salvation to all mankind. The Messiah will rule on that throne forever (Isaiah 9:7). Jerusalem will be the capital of the Earth and the universe.

This is the Jerusalem that the captives had forgotten. They repented in captivity and remembered this most inspiring vision in their Bible!

These Jews proclaimed to the Babylonians that they too were going to be destroyed. And they were.

These captives served God by delivering an extremely difficult message, in spite of what their captors thought. They could have lost their lives because of the warning they delivered to the Babylonians. They were willing to die for the Jerusalem vision they built in captivity! When they repented, God gave them strong courage.

This is real history and real prophecy that our loving God wants all of us to deeply understand. The coming of the Messiah is at the door. This is the living hope we all need.

The Prophet Isaiah also wrote extensively about Jerusalem. Consider Isaiah 40, which is about both the past and the future, and illuminates the Jerusalem vision. Verse 9 (JPS) says, “O thou that tellest good tidings to Zion, Get thee up into the high mountain; O thou that tellest good tidings to Jerusalem, Lift up thy voice with strength; Lift it up, be not afraid; Say unto the cities of Judah: ‘Behold your God!’”

Jerusalem and the State of Israel are filled with history and events that declare, “Behold your God!” Traveling the land of Israel is like walking through the Hebrew Bible. There are biblically significant archaeological excavations, artifacts and ruins all over the country. Many political events and trends in Israel are connected to the coming Messiah. In its own way, each of these declares, “Behold your God!”

No city or territory on Earth has a past, present or future filled with as much meaning and hope.

Watch Jerusalem will highlight Israel’s ancient past, present and future, and show how it declares, even in the 21st century—“Behold your God!”

Watch Jerusalem is a new magazine, but it is not a new work. This magazine is part of a work in Israel that continues the legacy of the late Herbert W. Armstrong. A prolific author, educator, philanthropist and theologian, Mr. Armstrong established an impressive work in Israel in 1967, more than 50 years ago.

Mr. Armstrong traveled the world teaching the true causes of the problems facing humanity and their ultimate solutions. He published the Plain Truth magazine, read by 1 out of every 583 people on Earth; broadcast the World Tomorrow program on 382 television stations and 36 radio stations; and founded three campuses of the well-regarded Ambassador College.

Mr. Armstrong directed many important projects, but his greatest passion, especially in his final years, was for Jerusalem and the Jewish state. Between 1967 and 1986, he visited Jerusalem more than 50 times. He befriended all of Israel’s prime ministers and presidents during this time. In 1968, Mr. Armstrong and Ambassador College formed what Moshe Kol, Israel’s tourism minister at the time, called “an iron bridge that can never be broken” with Hebrew University and the State of Israel.

Mr. Armstrong and Ambassador College supported multiple archaeological excavations in Jerusalem, including the massive Temple Mount excavations led by Benjamin Mazar and Hebrew University. Mr. Armstrong, Mr. Mazar and several politicians met numerous times in the Knesset. The Jews were much more united at that time than they are today. They are dangerously divided in 2019. (So are Britain and America.)

During America’s Civil War, Abraham Lincoln said, “A nation divided against itself cannot stand.” He boldly stated that America had forsaken God!

Is that true of America, Britain and the Jewish state today? We believe you can prove that it is!

When Mr. Armstrong visited Jerusalem, he could often be seen walking arm in arm with Jerusalem Mayor Kollek around the city. The mayor would share his vision of modern Jerusalem, and Mr. Armstrong would give the mayor feedback and ideas about his plans and projects.

In 1983, during a luncheon with Teddy Kollek, Mr. Armstrong toasted the mayor’s successful reelection. The mayor smiled and responded from his chair, “Jerusalem at this time does not have a prophet—you will have to be our prophet.”

Like David and Solomon, Isaiah and the psalmist, and like Mayor Teddy Kollek, Mr. Armstrong had an extraordinary vision of Jerusalem and the Jewish state. Like the great Jewish figures of antiquity, he understood that there is tremendous hope and inspiration bound up in the past, present and future of this city and nation. And he devoted a lot of energy to sharing this hope.

Watch Jerusalem proudly embraces and continues this legacy—a legacy that follows the immortal words of Isaiah the prophet in declaring to the cities of Judah, “Behold your God!”