The important trade artery is flanked by Iran-backed militias on one side and a large Iranian military base on the other.
By Warren Reinsch • October 3, 2019 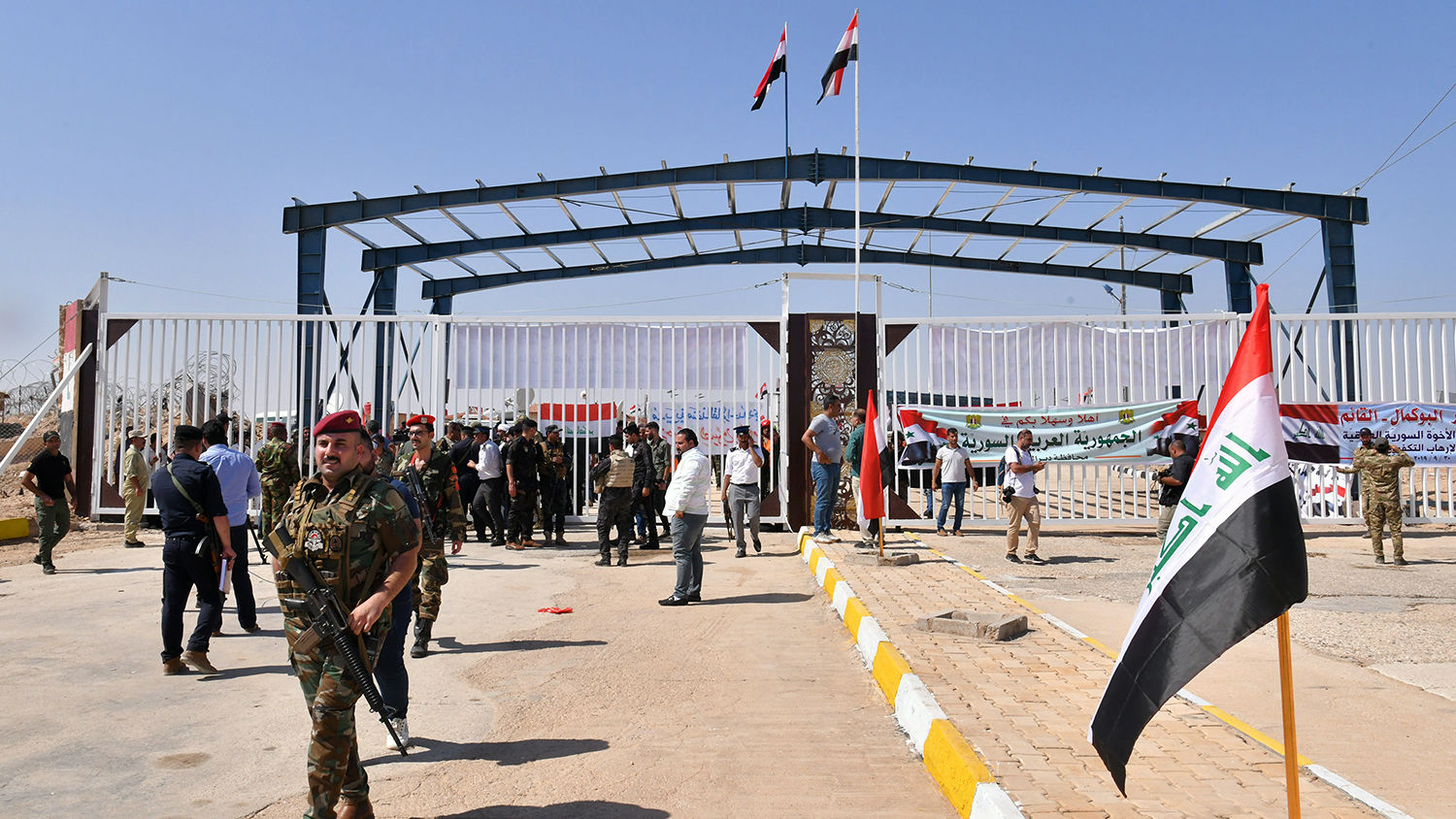 Syrian security forces gather on the Syrian side of the border crossing between Albu Kamal in Syria and Al-Qaim in Iraq, on September 30 after the crossing reopened.
-/AFP/GETTY IMAGES

After eight years of closure, Iraq reopened its Qa’im border crossing with Syria on Monday. The crossing, which is expected to revitalize Syrian-Iraqi trade, is also a critical benchmark in Iran’s ploy to bring the vast swath of land from Iran to the Mediterranean under its control. Jerusalem Post’s Middle East expert Seth Frantzman said that the reopening of the Qa’im border crossing “may enable Iran to move militias and weapons across” much easier and quicker than before.

Since 2011, the border crossing has been open only to government and military traffic; now, the crossing is open for civilians and trade.

A security source told Reuters that the Iraqi Popular Mobilization Units will help secure the Iraqi side of the crossing. Large deployments of these Iran-backed Shiite militias have already been seen near the border. The militias, which are an official state institution, receive their payment from the Iraqi government. They are likely there by official order of the Iraqi government. However, many still retain their loyalties to Iran for its funding, leadership and training during the Iraqi Civil War against the Islamic State.

On the Syrian side of the border crossing, Iran has been building an extensive military base. Israeli-based satellite imagery analysis firm ImageSat reported that Iran’s al-Bukamal base has seen “intense construction” over the last few months. This Iranian-controlled base has seen the construction of new fortifications, access roads and warehouses capable of storing precision-guided missiles. Frantzman called the base and border crossing a kind of “highway of pro-Iranian power.”

The same day as the reopening of the border, the Times of Israel quoted the commander in chief of Iran’s Islamic Revolutionary Guard Corps, Hossein Salami, as saying that the destruction of Israel “is no longer … a dream, [but] it is an achievable goal.”

For several years, Iran has been working diligently to establish a 1,200-kilometer land route connecting Tehran to the Mediterranean Sea called the “Shia Crescent” as a part of its desire to destroy the Jewish State and conquer Jerusalem. Control of this border crossing is a crucial step toward that goal.

But the United States has a military base in Iraq less than 320 kilometers from the new Iranian compound and border crossing. In Syria, the al-Tanf base, where U.S. forces enforce a 55-kilometer-radius demilitarized zone, is a massive concrete barrier on Iran’s radical Islamic highway. Any unauthorized entry into the zone is quickly dealt with by the U.S. military.

Additionally, Israel has conducted thousands of air strikes against Iranian targets in Syria, and it has allegedly targeted and destroyed several Iranian facilities storing missiles in both Iraq and Syria, including Iran’s newly constructed al-Bukamal base. Despite the recent attacks, several journalists, soldiers and civilians joyfully gathered at the reopening of the border crossing.

“We are determined to eliminate this dangerous project,” Israeli Prime Minister Benjamin Netanyahu stated on August 29. “The aim of the publication today is to convey a message that we will not sit by and allow our enemies to arm themselves with deadly weapons directed at us.”

As Iran continues to push its way toward Jerusalem and Israel adopts a new increasingly preemptive security doctrine, conflict is inevitable. A dramatic shift is about to occur. Although Iran is one of Syrian President Bashar Assad’s most adamant supporters, the Bible indicates that there will be an Iran-Syria divorce.

“For they have consulted together with one consent: they are confederate against thee: The tabernacles of Edom, and the Ishmaelites; of Moab, and the Hagarenes; Gebal, and Ammon, and Amalek; the Philistines with the inhabitants of Tyre; Assur also is joined with them: they have holpen the children of Lot. Selah” (Psalm 83:5-8). The Hagarenes were a semi-nomadic people who lived in the desert region between the lands of Gilead, Bashan and the Euphrates River, which is now known as Syria, and is actually referring to the modern-day nation of Syria.

Psalm 83 says that these moderate Arab nations will ally themselves with the German-led European Union with the purpose of destroying Israel. The fulfillment of this Psalm 83 prophecy will occur after another critical Bible prophecy.

Daniel 11:40 says that “at the time of the end” a radical Islamic power known as “the king of the south” will have an aggressive foreign policy and that will “push” at the “king of the north,” or German-led Europe. In “How the Syrian Crisis Will End,” Watch Jerusalem editor in chief Gerald Flurry wrote, “Daniel 11:40 will unfold just before Psalm 83 is totally fulfilled. Germany and Iran will ignite a spectacular military clash. The German superpower will crush the ‘king of the south.’ Then the Arab nations listed in Psalm 83 will ally with Germany.”

Reopening the Qa’im border crossing could give Iran significantly more power to push at Europe. The crossing allows Iran to solidify its grip on Lebanon and Syria by transferring more troops and armaments, especially missiles, to its proxy forces.

As Iran’s sinister movements in the region continue to threaten Israeli and European security interests, conflict could erupt.

For more information about the coming allegiance-shifting conflict in the Middle East, request your free copy of The King of the South, by Gerald Flurry.