With worsening economic conditions, the hungry and repressed populace is beginning to rise up.
By Watch Jerusalem Staff • October 7, 2019 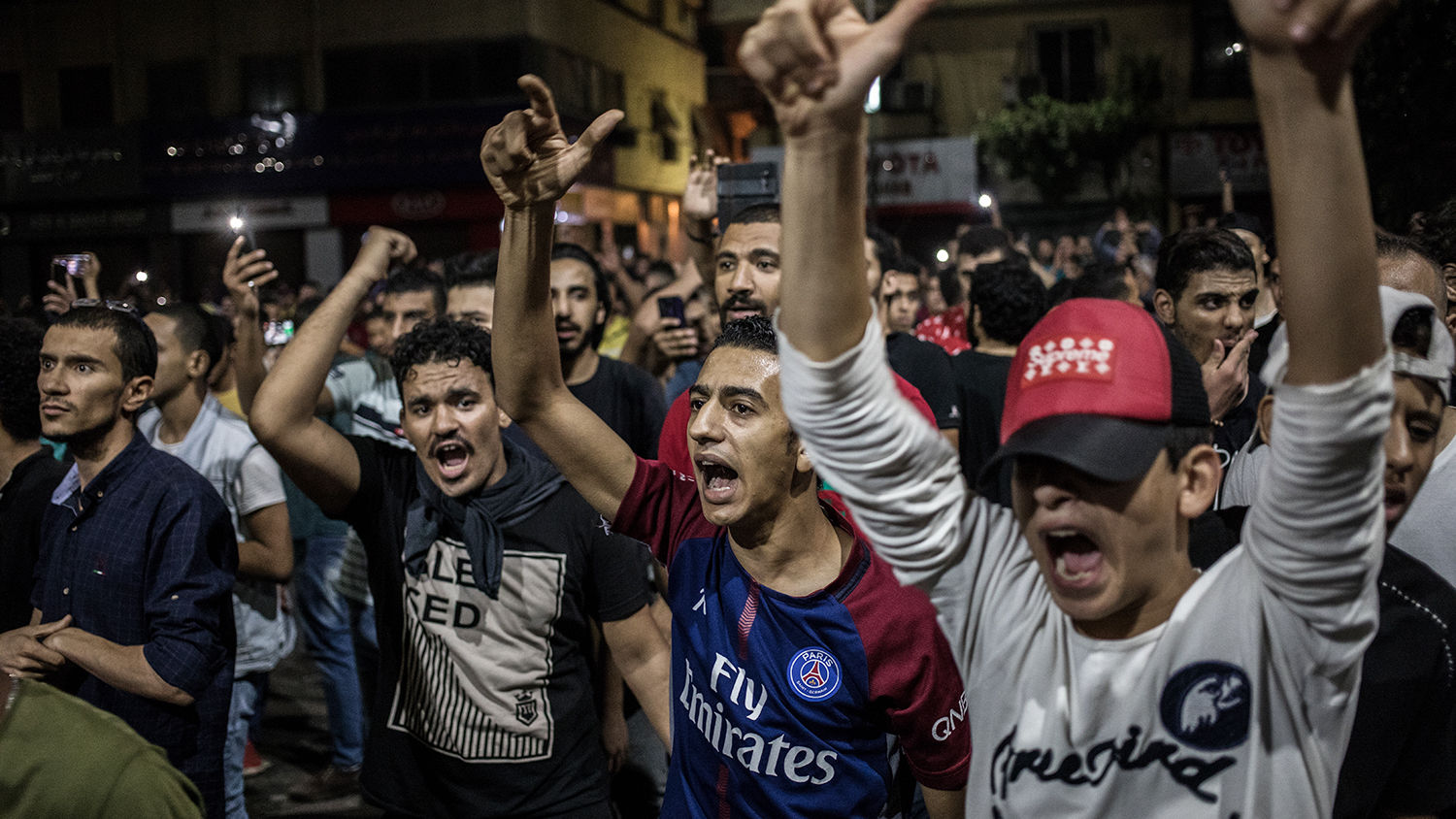 Egypt risks repeating the 2011 Arab Spring that brought radical change to the Middle East. Since September 20, riots calling for the resignation of President Abdel Fattah al-Sisi have spread throughout the country despite government attempts to clamp down on the rebellion.

The protests began when Egyptian businessman and actor Mohammed Ali accused Sisi of corruption in videos posted online. Ali, who is currently living in self-imposed exile in Spain, accused Sisi of spending millions of dollars on luxury palaces and hotels. Sisi dismissed these accusations as “lies and slander,” but the videos quickly went viral and became the spark that ignited the discontent already building in the repressed and impoverished populace.

Sisi rose to power in 2014 with a promise to improve the country’s financial situation after the hardships endured under the previous regime. But government figures show that one third of Egyptians now live below the poverty line, an increase of more than 4 million people since 2015. And the people are not happy.

While demonstrations have taken place around the country, they have mainly centered at Tahrir Square, Cairo, the epicenter of protests that unseated Hosni Mubarak in 2011.

Sisi and his supporters are issuing a strong pushback against the protests. Increased security forces have used tear gas, beatings, rubber bullets and live bullets to disperse rioters. The strictly controlled media has begun a pro-Sisi campaign and issued warnings against opposition figures. Police throughout Cairo are stopping and searching pedestrians, sometimes searching phones for political content.

While this has deterred some from protesting, many are still determined. Fatma, a teacher from coastal Alexandria, said that she will continue to protest “because it cannot get worse than the current situation. We are not worth anything in this country.”

Others are afraid that the discontent will only make the economic conditions and repression worse. The risks of speaking out are increasing. “There is a lot of wrong things in the country. Some people are literally eating from the garbage. But protesting and riots will make things worse,” said Cairo fast-food worker Sayed. “God knows I agree with what they say, but I’m alone and I have no one to defend me. So I can only focus on putting bread on the table.”

Since protests began, police have arrested more than 2,000 people, according to civil rights groups. Among those arrested is Alaa Abdel-Fattah, a prominent figure of the 2011 Arab Spring in Egypt. Although he had no confirmed part in the current protests, his arrest is seen as a warning to others who take part in anti-government demonstrations. Officials have also arrested many other human-rights activists, members of opposition parties, and critics of Sisi’s regime, whether or not they had a part in the recent riots.

Some of those arrested have confessed to being part of Islamic movements, including the Muslim Brotherhood.

Since Sisi began his time in office, he has cracked down on various forms of liberals, opposition and Islamist groups, including the banning of his predecessor’s group, the Muslim Brotherhood. Some human-rights groups claim that his crackdown is the worst in recent memory. He has arrested thousands of Islamists, secular activists and journalists, and has killed many. There are a reported 60,000 political prisoners in Egypt. The Muslim Brotherhood especially has been targeted since Sisi’s ascent. Many of those who weren’t jailed or forced into exile have been killed. One day in August 2013, some 800 Brotherhood supporters were killed.

Several Egyptian authorities, including Sisi and the state media, have accused Islamic groups such as the Muslim Brotherhood of being behind the current riots. Although this does not appear to be true, the group has been capitalizing on the unrest and dissatisfaction. It has rallied its supporters online, spreading anti-Sisi messages. With the severe economic situation, the Muslim Brotherhood has the potential to stir support from a large number of people.

On September 24, the Interior Ministry reported that six Muslim Brotherhood members were killed in a shootout with Egyptian police on the outskirts of Cairo. They were accused of “planning a series of terror operations.”

The current unrest in Egypt reveals a desire for change—any change. The fact that the Muslim Brotherhood, with heavy support from Iran, is taking advantage of the unrest could indicate that an end-time Bible prophecy is soon to be fulfilled.

Daniel 11:40-42 prophesy that “at the time of the end shall the king of the south push at him: and the king of the north shall come against him like a whirlwind, with chariots, and with horsemen, and with many ships; and he shall enter into the countries, and shall overflow and pass over. He shall enter also into the glorious land, and many countries shall be overthrown: but these shall escape out of his hand, even Edom, and Moab, and the chief of the children of Ammon. He shall stretch forth his hand also upon the countries: and the land of Egypt shall not escape.”

In a January 2006 co-worker letter, he explained further, “We have said for years that Egypt has been a friend to the West, but because of this prophecy [Daniel 11:42], we also said that could change. … As the MB [Muslim Brotherhood] grows more popular it will strengthen its ties with Islamic powers throughout the region—especially Iran. [W]atch for Cairo to distance itself from America. Should the MB ever take control, there is no doubt that a strong alliance between Iran and Egypt will be built.”

Unrest is spreading throughout Egypt, and the Bible reveals that it will bring radical change with it, whether now or in the near future. The current unrest is not on the same scale as the 2011 riots, so they may well not topple the government. But the demonstrations show there are many forces anxious to get the Muslim Brotherhood or someone similar into power when they get the chance.

In a time of unrest and uncertainty, when a government fails to provide solutions, people want change. The Muslim Brotherhood could capitalize on this dissatisfaction. Radical change in the form of the prophesied alignment between Iran and Egypt could come quickly, but you can know where these events are leading ahead of time.

For a more thorough explanation of these prophecies and to prove the identity of the king of the south for yourself, order Mr. Flurry’s free booklet The King of the South.