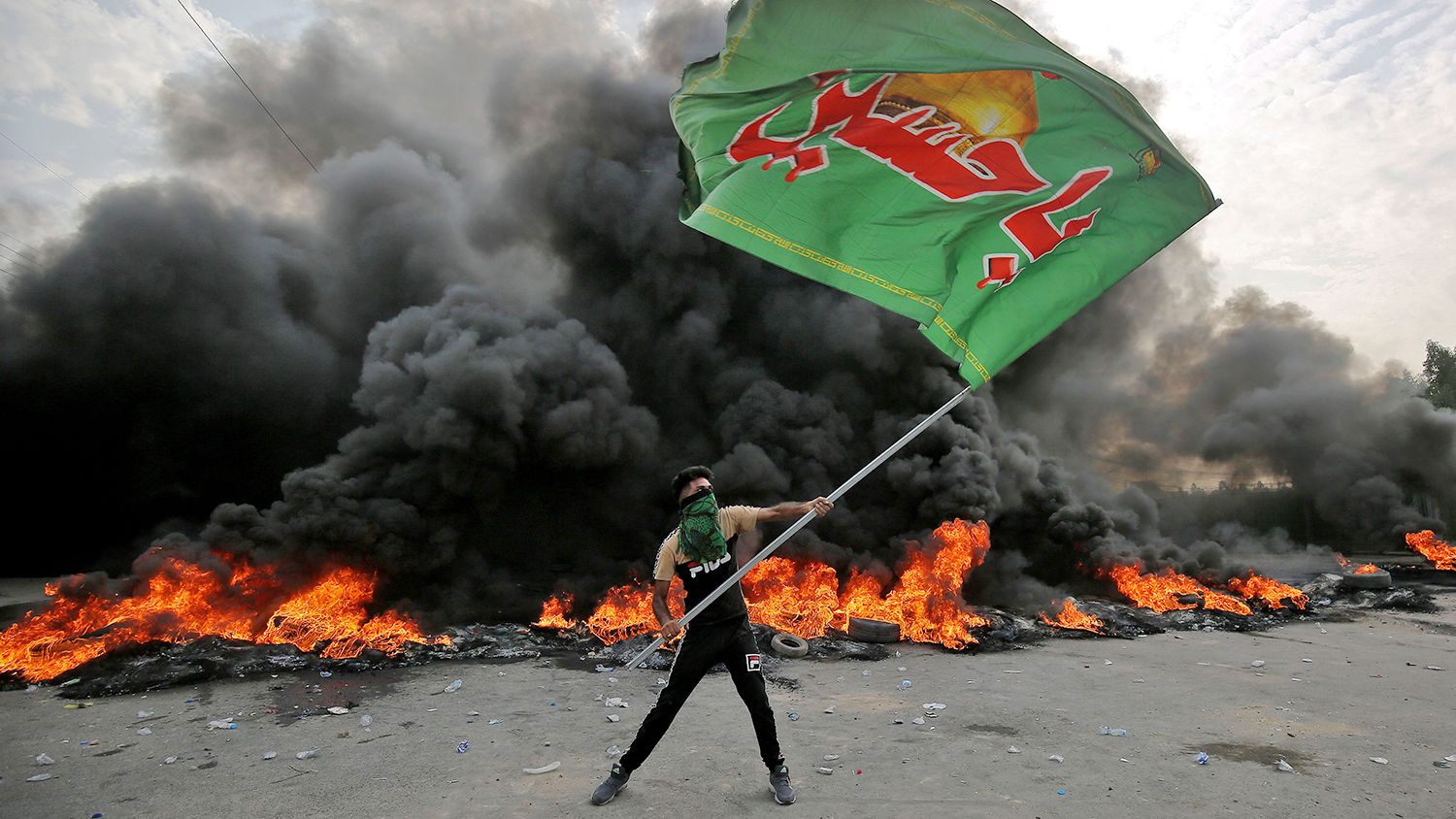 An Iraqi protester in Baghdad on October 2 waves a flag showing the Shiite Muslim slogan in Arabic with the logo of the Iraqi Hezbollah flag during a demonstration against state corruption, failing public services, and unemployment.
AHMAD AL-RUBAYE/AFP VIA GETTY IMAGES

Iraq’s largest protests in more than a year erupted on Tuesday as thousands of anti-government demonstrators gathered in Baghdad to express anger about unemployment, economic poverty, government corruption and Iranian infiltration.

Late Tuesday evening, the protesters spilled onto the Jumuhurya Bridge to cross the Euphrates River into Baghdad’s Green Zone, where many consulates and government buildings are located. At least one explosion has occurred in the Green Zone since the protests began. Reuters reported that as the crowd crossed the bridge, the Iraqi police used tear gas, rubber bullets, stun grenades and water cannons to disperse the mob, occasionally using live ammunition as a final resort.

By Friday the death toll had risen to around 50 and several hundred had been wounded.

Protests in Nasiriyah, about 320 kilometers southeast of Baghdad, also turned violent. The Baghdad Post reported that on Wednesday morning the Iraqi Army was deployed in Nasiriyah to help subdue the protests. Because the protesters are using social media to organize their riots, the Iraqi government has blocked Facebook, Twitter, WhatsApp, Instagram and other social media platforms and messaging apps.

After the second day of rioting, the Iraqi government imposed an indefinite curfew. According to the bbc, Iraqi Prime Minister Adil Abdul Mahdi said “all vehicles and individuals are totally forbidden to move” in Baghdad beginning at 5 a.m. on Thursday. Ambulances, government employees in hospitals, electricity and water departments, religious pilgrims and travelers to and from the city’s airport were exempt from the curfew. Restrictions have already been imposed in the southern cities of Nasiriya, Amara and Hilla, where protests have been held.

One of the protesters, 21-year-old Fadhel Saber told the Associated Press, “We want this government to be changed. This is a government of political parties and militias.” The protesters want a change in leadership. They see what is happening in the Iraqi government and are attempting to stand against it.

According to Jerusalem Post Middle East expert Seth Frantzman, the protests are, in part, a response to the recent dismissal of a popular hero from the Iraqi Civil War, Lt. Gen. Abdul Wahab al-Saadi of Iraq’s elite Counter-Terrorism Service, who was pushed aside by the prime minister under mysterious circumstances. In “Did Iraq’s Prime Minister Gamble on Sidelining War Hero?” on October 1, Frantzman wrote:

This has led to questions about the politics behind the removal. Some reports indicate that the Popular Mobilization Units [pmu], a group of mostly Shiite militias that also have a political party in parliament, might have lobbied for his dismissal. This leads to questions about Iran’s involvement and allegations that the pmu are seeking to become Iraq’s version of the Islamic Revolutionary Guard Corps, reducing the army’s power and creating a separate armed force. Removing a key cts [Counter-Terrorism Service] commander might help pave the way for increased pmu power.

Iran has conquered Iraq. The Popular Mobilization Units, an umbrella organization funded by the Iraqi government, is comprised of about 50 majority Shiite militias that were either created by, received training from, or were led by Iran during the Iraqi Civil War. In recompense of its support against the Islamic State, many of these militias still retain their loyalty to Iran. The militias’ political wing, the Fatah Coalition, won the second-greatest number of seats in the Iraqi parliament during the May 2018 elections. As a result, Iran, through the pmu, controls large portions of Iraq’s military, governing body and several government ministries.

Through the pmu, Iran has conquered Iraq—a trend Watch Jerusalem has followed as far back as 1992. In the June 2003 issue of Watch Jerusalem’s sister magazine, the Trumpet, editor in chief Gerald Flurry asked, “Is Iraq About to Fall to Iran?”

Similar protests occurred a decade ago. The Iranian Green Movement began in June 2009 and saw large-scale protests throughout Iran begin peacefully but then erupt into violence. The riots, which were also organized via social media, sought to oust Iranian President Mahmoud Ahmadinejad from office after he decisively won what has since been proved was a rigged election. Similar to Iraq’s protests today, Iranians living under poor economic conditions saw the corruption and wished for a change in government.

In response to the protests, however, Iran brought down its iron fist. The police and the paramilitary Basij Forces, which acts as the eyes and ears of the Iranian regime, were called upon to stamp out the protests. The governmental retaliation saw many heinous crimes, including the arrest, imprisonment, torture and rape of thousands of men, women and children by the Islamic Revolutionary Guard Corps.

Wall Street Journal reporter Jay Solomon records in The Iran Wars how far then United States President Barack Obama went to avoid supporting the Green Revolution in Iran. “The agency has contingency plans for supporting democratic uprisings anywhere in the world. This includes providing dissidents with communications, money and, in extreme cases, even arms,” writes Solomon. “But in this case the White House ordered it to stand down.”

In doing so, Mr. Obama made it clear to the world that the U.S. was not seeking regime change in Iran. “So many wars have been fought over misunderstandings, misinterpretations, lack of effective diplomacy,” former Secretary of State John Kerry told Solomon in a 2016 interview. “War is the failure of diplomacy.”

This raises the question, are the Iraqi protests President Trump’s Green Movement moment? If so, how will he respond?

Bible prophecy seems to indicate that he, too, will miss his Green Movement moment.

In The King of the South, Mr. Flurry writes, “The more Iraq falls to this terrorist nation, the more Iran virtually controls this whole area—which contains most of the world’s oil!”

Control over Iraq’s oil and access to its economy will give Iran considerably more power. It has already conquered Iraq. How much longer before its control and influence spreads throughout the Middle East and North Africa?

Mr. Flurry continues: “The radical Islamic movement, led by Iran, is very strong in Egypt, Algeria, Libya and Ethiopia. This religion will probably take control of these countries very soon. Iran appears to be on the verge of becoming a world superpower.”

Daniel 11:40 prophesies of an end-time Middle Eastern power bloc called “the king of the south.” Mr. Flurry identifies radical Islamic extremism, led by Iran, as this prophesied king of the south. Verses 42-43 reveal that this conglomeration of Islamic nations will include Ethiopia, Egypt and Libya. This Islamic power will “push” at “the king of the north,” a German-led European Union, sparking World War iii.

Notice that the U.S. is missing from this prophecy. It will not be involved in this clash of civilizations.

“Arab-Iranian control over the Mediterranean Sea and the Red Sea could be the reason the U.S. is not involved in this Mideast war in Daniel 11,” Mr. Flurry writes. “Our economy is shaky, the dollar is extremely weak, and Iran could threaten or even cut all our oil and wreck the U.S. economy to keep America out of the war.”

Leviticus 26:19 says that God will “break the pride” of America’s power. The U.S. has the greatest military in the world, yet it lacks the will to use it. President Trump is more likely to work out a deal than send troops to a foreign country.

“[W]e can’t win this war unless we also remove Iran’s leadership. But American and British leaders lack the understanding and courage to win,” writes Mr. Flurry. “Our peoples lack the will to win this war against terrorism.”

Trump’s Green Movement moment has come. Whether or not he decides to intervene, Bible prophecy indicates that this movement will not succeed and that Iran will continue its methodical conquest of Iraq. If Iraq turns to the Popular Mobilization Units in response to the riots, Iran’s power will grow.

For more information about Iran’s identity as the king of the south and its conquest of Iraq, request your free copy of The King of the South.