The Danger in Division

A lesson from the First Jewish Revolt
By Warren Reinsch 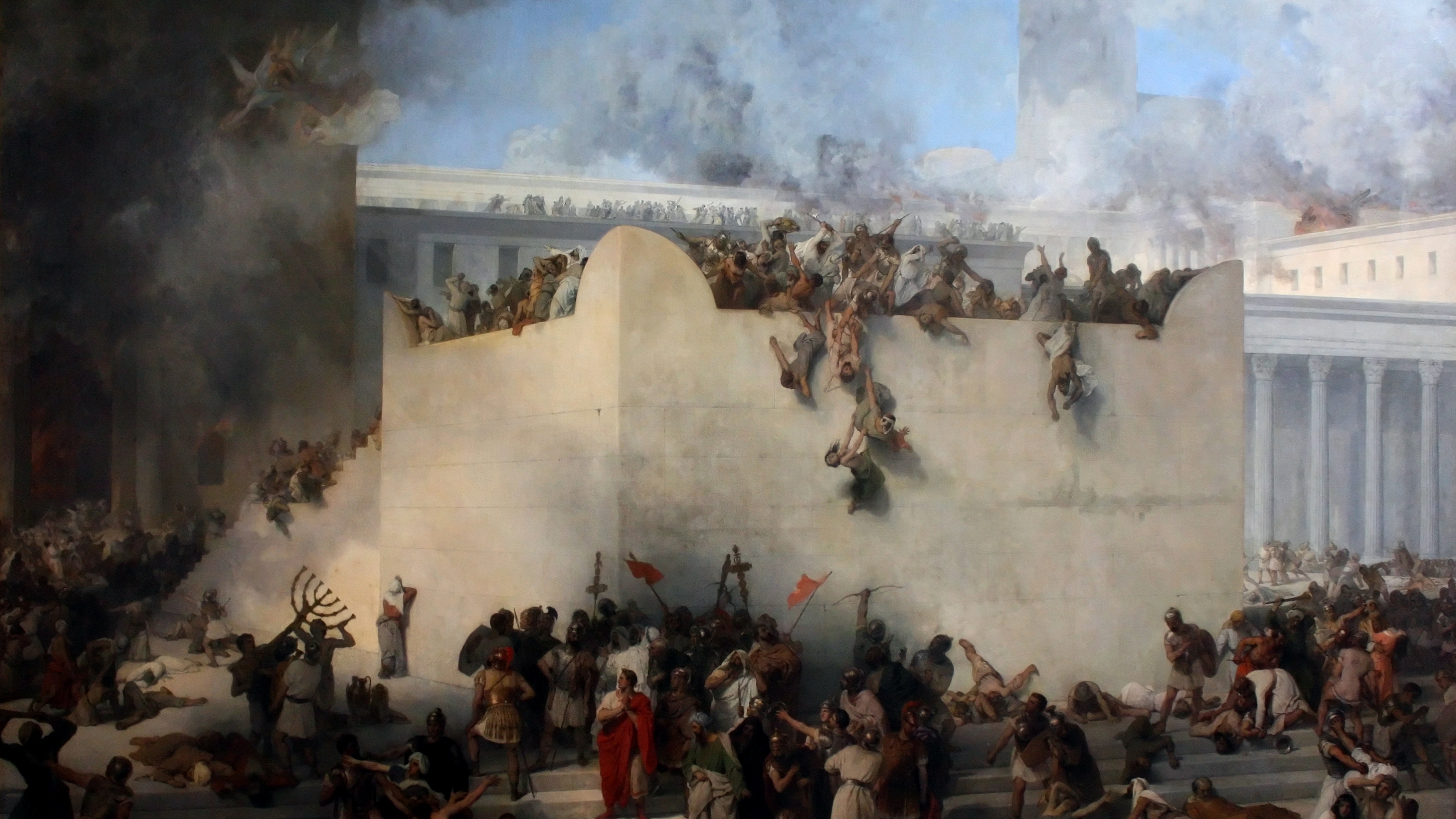 Many Jews will know the history of the First Jewish-Roman War (c.e. 66–73). In it, Roman forces destroyed towns and cities across Judea, killed and displaced thousands of Jews, and devastated Jerusalem, including the temple.

Less well-known, however, are the conditions in Judea before the war. Josephus, the first-century Jewish historian who witnessed this tragedy, wrote that the Jews “turned their hands one against another.” Divided families, towns and communities were in conflict. Civil wars broke out in towns and villages from Galilee to Jerusalem to Idumea.

What was the main source of this division? Rome. After more than 60 years of being ruled by the Romans, a strong contingent of Jews began pushing for independence, by armed rebellion if necessary. But many others, especially in Jerusalem, wanted to remain subservient. Josephus wrote that disagreement over this issue became so sharp it split apart families. “There was also a bitter contest between those that were fond of war, and those that were desirous for peace. At the first this quarrelsome temper caught hold of private families, who could not agree among themselves; after which those people that were the dearest to one another brake through all restraints with regard to each other ….” (The Wars of the Jews, 4.3.2.)

In c.e. 68 the Zealots—imposing their will on the Jerusalemites—took over the temple. They established it as the hub of their operations and proceeded to carry out holy duties. Ananus ben Ananus, leader of the Judean provisional government and former high priest of the Sadducee sect, led the inhabitants of Jerusalem in an uprising against the Zealots, successfully forcing them to hole up in the inner court of the temple. A message for help was sent from the Zealots to the Idumeans (Edomites) under the false pretense that Ananus had requested the assistance of Rome in taking control of Jerusalem. Twenty thousand furious Idumeans responded to the call, and marched on the capital.

Jerusalem’s population under Ananus—now besieged from within and without—barred the gates to the arriving Idumeans. Josephus recorded: “There broke out a prodigious storm [that] night, with the utmost violence, and very strong winds, with the largest showers of rain, with continued lightnings, terrible thunderings, and amazing concussions. … These things were a manifest indication that some destruction was coming upon men.” (The Wars of the Jews, 4.4.5.) Masked by the noise of the storm, the Zealots cut the bars of the temple, slipped out, and opened the city gates to the Idumeans. Before daybreak, 8,500 Jews were dead. A violent civil war had begun. Over the next few days, the Zealots and Idumeans, led by John of Giscala and Eleazar ben Simon, killed another 12,000 fellow Jews.

The Sadducees sought assistance from Simon bar Giora, the leader of another Jewish faction. His 10,000 militiamen began marching on Jerusalem, pillaging Idumean lands as they went and gaining more supporters. By the time he reached Jerusalem, bar Giora had an additional 40,000 cohorts and was able to easily take control of the city. But his presence did nothing to restore peace; tension and hatred festered among the warring factions of Jews.

On July 1, c.e. 69, Titus, son of the newly crowned Emperor Vespasian, received command of the Roman offensive in Judea. Titus immediately laid siege on Jerusalem. Attacking from the north, he broke through Jerusalem’s Third Wall within a month and the Second Wall shortly thereafter.

The thicker First Wall, which surrounded the temple complex and the upper and lower city, remained. Crammed within it were the trapped and still-disunited Jews.

The Jews had no central government, no unity of command, and no coordinated strategy or tactics. With deadly Roman enemies surrounding them, they still expended energy fighting among themselves—even destroying the food supplies in the city (possibly to inspire greater desperation in resistance). One of the faction leaders was murdered; the remaining two leaders finally ceased hostilities only when the Romans began erecting siege ramparts. After seven grim, disunited, deadly months of famine and violence, Jerusalem fell.

This history teaches powerful lessons for modern Israel. It shows what happens when civil disagreements are unchecked, when fractures widened, when differences grow violent.

Today the fractures in Israel and among Jewish groups are not nearly as wide as among the Jewish groups of the first century. But the cracks in Israel’s politics, culture and society are growing wider. Tension and frustration between various groups and sectors and toward the government is worsening. On some issues, the differences have become irreconcilable.

Israel’s disunity is clearly visible in its politics. The nation hasn’t had a functional government in nearly a year. In both of the last two general elections, the vote was split evenly between Benjamin Netanyahu’s Likud Party and Benny Gantz’s Blue and White Party. Neither side is willing to work with the other. Now, unless there is significant change, Israelis may be forced back to the polls for the third election in 12 months.

Corruption accusations against Netanyahu are seen as the primary cause of the current government deadlock. Citing them, Gantz has refused to work with Likud. But these criminal charges are a symptom of a bigger issue. Israel’s media and unelected state prosecutors are relentlessly attacking the democratically elected prime minister because of disagreements with his policies. Like America and Britain, Israel has a powerful radical left that is working to uproot the democratic process it claims to defend.

The dysfunction of Israel’s government is ruining people’s trust in the system. Just as their ancestors did, modern Jews are losing faith in their leadership. In January 2018, an Israel Democracy Institute poll found that 80 percent of Israelis think their politicians prioritize their own interests over those of the public, and 78 percent of Israelis don’t believe that citizens can influence government policy.

In a November 4 Haaretz opinion article, former Prime Minister Ehud Barak warned that as a result of this political and religious internal division, “Israel will enter a governmental, constitutional and political crisis that will threaten its cohesion as a democracy” (emphasis added throughout). When four fifths of a country’s citizens lose faith in their democracy, the results can only be destructive.

On November 11, President Reuven Rivlin, speaking at an event commemorating the assassination of slain Prime Minister Yitzhak Rabin, warned of the malicious hatred permeating Israel and worried that it would cause another assassination. “This is not our way; this is not the way of the people of Israel,” he warned. “We have to be cognizant of the destruction we could wreak with our own hands.”

Politics isn’t the only issue dividing Israel. Jonathan Cook, a columnist for the National wrote, “The real divide in Israeli politics is between religious and secular ultra-nationalism.”

This secular–versus–religious conflict is evident within the tale of two Israeli cities. Tel Aviv is a secular metropolis, the homosexual capital of the Mediterranean, a city filled with clubs and parties. It’s “the city that doesn’t sleep.” Drive 45 minutes southeast and you enter Jerusalem, a city filled with synagogues, cathedrals and mosques. Most of Jerusalem closes down on Shabbat. In Jerusalem, religion and morality remain important.

Can the fractures dividing Israel be healed? If so, by whom? So far, no figure, party or religion has emerged to lead the way in reconciling these worsening differences.

It wasn’t the Romans who destroyed Jerusalem in the first century. As Josephus wrote, “[S]edition destroyed the city, and the Romans destroyed the sedition.” The Jews weakened themselves by division and infighting. The lesson of the Jewish Revolt is this: Division causes destruction.

Israel today has no shortage of hostile foreign forces seeking to destroy it. Right now Israel is strong militarily. It also has a good friend in the White House, which helps enormously. But how long will this last?

Even the strongest military in the world can be rendered ineffective by political failure and internal disunity. Israel cannot afford to be divided. Yet deadly division is creeping into Israel’s politics, culture and society. If something is not done to heal the rift, history shows how badly it will end.

Roughly 2,600 years ago the Prophet Amos asked, “Can two walk together, except they be agreed?” Today we ask a similar question: Can a nation continue, except it be united?