Israel has a powerful and uncompromising ‘deep state,’ just like America and Britain.
By Warren Reinsch and Samuel Livingston • November 22, 2019 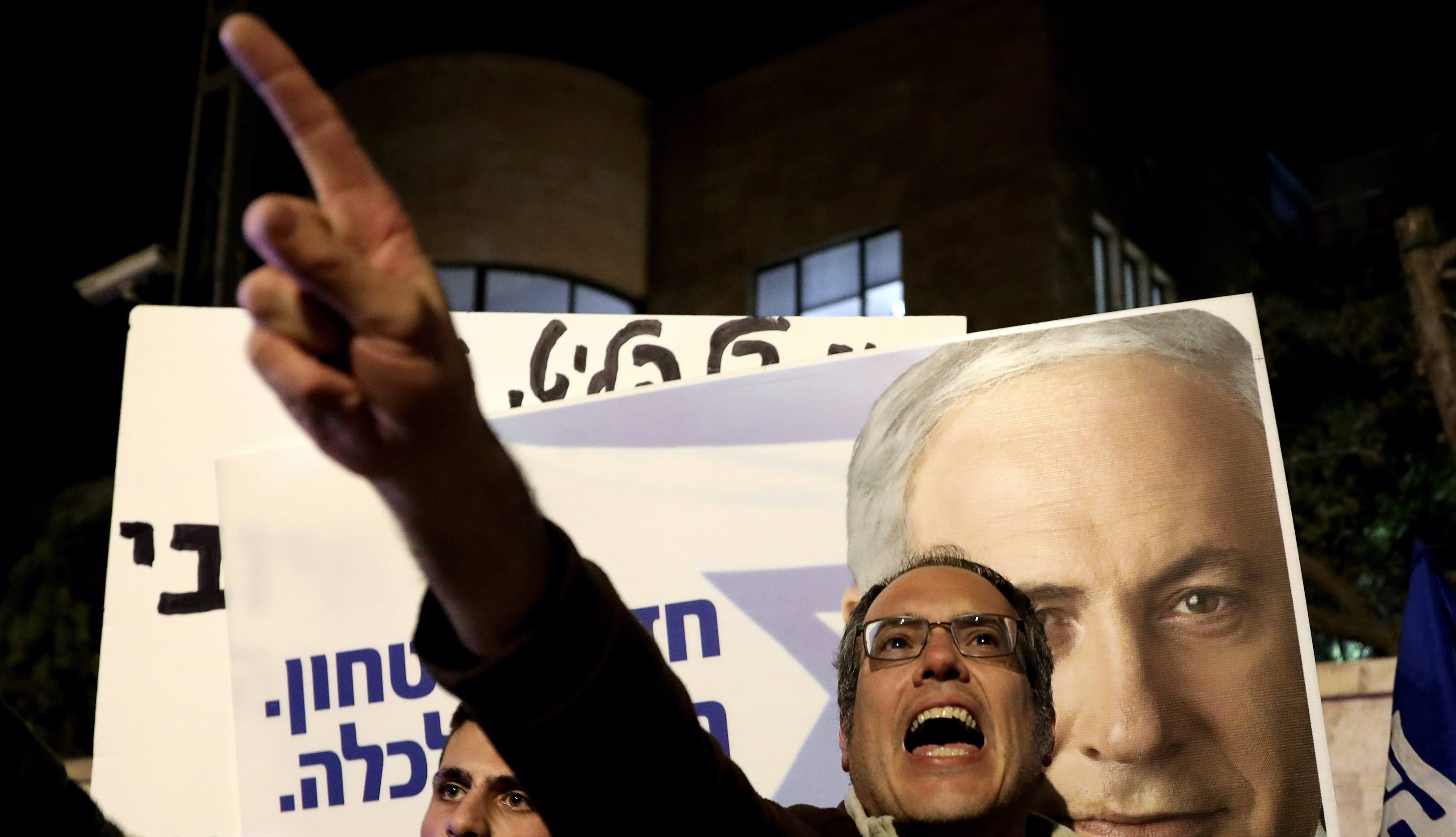 Supporters of Israeli Prime Minister Benjamin Netanyahu chant slogans as they demonstrate their solidarity with him outside his official residence in Jerusalem on November 21, 2019.
GALI TIBBON/AFP/GETTY IMAGES

As Israel heads for an unprecedented third election, Attorney General Avichai Mandelblit on Thursday announced his plans to indict Prime Minister Benjamin Netanyahu, Israel’s longest-serving prime minster, on charges of bribery, corruption and breach of trust. This is the first time in Israel’s history that it has tried to indict a sitting prime minister.

Following the announcement, Netanyahu held a press conference in which he accused the police and state prosecutors of an “attempted coup.” He said, “I deeply respect the justice system in Israel. But you have to be blind not to see that something bad is happening to police investigators and the prosecution.”

What happened in Israel this week really must be considered in the context of events in both America and Britain. In each nation, there has been an ongoing effort to undermine the democratically elected leadership by any means possible. In America, President Trump routinely comes under attack by the “deep state,” a powerful alliance of government agencies, radical-leftist politicians and bureaucrats, and the mainstream media.

Britain also has a deep state and it is working to overturn the Brexit referendum.

Israel’s “deep state” has been trying to depose Netanyahu for years. But now the fruits of its labor are showing. And it’s frightening. The parallels between the attack on Netanyahu and on United States President Trump are astounding.

Those who oppose Netanyahu are thrilled to see the attorney general indict their political rival, as are many Democrats in the United States who abhor Mr. Trump. One advisor to the Bernie Sanders campaign tweeted, “Jealous of my Israeli colleagues for having an attorney general who isn’t a totally corrupt political hack.”

Democratic presidential candidate Elizabeth Warren tweeted, “Netanyahu is accused of accepting bribes, trading government favors, and manipulating a free press. Like his pal Donald Trump, he’ll stop at nothing to enrich himself and stay in power. This blatant corruption has no place in any democracy—I’ll fight it at home and abroad.”

Democratic lawyer Alan Dershowitz issued a warning about how dangerous these attacks on Netanyahu are. “I think we’re seeing the weaponization of criminal justice for political purposes … In Israel, the attorney general is supposed to be outside of politics,” he said in a recent interview.

American radio host Mark Levin tweeted that Netanyahu should not step down. He wrote, “I’ve carefully reviewed these charges and they’re outrageous. This is an assault on freedom of the press and the investigation was corrupt. And your media is ever worse than ours.”

Just like in America, Israel’s radical left will stop at nothing, sacrificing all legal barriers, to bring down their opponent.

Amnon Lord wrote for Israel Hayom, one of the few conservative media outlets left in Israel, that, “Many in the public are disturbed by the fact that this is unwarranted, and Attorney General Avichai Mandelblit’s decision further erodes the public’s trust in the system.”

There is a sense of disdain over the fact that the indictment reeks of a pre-ordained conviction, fueled by attempts to convict Netanyahu in the court of public opinion using various leaks from the investigations, long before the case ever saw the inside of a courtroom. …

If the public felt that Netanyahu was guilty of serious and undeniable offenses, I have no doubt there would be a public demand for his resignation and he would have heeded it. But that is not the case.

So if anything, what we saw on Thursday was the culmination of long, coordinated political and judicial ploy to topple the prime minister.

Caroline Glick provided an even more powerful warning, again highlighting the parallels between America and Israel. She tweeted, “Today was a horrible day in Israeli history. A horrible day in Jewish history. And a horrible day in the history of democracies. Israel’s legal fraternity completed the rolling coup they have been enacting against Netanyahu for the past 3 years.”

In another tweet, she posted, “The AG Mandelblit told the public we mustn’t delegitimize the prosecutors behind this coup. So I don’t know what I can say. He just determined that in Israel, positive coverage for a politician is bribery if the politician is Netanyahu. Since I’m a journalist, I am worried.”

The parallels between the attack on Netanyahu and on Trump are astounding. It’s the same spirit motivating each movement! And it’s no coincidence that it’s occurring in the nations of America, Britain and Israel.

In the Trumpet Daily Radio Show earlier today, Watch Jerusalem executive editor Stephen Flurry points out the biblical significance of events happening in these three nations, and what is driving these lawless attacks plaguing each of them.