How Germany and Turkey Fuel the Syrian Crisis

Under Turkish command, German tanks are rolling through Syria.
By Josué Michels • November 25, 2019 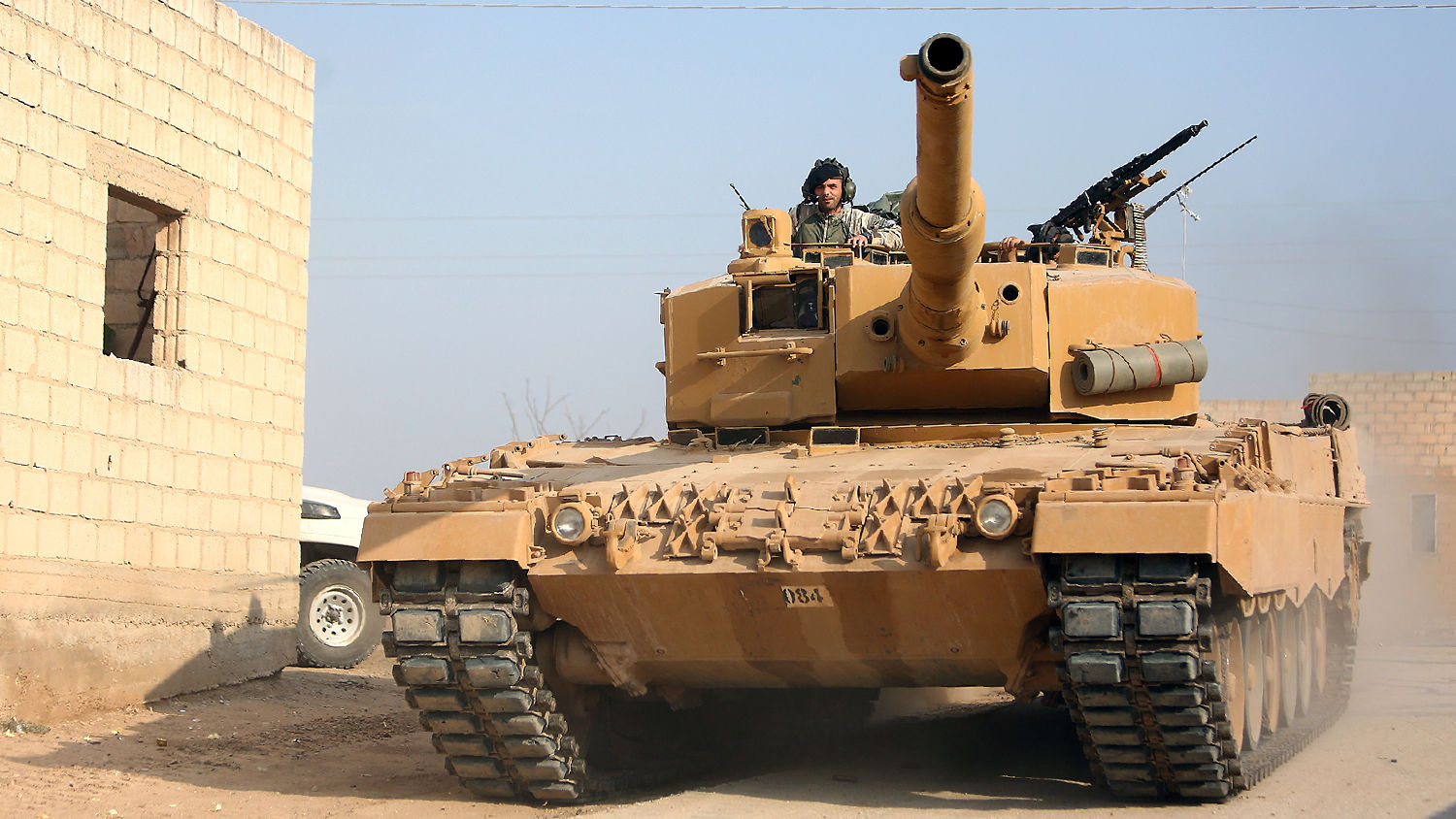 A Turkish soldier mans a tank during a raid in a village east of Ras al-Ain on the border between Syria and Turkey in northeastern Syria, on October 28.
NAZEER AL-KHATIB/AFP VIA GETTY IMAGES

Germany is among the five largest arms exporters in the world. And one of its chief customers is Turkey. Germany and Turkey pursue a common interest in Syria that few understand.

Turkey operates around 750 German-made main battle tanks. Turkey used these tanks in January in an offensive against Kurdish forces in Syria. In October, German tanks under Turkish command rolled into Syria again, causing many to ask: Why is Turkey allowed to use German tanks to kill in Syria?

The images and videos of the German tanks operating in Syria created a public outcry in Germany. Many activists and political opponents of the government are demanding another strict ban on weapons exports to Turkey. But Germany’s relationship with Turkey is complicated and based on strategic rationale rather than moral diplomacy. Turkey plays a major role in counterbalancing Iran’s growing influence in Syria, in fighting the Islamic State, and in stopping the migrant flow from Syria to Europe.

It is, therefore, unsurprising that in the last few years Turkey has continued to be one of Germany’s largest arms importers. In the first eight months of 2019, Turkey received $277 million worth of war weapons from Germany. Reports indicate that deliveries were maritime goods, likely including six submarines.

Last year, Turkey made $296 million worth of purchases, amounting to almost a third of all German war weapon exports in 2018. “Turkey was clearly the number one recipient of German armaments,” Germany’s Die Zeit noted on October 17. “This could be the case again this year despite a partial arms export stop because of the Syria offensive” (Watch Jerusalem translation throughout).

While Germany promised it would not deliver weapons that Turkey would likely use in the Syrian conflict, Germany is still keen to maintain good relations, in which arms exports play a major role. The Economic Ministry website states that “arms exports are not resources for economic policies.” Instead, they build strategic partnerships and alliances, while helping maintain Germany’s arms industry.

The German economy doesn’t depend on arms exports as many might think. The exports are also not a mere effort to appease Turkey, hoping to secure a partner in the refugee crisis. German-Turkish relations go back to World War i.

When Germany and Turkey still ruled empires, they forged an alliance. In World War i, the Ottoman Empire and the German Reich fought side-by-side against Britain, France and Russia.

Such history is not easily forgotten, and it shapes relations to this day.

After both empires suffered defeat in the war, the Ottoman Empire collapsed and the Turkish Republic formed. Turkey today has the second-largest number of military personnel in the North Atlantic Treaty Organization. Germany is an economic heavyweight, with the potential to become a military giant overnight. Through nato-required authorization, both have access to nuclear bombs. Add Turkey’s strategic location, and together, these historic allies are a force to reckon with.

Turkey and Germany share a common goal in Syria. But we can’t understand that goal by only watching the news or reading reports. Bible prophecy gives a clear picture of where this German-Turkish cooperation is leading.

As Watch Jerusalem editor in chief Gerald Flurry explained in “A Mysterious Prophecy,” Psalm 83:4-6 speak of an unprecedented alliance that is prophesied to form in our day. Germany, Turkey and Syria are mentioned in this prophecy (read Mr. Flurry’s article for a detailed explanation). As Mr. Flurry explained, this alliance will form primarily to oppose the United States, Britain and the Jewish state in the Middle East, and secondarily to oppose Iran.

We see the Psalm 83 alliance at play in the Syrian conflict. While Turkey and Iran are partners in the Middle East, they have conflicting interests in Syria. Iran supports the Syrian government; Turkey supports the rebels.

In “How the Syrian Crisis Will End,” Mr. Flurry wrote in 2014 that this conflict over Syria would bring Turkey closer to Germany, its historic partner.

Bild reported on October 21 that “there is ample evidence that Turkey has passed the heavy weapons of German production to its … partly Islamist allies of the Syrian National Army (sna), an association of numerous former rebel groups under the command of Turkey.” Thus, in a way, Germany is already helping Turkey push back against Iranian influence in Syria.

Germany is known for creating crises and then intervening in those crises. Consider World War i, the Balkans crisis, and the euro crisis as a few examples. It is no surprise, therefore, that Germany recently proposed to send troops to Syria.

Turkey’s involvement in Syria is also in direct opposition to the U.S. For years, the U.S. supported Kurdish fighters in the region, while Turkey opposed them. Only recently has the U.S. withdrawn its support in northern Syria, leaving Turkey an open door.

In the future, expect Turkey and Germany to work even closer together to pull Syria on their side, as prophesied in Psalm 83. There may be some friction between the two. But they have similar goals for the greater Middle East. In the short term, this alliance may bring some stability into the region. These developments may even cause the U.S., Britain and Israel to rejoice. But if you consider Germany and Turkey’s history, as well as their global power today, the world should be alarmed. Germany and Turkey are about to finish what they started in World War i.

The details of the Syrian crisis may be complicated. But you can see the big picture in this conflict by reading Mr. Flurry’s article “How the Syrian Crisis Will End.” Not only does it make sense out of the crisis, it also gives God’s perspective and hope in a seemingly hopeless time in mankind’s history.