Can Germany Stop a Second Islamist Revolution in Libya?

Berlin wants to lead negotiations in Libya as Iran moves in.
By Warren Reinsch • December 4, 2019 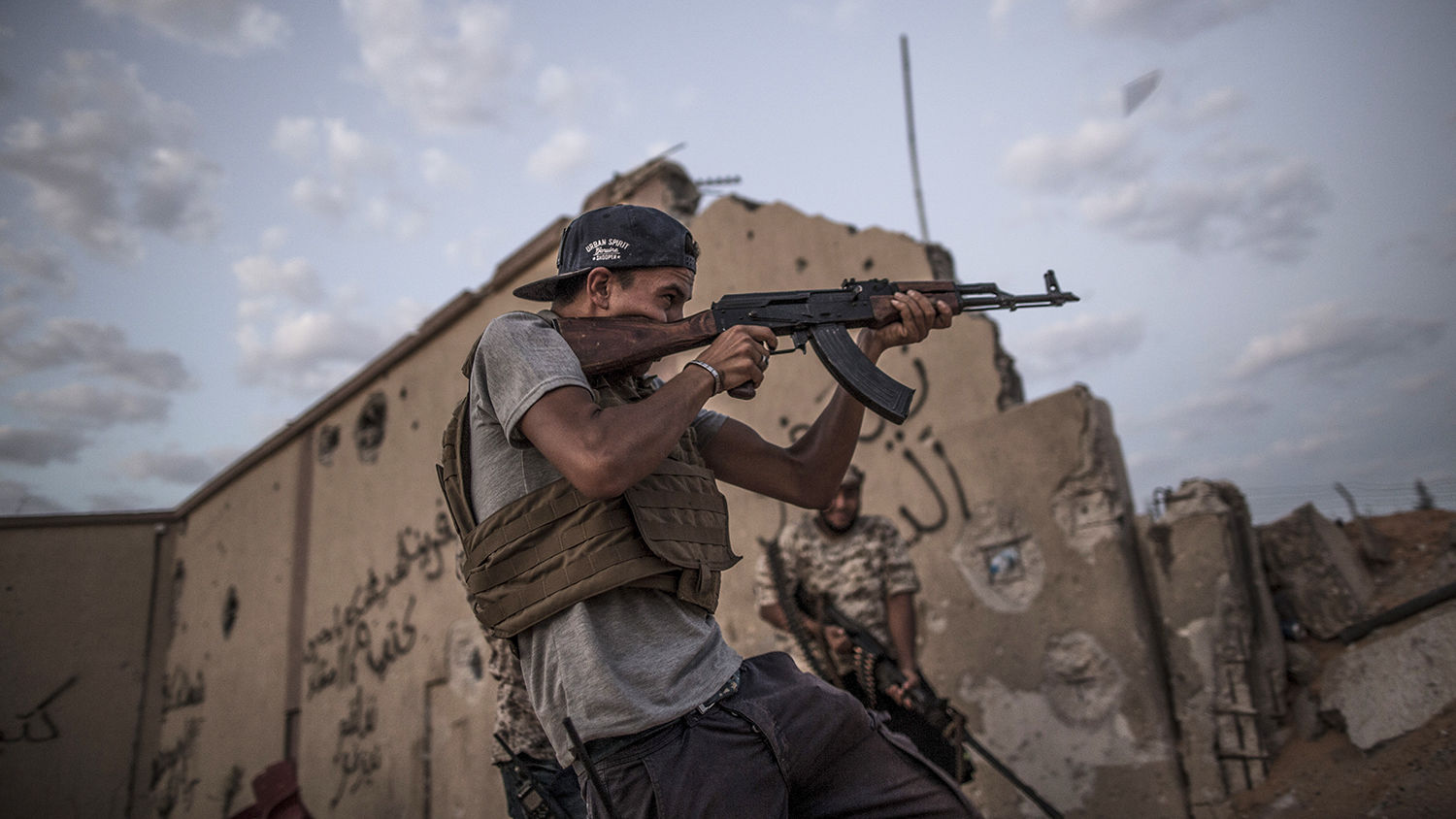 A fighter of Libya’s UN-backed Government of National Accord fires his rifle during clashes with forces of the self-styled Libyan National Army.
AMRU SALAHUDDIEN/PICTURE ALLIANCE VIA GETTY IMAGES

Former Libyan dictator Muammar Qadhafi wrote, “If the sun lost its gravity, its gases would explode and its unity would no longer exist. Accordingly, unity is the basis for survival.” Ever since he was ousted by a Western bombing campaign in 2011, Libya has been devastated by civil war. Fearing an Islamic resurgence, Germany is working behind the scenes to stabilize the Libyan theater. This intervention is leading to a clash between Europe and radical Islam.

“I can tell you that we have made good progress in this meeting and continue to work constructively to find the appropriate international framework for the Libyan process under the mediation of the United Nations,” said German Foreign Ministry spokesman Christofer Burger, according to a November 22 report by the Turkey-based Anadolu Agency. “There is consensus in many different core areas, including that there is no military solution and that we urgently need a ceasefire.”

Many Germans are divided about intervening in Libya, but Germany’s worsening migrant problem is the biggest rationale for intervention. German Chancellor Angela Merkel fears that if Germany does not intervene, Libya is at risk of becoming a second Syrian crisis.

Field Marshall Khalifa Haftar was appointed commander of the Libyan National Army (lna) on March 2, 2015, for the purpose of removing the Islamic State from power and reclaiming control of the nation.

Four and a half years later, his forces have conquered a majority of the nation and the Islamic State has been torn away from its coastal territory in Sirte. However, his conquest did not stop there. Rejecting the UN-mandated Government of National Accord (gna), the lna began launching air strikes and artillery shells against Tripoli in April. Haftar’s offensive is still facing a military stalemate with gna forces defending the capital city.

Since the offensive began, the civil war quickly devolved into an international proxy war. While the gna is supported by Italy, Qatar and Turkey, the lna is supported by Egypt, France, Russia, Saudi Arabia and the United Arab Emirates. The two European Union members, France and Italy, have postured against one another in this conflict. Italy, being overrun by Libyan refugees, supports the gna’s anti-migration policy, while France backs the lna’s anti-Islamic State policy.

The European Council on Foreign Relations reported on November 20 that, as a result, “The German government is widely seen as the perfect arbiter in the conflict, given its neutrality, its good relationships with all involved.” Due to battlefield losses in the summer, Haftar’s offensive looked “shakier than ever,” the report continued. This is why the UN asked for “Germany’s assistance in mediating discussions on ending the war. It is remarkable that the usually reluctant Merkel agreed to take on the initiative.”

Merkel realizes the threat instability poses to Europe’s soft underbelly. War-torn Libya has become a target for terrorists and a safe haven for a resurgent Islamic State. On November 24, the Washington Post reported “that the Islamic State branch remains capable of taking advantage of the current power vacuum.”

A March 2019 report by the Combating Terrorism Center at West Point states, “Libya’s political problems cannot be fixed solely by securing a détente among coastal actors.”

Though the Islamic State in Libya has lost its territorial holdings along the coast, it has since reorganized and spread throughout Libya’s desert interior.

The report continued: “The Islamic State in Libya’s ‘southern strategy’ provides it not only with a base to plot attacks, train operatives, and gain resources, but its attacks on local security forces in the desert, primarily the lna, allows it to simultaneously disrupt attempts of coastal actors to foster governance in the south.”

Hiding out in the Libyan desert, the Islamists have adopted a strategy of guerrilla warfare. These hit-and-run attacks are very low-cost and nearly impossible to predict where the next attack will occur, making them a logistical nightmare to counteract. This has also been coupled with the recruitment of “sleeper cells,” or terrorists who go about their daily activities as a citizen until activated to strike. The use of sleeper cells allows the Islamic State to still conduct attacks in the northern coast, despite its territorial loss. These occasional, but large attacks against the gna are the Islamic State’s attempt to disrupt negotiations and to ensure Libya remains a volatile state.

The counterterrorism report continued: “Ultimately, the Islamic State’s presence in Libya is a symptom of the country’s instability; the root cause is state implosion.” Ever since Libya’s strongman was ousted from power, the nation has been in a constant state of conflict, which has also affected the region.

According to the Libya Herald, in 2016, Libya’s attorney general said the majority of the Islamic State’s foreign fighters were from Tunisia, Egypt and Sudan, with notable representation from the Sahel region to the south. Libya’s practically nonexistent southern border makes it very easy for jihadists—as well as Iranian officers—to sneak into the country.

On June 5, Mossad agents killed two Iranians after they crossed the border from Tunisia into Libya. According to Al-Arabiya, the two Iranians were military advisers sent by the Iranian regime to coordinate Iranian assistance with and to train the Libyan militias.

Ynetnews stated, “As part of its mission to obtain uranium from Libya’s mines, Iran is attempting to influence local militias by supporting them in exchange for uranium.” In December 2011, Nuclear Threat Initiative reported:

Even if Libya isn’t mining uranium, Iran could have gained access to the stockpiles of uranium from the Qadhafi era.

On Sept. 22, 2011, the International Atomic Energy Agency said that it had confirmed that there were two large warehouses, at least one of which was filled with about a thousand barrels of yellowcake uranium. The facility is located near Sabha, a city in southern Libya. Over the last eight years, the region has become a haven of Islamic State terrorists. Accurate data about the state of this uranium has been hard to come by since the civil war began in 2011.

While Iran may be there for uranium, its primary objective in Libya is to control the Mediterranean Sea. But Europe cannot afford to let that happen, so it is getting involved in Libyan affairs. This struggle for control of the Mediterranean is accelerating at an alarming rate, eventually leading to a clash between Europe and radical Islam.

Daniel 11:40 says that “at the time of the end,” just before the coming of the Messiah, “the king of the south,” a radical Islamist group of nations, led by Iran, will “push” at a German-led European Union. Verses 42-43 mention the nations of Libya and Ethiopia, showing that Iran will push at Europe primarily through its control of the Red and Mediterranean seas.

In “Mediterranean Battle Escalating to World War iii!” Watch Jerusalem editor in chief Gerald Flurry wrote: “These two countries [Libya and Ethiopia] border the two seas that comprise the most important trade route in the world.”

Europe relies heavily on trade flowing through this waterway, and Iran knows it. Germany also realizes North Africa is Europe’s soft underbelly and that it needs to get involved in Libya or risk defeat. When Iran finally pushes Europe past the breaking point, there will be a colossal clash of civilizations in North Africa and the Middle East.

Mr. Flurry continued: “Using a little imagination, they [Europe] realize that Iran could gain control of these unstable nations [Libya, Egypt and Ethiopia]. If that happened, it would be a real problem for Europe, because Iran could block European trade through the Suez Canal at will!”

As a result, this German-led superpower will be forced to storm against radical Islam in a mighty military whirlwind! Europe may not have a unified policy in Libya, but it is heavily involved. Iran too is moving into this area. A clash is building in Libya between Europe and Iran. For more information, please read “Mediterranean Battle Escalating to World War iii!” by Mr. Flurry.