‘Every Great Man’s House Burnt He With Fire’

Archaeological proof of the Babylonian destruction of Jerusalem
By Warren Reinsch • December 25, 2019 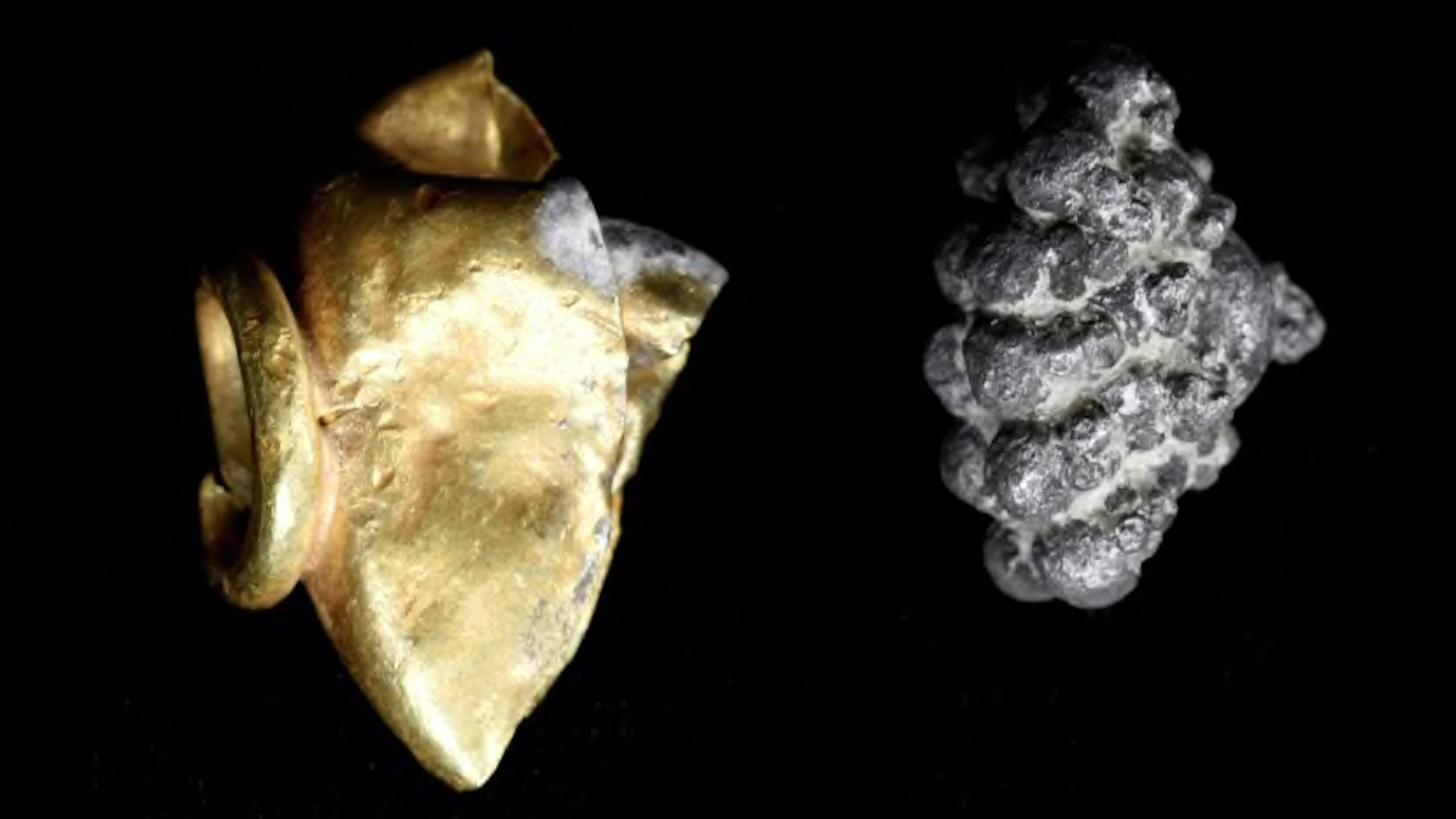 Gold and silver earring or tassel jewelry made of gold and silver from the Babylonian destruction layer of 586 b.c.e. found on the Western Hill of ancient Jerusalem
Mt Zion Archaeological Expedition/Virginia Withers

The University of North Carolina at Charlotte, in conjunction with Ashkelon Academic College and Haifa University, has been excavating the Western Hill of ancient Jerusalem for more than a decade. Earlier this year, researchers from the university announced what is perhaps the excavation’s most prominent discovery yet.

“I like to think that we are excavating inside one of the ‘great man’s houses’ mentioned in the second book of Kings 25:9,” co-director and Charlotte professor of history Shimon Gibson speculated. “We have high expectations of finding much more of the Iron Age city in future seasons of work.”

Just what were these “great man’s houses”—and did Gibson’s team really find one?

2 Kings 25:9 says, “And he [Nebuchadnezzar’s captain of the guard, Nebuzaradan] burnt the house of the Lord, and the king’s house; and all the houses of Jerusalem, even every great man’s house, burnt he with fire.”

Before the archaeologists found the Iron Age structure, they dug through a large burn layer filled with a mix of several unique finds. “It’s the kind of jumble that you would expect to find in a ruined household following a raid or battle,” Gibson said. “Household objects, [oil] lamps, broken bits from pottery which had been overturned and shattered … and arrowheads and a piece of jewelry which might have been lost and buried in the destruction.”

Archaeologists found what they believe to be a tassel or earring no more than an inch in diameter with a bell-shaped gold upper part, now somewhat squashed, and a silver cluster of grapes underneath. Biblically, grape clusters were symbolic of prosperity, wealth and abundance. Gibson wrote in Newsweek, “[O]ne thing is certain: It did belong to a member of the rich Judahite elite of the city—and that prior to the conquest of the city there must have been a house at the location we are digging.”

This discovery “is a clear indication of the wealth of the inhabitants” and this city of Jerusalem as a whole. 2 Chronicles 32:27 says that King Hezekiah and Jerusalem was blessed with “exceeding much riches and … treasuries for silver, and for gold, and for precious stones ….”

ifl Science wrote, “The earring is only the second piece of jewelry found from this era in all the digging conducted in and around Jerusalem.” Jewelry is a very rare find in archaeology because it would usually be looted in battle.

Also of note was the discovery of several bronze arrowheads.

Gibson explained, “The arrowheads are known as ‘Scythian arrowheads’ and have been found at other archaeological conflict sites from the seventh and sixth centuries b.c.e. They are known at sites outside of Israel as well. They were fairly commonplace in this period and are known to be used by the Babylonian warriors. Together, this evidence points to the historical conquest of the city by Babylon ….”

Several of these well-made “Scythian” bronze arrowheads were discovered in Dr. Eilat Mazar’s 2007–2008 excavations in the City of David. In Chapter 11 of The Summit of the City of David Excavations 2005–2008, Dr. Mazar and Watch Jerusalem contributor Victor Vejil writes, “Excavations all over the country show that the Irano-Scythian arrowhead was a unique type of late Iron Age IIb arrowhead [just before the Babylonian conquest] that became more popular … by both the Babylonian and Persian armies.” The report continues to note that in 1984, archaeologist Yigal Shiloh found scores of these arrowheads in the “burned layer of Stratum 10, dated to the Babylonian conquest of Jerusalem in 586 b.c.e.” Several of these arrowheads were also found in relation to Babylonian conquest at En-Gedi, Tel Batash and Lachish.

The Bible says that during the conquest, the Babylonians burned all the houses of Jerusalem, including the “great man’s houses.” Does this Iron Age structure fit the context—particularly considering it is located on the opposite, Western Hill to the City of David?

The original city of Jerusalem under the united monarchy of kings David and Solomon was located on the Eastern Hill (known as the City of David, Ophel or Mount Moriah). By the time of King Hezekiah, the city had expanded west across the Tyropoeon Valley onto the Western Hill (part of this expanded city fortification, known as the “broad wall,” has been discovered and dated to Hezekiah’s reign). Today, this Tyropoeon Valley no longer exists as a result of continued landfill throughout history. By the time of the Babylonian conquest, the western expansion was encompassed within the city wall.

“We know where the ancient fortification line ran,” noted Gibson, “so we know we are within the city. We know that this is not some dumping area, but the southwestern neighborhood of the Iron Age city—during the eighth century b.c.e. the urban area extended from the ‘City of David’ area to the southeast and as far as the Western Hill where we are digging.”

The phrase translated “great man’s house” in 2 Kings 25:9 is bayit gadowl, which could also mean “large house.” These ancient mansions would have been for the wealthy or government officials. The discovery of the piece of jewelry supports the idea that this was one of the wealthier residences of the city. Additionally, from an owner’s point of view, the higher elevation, possibly less-cramped location and newer part of the city would all have been benefits. It also proves that Jerusalem was a sprawling city and not some hilltop village. “This spot would have been at an ideal location, situated as it is close to the western summit of the city with a good view overlooking Solomon’s temple and Mount Moriah to the northeast,” wrote Gibson.

Perhaps the resulting discovery will yield another typical four-roomed Israelite house, or perhaps it will be something much larger. Until then, we await the next significant discovery.