U.S. Strikes Back Against Iranian Aggression in Syria and Iraq

And the rising power of the Iran-backed militias
By Warren Reinsch • December 30, 2019 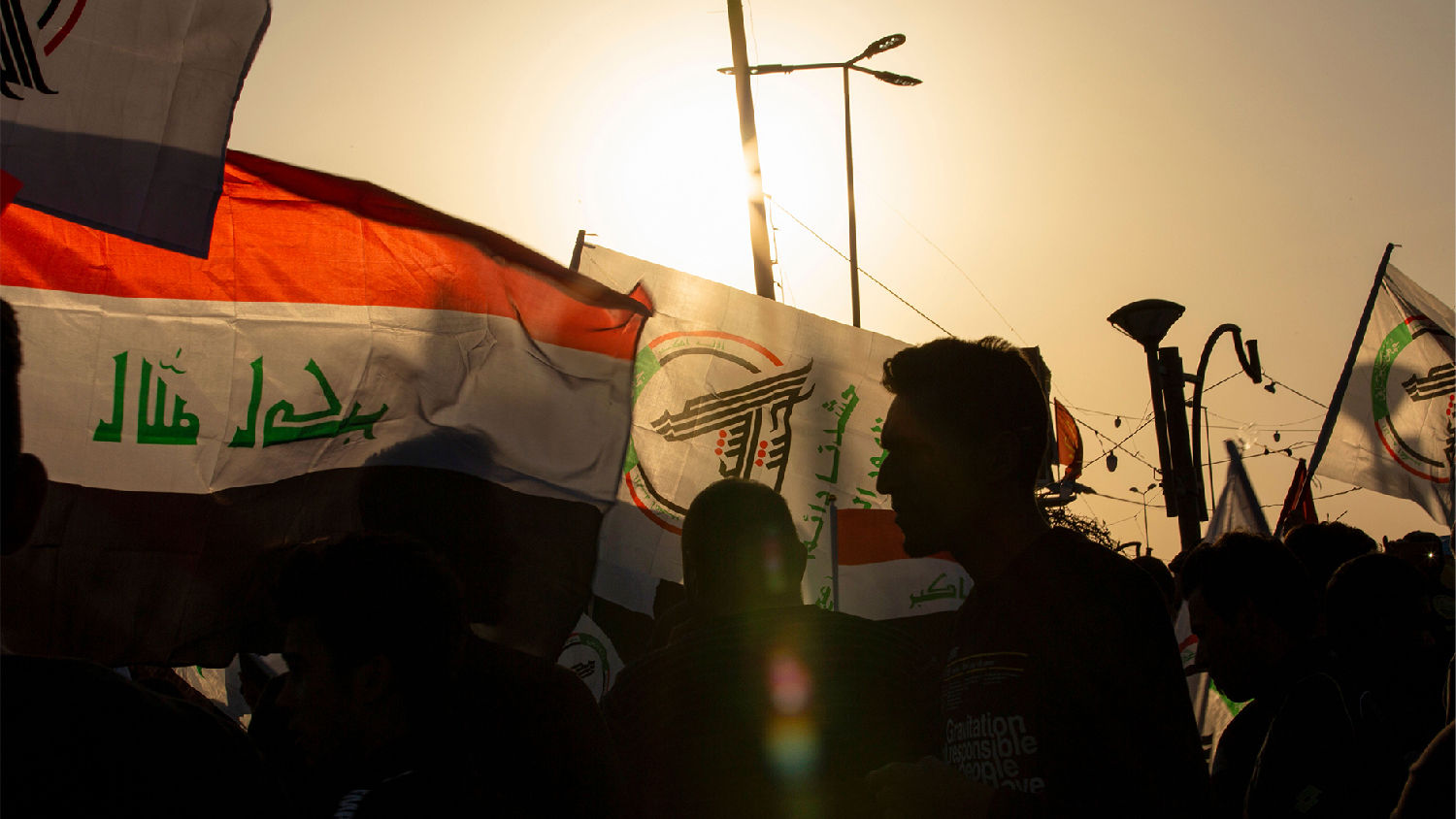 Iraqis wave thew national flag and the Hashed Al-shaabi armed network flags in the southern city of Basra on December 30, 2019, during a demonstration to denounce the previous night’s attacks by US planes on several bases belonging to the Hezbollah brigades near Al-Qaim, an Iraqi district bordering Syria.
HUSSEIN FALEH/AFP VIA GETTY IMAGES

Most recently, according to U.S. officials, Kataib Hezbollah launched 30 rockets at the K-1 military base in northern Iraq on Friday. Four American troops and two members of the Iraqi Security Forces were injured and an American contractor was killed in the attack, prompting the U.S. retaliation.

The Pentagon said on Sunday that the U.S. air strikes targeted three locations in Iraq and two in Syria. The targeted facilities included weapons storage warehouses and command posts, which the Iran-backed militia group used to plan and execute attacks on U.S. forces. According to Reuters, Iraqi security and militia sources reported that at least 25 militia fighters were killed and at least 55 were wounded in the U.S. air strikes.

U.S. Sen. Tom Cotton called the air strikes “a justified response to the killing of an American and the wounding of several American service members and Iraqis.” He further warned, “Tehran must stop attacking Americans or else face even graver consequences.”

The long-awaited reprisal comes as a relief to many Israelis. For the past year, Israel has conducted hundreds of covert air strikes on the Iran-backed militias in Syria, and more recently began striking targets in Iraq.

While these attacks were officially unclaimed by the Israeli government, Israel began evolving its security doctrine. Attacks that would have been covered up suddenly began to be announced publicly, including via social media.

This new security doctrine was first used in Syria, but now, for the first time, it is beginning to be used in Iraq. On December 25, commander in chief of the Israel Defense Forces, Lt. Gen. Aviv Kochavi, said: “We will not allow Iran to entrench itself in Syria, or in Iraq. … Advanced weapons [ballistic missiles] are being smuggled by the Quds Force in Iraq on a monthly basis and we can’t allow that.”

Iran and its Iraqi militias share the goal of driving U.S. forces out of the Middle East. Through several rocket attacks by the Iraqi militias, Iran is working to push the U.S. out of Iraq in order to complete its conquest of the nation.

Following a previous rocket attack this month, U.S. Secretary of State Mike Pompeo warned on December 13 that “the U.S. will respond decisively if Iran or its proxies harm U.S. personnel or our Iraqi partners.”

This is the moment US airstrikes targeted Iranian-backed militia in Iraq.

US officials say the move was in response to rocket attacks on a military base in the northern Iraqi city of Kirkuk - more here: https://t.co/R1WwW03DEo pic.twitter.com/o1lNZ708lV

The U.S. has proved that it is willing to attack Iran’s proxies, however, it has not directly attacked Iran. U.S. President Donald Trump even pulled the plug on a military response in June after Iran shot down a U.S. surveillance drone and sabotaged several oil tankers in the Persian Gulf.

Neither Iran nor the U.S. wants a full-scale military conflict. The United States would face severe international and internal backlash and Iran would likely be steamrolled by America’s superior military technology.

Instead, Iran conducts asymmetric warfare. It instigates several small attacks, usually with its proxies. This type of warfare has allowed it to continually grow in power throughout the region, while the U.S. endures attack after attack and rarely retaliates, and if it does, the proxy group is attacked instead. As a result, one terrorist group follows after another. Meanwhile, the U.S. spends billions of dollars dealing with the effects instead of going after the cause.

Sunday’s air strikes have many questioning “whether the American counterattack tamps down the cycle of violence or escalates it,” as the New York Times put it.

Bible prophecy says it will escalate. But the U.S. will not be involved.

The Bible prophesies of a coming military escalation, a third world war. Daniel 11:40 says this clash will occur between a group of radical Islamic nations, led by Iran, and a German-led European Union.

Watch Jerusalem editor in chief Gerald Flurry proves that the biblical “king of the south” mentioned in Daniel 11:40 is led by Iran. In The King of the South, he explains:

Iran is the most powerful Islamic country in the Middle East. Can you imagine the power it would have if it gained control of Iraq, which was at one time the third-leading exporter of oil in the world? I predicted as far back as 1992 that this could happen.

In 1992, Mr. Flurry stated that he believed Iran would be the king of radical Islam. Then a December 1994 headline by Mr. Flurry asked, “Is Iraq About to Fall to Iran?” That headline was repeated in 2003 when the U.S. ousted Iraq’s Saddam Hussein from power. Today, we see Iran’s conquest of Iraq has become a reality.

Ongoing protests throughout the region in Lebanon, Iraq and Iran emphasize just how much power Iran is accumulating.

Economically, Iran has leased the Syrian port of Latakia, it funds large portions of reconstruction throughout Syria via companies affiliated with the Islamic Revolutionary Guard Corps, and it has access to much of Iraq’s oil and its large market.

Militarily, Iran has a large base at the Iraq-Syria al-Qaim border crossing, it has infiltrated the Iraqi military, thereby gaining access to U.S. military equipment via the Popular Mobilization Units, and it has conducted several attacks on oil infrastructure in the region, such as the September 14 attack on Saudi Arabia’s Abaqiq oil processing facility, the world’s largest of its kind.

Politically, Iran controls several ministries in Lebanon’s government via its Lebanese proxy Hezbollah, it is closely allied with Syrian President Bashar Assad, and it has obtained a majority in the Iraqi Parliament via the Fatah Alliance coalition, made up of several militias from the Popular Mobilization Units.

The Popular Mobilization Units (an Iraqi, state-sponsored, majority-Shiite, umbrella organization composed of about 40 militia groups) has been the key to Iran’s infiltration of Iraq. In The King of the South, Mr. Flurry writes:

Kataib Hezbollah, the militia targeted by the U.S. air strikes on Sunday, is part of the Popular Mobilization Units. The Units’ original purpose was to combat the emergence of the Islamic State. A majority of these militias were either created, trained or funded by Iran. Because of this history, these militias retain their loyalty to Iran over their own government—in their view, without Iran’s support, Iraq would have been conquered by the Islamic State.

According to its website, Kataib Hezbollah’s overarching goal is to establish an Islamic government, with Iran as the model. The militia looks to Iranian Supreme Leader Ayatollah Sayyid Ali Khamenei as its spiritual guide. Kataib Hezbollah is also a U.S.-designated foreign terrorist organization.

Meanwhile, Kataib’s leader, Abu Mahdi al-Muhandis, is a key figure of the Fatah Alliance in the Iraqi Parliament, actively working to oust U.S. forces from Iraqi soil. Muhandis has close ties to Iran and is Quds Force Cmdr. Qassem Suleimani’s lieutenant. As the head of the Popular Mobilization Units, Muhandis also holds an official position in the Iraqi government.

“In this context the rising attacks on U.S. forces and harassing fire against bases where the U.S. forces are located is a message by the militias and Iran of Tehran’s strength in Iraq,” Frantzman wrote.

Iran is a rising power. As the U.S. withdraws from the region, Iran is filling the vacuum. It has become the dominant power in the region—the king of the south. Watch Iran’s power continue to grow as it pushes forward a new candidate for the prime minister’s office.

For more information, read “Iraq Is Conquered—On to Jerusalem” from the earlier this year and request The King of the South.