Economic resurgence of the Jewish state in the past, present and future
By Warren Reinsch • January 8, 2020 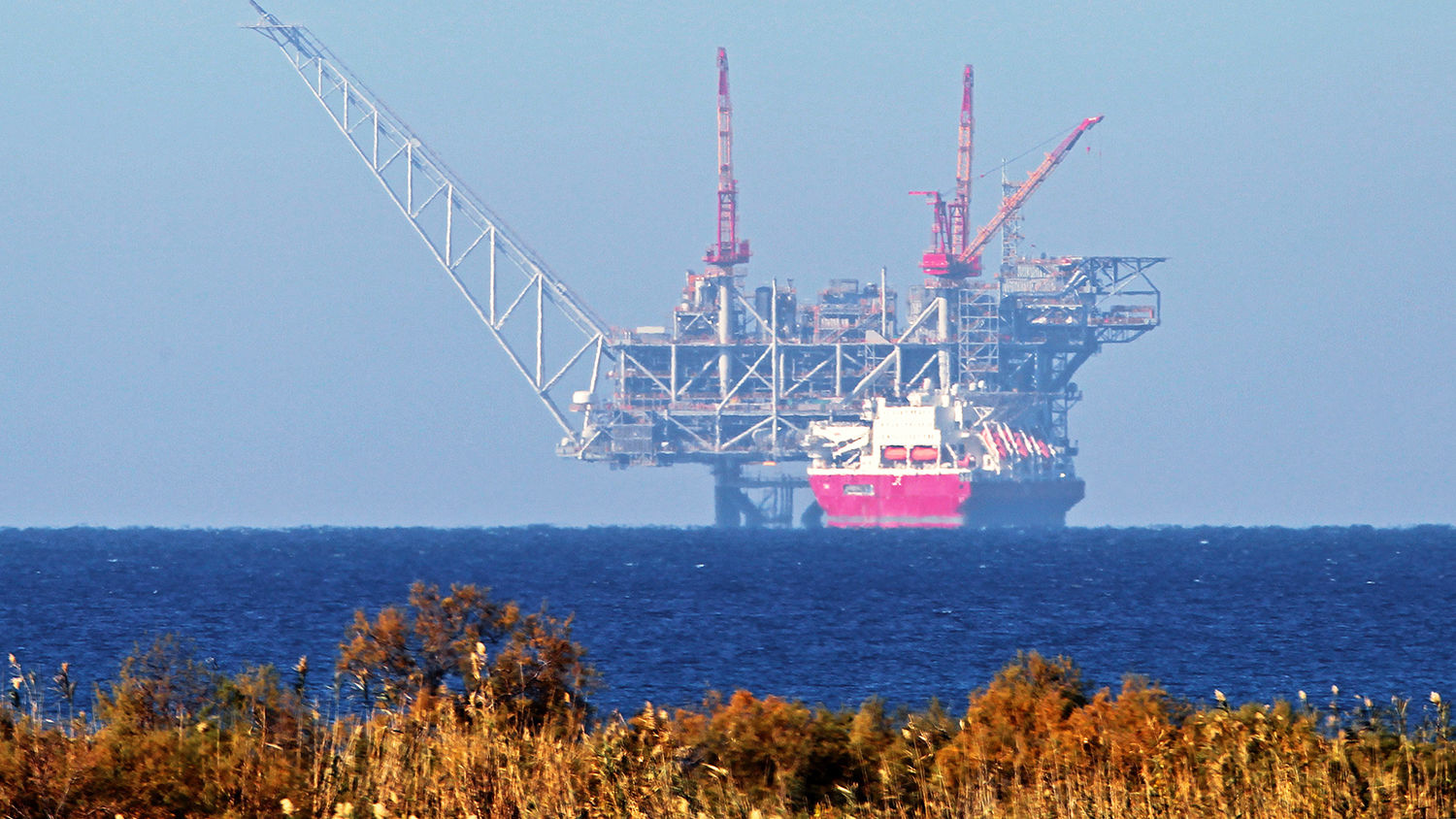 A view of the platform of the Leviathan natural gas field in the Mediterranean Sea is pictured from the Israeli northern coastal city of Caesarea on December 19, 2019.
JACK GUEZ / AFP) (PHOTO BY JACK GUEZ/AFP VIA GETTY IMAGES

Israel signed a deal with Cyprus and Greece on January 2 to build an undersea natural gas pipeline from Israel to continental Europe. When completed, it will be the longest underwater pipeline in the world.

The 1,900-kilometer-long EastMed pipeline will run from Israel’s Levantine Basin offshore gas reserves to Cyprus, through the island of Crete, and then to the Greek mainland, bypassing Turkey. From there, the pipeline will continue overland to northwestern Greece. Another undersea pipeline is planned to carry the gas from Greece to Italy.

As a result of these difficulties, Israeli Energy Minister Yuval Steinitz expects the EastMed pipeline to take up to seven years to build. However, he also said that the pipeline would be less vulnerable to sabotage because it is underwater and it does not cross many national borders before reaching markets.

Before leaving for Athens, Israeli Prime Minister Benjamin Netanyahu said that Israel is set to become a “powerhouse in terms of energy” with its offshore gas reserves. He added that the three countries have established “an alliance of great importance” that will bolster regional stability.

The new pipeline is expected to be able to carry between 9 and 12 billion cubic meters of gas a year, satisfying about 10 percent of the “energy hungry” European Union’s gas needs.

After the deal was signed, Netanyahu was quoted by Israel’s Kan public broadcaster, saying, “This a big day for Israel, which is becoming an energy power. We signed supply agreements with many neighbors; this strengthens the [Israeli] economy.”

This incredible signing comes just two weeks after Israel signed a deal to begin exporting natural gas from its lucrative Leviathan fields to Egypt. Steinitz called the deal a “historical landmark” for Israel. According to Ynet News, Steinitz said, “The natural gas revolution turns us into an energy power,” and this deal will provide “huge income for the country.”

Israel’s economy is booming, and these two natural gas exporting deals will bring more revenue and more economic growth to the Jewish state.

“The significance of this project is that we are turning Israel into a major energy power,” stated Netanyahu in a cabinet meeting on Sunday. “Last week, already, we started to export gas from the Leviathan field to Jordan; later on, we will also export gas to Egypt. This project will put billions of shekels per annum into state coffers. This money will be directed to investments in health, social services, education, infrastructure and things that will serve every citizen of the State of Israel.”

Israel has historically been dependent on imports, but this is slowly changing. Netanyahu continued: “The goal of converting our energy from coal to gas will change the status of Israel. For all the years of its existence, Israel imported energy, and this has been overturned. … This will greatly strengthen the Israeli economy.”

Netanyahu went on to describe the current state of Israel’s economy. In the field of tourism, the Jewish state has seen a 70 percent increase over the past five years, reaching an all-time high of 4.5 million tourists last year.

In the field of cybersecurity, Israel is second only to the United States. The 2019 CyberTech Conference in Tel Aviv announced that Israel received 20 percent of the overall cyberinvestments worldwide. Over the course of 2018, cybersecurity investments in Israel surged by a record-breaking 47 percent.

According to data from the Central Intelligence Agency’s 2019 World Factbook, between 2004 and 2013, Israel’s gross domestic product growth averaged a significant 5 percent per year. Then between 2014 and 2017, Israel’s gdp growth stabilized around an average of 2.8 percent per year, a very positive growth rate.

Israel’s economic resurgence comes as the United States economy is also experiencing growth. Since President Donald Trump was inaugurated in January 2017, the U.S economy has seen significant growth. According to the 2019 third quarter report from Factcheck.org, since Mr. Trump’s inauguration, the U.S. economy has had a growth rate of 2 percent, a 25 percent increase in job openings (6 million more jobs), and a 3.5 percent decline in the unemployment rate.

The United States and Israel are living in a time of prosperity and national security.

This shared economic boom in the two nations parallels an ancient time of economic resurgence in the kingdoms of Israel and Judah, under King Jeroboam ii and King Uzziah, respectively.

In “A Prophesied Resurgence in Israel,” Watch Jerusalem managing editor Brad Macdonald drew comparisons between Jewish life in the eighth century b.c. under King Uzziah of Judah and the modern State of Israel’s economic prosperity today under Netanyahu. He wrote:

Judah’s resurgence is recorded in 2 Chronicles 26 and 2 Kings 15. The Chronicles account meticulously describes King Uzziah’s military victories, his power and fame, and Judah’s impressive “economic, military and cultural renaissance” (esvBible Atlas). Under Uzziah, Judah attained wealth and glory not seen since the days of King Solomon. …

So the Bible relates two crucial details about the resurgences in Israel and Judah. First, they occurred at exactly the same time. Second, though Jeroboam ii and Uzziah were extraordinary leaders, the ultimate source of their success was God. He sponsored the revitalization in both Israel and Judah.

2 Chronicles 26:5 says that “as long as [Uzziah] sought the Lord, God made him to prosper.” This resurgence was not because of Uzziah’s own might or prowess; it was given by God.

At the same time, the northern kingdom of Israel was also experiencing a resurgence. 2 Kings 14:25 says that Jeroboam ii, one of the last kings of Israel, “restored the coast of Israel” ushering in a time of military dominance, political peace and economic prosperity. Verse 27 says that God “saved [Israel] by the hand of Jeroboam the son of Joash.”

Jeroboam ii reigned in Israel for 41 years—the longest reign of any king in the northern kingdom of Israel. God used this king to save Israel temporarily from the coming captivity. Notice what Watch Jerusalem editor in chief Gerald Flurry wrote in the May-June 2018 issue of our sister publication, the Trumpet:

King Jeroboam ii was not a righteous man—he did evil, and committed the same sins against God and the throne of David that the first Jeroboam had. Nevertheless, the Bible records something remarkable: God actually used this unrighteous king to help the nation! …

And that resurgence was temporary. Not long after, Israel was conquered and its people dispersed in captivity to the Assyrians.

In The United States and Britain in Prophecy, Herbert W. Armstrong explained that Britain and the United States are the modern descendants of ancient Israel, specifically the tribes of Ephraim and Manasseh, while the modern Jewish state is primarily descended from the tribe of Judah. Just as the northern kingdom of Israel and the southern kingdom of Judah experienced a temporary resurgence, their modern descendants are also experiencing a temporary resurgence.

Mr. Armstrong frequently said that one third of the Bible is prophecy, and 90 percent of that prophecy is for the end time just before the coming of the Messiah. More than just history, this ancient resurgence is also prophecy for us today. In Isaiah’s End-Time Vision, Mr. Flurry writes, “Although many prophecies have been fulfilled in the past, most of them were only a small type of the greater end-time fulfillment.”

What we are seeing right now in Israel’s rise as an “energy superpower” through the signing of the EastMed natural gas pipeline is proof of this fulfilled prophecy.

However, this national resurgence is only temporary.

To learn more, please read “Saving America From the Radical Left—Temporarily,” by Gerald Flurry, and “A Prophesied Resurgence in Israel,” by Brad Macdonald.