Adding to the growing fund of archaeological evidence proving the existence of the Ammonite state
By Warren Reinsch • January 18, 2020 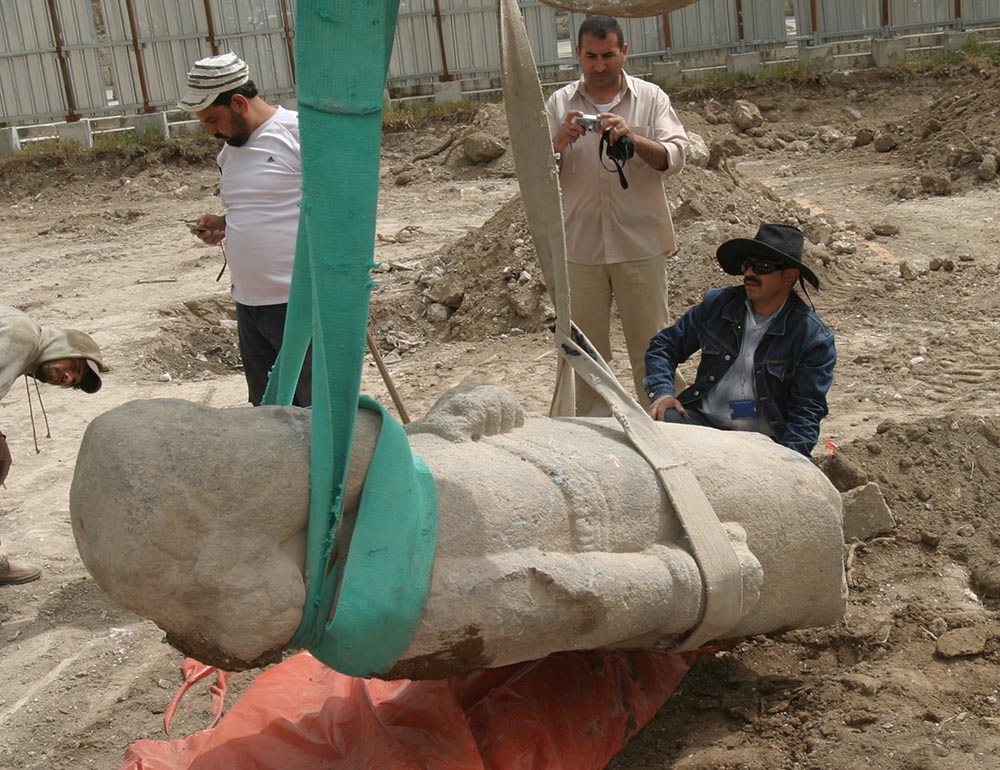 The Hebrew Bible speaks at length about an early Ammonite civilization. However, until the discovery of the Amman Citadel Inscription in 1961, many believed the Ammonites were just a fantastical creation. However, more evidence is slowly being unearthed. The recent discovery of a larger-than-life-size statue, most likely dating to the eighth to seventh centuries b.c.e., provides further proof of the existence of the biblical Ammonite state.

During renovations to the Roman theater at the Amman Citadel in 2010, a large stone object appeared, jutting out from the dust of the ancient Roman fill. (Jordan’s capital, Amman, is itself a link to the Ammonite civilization.) Prof. Joel S. Burnett from Baylor University in Waco, Texas, and antiquities expert Romel Gharib from the Department of Antiquities of Jordan quickly conducted a rescue operation to salvage the large artifact.

Burnett told the Jordan Times in May that the new discovery is “the only one of its kind discovered east or west of the Jordan River.”

The Bible describes the Ammonite people living side-by-side with the ancient Israelites. Referenced 123 times throughout the biblical account, the Ammonites lived between the Jabbok and Arnon Rivers, in the land anciently called Gilead, present-day Jordan. The Ammonites are descendants of Ben-Ammi, a son of Lot through an incestuous relationship under intoxication (Genesis 19).

Throughout the Bible, the Ammonites were described as one of Israel’s hostile neighbors, frequently allying themselves with the Moabites and the Syrians against Israel. Their persistent efforts to ally with Israel’s enemies can be seen in the foreign influences of their artistic style.

Once fully extracted from the landfill, the team was able to appreciate the full extent of the colossal 2-ton stone statue. Standing 2.1 meters tall, the basalt stone statue portrays a standing Ammonite king and contains a unique Ammonite blend of Egyptian and Assyrian motifs.

The statue’s large head and feet and plain presentation match the Neo-Hittite and Aramean styles of northern Syria and southeastern Anatolia. Its full beard and draped clothing with fringes and tassels matches the kings in Assyrian statuary. The arm position of the statue is a classic Egyptian posture that became widespread throughout the eastern Mediterranean. In “The Amman Theatre Statue and the Ammonite Royal Ancestor Cult,” released in December 2019, Burnett and Gharib wrote on this and other related, smaller examples of such a statue:

[T]he full beard and arm position combined with specific attire—a short-sleeve tunic, shawl draped over the left shoulder, and two ends of a belt hanging from underneath the front of the wrapped shawl—mark both the Amman Theatre Statue and the smaller examples as distinctly Ammonite royal images.

The figure depicted in the statue is seen holding a flower in his left hand. The lotus flower (or blue water lily) has an Egyptian artistic origin. In ancient Levantine art, if it was held in an upright position toward the face of the ruler, it symbolized the life and rejuvenation enjoyed by a living king; if it was turned downward or away from the ruler (as is the case of this statue), it is commonly called the “drooping lotus,” signifying a deceased leader at the time of construction.

According to the two archaeologists, the colossal statue would have likely either stood in a quarter of the Iron Age city dedicated as a memorial to deceased Ammonite kings, or it may have stood by a gate or building structure.

A partially reconstructed inscription at the foot of the statue names the figure as “Yarh-Azar, son of Zakar, son of Shanib.” Burnett told the Jordan Times, “His grandfather Shanib may well be the Ammonite king Shanipu named in an Assyrian inscription around 734–733 b.c.e.” If this hypothesis is correct, that would put Yarh-Azar’s reign around 700 b.c.e.

The Bible describes King Jotham of Judah’s successful subjugation of the Ammonites during his reign (2 Chronicles 27:5). This likely occurred during the reign of the above-mentioned grandfather, King Shanib. The Ammonites were condemned around this time period by the Prophet Amos, “because they have ripped up the women with child of Gilead,” the territory of the eastern tribes of Israel (Amos 1:13; King James Version). It is unclear what happened to the Ammonites following Jotham’s reign; however, over a century later, the Prophet Jeremiah warned the Ammonites of an impending captivity at the hand of the Babylonian Empire. This event would likely have been witnessed by Yarh-Azar’s children or grandchildren.

Burnett concluded, “My own analysis of the statue’s artistic motifs—the elaborate clothing and, most importantly, the headband-type diadem and lotus flower—confirm that the Yarh-Azar statue portrays an Ammonite king, making him one of seven or eight named in Ammonite and Assyrian inscriptions.” And we might add, an additional three mentioned in the Bible.

This colossal statue, then, adds to the growing trove of evidence supporting the existence of the Ammonite state as described in the Bible.