Could Egypt Fall to Iran? 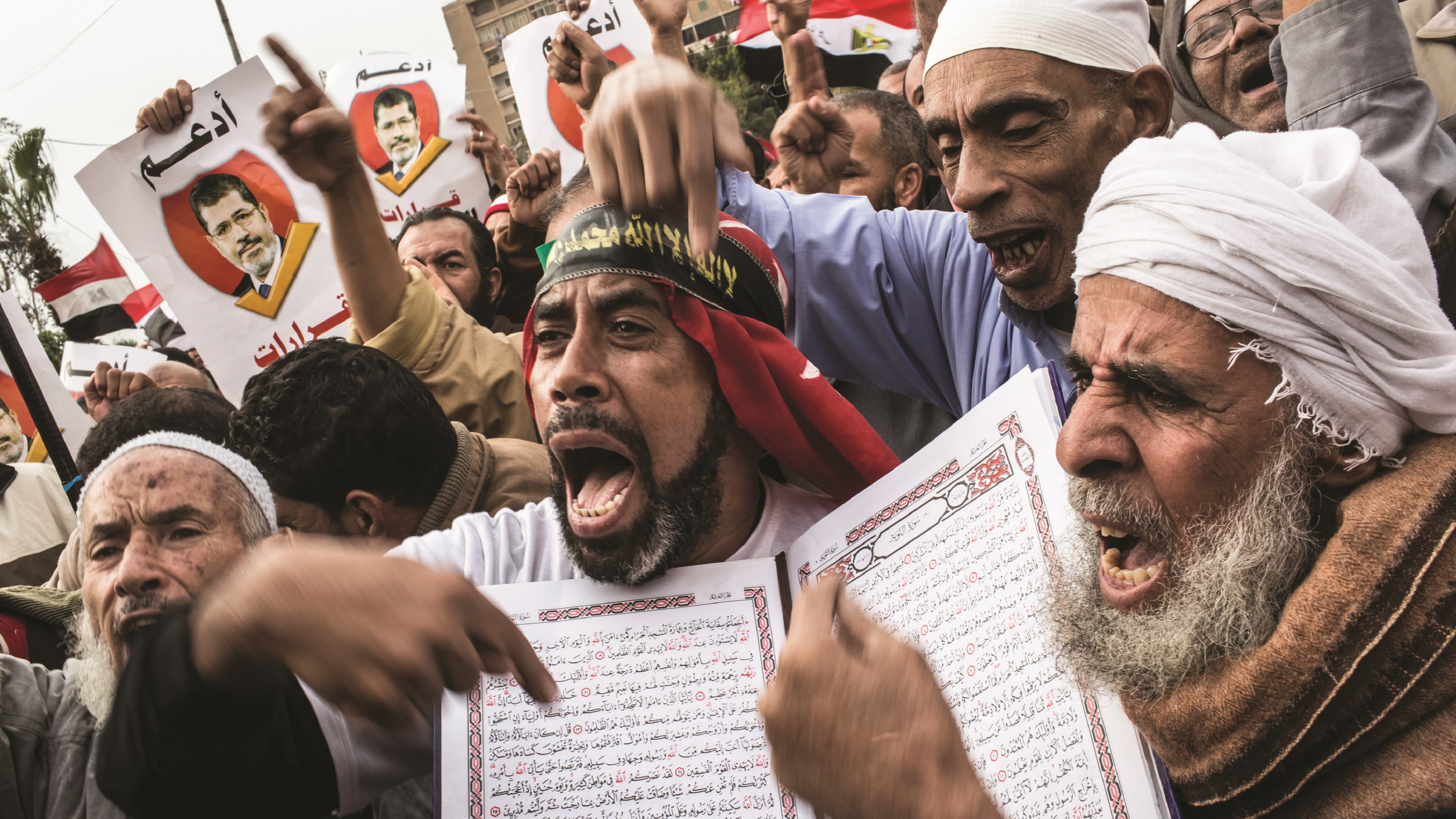 Many today believe that Iran and Egypt could never be allies. The differences between these two nations are too great. Egypt is Arab and Sunni; Iran is Persian and Shiite. Egypt has one of the most brutal counterterrorism programs in the Middle East; Iran is the world’s largest state sponsor of terrorism. Egypt has a peace pact with Israel and close economic and military ties with America; Iran wants to incinerate “the little Satan” and “the great Satan.”

Yet despite these glaring differences, the Bible prophesies that Egypt will ally with Iran in the
end time.

This bold forecast has come close to being fulfilled once already. In December 2010, Tunisian Mohammed Bouazizi set himself and the Middle East on fire. His self-immolation ignited a region fuming over civil injustices, widespread corruption and extreme poverty. Thousands of anti-government protests started in Algeria, Lebanon and Syria, and consumed entire regimes in Egypt, Libya, Tunisia and Yemen.

The greatest casualty of the Arab Spring was Egyptian President Hosni Mubarak, who was ousted in February 2011. In May and June 2012, Egypt held its first and only free democratic elections and chose Muslim Brotherhood leader Mohamed Morsi
as president.

This decision by the Egyptian people shocked and worried many in the West. In 2011, Stratfor Worldview warned that the most dangerous threat to the Middle East, other than Iran getting a nuclear bomb, was radical Islamists gaining control of Egypt. This is exactly what happened, virtually overnight.

From the moment Morsi became president, Egypt began strengthening its relationship with Iran.

If at First You Don’t Succeed

In August 2012, Morsi became the first Egyptian president to visit Iran since the 1979 Iranian Revolution. Six months later, Mahmoud Ahmadinejad became the first Iranian president to visit Egypt’s capital since 1979. Morsi and Ahmadinejad disagreed on Syria and other issues, but they quickly improved political ties, economic cooperation and other common goals.

Within 12 months, Iran and Egypt had reestablished bilateral diplomatic relations. Trade between the two countries jumped. Each nation opened an embassy in the other’s capital. Egypt nominated its first ambassador to Iran and direct flights resumed between Cairo and Tehran. An Iranian warship passed through the Suez Canal for the first time since the 1970s.

“Mohamed Morsi completed Egypt’s transformation into an Islamist state,” Jerusalem Post columnist Caroline Glick wrote in 2013, warning that Morsi held “dictatorial powers surpassing by far those of erstwhile President Hosni Mubarak.” That is quite a statement: Mubarak had held, to say the least, a high degree of dictatorial power.

Fortunately for Israel and the West, Morsi’s tenure was short. In July 2013, Egypt’s Islamist president was overthrown in a military coup and replaced by Defense Minister Abdel Fattah al-Sisi.

Morsi’s departure halted Egypt’s rapid transformation into an Islamist state and key Iranian ally. Disappointed government officials in Tehran blamed Morsi’s fall on his failure to separate from Saudi Arabia and restructure Egypt’s military. Morsi’s departure, however, did not stop Tehran from drawing closer to the Muslim Brotherhood.

In November 2019, the New York Times and The Intercept reported on a trove of leaked files from Iran’s Ministry of Intelligence and Security. The documents reveal a secret 2014 meeting between Iran’s IRGC Quds Force and the Muslim Brotherhood.

On Nov. 18, 2019, the New York Times and The Intercept reported on a trove of leaked files from Iran’s Ministry of Intelligence and Security. The leaked files show that since Morsi’s fall in 2013, Iran has worked closely with the Muslim Brotherhood and its London office to organize meetings between the two groups. For example, one document revealed a secret meeting between top officials of Iran’s Islamic Revolutionary Guard Corps Quds Force and the Muslim Brotherhood.

The meeting took place in Turkey, less than a year after Morsi was deposed. Representing the Muslim Brotherhood were four prominent Egyptian leaders, including Ibrahim Munir Mustafa, the Brotherhood’s deputy supreme guide.

Although the Shiite Iranians and the Sunni Muslim Brotherhood have a deep religious rivalry, Muslim Brotherhood leaders said at the meeting that the two sides should “focus on joint grounds for cooperation”; join forces in Yemen against Saudi Arabia, their “common enemy”; and “defuse” the Sunni-Shiite conflict in Iraq.

According to the Carnegie Middle East Center, since 2016, at least two organizations close to the Iranian government have invited Muslim Brotherhood members to attend conferences in Iran. At the Islamic Unity Forum in July 2017, Ayatollah Mohsen Araki, an adviser to Iranian Supreme Leader Ali Khamenei, met with Munir to continue improving ties.

Despite their differences, Iran and the Muslim Brotherhood share the geopolitical goals of driving out the United States from the region, destroying Israel, and spreading political Islamic rule.

Iran sees the Brotherhood as a “bridge for improving relations with the Sunni Muslim world,” the Carnegie Middle East Center wrote (March 19, 2019). Given the movement’s broad reach and contacts, it could be a persuasive advocate for the Iranian-led “axis of resistance” against U.S. influence in the region and, importantly, a mediator with fellow Sunni Islamist groups hostile to Tehran.

In the meantime, the Muslim Brotherhood is waiting for “the right political context to reemerge as a force in Egypt” (ibid).

Six and a half years have elapsed since Egypt’s military pushed the Muslim Brotherhood from power, and Egypt is again volatile. Poverty persists. Government figures show that one third of Egyptians now live below the poverty line, an increase of more than 4 million people since 2015. Many worry that another Arab Spring is imminent.

Last September, thousands of Egyptians marched in the streets of Cairo to protest Sisi’s government. Security forces dispersed the rioters with tear gas, rubber bullets and even live ammunition. More than 3,000 protesters were arrested, many of whom have ties to the Muslim Brotherhood. The protests have died down—for now.

President Sisi reacted quickly and forcefully because he was concerned that the Muslim Brotherhood would exploit the crisis to regain power. On Sept. 20, 2019, Egypt’s mbc Masr television broadcast a Muslim Brotherhood leader calling on the Egyptian people to gather at city squares to protest President Sisi. Muslim Brotherhood members are again actively spreading an anti-government message throughout Egypt. They want a second
Arab Spring.

Statistics show that Egypt is ripe for another revolution. A 2017 Pew Research Center survey found that 75 percent of Egyptian Muslims favor Islamic influence in the nation’s politics, and 74 percent favor making Sharia law into the official civil law. Of those who support Sharia law, 81 percent support stoning adulterers, 70 percent support cutting off the hands of thieves, and 29 percent believe suicide bombings that kill civilians can be justified.

“What happened in January and February of this year [2011] was only a small dress rehearsal of what is about to explode in the Middle East!” wrote Gerald Flurry, editor in chief of Watch Jerusalem. “This all plays into the hands of Iran and its strong ties to the Muslim Brotherhood. What happened to Iran in 1979 is somewhat similar to what will happen in Egypt” (Philadelphia Trumpet, April 2011).

Egypt’s alliance with the Islamic Republic of Iran is prophesied in the Bible.

“And at the time of the end shall the king of the south push at him; and the king of the north shall come against him like a whirlwind, with chariots, and with horsemen, and with many ships; and he shall enter into the countries, and shall overflow, as he passes through” (Daniel 11:40).

What is prophesied for Egypt?

“He [referring to the king of north] shall stretch forth his hand also upon the countries; and the land of Egypt shall not escape. But he shall have power over the treasures of gold and silver, and over all the precious things of Egypt; and the Libyans and the Ethiopians shall be at his steps” (verses 42-43).

These verses state plainly that Egypt, Libya and Ethiopia will be conquered by the king of the north. That means they must be allied with Iran as part of the king of the south!

“The radical Islamic movement, led by Iran, is very strong in Egypt, Algeria, Libya and Ethiopia,”
Mr. Flurry writes in The King of the South. “This religion will probably take control of these countries very soon.”

This prophecy in Daniel tells us to expect Iran to gain more influence in Egypt, prior to a major war with Europe. Daniel 11:42 shows that relations between Cairo and Tehran will improve, and that Iran in the coming months and years will establish a much stronger presence on Israel’s southern border.

We have seen an Iran-Egypt axis develop once already—and we will soon see it again!