Was This Where the Ark of the Covenant Sat?

Archaeologists uncover a ritual table stone, with peculiar parallels to the biblical account of the lost ark.
By Christopher Eames • January 23, 2020 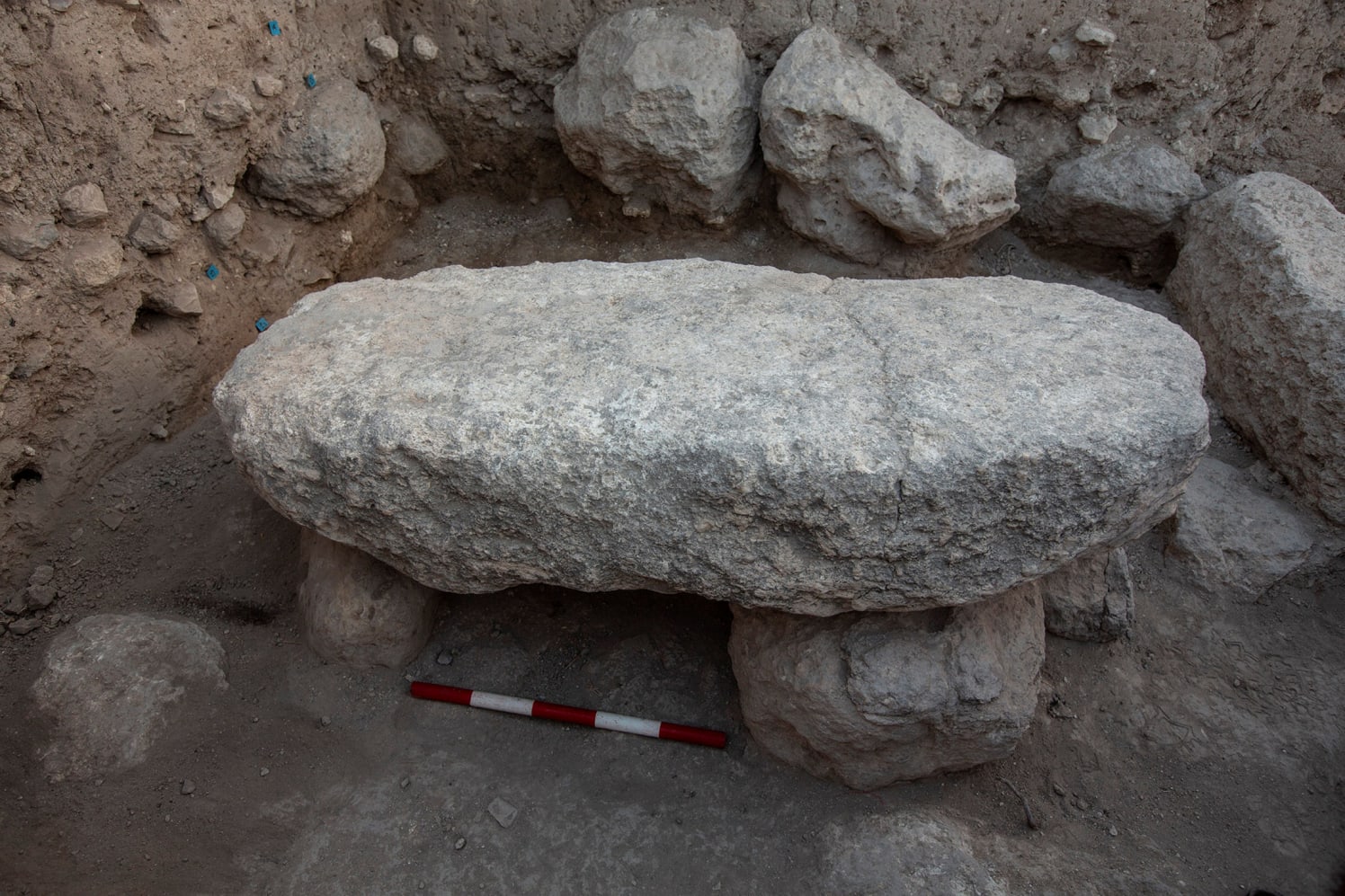 No, they haven’t discovered the ark of the covenant. But excavators at Beth Shemesh might have identified where it was placed.

In December, archaeologists at the site uncovered a giant flat stone ritual table. This peculiar stone, supported by stone “legs,” was discovered inside a temple dating to around 1100 b.c.e. And it may be the very same stone mentioned in the biblical account of the ark of the covenant.

Around this time period in the biblical chronology, the ark had been captured by the Philistines and taken to Ashdod (1 Samuel 5). The Philistines soon found, however, that wherever the ark went, havoc followed—in particular, the spread of a bubonic-type plague. The ark was taken from one city to another, causing the same result. Finally, the Philistines placed the ark onto a cart, hitched it to two cows, and set them free. The story picks up in 1 Samuel 6:13-15:

And they of Beth-shemesh were reaping their wheat harvest in the valley; and they lifted up their eyes, and saw the ark, and rejoiced to see it. And the cart came into the field of Joshua the Beth-shemite, and stood there, where there was a great stone; and they cleaved the wood of the cart, and offered up the kine for a burnt-offering unto the Lord. And the Levites took down the ark of the Lord, and the coffer that was with it, wherein the jewels of gold were, and put them on the great stone ….

Excavation codirector Dr. Zvi Lederman identifies this as a case in which “we can merge the biblical narrative with an archaeological find.” The parallels are evident: Both the account and the discovery center around Beth Shemesh, both relate to about the same time period, and both feature a “great stone.” Could this notable stone have been the table on which the ark was placed?

There has been some speculation to the contrary. The biblical account seems to place the “great stone” in a field in Beth Shemesh, rather than within a temple-like structure inside the city. This may well be the case. But it also may not be the best interpretation of the Scripture. Verse 14 describes ritual sacrifices being made. It would make sense for these to be done in the city temple (as we will see, the Beth Shemesh population at this point in time was hardly righteous). Further, it would hardly stand to reason for the ark, and the golden jewels that the Philistines made, to be left out in the middle of a field. Or, perhaps, this large stone discovered by the excavators is simply not large enough to best fit with the biblical description. Again, the find is not conclusive, and the reader will have to make up his or her own mind. Still, the parallels are tantalizing.

The building in which the great stone was discovered was clearly a temple-like ritual structure. Sacrificial waste was discovered, including animal bones. The perfectly square building faced east, its corners aligned with the cardinal compass points—a ritually significant orientation. As they excavated the building, what they thought was thick ash layering turned out to be animal manure. Evidently, the building had been destroyed and desecrated, turned into some kind of animal enclosure.

The biblical account states that the arrival of the ark at Beth Shemesh was soon followed by disaster. A number of people took the forbidden step of peering into the ark (think Indiana Jones)—and as a result, a large number of individuals fell dead (verse 19—there is much debate about the exact translation of the sum). Perhaps this event led to the temple’s desecration—whether or not this was the stone on which the ark was placed. The mourning people of Beth Shemesh sent the ark off to Kirjath Jearim.

And in a remarkable stroke, it was also last year that reports broke of a possible “ark of the covenant” discovery at Kirjath Jearim. Excavators there uncovered a massive stone-built platform, 1.7 hectares in size. The platform dates to the eighth century b.c.e., long after the ark departed for Jerusalem. Still, the archaeologists at the site believe it was built as a sort of “memorial” to the placement of the ark.

The ark of the covenant remains elusive. But over the past year, at least the trail has been highlighted. And a remarkable end-time prophecy in Jeremiah implies that the ark itself will one day be found. Could the recent discoveries at Beth Shemesh and Kirjath Jearim be a harbinger?