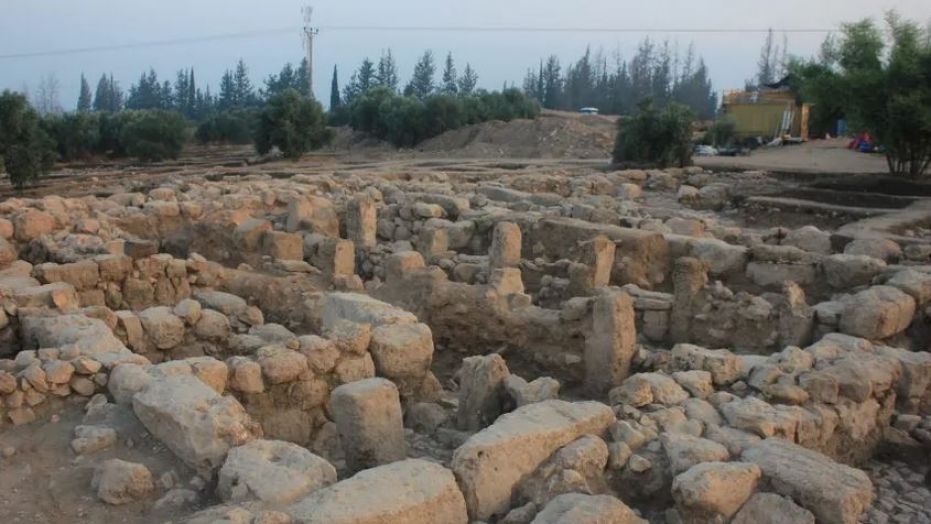 Archaeologists have discovered a monumental pillared building at Horvat Tevet, an ancient site in the Jezreel Valley just outside the city of Afula. They believe the complex served as an estate for Israelite officials to collect and redistribute agricultural products in the surrounding region.

The ruins at Horvat Tevet were uncovered as part of an ongoing salvage excavation. Due to the planned construction of a new route for Israel’s Highway 65, archaeologists from the Israel Antiquities Authority and Tel Aviv University have been hurriedly excavating the site for the past two years. According to them, the most prominent remains at the complex date to the ninth-century b.c.e. reigns of Israelite kings Omri and Ahab.

Dr. Omer Sergi, a Tel Aviv University archaeologist who codirects the research of the site, told Haaretz that the pillared “royal estate” at Horvat Tevet is “the best preserved building of the house of Omri ever found in Israel.”

The industrial complex at Horvat Tevet is dominated by the large pillared building. Measuring about 20 meters long and 30 meters wide, the structure was partitioned into three sections: two entrance rooms at the sides and a central hall with two rows of monolithic stone pillars—some of which still stand two meters tall, but would have likely been much higher.

The building’s foundation was constructed from well-chiseled limestone blocks. Because the local stone is basalt, the limestone blocks must have been brought from afar. Sergi also noted that the floors of the building were elegantly paved, which is unusual for the time period (when most interior surfaces were left bare). The sheer size and grandeur of the building seem to indicate that it was used as a royal administrative center, and also show the power and prosperity of Omri’s rule.

Though the name Horvat Tevet (“ruins of Tevet”) does not appear in the Bible, Sergi noted that the area was part of the tribe of Issachar’s allotment (Joshua 19:17-23). Scholars have tried to match the site with either Jezreel or Shunem.

Archaeologists discovered the remains of an earlier pillared structure below the existing Omride building, which may have been used for similar administrative and agricultural purposes. Sergi dated the earlier structure to the beginning of the ninth century b.c.e., to the prosperous reign of King Baasha (third ruler of the northern kingdom of Israel). This building’s use as an agricultural distribution center may indicate some of the prosperity Baasha’s kingdom experienced.

The biblical account continues that, because Baasha “walked in the way of Jeroboam” and “made my people Israel to sin,” God said He would “take away the posterity of Baasha” (1 Kings 16:2-3; King James Version). Baasha’s son, Elah, was killed in a military coup led by Zimri.

After Zimri’s coup, Israel turned to Omri, captain of the army, and made him the new king of Israel. The earlier structure was destroyed just after 900 b.c.e., along with Baasha’s capital Tirzah, likely in the same violent power struggle (verse 17). Omri emerged from the conflict as the sole leader of the northern tribes of Israel. Artifacts such as the Black Obelisk of Shalmaneser, the Mesha Stele and the Kurkh Monolith reference King Omri by name.

Omri began ruling from Tirzah, but six years into his reign he purchased the hill of Samaria and built a new capital, establishing a new dynasty (verse 24). Omri’s son, Ahab, continued his monumental building projects and built a house of Baal in Samaria.

In one of the entrance rooms, archaeologists found an Israelite-style four-horned stone altar (Exodus 27:2), likely used for sacrifices. Sergi said that the altar does not mean the building was a temple, because at the time it was common for religious activity to take place in administrative centers. This hearkens back to King Jeroboam making “priests from among all the people, that were not of the sons of Levi” (1 Kings 12:31), a practice which continued throughout the northern kingdom’s history.

A large, ancient agricultural industrial zone surrounded the pillared Omride building. Archaeologists found pottery kilns, grinding stones used to mill grain into flour, and several textile workshops. Large Omride-style storage jars found in the complex, used by the royal administration for the distribution of goods, have also linked to other Israelite cities such as Jezreel, Megiddo and Rehov. While only a few dozen such jars have been found in urban centers, hundreds have been found in smaller rural areas. “This suggests that Tevet may have been the point of origin for these jars, or rather, for whatever goods they contained,” Sergi posited. “It was a probably the location where the royal administration collected, stored and redistributed agricultural produce from the entire region.”

The construction and eventual destruction of the Horvat Tevet complex matches the same period of Omride construction and destruction found at Jezreel, Megiddo and Samaria. According to the archaeologists, the pillared royal estate was largely evacuated and its entrances were walled off during a later invasion, most likely by the Arameans in circa 840 b.c.e. The invaders set the pillared structure on fire, which would have caused the roof to collapse on the building, leaving the structure below mostly intact. This may have been part of the Aramean conflict described in 2 Kings 9 and on the Tel Dan Stele.

A massive fortress was built next to the ruins of the building almost immediately after its destruction. The discovery of large grain silos associated with this fort suggests the area continued its agricultural use.

Sergi commented: “Nowhere else can you go into a palace built by the house of Omri and see it like it stood on the day it was destroyed—there is no such thing in the country.”

Excavations at Horvat Tevet will continue forward over the next seasons as it is prepared for the construction of a new road. “Ironically, the reason the monumental complex was constructed there in the first place is the same reason why the modern road is going to be built and the site destroyed,” Sergi added. “Because then, as now, this is the best route through the Jezreel Valley and north toward the Galilee and Phoenicia. The road has been passing there for thousands of years.”

Horvat Tevet is just one of many archaeological sites undergoing emergency excavations because of upcoming infrastructure projects throughout Israel. Similar excavations at Beth Shemesh, west of Jerusalem, have uncovered extensive first temple remains and artifacts including the Samson Seal and the “great stone.”

Stay tuned to our archaeology feed for more articles on past and future discoveries.