Europe’s Naval Mission to Counter Iran in the Persian Gulf 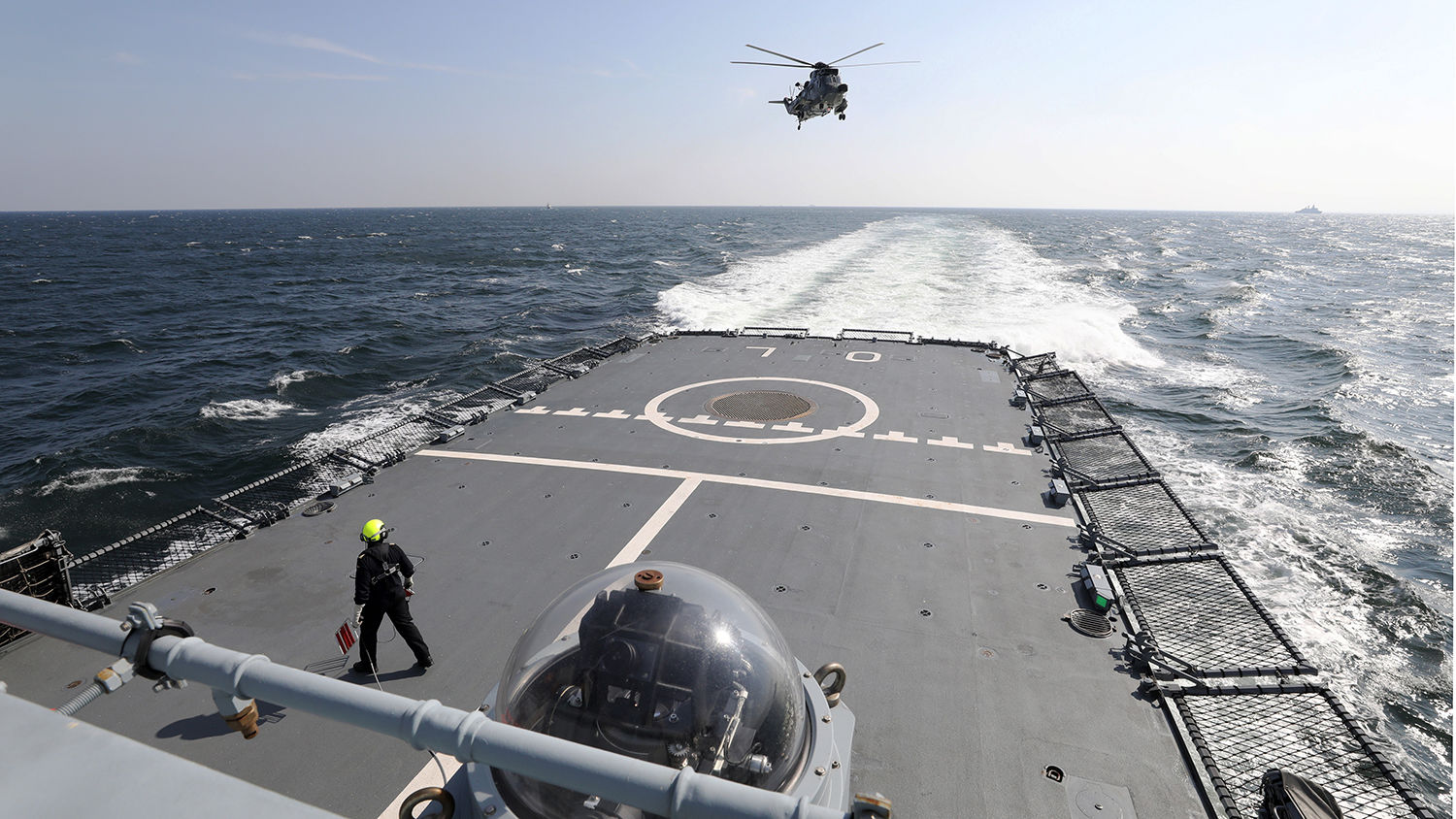 During the “Northern Coasts” naval autumn maneuver in September 2019, a helicopter lands on a corvette of the German Navy on the Baltic Sea.
BERND WÜSTNECK/PICTURE ALLIANCE VIA GETTY IMAGES

The United Kingdom has left the European Union, and now, after years of Watch Jerusalem forecasting, Europe is beginning to unite against a common threat.

France’s first frigate began patrolling the Persian Gulf on January 30 as part of the new European naval mission to protect its vessels by deterring future Iranian attacks. A Dutch frigate is due to join the mission within the next two weeks.

According to the French Defense Ministry, the mission “aims to guarantee freedom of navigation in the Persian Gulf and the Strait of Hormuz, while protecting European and international economic interests.”

Today the frigate @HNLMS_RUYT sails to the Street of Hormuz. As part of the European-Led mission Awareness Strait of Hormuz. Objectives: Maritime security, freedom of navigation and de-escalation of tensions.
Safe voyage for the 200 sailors on board! #ambconf #diplomatie #EMASoH pic.twitter.com/i1hc25DPgp

The European Maritime Surveillance Mission in the Strait of Hormuz (emasoh) will aim to escort and protect its oil tankers and cargo ships traversing the Persian Gulf and the Strait of Hormuz, which facilitates about 30 percent of all seaborne crude oil trade.

Only 34 kilometers wide at its narrowest point and with most of its coastline controlled by Iran, the shipping lane is highly vulnerable to attack. The U.S. Energy Information Administration called it “the world’s most important oil transport choke point.”

After several attacks on oil tankers and Saudi oil processing facilities last year, a trove of condemning evidence points to Iran as the culprit. As a result, France has pushed Europe to become more active in the region to counter Iranian aggression.

The French ministry claimed that the regional instability cause by the attacks, allegedly by Iran, have “undermined the freedom of navigation and the safety of European and foreign ships” and have “jeopardized trade and energy supply, which is likely to have economic consequences in the whole world.”

Ever since the breakup of the Ottoman Empire, the Middle East has become synonymous with proxy warfare—where major powers indirectly fight their wars. Britain, France, Russia and the United States have historically been those major powers. However, the U.S. is on the way out, and a new contender is stepping in to replace it.

On Dec. 19, 2018, U.S. President Donald Trump announced his plan to withdraw American troops from Syria—and the Middle East. While the Trump administration has compromised on its plan, stating that it would leave a few hundred troops, the trend shows that America is on the way out.

On January 8, the U.S. called on the EU to take over the Middle East. Since then, Germany has significantly increased its involvement in Middle East affairs.

Germany and two other European nations triggered the Iran nuclear deal Dispute Resolution Mechanism on January 14, a process that could lead to reimposing United Nations sanctions on Iran. On January 16, German Foreign Minister Heiko Maas visited Benghazi, Libya. Three days later, Germany hosted a diplomatic conference to discuss solutions to the civil war in Libya. Though the meeting was a complete failure, to Europe, it highlighted the need for German intervention.

Now, Germany has joined Europe’s anti-Iran naval mission in the Persian Gulf. At the moment, Germany is not leading the mission, nor has it committed any military hardware to the mission. However, this will change.

Though all of Germany’s moves in the Middle East have been relatively small and almost unnoticeable, it shows a dangerous trajectory. Germany wants to get more involved, not only politically, but also militarily.

For anyone who has studied history, this should be alarming news. It should be reported by every major news agency. But the sad reality is, instead of being alarmed, the world is actually pleading for more German leadership—just as it did during the 1930s.

Watch Jerusalem and its predecessor the Plain Truth have followed this trend ever since Germany lost World War ii and went underground planning its return to power.

Though we have seen a recent upsurge in German leadership in the Middle East, the nation has a long history of involvement in the region. Notice what Watch Jerusalem editor in chief Gerald Flurry writes in The King of the South (free upon request):

Germany has expected to clash with Iran, and it has been working on a strategy for a decade or more. That strategy is almost complete. Germany has surrounded Iran.

Who are these two powers?

In The King of the South, Mr. Flurry writes:

Iran’s sabotage of foreign oil tankers (such as on June 13), attacks on oil processing facilities (such as at Abaqiq on September 13), and its nuclear belligerence (including missile testing and uranium enrichment) are all ways that Iran is pushing at the king of the north.

Mr. Flurry has identified the king of the north as a German-led, 10-nation European Union as forecast by Plain Truth founder Herbert W. Armstrong. In a co-worker letter dated June 22, 1983, Mr. Armstrong wrote:

The prophecy of Daniel 2, concerning the Babylonian King Nebuchadnezzar’s dream of a stupendous image, foretold the rise of other world empires to follow Babylon of 604 b.c. Following was to come the Persian Empire, to be succeeded by the Greco-Macedonian Empire, and it in turn by the Roman Empire of 31 b.c. to a.d. 476. It was restored by Justinian in a.d. 554, first with a Roman leadership, then a French in 800, then the German dynasty of Otto the Great called the Holy Roman Empire. It was followed by the Habsburg Austrian dynasty, and by a brief “restoration” under Mussolini, … this in turn is to be followed (and is now forming) by a united Europe … covering both East and West Europe, as pictured by the feet and toes of Daniel 2:44.

Then in a letter dated Feb. 25, 1985, a couple years before the signing of the Single European Act, which established more political cooperation and further cemented economic ties in Europe, he warned:

Daniel’s prophecy in chapter 2 pictures 10 nations in Europe in our time right now, as the 10 toes on the two feet of the great symbolic image. Five of these toes picture five nations in Western Europe and five in Eastern Europe.

Today, the post-Brexit European Union has 27 member states. According to Bible prophecy, 10 nations or groups of nations in Europe will unite to form the king of the north.

When this German-led superpower finally attacks Iran, it will come with “many ships” as Daniel 11:40 states. Already, we are beginning to see Europe move toward this direction, as eight nations are now supportive of the European naval mission.

The king of the north will sweep through Libya, Egypt, Ethiopia and even into Israel, the “glorious land,” in order to destroy Iran and its radical Islamic network (Daniel 11:42-43). This mighty, powerful northern army will even surround the city of Jerusalem.

This horrific world war leads directly to the greatest event on this Earth: the prophesied coming of the Messiah.

Daniel 2:44 says, “And in the days of these kings shall the God of heaven set up a kingdom, which shall never be destroyed: and the kingdom shall not be left to other people, but it shall break in pieces and consume all these kingdoms, and it shall stand for ever.” When the Messiah comes, He will “brake in pieces” this European power and set up an eternal kingdom that will finally bring real, lasting peace to this Earth.

For more information about this coming clash, read the November-December Watch Jerusalem cover story, “How Iran Will Be Conquered,” by Gerald Flurry.