In the shadow of Trump’s ‘deal of the century,’ Hamas calls for escalating confrontations with Israel.
By Brent Nagtegaal • February 6, 2020 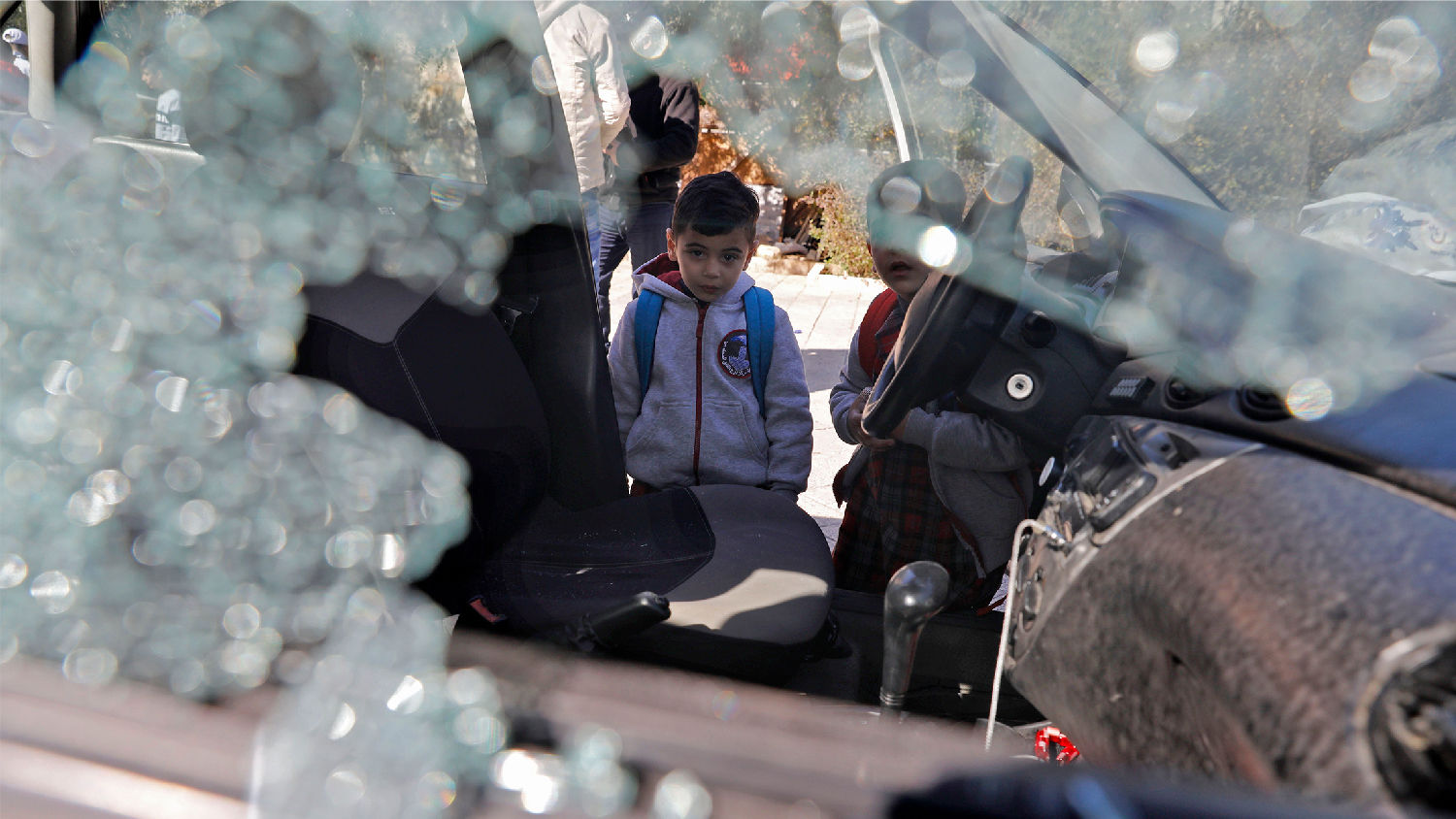 Palestinian children are pictured through a car’s shattered window that was damaged during a shooting attack in Jerusalem’s Old City on February 6.
AHMAD GHARABLI/AFP VIA GETTY IMAGES

jerusalem
In the space of 12 hours on Thursday, Israelis received news of three terrorist attacks in Jerusalem and the West Bank.

Before dawn, a car-ramming took place in a highly trafficked area by Jerusalem’s popular First Station entertainment complex. The attack injured 12 soldiers as they toured Jerusalem before they were due to attend a swearing-in ceremony at the Western Wall. The car used in the attack was found deserted just outside of Bethlehem, less than five miles from where the attack took place. The terrorist was apprehended later in the day.

At noon, another terrorist opened fire at Israeli border police at the eastern side of the Old City. “An assailant approached officers who were stationed near the Lions Gate, and opened fire at them,” police said. “Other officers responded quickly, firing at the assailant and neutralizing him.” According to Israeli television, the terrorist was a 40-year-old man from the north of Israel who had recently converted to Islam. One police officer was shot in the attack, although he was only moderately injured.

A few hours later, reports emerged of a third attack; this time a drive-by shooting outside of Ramallah, which saw a soldier lightly wounded. According to the Israel Defense Forces, a gunman opened fire at a group of soldiers stationed near the Parsa Junction outside the Dolev settlement. The soldier is fortunate to be alive as the bullet shot from the terrorist grazed his head.

In response to these attacks, Prime Minister Benjamin Netanyahu canceled a planned press conference and is conducting a security assessment.

Since the unveiling of United States President Donald Trump’s “deal of the century” last week, tensions between Israelis and Palestinians have increased inside the West Bank and at the Gaza border. Several rockets and mortars were fired into Israel from Gaza, and riots have erupted in Jenin and Hebron.

On Wednesday, the military reported that a Palestinian teenager was shot dead by Israeli troops as he threw a Molotov cocktail at them in Hebron.

In response to the death, on Wednesday the Hamas terrorist group called for “escalating confrontations with the occupation and its settlers and fighting their assaults against the land and holy sites, especially the blessed al-Aqsa Mosque.”

After the attacks, Hamas released a statement on its website saying that “the revolution raging in the West Bank cities and in Jerusalem is the implementation of the Palestinian people’s decision to expel the occupation from the West Bank and free it of settlers.”

The leadership of the rival Palestinian group Fatah released its own statement blaming the peace plan for the uptick in violence. The Trump peace plan has “created this atmosphere of escalation and tension by trying to impose fake facts on the ground, which we have repeatedly warned against,” wrote Nabil Abu Rudeineh, Mahmoud Abbas’s spokesperson, in a statement posted on the Palestinian Authority official site Wafa.

Israeli Police or the idf are yet to claim any connection between Hamas’s statement, “the deal of the century” and Thursday’s attacks. However, the quick succession of the terrorist acts after a long period of relative calm seems to be more than coincidence.

Also, the effect of the timing of the attacks and, in particular, the location of the car-ramming will have an outsized impact on Jerusalem residents, especially on those who have moved to the city in the past decade. Being one of the only complexes open on the Sabbath, the First Station is a hub of activity on the weekend for families, tourists and working foreigners in the city.

While many are accustomed to hearing about terrorist attacks in the eastern parts of the Old City, as well as in the West Bank, rarely do such attacks occur in the western part of the city. This can make Jerusalem feel like an incredibly safe city, with attacks out of sight and out of mind.

Thursday’s attack just outside the First Station is far closer to home than any attack in recent memory and will certainly impact Jerusalem’s more insulated residents.

It is too soon to know whether these attacks are the beginning of a new terrorist wave or not. For their part, Israel’s internal security agencies are highly successful at foiling such attacks before they take place. Nevertheless, the attack on Thursday shows that when the weapon of choice is a white sedan, even Israel’s security apparatus cannot prevent every attack.

According to biblical prophecy, we can expect these types of attacks to continue inside the city of Jerusalem and even increase in the time ahead.

According to President Trump’s peace plan, Israel will continue to be sovereign over all of Jerusalem. This part of the deal nullifies the Palestinian claim to the Old City and much of what is traditionally called East Jerusalem. Justified or not, gifting all of Jerusalem to the Jews in the face of almost worldwide opposition means we can expect more violence as Israel moves forward with its stated intent to implement the deal regardless of whether the Palestinians accept the terms. It’s hard to see how this won’t infuriate the Palestinians further.

Prophecies for our time today found in the book of Zechariah speak about how an Arab revolt will come to violently take back half of the city of Jerusalem, including much of what President Trump has just declared to be part of Israeli Jerusalem. Yet those same verses also show the Arab takeover of half of Jerusalem is a preordained step toward Jerusalem’s long-term peace thereafter.

If you would like to learn more about these prophecies about the Arab takeover of half of Jerusalem, please request Watch Jerusalem editor in chief Gerald Flurry’s free booklet Jerusalem in Prophecy.