Horn of Africa Unification Paving Way for Fall to Iran

The ‘Cushitic Alliance’ and the Horn of Africa in prophecy
By Warren Reinsch • February 10, 2020 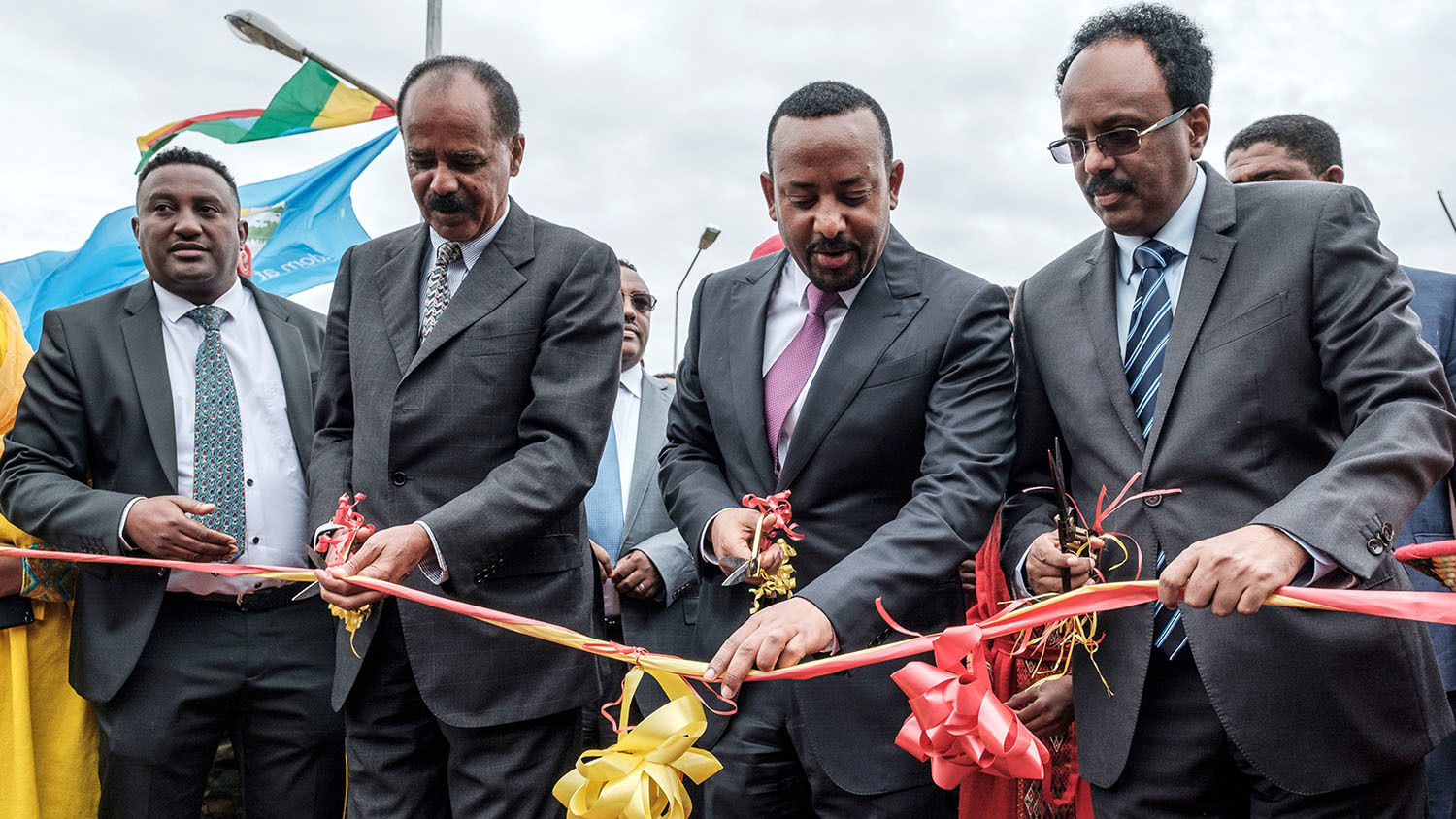 The leaders of Ethiopia, Eritrea and Somalia met in Asmara, Eritrea, on January 27 to discuss increasing cooperation and regional integration in the Horn of Africa. This new “Cushitic Alliance,” as it has been called, could be setting the stage for the realization of a united, radical Islamic Horn of Africa.

The meeting last month was the third time Ethiopian Prime Minister Abiy Ahmed, Eritrean President Isaias Afwerki and Somali President Mohamed Farmajo had met in the last year. The three leaders began by reaffirming their commitments to the Tripartite Agreement. The alliance signed in September 2018 stated:

The fledgling alliance also adopted a new Joint Plan of Action for 2020. According to Eritrean Information Minister Yemane Meskel, the plan will focus “on two main and intertwined objectives of consolidating peace, stability and security, as well as promoting economic and social development.” He continued, “They also agreed to bolster efforts for effective regional cooperation.” A later dispatch said the three leaders would focus on development and building infrastructure.

On the security front, the leaders formulated a strategy to combat common threats, such as terrorism, arms and human trafficking, and drug smuggling, according to AllAfrica.

The EastAfrican said that these efforts are leading “to some sort of Horn of Africa coalition,” even calling it a “Cushitic Alliance.”

At the Helm of the Horn

Spearheading the regional integration project, Abiy has been the biggest proponent of the unification of the Horn of Africa. Ever since he took control of the leadership of Ethiopia, he has worked diligently to reestablish the Ethiopian Navy, which it decommissioned in 1993 after it lost its coastline to Eritrea.

When Abiy announced his plan to bring back the Navy, he emphasized that a robust maritime force is required for having a united Horn of Africa. According to AllAfrica, Abiy has been pushing Ethiopia to integrate, “both economically and politically, with its neighbors around the region, including Eritrea, Djibouti, Somalia and others.”

Ethiopia is a massive economy in the region and it needs access to the sea to become an international trading giant. According to the Daily Nation, “For Ethiopia, a friendly leader in Jubaland [southern province of Somalia] will provide an unhindered access to the five Somalia’s Indian Ocean ports agreed with Farmajo: Kismayo, Balawe, Basasso, Barbera and Hobyo north of Mogadishu.” Additionally, Ethiopia has been making close relations with Eritrea to regain its port access there as well.

“[N]ow that Eritrea and Ethiopia are together,” said Macharia Munene, a professor of history and international relations at United States International University Africa, “[t]hey can form a strong economic bloc.”

Ethiopia is Africa’s second-most populous nation, with a population of more than 105 million people. It is the key player at the helm of East Africa.

Where Ethiopia goes, the rest of the Horn of Africa follows.

In The King of the South, Watch Jerusalem editor in chief Gerald Flurry writes, “Whoever heavily influences or controls Ethiopia will undoubtedly also control the small areas of Eritrea and Djibouti on the Red Sea coastline.” You could also add Somalia to that list.

Right now, Ethiopia is pushing for the unification of the Horn of Africa—an objective that has seen a large degree of success over the past two years. However, Ethiopia is also facing what could become “violent and divisive” elections in May. Sparked by ethnic divides, these elections could cause the nation to split down the middle, following ethnic, language and religious composition.

A prophecy in Daniel 11 describes the rise of an end-time Middle Eastern power called “the king of the south.” Verse 40 says that this power will have a very pushy foreign policy and eventually it will “push” at Europe. In The King of the South (free upon request), Mr. Flurry proves that radical Islamic extremism, led by Iran, is this prophesied Middle Eastern power.

Verse 43 says, “the Libyans and the Ethiopians shall be at his steps.” The Soncino commentary defines “at his steps” as either “joining his army or placing themselves at his beck and call.” The Gesenius’ Hebrew-Chaldee Lexicon says it should read “in his company.”

Ethiopia will be closely allied with Iran! Mr. Flurry continues in The King of the South: “These areas [Djibouti and Eritrea] only recently became independent of Ethiopia. Also, I believe the Bible view is that these small areas are included as a part of Ethiopia.” Eritrea is a part of Ethiopia. Analysts are now saying that “Eritrea and Ethiopia are together.”

The word Ethiopia is translated from the Hebrew name Cushi. Anciently, the kingdom of Cush was centered in Ethiopia. Today, the Cushitic language is indigenous only to the Horn of Africa and a pocket along the Red Sea coast in Sudan. It is a commonly accepted fact that a large majority of the people in Eritrea, Ethiopia and Somalia are of Cushitic ethnic background. Additionally, the Cushitic region is almost wholly Islamic.

Beja, or Bedawi, is spoken by the #Beja people on the coast of the Red Sea in #Egypt, #Sudan and #Eritrea. It’s a #Cushitic #language in the #Afroasiatic family. It has ~1.2m speakers. Some groups of Beja have switched to Sudanese #Arabic or #Tigre.#African #linguistics pic.twitter.com/CtYOVjN1ut

Ethiopia is where this divide between west and east, Cushitic and non-Cushitic, Muslim and non-Muslim meets. The Somali and Oromeia, which are two of the largest provinces and ethnic groups in Ethiopia, are both of Cushitic language and origin and are predominantly Muslim. However, the eastern provinces, primarily Tigray and Amhara, are both of non-Cushitic origin and are predominantly Christian.

It is this ethnic and religious divide down the center of Ethiopia that makes the instability of the May elections so dangerous. Ethiopia’s Christian-Muslim divide is an ongoing issue. On December 24, Al Jazeera reported that several thousand Muslims across Ethiopia protested the burning of four mosques in the Christian-dominated Amhara region. Meanwhile, in Amhara, thousands are protesting the ill treatment of Christian students in Muslim areas of Oromeia. This conflict is expected to worsen leading up to the May 2020 election as ethnic and religious conflict takes center stage.

As a result, Ethiopia is in danger of collapse. Such a scenario would provide radical Islam, led by Iran, an opportunity to hijack the nation’s politics and gain control of the nation. Once radical Islam controls Ethiopia, it is prophesied that the Cushitic Muslim Horn of Africa would follow Ethiopia and fall under the control of Iran.

Somalia is struggling to fight off the al-Shabaab terrorist group in its territory, one Iran has previously worked with. Sudan and Egypt have also been historic targets of Iran. Ethiopia is also in Iran’s sights.

Mr. Flurry writes, “You need to continue to watch for … Ethiopia to make a severe and rapid turn into the radical Islamic camp.” As Eritrea, Ethiopia and Somalia continue to strengthen their “Cushitic Alliance,” this Bible prophecy becomes more and more of a reality.