Is this the earliest reference to the tribe of Judah?
By Christopher Eames • March 21, 2020 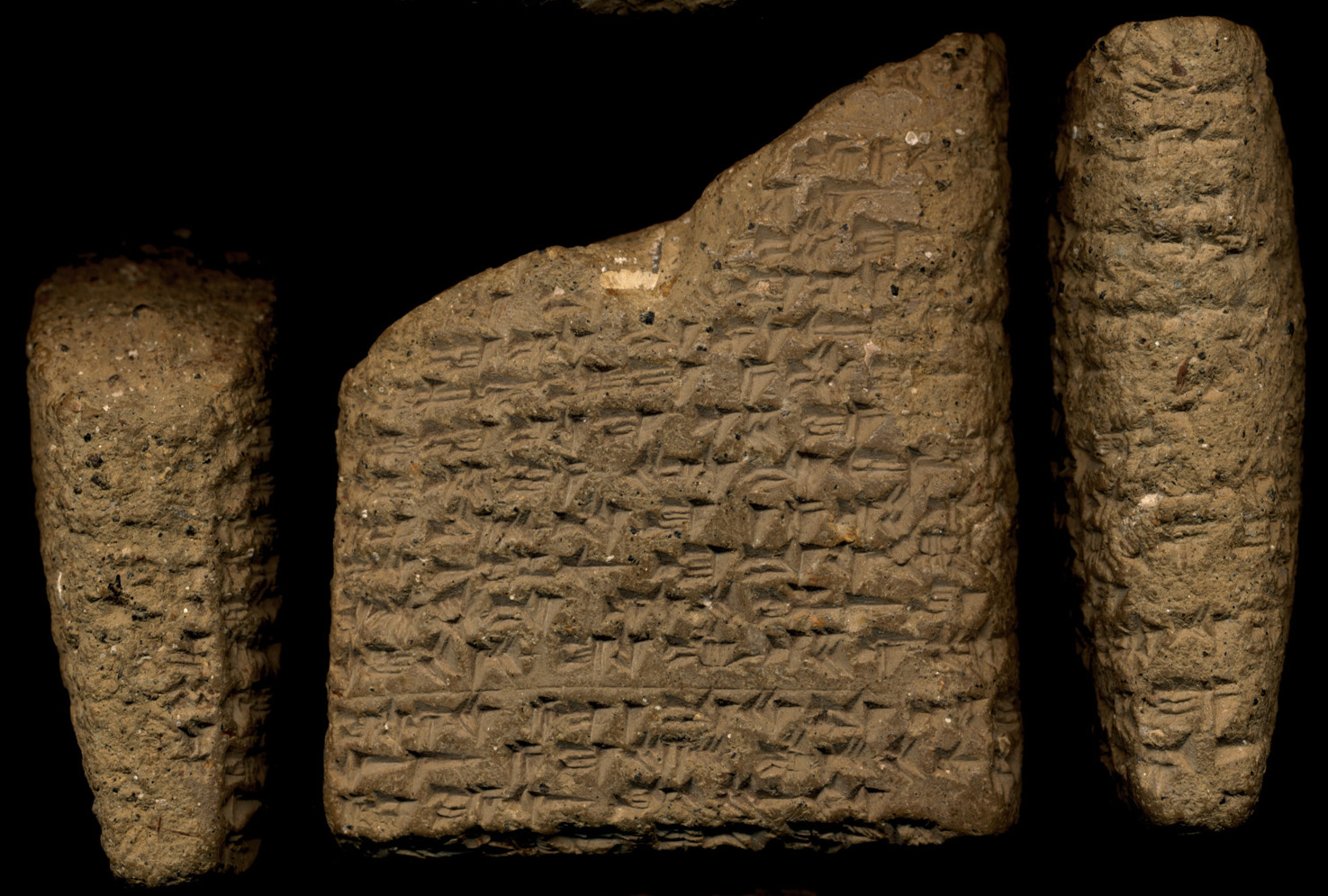 The Merneptah Stele is famous as the earliest confirmed inscriptional evidence for “Israel.” Dating circa 1205 b.c.e., the Egyptian victory stele proves that the Israelite nation was established in the Holy Land during the biblical period of the judges. Another damaged inscription—the Berlin Pedestal—almost certainly mentioning “Israel,” cannot be conclusively dated, but may predate the Merneptah Stele by 100 years or more.

Of almost as much significance as the national name Israel are the names of the individual tribes. The 12 tribes constitute veritable nation-states in themselves—the Bible describes fierce loyalties among the tribes. Devastating wars were fought among them. In Ephraim vs. East Israelites, 42,000 Ephraimites were killed (Judges 12). In Benjamin vs. Israel, 25,000 Benjamites were killed (almost wiping out the entire population), and 40,000 of the opposing 11 tribes (Judges 20). And virtually the entire monarchical period—from circa 925 b.c.e. to 720 b.c.e.—was defined by the split and constant hostilities between the independent northern 10 tribes of Israel and the southern kingdom of Judah.

There is some archaeological attestation to the tribal names. Most famously, the ninth-century b.c.e. Moabite Mesha Stele mentions the tribe of Gad, as well as one of its towns, Ataroth (Numbers 32:34). And the southern kingdom is repeatedly referenced in first temple period inscriptions, Israelite and foreign, as the namesake of the tribal father, Judah. But evidence points to this tribal name on the scene several centuries earlier—on an artifact dating to the 14th century b.c.e.—the period biblical chronology identifies as the conquest of Canaan.

The Amarna letters are a trove of nearly 400 cuneiform clay tablet documents sent from the leaders of Canaan to the Egyptian pharaoh. Many of these letters carry startling messages pleading for Egyptian help in repelling a widespread invasion by a nomadic people known as Habiru (also, Hapiru or ‘Apiru). Various letters from the embattled Canaanite kings to the pharaoh claim that “all the lands … are lost,” “not a single mayor remains,” “all the rulers are lost,” “the Habiru are stronger than we.”

One of these Amarna letters (EA 39) came to light just before the turn of the previous century (1900). Researchers noted references to “ameluti Ia-u-du” and “ameluti tsabe Ia-u-du.” The spelling of Ia-u-du is identical to that of later Assyrian cuneiform inscriptions referring to Judah (Judah is our Anglicized form of the Hebrew Yehuda). As such, we would have a translation of the above two passages as “men of Judah” and “soldiers of Judah.”

Prof. Morris Jastrow Jr. (1861–1921) wrote an article titled “‘The Men of Judah’ in the El-Amarna Tablets” addressing this identification (here). Some small debate had circulated at the time regarding the nature and correct interpretation of the inscription. One of the primary issues was that the inscription was related to territory in the extreme north of Canaan (midwest-Syria)—perhaps around the region of Tunip, a peculiar place to find “men of Judah.” There was some dissent that this referred to a slightly different, but similar-sounding word meaning “they have witnessed.” Jastrow, however, refuted this by showing that the context identifies Ia-u-du as a proper name for a clan or group.

But what would Judahite troops have been doing so far north? The tribe settled in the southern part of Canaan, but the Israelites were to conquer the Promised Land together, as a unit (e.g. Numbers 32). Further, the territory of Israel was intended to expand as far north as Hamath, in Syria—a location just east of Tunip (Numbers 34:8). Judges 3:2-3 describe the native men of this northern territory “teach[ing] them war.” Teaching the men of Judah?

Perhaps an even more definitive link is found in 2 Kings 14:28, which states that the territory of “Damascus, and Hamath … belonged to Judah” (King James Version). This was when the northern kingdom of Israel had been divided from the southern kingdom of Judah for quite some time—and yet the tribe of Judah somehow held an outpost north of Israel. There is a possible reference to this Judahite land—as well as the Judahite king at the time, Uzziah—on an Assyrian inscription (see here for more detail).

The biblical record provides good reason for Israelites—and “men of Judah” specifically—to be found as far north as midwestern Syria.

As an aside: In his article, Jastrow further highlighted two clan names mentioned in the Amarna correspondence—Milkil and Habiri, whom he identified as paralleling two clans of the tribe of Asher, Malkiel and Heber (Genesis 46:17; Numbers 26:45; 1 Chronicles 7:31). This pair was mentioned together in correspondence from the Canaanite leader of Jerusalem, Abdi-Heba, to the pharaoh.

Unfortunately, the section of text bearing the Ia-u-du titles is not in great condition, so the debate on the nature of the inscription is unsettled. Since Jastrow’s work, the Norwegian linguist Jørgen Knudtzon’s analysis, categorization and translation of the Amarna letters has been a go-to standard, with his two-volume work Die El-Amarna-Tafeln (1907 and 1915). Knudtzon translated this word differently, as s[u]*-u-du, with the footnote “Oder zu; nicht ia!” (“or zu; not ia!”). He equated this with the proper name Sudu (probably relating it to a Syrian fortress called Sudu).

Perhaps Knudtzon is right—or perhaps Jastrow. Or perhaps neither. The reader can make up his or her own mind. But doing so fairly would require a high level of study into an extremely niche subject. As such, we are beholden to the divergent interpretations of experts—until further evidence can be found.

Such is the unfortunate case with tiny, sometimes damaged or obscure inscriptions written in languages that have not been used for thousands of years. That is why the Merneptah Stele is the earliest proven evidence of the name “Israel,” and not the Berlin Pedestal (although in this case, the Berlin Pedestal is virtually certain). The Tel Dan Stele mentions the name “David” loud and clear—but does the Mesha Stele? The debate ignited again last year. Prof. Langlois: Yes. Prof. Finkelstein: No. Does this Moabite incense altar contain the earliest mention of the name “Hebrews”? Or do the Amarna letters contain the earliest attestation to the “Hebrews”? Or the Serabit el-Khadim inscription, Sinai 115? And does Sinai 361 mention the name of Moses? Prof. Petrovich: Yes. Prof. Rollston: No. Did the Isaiah bulla belong to the biblical prophet? Dr. Mazar: Yes. Dr. Misgav: No.

Do the 14th-century b.c.e. Amarna letters contain the earliest reference to the tribe of Judah? It is a tantalizing possibility that would fit with biblical chronology and even geography, and the wider context of the Habiru–Hebrew invasion of Canaan, described by the letters.