Bennett vows to ‘increase the strikes’ for ‘driving Iran out of Syria.’
By Warren Reinsch • February 13 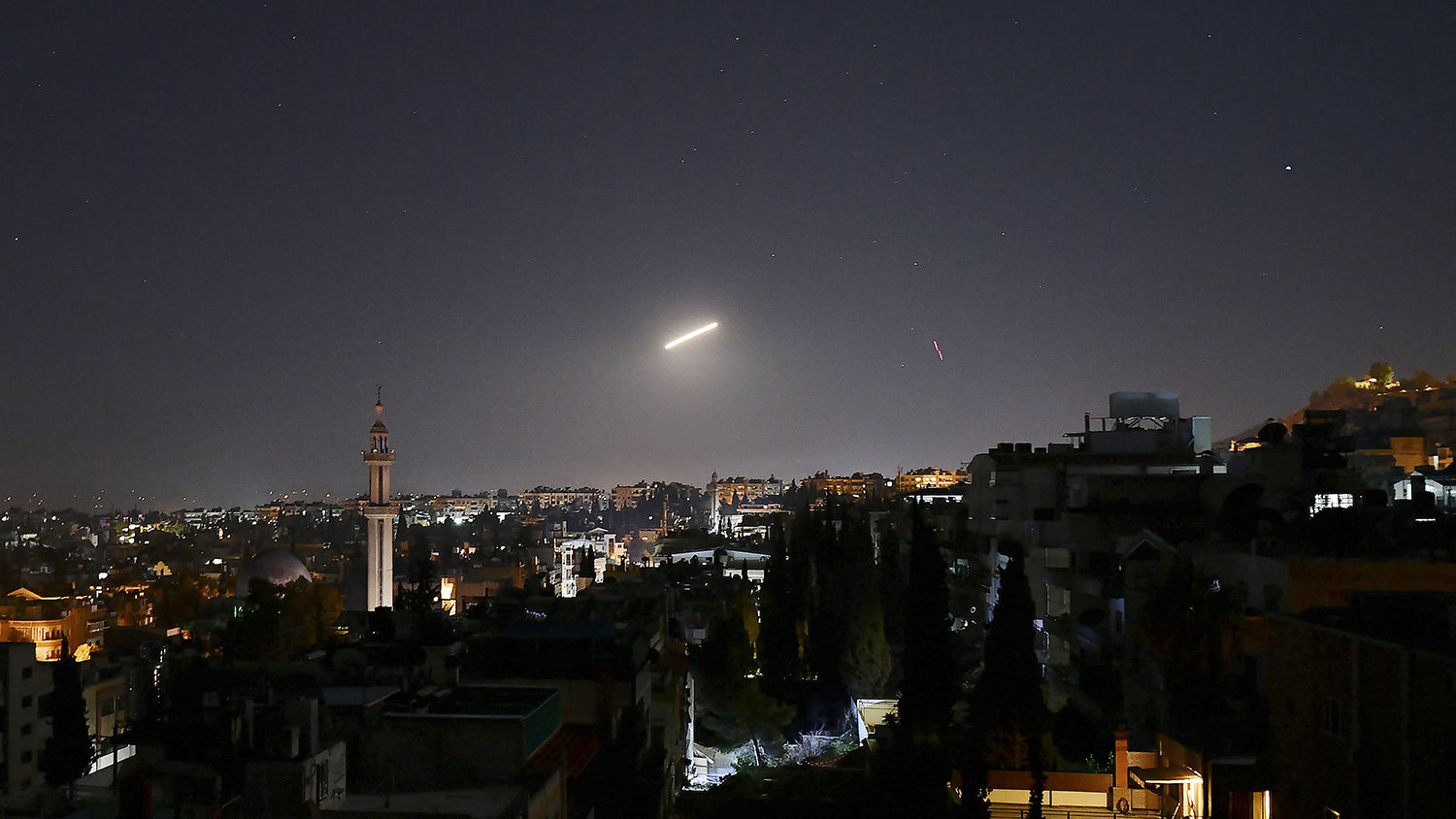 Syrian air defense missile is seen in the sky over Damascus on February 6.
XINHUA/AMMAR SAFARJALANI VIA GETTY IMAGES

Large explosions lit up the night sky and thundered through the dimly lit streets of Damascus on February 5. Israeli F-16 fighter jets fired eight air-to-ground missiles from the Golan Heights, which flew about 50 kilometers before striking several Iranian targets in and around the Syrian capital.

According to Israel’s Yedioth Ahronoth, the Israeli air strike killed at least 23 pro-Iran gunmen. The London-based Syrian Observatory for Human Rights said that at least three government Iranian positions were targeted in the attack.

Syria’s state-controlled Syrian Arab News Agency reported that the attacks came in two waves. The first wave at 1:12 a.m. and the second wave at 1:41 a.m. targeted “military positions in the suburbs of Damascus” and “the surroundings” of the “Damascus countryside.”

Iran has been pursuing its goal to control a vast corridor of land in Iraq, Syria and Lebanon to connect Iran to the Mediterranean Sea. This highway, warehouse and military base network has allowed Iran to supply its Lebanese proxy, Hezbollah, with rockets and armaments to support Syrian President Bashar Assad, to further entrench its forces in Syria, and to conduct attacks—such as launching missiles or drones—against Israeli soil.

The Israel Defense Forces and the Israeli Air Force have worked together to prevent Iran from further entrenching itself in this strategic land corridor. Since the Syrian civil war began in 2011, Israel has conducted hundreds of air strikes on Iranian targets in the nation. Nevertheless, Iran has managed to supply Hezbollah with hundreds of thousands of rockets, gain port access to the Mediterranean Sea in the Syrian city of Latakia, and build a large military base and missile storage warehouse at the Al-Bukamal border crossing between Iraq and Syria.

Keeping Iran out of Syria has failed. Now Bennett seeks to rid Syria of an Iranian military influence. He acknowledged Israel’s mistake in the past: “I don’t want to chase after convoys because for every convoy you hit, you miss five convoys, and slowly [Hezbollah] accumulates the critical mass of rockets that threaten us.” He recognizes the threat that Israel is facing and the prime importance of ridding Syria of Iran’s Quds Force.

Bennett admitted that Israel had been chasing Iran’s terrorist tentacles, but that policy is about to change. “We are in a process of switching to hurting the head of the octopus—Iran’s power. I am not necessarily talking about a full-blown war with Iran tomorrow; it is more similar to the Cold War between the Soviet Union and the United States, with the two regional powers Israel and Iran.”

Stopping short of a “full-blown war with Iran” and putting Israeli troops on the ground, Bennett concluded his speech by vowing to “continue to increase the strikes” against Iran “until we reach the ultimate goal: driving Iran out of Syria.”

Ever since United States President Donald Trump withdrew from the 2016 Iran nuclear deal and began reimposing sanctions on the Iranian regime, the Islamic Republic’s economy has tanked. The regime is barely staying afloat through trade with Iraq and China and by smuggling oil through Iraqi front companies. Reports indicate that due to its cash problems, Iran has been unable to finance its fighters in Syria as it has in the past.

This is significant because although Iran and Syria are close allies now, the Bible prophesies of a coming Iran-Syria divorce.

Psalm 83 describes an end-time alliance between moderate Arab nations and Germany. This exact alliance of nations has never occurred throughout history, so it must be prophetic.

Psalm 83:5 says, “For they have consulted together with one consent: they are confederate against thee.” The prophecy then goes on to list several ancient nations, which correspond with the modern nations of Lebanon, Jordan, Saudi Arabia and Turkey, that will align with Germany (biblical Assur, or Assyria). Verse 6 says that the Hagarenes will join this alliance.

In Bible prophecy, the Hagarenes refer to the modern-day nation of Syria. The Hagarenes were a semi-nomadic people who lived in the desert region between the lands of Gilead, Bashan and the Euphrates River, which is known today as Syria. They are mentioned as living in the same region from the 12th century b.c.e. during the time of King Saul (1 Chronicles 5:9-10) to 703 b.c.e., when they were referenced in Assyrian King Tiglath-Pileser iii’s Summary Inscription. The Psalm 83 prophecy identifies Syria, the modern descendants of the Hagarenes, as part of this Arab confederation. They are not allied with Iran. Instead, they are in this German-led alliance, along with some of Iran’s greatest enemies, like Saudi Arabia.

In “How the Syrian Crisis Will End,” published in September 2012, Watch Jerusalem editor in chief Gerald Flurry wrote, “What we are seeing right now in Syria is a major biblical prophecy in the process of being fulfilled! What happens in Syria will lead to mighty nations changing course and the foundations of this world being shaken!”

Whether by Israel or not, Iran will soon be forced out of Syria and Germany will step in to fill the void. The start of 2020 has seen a sharp rise in German activity in the Middle East, from supporting an anti-Iran naval mission to training Saudi military forces to hosting a diplomatic conference to resolve the Libyan civil war.

On January 8, the United States called on the European Union to take over the Middle East. America is on the way out and a German superpower is emerging to take its place. Watch for this dramatic change in the Middle East.

This switch in alliances, however, is not all good news for Israel. The nations listed in Psalm 83 come together to “cut them [Israel] off from being a nation; that the name of Israel may be no more in remembrance” (verse 4). This German-Arab alliance wants to blot out the name of Israel.

Though the Arabs have always had a hatred for the Jewish state, perhaps a future Israeli attack will make much of their land devastated leaving them anxious for retribution. However it all plays out, this alliance may not initially appear to be anti-Israeli, but will soon turn on the Jewish state. It will inflict a lot of suffering, but it is a crucial part of the Bible’s prophecies of end-time events.

For more information, read “How the Syrian Crisis Will End.”