United States Diplomatic Resurgence on Display Over ‘Deal of the Century’ 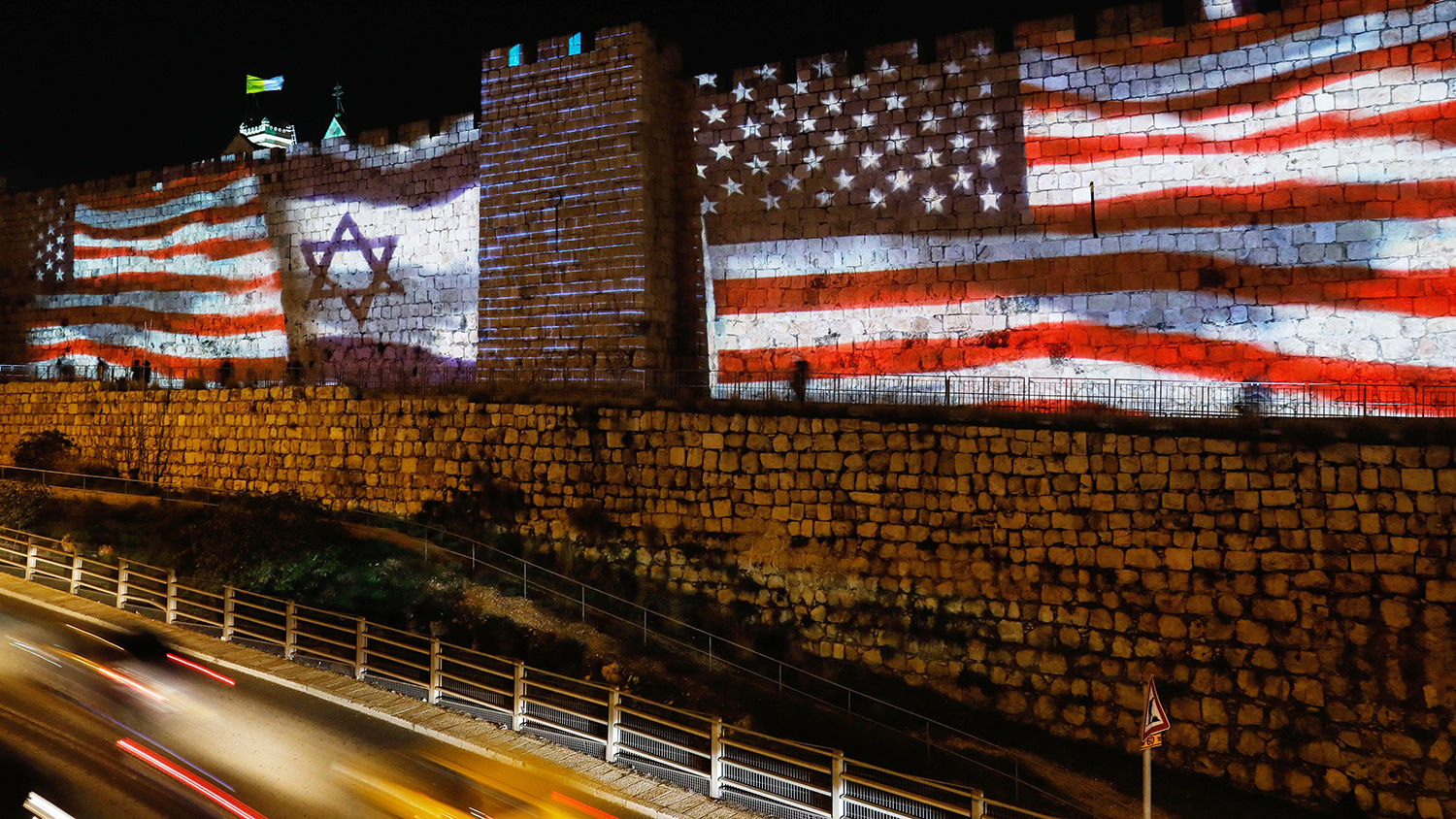 Israeli and U.S. flags are projected on the walls of the ramparts of Jerusalem’s Old City on February 11 to celebrate close ties between the two nations.
AHMAD GHARABLI/AFP VIA GETTY IMAGES

jerusalem
In December 2016, literally days before United States President Barack Obama left office, a vote came before the United Nations Security Council on a resolution passing judgment on the future borders of Israel and a Palestinian state. By virtue of a U.S. abstention, the resolution passed through the body and enshrined the 1967 lines as the basis for borders of the two states.

This meant that it was now the international community’s position that Israel was illegally occupying the Old City of Jerusalem as well as the West Bank, the heartland of biblical Israel. The critical abstention by the U.S. that allowed the anti-Israel resolution to pass was seen as a parting shot against the Jewish state from a notoriously hostile Obama administration.

Fast-forward to Tuesday this week, when the Security Council met once again, expecting to vote on another resolution about Israel and a future Palestinian state.

This time, the vote was meant to denounce U.S. President Donald Trump’s recently released “Vision for Peace,” which abrogates the 1967 lines from having any bearing on the borders between a future Palestinian state and Israel.

In Mr. Trump’s plan, Israel gets 30 percent of the West Bank, as well as sovereignty over Jerusalem. In effect, Trump’s plan obliterates the Obama-era unsc resolution.

On Tuesday, the unsc was meant to strike down Trump’s plan with the resounding ring of anti-Israel consensus that the UN has come to represent. Instead, the 15 members of the Security Council didn’t even get the chance to vote.

In the preceding days, the U.S. government worked overtime with member states to convince them to vote against the forthcoming resolution. It also successfully lobbied to change the language of the resolution to ensure that there was no mention of President Trump, the U.S. or even the “deal of the century.”

With the resolution gutted of its strong language, and with support lacking from other nations, the Palestinian delegation attempted to hide its embarrassment by deciding not to go forward with the vote.

All that Palestinian Authority leader Mahmoud Abbas could do was deliver the usual anti-Israel speech, as well as give a follow-up press conference to an enamored international press alongside former Israeli Prime Minister Ehud Olmert.

But there was no vote; no declaration of international condemnation of Mr. Trump’s plan. Instead, it was the Palestinians who looked isolated—a notable first for the UN.

This was a resounding defeat of the Palestinian Authority (and international anti-Trump sentiment), and a major victory for President Trump in his rollout of the peace deal.

As even the Guardian admitted, “[B]locking the vote is likely to be seen as a rare diplomatic success for the U.S. at the UN on the Middle East issue.”

Hints that the UN resolution wouldn’t have enough support should have been obvious based on a similar situation last week, this time with the European Union. According to sources, the officials of the 27-member body sought to issue a unanimous statement declaring broad opposition to the U.S. plan. However, many European nations refused to speak out against the plan, leading EU High Representative Josep Borel to issue his own statement of contempt of the deal.

In both cases, several European nations either like the Trump plan or were unwilling to break with President Trump over the deal.

But it is not just Europeans who are mute; several Arab states are showing signs of support for Trump’s deal.

This started with the highly unusual Arab presence in the White House for the deal’s announcement on January 28. Representatives of the United Arab Emirates, Oman and Bahrain were singularly called out by President Trump during the ceremony, indicating their support for the deal.

While there was the obligatory statement from the Arab League on February 1 expressing disapproval of the deal, the lack of significant follow-through by the individual Arab nations reveals a deepening alignment with the U.S. On February 9, Brig. Gen. Res. Yossi Kuperwasser characterized the Arab response to the deal this way:

They cannot say it out loudly in a forum like the Arab League, but the participation of some of them in the ceremony, their national leadership reactions, and their diplomatic messages are clear. Because they want the best for the Palestinians and for themselves, they actually support the plan at least as a basis for negotiations. The Sudan move that was not criticized by the pragmatists says it all. The Hashemite Kingdom of Jordan and the Arab Republic of Egypt are in a more sensitive situation but it seems that as long as Israel is coordinating its moves regarding the plan with the United States they will not harm their delicate relations with Israel.

The radicals are of course against the plan since they are against anything that strengthens the pragmatists and Israel. This explains Iran’s, Turkey’s and the Islamic State’s harsh reactions. They don’t care about the Palestinians and their well-being, they only care about their own imperial aspirations, which are going to be hampered if Israel is secure, makes peace with the Palestinians, and establishes normal relations with the pragmatic states.

As Kupperwasser relates, the Arab world is currently divided between those radical regimes pushing for their own regional hegemony, like Iran and Turkey, and the pragmatists, who don’t necessarily like the Jewish state but recognize the benefits of such a relationship in the face of the radical threat.

These pragmatic states, such as Egypt, Saudi Arabia, the U.A.E. and Jordan, recognize the need for U.S. support in the face of threats. This alignment is causing these nations to act far more favorable to the United States, opening the door for greater relations with Israel.

Faced with growing threats, these Arab states cannot afford to upset President Trump over a peace deal between Israel and the Palestinians. For example, Tunisia fired its ambassador to the UN, Moncef Baati, last week after he came together with Indonesia’s representative and drafted the Palestinian resolution. Tunisia’s president fired Baati because he was worried that support for the Palestinian Authority would damage his nation’s relations with the U.S., according to diplomatic sources.

One member of the Palestinian delegation to the UN confirmed this shift in Arab support toward Trump. “We are still in shock from the cold shoulder we received from Arab states, chief among them the Gulf emirates, Egypt and Saudi Arabia,” the source told Israel Hayom.

Put together, the retreat of the anti-Trump resolution at the unsc, the inability of the EU to reach its own consensus against the deal of the century, and the lack of Arab support for the Palestinian Authority all testify to a massive change in how the international community is treating the United States under President Trump.

As Watch Jerusalem editor in chief Gerald Flurry recently wrote, the deal of the century has literally no chance of being successful in the long run. Nevertheless, the lack of international condemnation against the deal highlights a separate and compelling trend—the resurgence of the United States under the leadership of President Trump.

“Donald Trump has proved himself willing to take a stand where others have not. It is quite something to behold him resisting these anti-American forces!” Mr. Flurry wrote in his 2018 article “Saving America From the Radical Left—Temporarily.” The prophecy of America’s temporary resurgence under the leadership of President Trump is detailed in Mr. Flurry’s free booklet Great Again.

This resurgence was on display at the United Nations this past week. And it is on display in the newfound respect nations have for the United States.

Clearly, many in the international community might not like President Trump’s personality or all of his pro-American flag-waving, but the events of the past week show that there aren’t too many who will go against him. At least not in the near future.

If you would like to understand more about the resurgence of the U.S. under President Trump and where it is leading, please take the time to read Mr. Flurry’s booklet Great Again.