A new study offers a peek into the rule of Jeroboam ii.
By Brent Nagtegaal • March 11, 2020 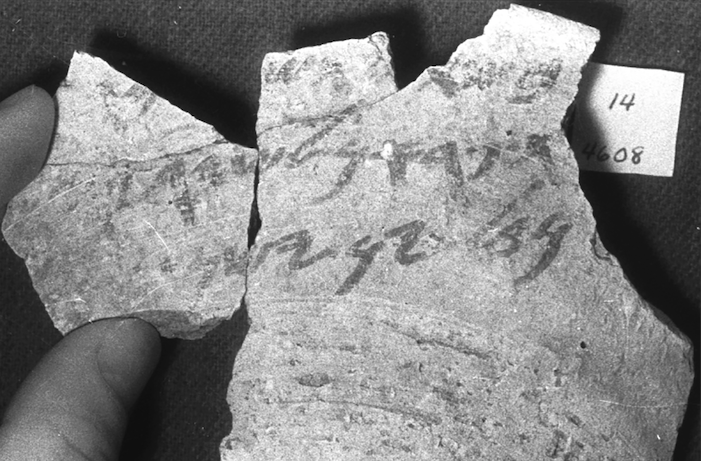 jerusalem
Excavations in 1910 at the ancient Israelite capital of Samaria yielded over 100 pieces of pottery covered with ink writing. Known today as the Samaria Ostraca, these ancient administrative documents record the receipt of wine and oil to Samaria.

A new study has emerged, analyzing the text on the various potsherds, which revealed that only two scribes were responsible for writing all of the documents. In response to the study, many media outlets implied that the limited number of scribes point to a low level of literacy in ancient Israel. One Times of Israel headline read: “Illiterate Israelites? Hi-tech review of ancient sherds suggests few scribes.”

Is this heavy-handed insinuation justified? What does the study really prove?

Samaria was the ancient capital of the northern tribes of Israel from the time of King Omri until the destruction of Israel by the Assyrian Empire. The ostraca—pieces of pottery with writing on them—were discovered in a fill underneath a building at the excavation site. They are some of the earliest examples of ancient Hebrew writing. Although the text on the shards is quite mundane, it does offer insight into the royal administration of the time.

After all these years, there were still many unanswered questions about the ostraca. The study featured in plos one journal sought to answer some of those questions. The study reads:

Despite many years of extensive research, several issues related to the Samaria corpus are still debated. In particular, it is not clear whether the ostraca were composed at various sites in the highlands around the capital and dispatched to Samaria along with the provisions mentioned in them. Or whether they were written in the capital, possibly when the shipments arrived. The former option would indicate dissemination of writing, at least in the administrative echelon of the kingdom of Israel, while the latter would provide evidence for the royal bureaucracy in the capital.

The new analysis of the text provides evidence to settle the debate between these two opposing theories. The researchers chose 39 of the best and most easily confirmed shards to be analyzed. Each text was run through an algorithm to analyze the style of writing. This algorithm has previously been tested on other ancient ostraca and numerous modern documents, with 95 percent accuracy. This algorithm determined that only two authors were responsible for writing the entire group of texts.

The study also determined that these two scribes were most likely operating inside the capital city of Samaria writing these documents to track the amount and origin of the incoming wine and oil.

When were these texts written? The ostraca themselves contain three regnal years: the 9th, the 10th and the 15th year. The only problem: None of them say which king the years refer to. However, the fact that there was a 15th year narrows down the possibilities.

According to the biblical account, correlated with Assyrian records, only five kings ruled in Samaria for periods of 15 years or longer (Ahab …; Jehu …; Jehoahaz …; Joash …; and Jeroboam ii …).

As the study shows, it is most likely Joash or Jeroboam ii because the style of writings is ancient Hebrew, rather than the proto-Canaanite script that still appears in the years of the earlier kings. “Judging from the prosperity of the kingdom, the latter option, is most plausible,” the study concluded.

Jeroboam ii ruled from 790 to 750 b.c.e. and reigned during the work of Amos and Hosea. It was a time of great affluence and religious revival. It wasn’t true religion but the false religion of Jeroboam i. The same false religion that the Prophet Amos condemned. In spite of this paganism, the borders of Israel expanded, and the people gained a false sense of security.

The ostraca testify to this growth as each year shows an increase in wealth over the last.

The most interesting detail in the study is that all of the texts were written by only two scribes, from the ninth year through the 15th. Since the documents show no sign of being categorized by region or material, the scribes worked concurrently in the capital, performing the same function at the same time for more than six years.

Virtually all of the media reporting of the study supposed that the existence of only two scribes indicates that Israel at the time was largely illiterate. But the raw evidence provides no support for this case at all. The number of scribes in charge of recording the wine and oil inventory in Samaria can give no indication of the general literacy of the nation. The writing of a scribe in Samaria cannot tell you of the literacy of a sheepherder in northern Manasseh or a gatherer of sycamore fruit in southern Ephraim.

It seems quite foolish to even posit such a hasty conclusion based upon the absence of evidence.

A quote from one of the professors in the study appeared everywhere. He said: “Our results, accompanied by other pieces of evidence, seem also to indicate a limited dispersion of literacy in Israel in the early eighth-century b.c.e.” But if you read through the study this is not a proven point.

On the one hand, we observe just two scribes within the large Samaria ink ostraca corpus of the flourishing northern kingdom’s capital, with very little supporting evidence of writing skills from other sites in the realm. This may hint that during this period literacy was, to some extent, restricted to the royal court.

It may hint? Hardly.

The general literacy of the nation is completely irrelevant to this discovery.

So yes, we need to be careful with conclusions …. At the same time, note the fact that in the first half of the eighth century we have northern (Israel) plaster literary inscriptions at Deir Alla (Jordan Valley, on the Jordanian side, facing Nablus—in the territory of the north at that time) and Kuntillet Ajrud. This shows the ability to compose literary texts as early as the time of Jeroboam ii, if not slightly before.

This narrative is pushed despite the lack of evidence because it is fashionable to belittle the accuracy of the biblical text. What this study actually does is establish that two palace officials were responsible for documenting the incoming stores of wine and oil to the capital city during the reign of King Jeroboam ii. A point that is clearly supported by the biblical description of his luxurious reign.

The Bible records remarkably little about Jeroboam ii, although he was Israel’s longest-reigning king, ruling for 41 years (circa 793–753 b.c.e.). Regarding his character, the book of Kings only says that “he departed not from all the sins of Jeroboam.” His namesake, Jeroboam i, had led the northern tribes to break away from the house of David nearly 150 years earlier.

Even though Jeroboam ii was wicked, God prophesied through the Prophet Jonah that He would have mercy on Israel and use Jeroboam ii to enlarge Israel’s boundaries in a way not seen since the reign of King Solomon. God blessed his reign to prevent Israel from being blotted out (2 Kings 14:27). But Israel refused to acknowledge God as the source of its wealth and peace, and it continued its pagan practices. The people credited their king and their military victories instead.

God saved the nation temporarily by the hand of Jeroboam, but soon after, He removed those blessings. Flush with cash, Israel took one last breath of the “good life” before descending into Assyrian captivity following Jeroboam’s death

Israel today is experiencing a resurgence in wealth and power. There are many parallels between the history of Jeroboam ii and what we see unfolding today. Amos warned that the wealth was gained by the mercy of God and not by the doings of any individual or king. Modern history is mirroring that history. For more information on this amazing subject read Watch Jerusalem managing editor Brad Macdonald’s article “A Prophesied Resurgence in Israel.”