Iran: The Source of Houthi Power 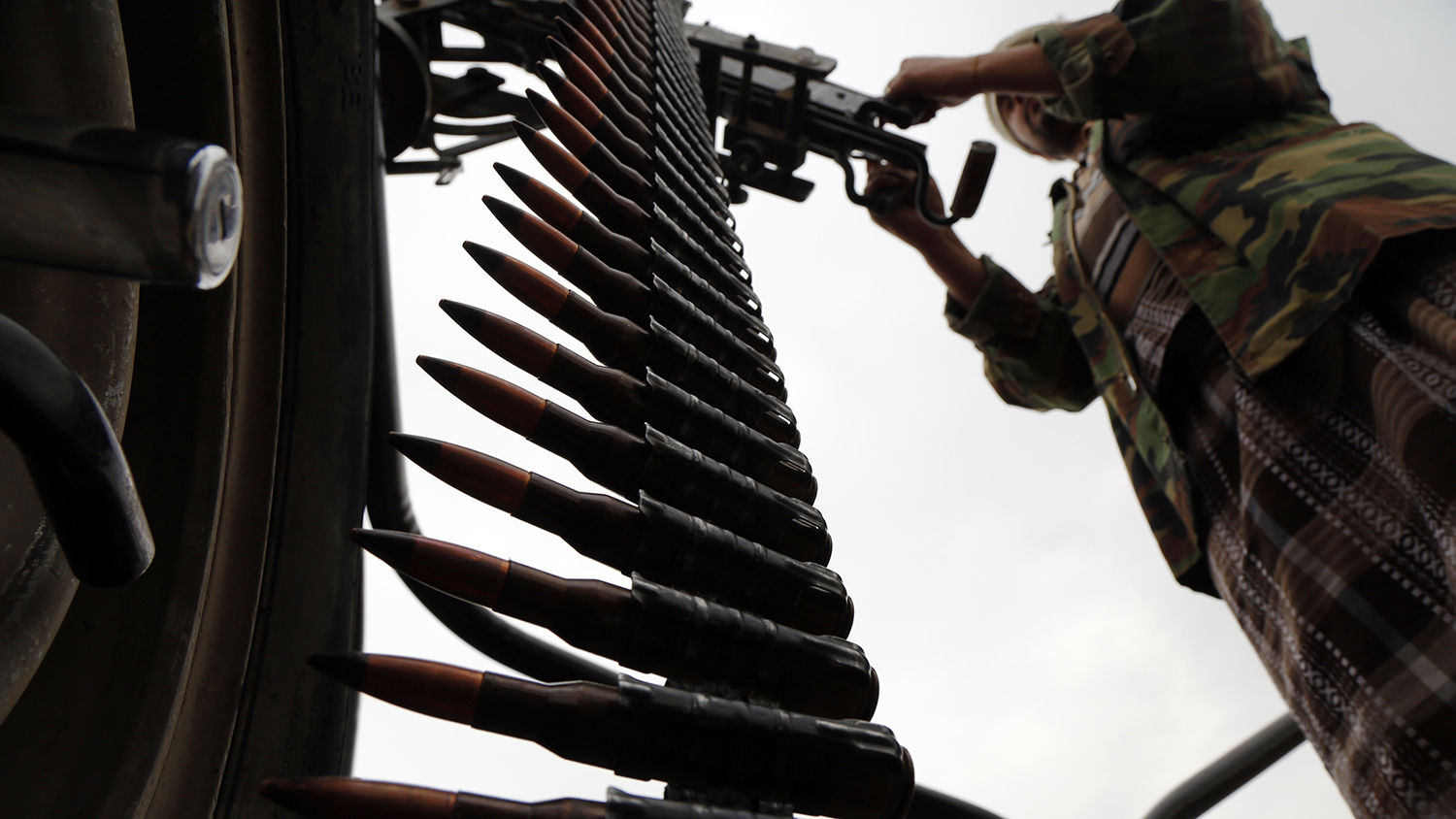 A Houthi loyalist on a military truck holds a weapon during a tribal gathering on Aug. 1, 2019, in Sana’a, Yemen.
MOHAMMED HAMOUD/GETTY IMAGES

The Iran-backed Houthi rebel group claimed on February 15 that it shot down a Tornado fighter jet belonging to Saudi Arabia. Houthi spokesman Yahya al-Saree said on Houthi-run Al-Masirah television that the jet was downed in the Al-Jawf governorate in northern Yemen by an “advanced surface-to-air missile.”

Since 2017, Houthi rebel forces have shown a significant rise in military capabilities. Its ballistic missiles are capable of traveling almost 1,300 kilometers before striking their target, its drones now carry explosive payloads, it has advanced sea mines to hinder travel through the nearby Bab el-Mandeb strait, and now the rebels may even have “advanced” surface-to-air missile batteries capable of shooting down Saudi jets.

This raises questions: Where are these technical advancements coming from? How could a group once dismissed as a “ragtag militia” comprised of shepherds and simple craftsmen now have such advanced military equipment?

The Houthi’s military power comes from one primary source: the Islamic Republic of Iran.

In 2017, an unnamed Iranian official told Reuters that Iran’s Islamic Revolutionary Guard Corps (irgc) held a meeting to discuss ways to “empower” the Houthi militia. At the meeting, the irgc “agreed to increase the amount of help, through training, arms and financial support.”

United Nations sanctions prevent Iran from openly exporting military equipment to the Houthi movement in Yemen. This has forced Iran to illegally smuggle the equipment, which makes the shipment process take even longer.

London-based Saudi newspaper Asharq al-Awsat reported on Aug. 13, 2019, that Iran summoned Saree and Houthi Foreign Minister Mohammed Abdel Salam Felita to Tehran where the Houthis were assigned a new terrorist mission in the Red Sea. Following the meeting in Tehran between irgc commanders and Saree and Felita, Houthi rebels threatened to use a new Iran-made air defense system.

This month’s downing of a Saudi jet could be the result of that advanced Iran-made air defense system given to the Houthis.

Not all shipments make it through. Several intercepted weapons shipments en route to Yemen in the Arabian Sea have yielded anti-tank guided missiles, munitions, rifles and rocket launchers.

While conducting maritime security missions in the Arabian Sea on February 9, the uss Normandy boarded a stateless traditional sailing vessel it caught smuggling a large cache of Iran-made weapons bound for the Houthis.

“Many of these weapons systems are identical” to those seized in a similar circumstance on Nov. 25, 2019, when the uss Forrest Sherman seized a vessel carrying 21 anti-tank guided missiles and five “near-fully assembled” surface-to-air missiles, the Central Command explained. “Those weapons were determined to be of Iranian origin and assessed to be destined for the Houthis in Yemen.”

U.S. Navy Capt. William Urban told reporters on February 19, “If the weapons were manufactured in Iran, then they came from Iran. … They are illicitly smuggled for a purpose, and that purpose is the spread of lethal assistance to the Houthis, to Iranian proxies.”

According to the Wall Street Journal, U.S. defense officials say that Houthi rebels receive “significant Iranian support” and have increased “the lethality and range of their systems.”

A Jan. 25, 2019, UN report to the Security Council stated that “in August 2018, a substantial consignment of assault rifles was seized by a warship of the United States of America from a boat heading toward the southern coast of Yemen,” likely from Iran. The UN report also stated that a small number of Yemeni companies were acting as front companies for Iran to “donate” fuel to the Houthi rebels.

In “Iranian Technology Transfers to Yemen,” Conflict Armament Research (car) found in March 2017 that “Iran continues to provide enhanced military capabilities to Houthi and Saleh-aligned forces.” The report concluded that Houthi drones are “imported, rather than designed or manufactured in Yemen,” and “produced by Iran’s [state-controlled] Aircraft Manufacturing Industrial Company.”

The February 2020 car report highlights the similarities between Houthi and Iranian drone and missile parts. In “Evolution of uavs [Unmanned Aerial Vehicles] Employed by Houthi Force in Yemen,” car found that while the Houthis previously relied solely on importing drones from Iran, they have recently begun building their own hybrids.

Because the drone frames are large and distinctly shaped, they are more prone to discovery. To work around this difficulty, the Houthis “continue to rely on smuggling smaller components, whose design and construction are increasingly sophisticated.” Iranian experts have taught the Houthis how to assemble the parts and fabricate the airframes.

The car report also found that some parts found in Houthi drones and missiles are “identical” to those found in Iranian drones and missiles. The analysts found the use of similar companies such as Germany’s W3 motors, Ireland’s Tillotson carbonators, Korea’s Hitec servomotors, Woer heat-shrink sleeves, and quality control stickers.

They also found that the Houthi Qasef-1 drones use a model V10 vertical gyroscope whose serial numbers were “close in proximity to an identical gyroscope found in an Iranian-made Abiabil-3.” The V10 gyroscope appeared to be “of the same make—yet not the same model”—as the V9 gyroscopes recovered from the wreckage of the Sept. 14, 2019, attack on the Aramco oil processing facility in Abqaiq, Saudi Arabia.

The report stated that according to drone experts familiar with the technology, “such vertical gyroscopes have not been observed in any uavs other than those manufactured by Iran.”

Because of its Twelver Shiism beliefs, the mullahs in Iran believe that they can hasten the arrival of their version of the Messiah by causing chaos and destruction. They do this through several means, primarily by exporting terrorism. Iran relentlessly supports the Houthi rebels for a very specific purpose: to aid it in causing destruction.

Yemen borders the Bab el-Mandeb, which National Interest calls the world’s most dangerous shipping lane. Roughly 4.8 million barrels of crude oil and other petroleum products passed through the strait per day in 2016, according to the U.S. Energy Information Administration. More than half of that trade sailed north into the Mediterranean Sea toward Europe and North America.

The Abqaiq attack caused oil prices to immediately surge by 20 percent, the largest jump in 28 years. Bloomberg called it “the single worst sudden disruption ever.” And that was only one facility. The damage Iran could cause by shutting down an entire shipping lane, such as the Bab el-Mandeb, is incalculably worse.

This is why Iran has consistently supported the Houthi rebels. By establishing the Houthis in Yemen and supplying them with air defense systems, ballistic missiles, drones and sea mines, Iran is slowly gaining the power to threaten the Bab el-Mandeb.

This is a trend Watch Jerusalem has been following for years. In April 2015, our editor in chief Gerald Flurry wrote, “The Houthi takeover in Yemen proves that Iran is implementing a bold strategy to control the vital sea lane from the Indian Ocean to the Mediterranean Sea. We need to understand the gravity of this new situation in Yemen!”

A prophecy in Daniel 11:40 says, “And at the time of the end shall the king of the south push at him ….” This is a prophecy for the time we are living in right now. Just before the Coming of the Messiah, a radical Islamic group of nations in the Middle East and Africa, led by the Islamic Republic of Iran, is prophesied to rise. This prophecy says that Iran will have a very pushy foreign policy as it supports terrorism and pushes to develop the nuclear bomb. Verses 42-43 show that Iran will virtually gain control of the Red Sea shipping lane.

In “Iran Gets a Stranglehold on the Middle East,” Mr. Flurry continued: “Now that Iran controls Yemen, it can virtually close or open this spigot on Middle East oil bound for Europe. And Europe is taking notice!”

In Djibouti—a small nation just 30 kilometers across the strait from Yemen—several different nations, such as China, France, Japan and the United States, have military bases to protect this shipping lane. Nevertheless, the Bible says that Iran will gain some form of control over the Red Sea. When it does, Europe will react with force.

After Iran pushes at Europe, Daniel 11:40 continues, “the king of the north shall come against him like a whirlwind, with chariots, and with horsemen, and with many ships; and he shall enter into the countries, and shall overflow and pass over.”

Europe and Iran are on a collision course. Soon, these two nations will clash in a terrifying world war, and Iran’s belligerence will finally be put to an end.

For more information about this coming clash, read the November-December Watch Jerusalem cover story, “How Iran Will Be Conquered,” by Gerald Flurry.