How long will this temporary Arab-Israeli alliance last?
By Brent Nagtegaal and Warren Reinsch • February 27 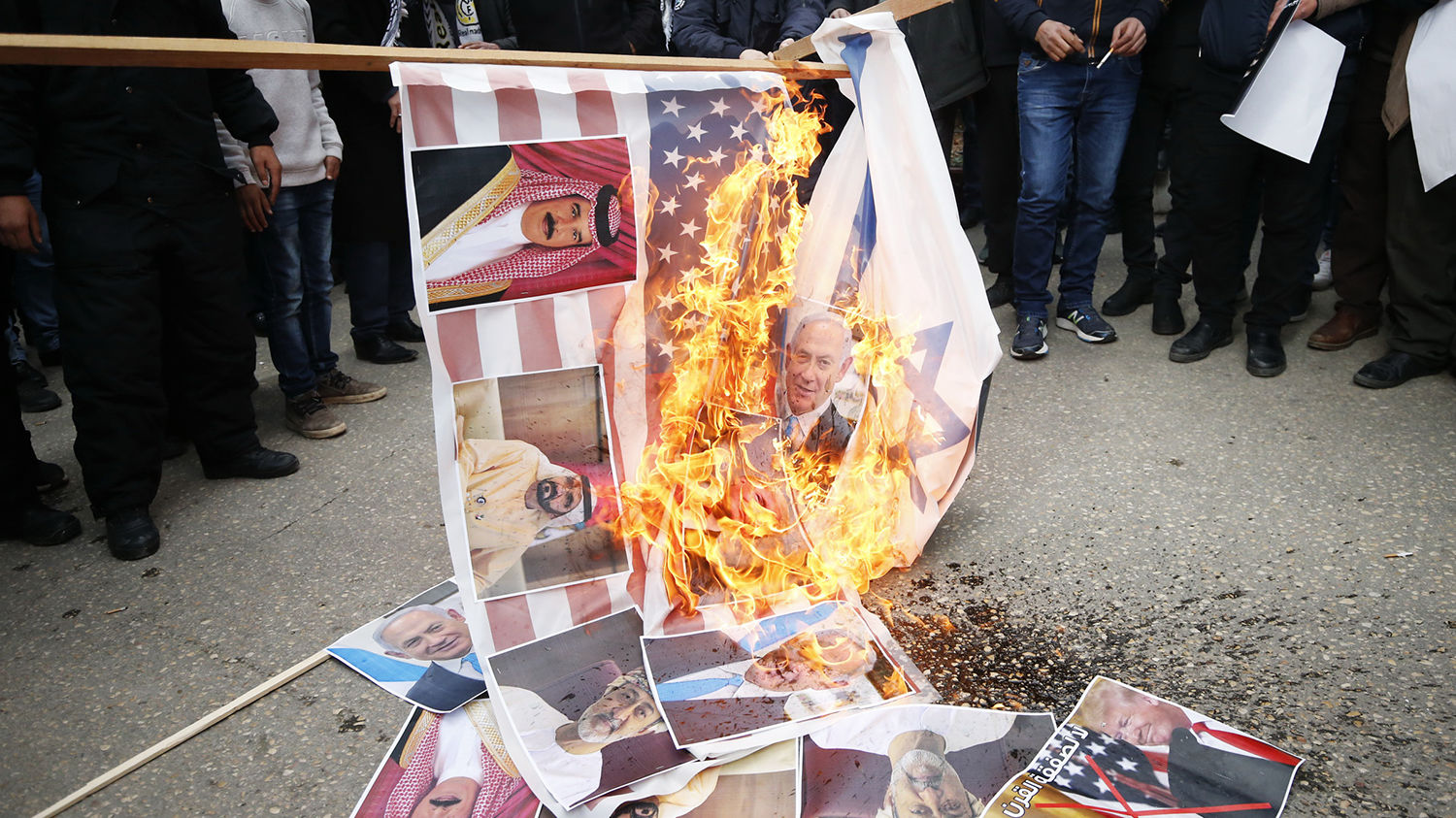 Palestinian Fatah supporters set U.S. and Israeli flags on fire, along with portraits of U.S. President Donald Trump, Israeli Prime Minister Benjamin Netanyahu and Gulf Arab leaders, during a protest against the peace plan proposal in the Palestinian city of Hebron in the West Bank on January 30.
HAZEM BADER/AFP VIA GETTY IMAGES

Since the creation of the Jewish State of Israel, relations between Arabs and Jews in the Middle East have been fraught with violence. However, a recent trend shows that Arab-Israeli relations are warming.

On February 16, the first Israeli flight flew over Sudanese territory on its way to West Africa as a result of a meeting between the two nations’ leaders on February 3. According to several sources, Saudi Arabia and other Persian Gulf nations may even sign a nonaggression pact, or truce, with Israel.

Reconciliation with the Arab world would be a crowning achievement for Prime Minister Benjamin Netanyahu; however, there is a hidden danger behind this new alliance.

In “The History of Non-aggression Pacts in Islam,” Harold Rhode, who has a Ph.D. in Ottoman history and served 28 years as the Islamic Cultural Affairs Adviser to the United States Department of Defense, explained that the success of these agreements is dependent on the strength of the leaders who signed the agreement.

More importantly, he said, these types of “nonaggression” or “truce” agreements that the Muslim nations make are only good for as long as they are viewed as valuable.

Rhode explained that such agreements are modeled after the Treaty of Hudaybiyyah. In c.e. 628, the Prophet Mohammed made a peace treaty with the Quraysh tribe of Mecca because he was unable to defeat them. The agreement was supposed to last 10 years; however, when Mohammed had sufficiently rearmed, the pact was no longer in his interest. After two years, Mohammed “reneged on the agreement, attacked his enemies, and defeated them.”

According to Rhode, this type of temporary “non-aggression” or “truce” agreement with Israel is currently “in their interest” only as a counter to their shared “existential enemy”: Iran. Right now, there is a push for an agreement because of Iran’s aggressive and belligerent behavior. He continued:

What would happen, for example, if the Iranian regime collapsed and the new government in Iran no longer threatened the Sunni Arab regimes? Would Israel and these Arab countries still share common interests? Would these agreements still hold?

History shows that it would not. Furthermore, biblical prophecy also shows that once the Iranian threat is removed, Israel’s newfound Arab friends will turn on them.

At the 1949 Rhodes conference, the Arabs insisted on calling the treaties “armistice agreements” and “armistice lines,” instead of peace agreements and borders. The Arabs were determined not to recognize the permanency of Israeli sovereignty.

Speaking on Palestinian television on Aug. 5, 1997, just two years after signing the Oslo Accords, Arafat said, “It is important that we organize our homes and our movement so that we can more and more and more endure the coming battle, which we shall initiate. We must say these things because great battles lie before us. … We are marching together to Jerusalem, Jerusalem, Jerusalem.”

Statements like this show, as Glick writes, “that he and the Palestinians were not interested in making peace with Israel.” Three years later, the Second Intifada ignited, resulting in more than 4,000 lives being lost in the back-and-forth violence as Palestinian militias fought to regain East Jerusalem.

History shows that agreements by Muslims with non-Muslims are only temporary. But much more authoritative than history, Bible prophecy reveals this hidden danger behind these agreements with the Arab world.

The Bible says that these Arab states Israel is currently normalizing ties with actually belong to a confederacy of nations that will lead to Israel’s destruction after the Iranian regime has been destroyed.

Daniel 11:40 says, “And at the time of the end shall the king of the south [radical Islam, led by Iran] push at him: and the king of the north [the German-led European Union] shall come against him like a whirlwind, with chariots, and with horsemen, and with many ships; and he shall enter into the countries, and shall overflow and pass over.”

This scripture prophesies of Iran’s destruction at the hands of Germany.

Psalm 83 says that after Iran’s destruction, a confederacy of moderate Arab nations—Lebanon, Jordan, Saudi Arabia, Syria, the United Arab Emirates and the Palestinians—will align with Germany and take “crafty counsel” against Israel. Gesenius’ Hebrew-Chaldee Lexicon says crafty means “to be cunning” and “spiteful.”

Behind the scenes, these Arab nations may have a relationship with Israel, but they are going to break that relationship leading to Israel’s destruction.

Verse 4 says, “They have said, Come, and let us cut them off from being a nation; that the name of Israel may be no more in remembrance.” These Arab nations have had an underlying hatred for the State of Israel since its independence in May 1948. That hatred has not gone away, but rather, has taken a back seat to a more dangerous threat.

These types of deals Israel is making with the Arab world will only last as long as the Iranian threat exists. Once Iran is removed, there is no guarantee of security from these deals. Once Iran is destroyed and these Arab nations unite against Israel, Jerusalem will once again find itself under attack.

For more information, request your free copy of Jerusalem in Prophecy, by Watch Jerusalem editor in chief Gerald Flurry.