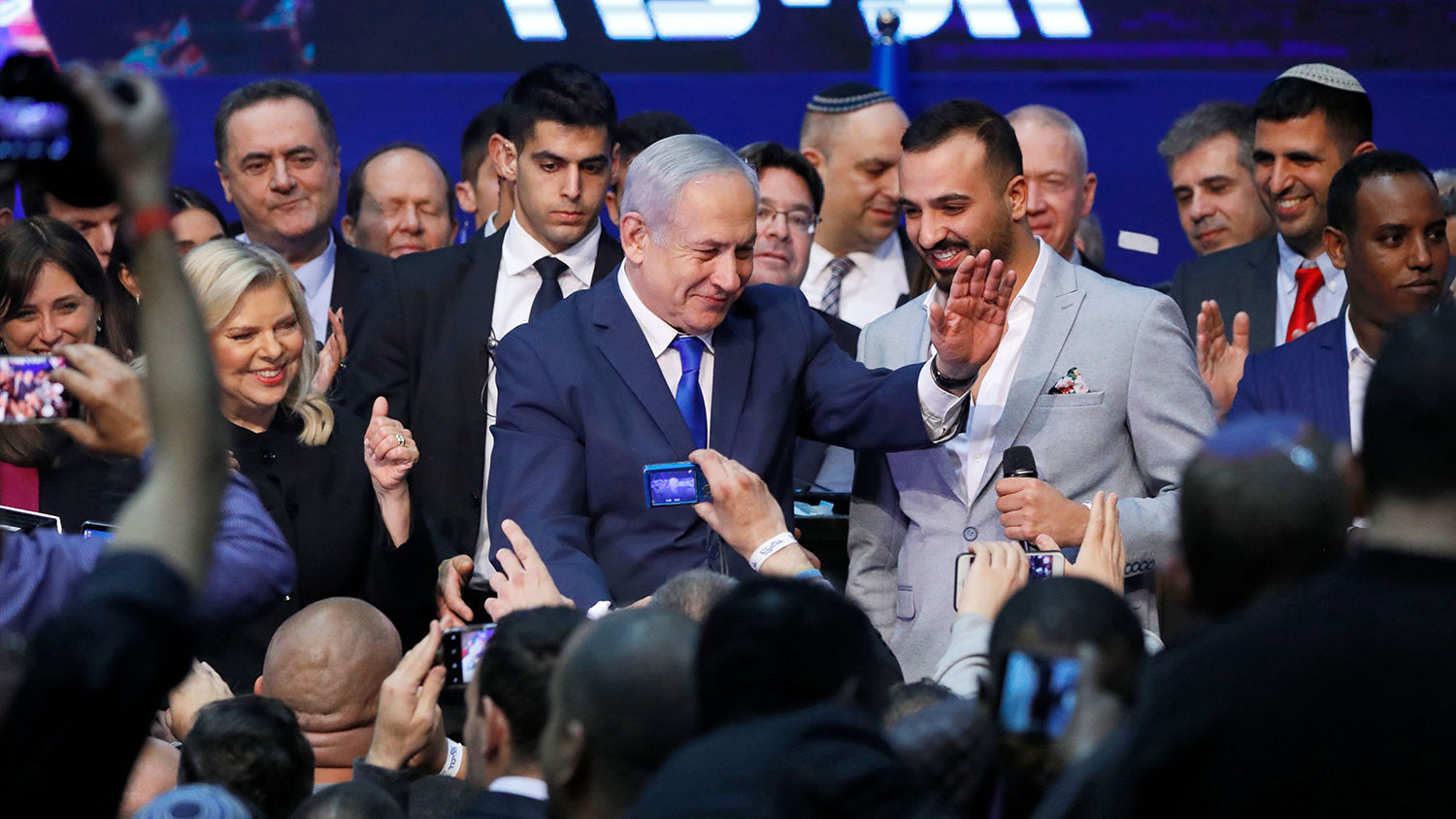 jerusalem
“This is a night of a huge victory for the Likud,” stated Prime Minister Benjamin Netanyahu after he took to the stage in Tel Aviv early Tuesday morning to declare victory in Israel’s unprecedented third election.

Hours earlier, exit polls showed Likud leading chief rival Benny Gantz’s Blue and White party by five seats in the Knesset: 36 to 32. The result is a dramatic swing from the September vote in which Likud lost to Blue and White 33 to 32. In that case, both Gantz and Netanyahu were unable to bring together a majority coalition in the 120-seat Knesset, necessitating the third election.

In Monday’s election, Netanyahu’s right-wing party fell just short of reaching the 61-seat majority. However, it’s anticipated that over the next few days Netanyahu will be able to cobble together the needed seats with defectors from the losing party or some other way. Israelis will largely forgive the defectors if it will prevent a fourth election.

While the final results will not be in for a couple of days, 95 percent of the vote has been counted and largely matches what exit polls predicted.

‘Victory Against All Odds’

“I remember our first victory in 1996 was historic, but this time is even sweeter because it is a victory against all odds,” Netanyahu continued in his speech. “Our rivals said the Netanyahu era is over, but together we turned it around, we made lemonade out of lemons.”

With no sign of fatigue, the 70-year-old fought a tireless campaign (his ninth), outworking his opponents by attending countless rallies and spending hours on live social media throughout the day to encourage his supporters to come out and vote.

And vote they did.

Almost 30 percent of them voted for Likud, its highest share of votes in party history.

Mati Tuchfeld summarized Netanyahu’s victory in Israel Hayom, writing, “This is an almost unprecedented personal coup—a comeback the like of which Israeli politics has never seen. Remember, this isn’t some shiny new candidate who managed to attract a large following, but the longest-serving prime minister in Israeli history who has reinvented himself.”

The Netanyahu victory is made even sweeter considering the ongoing battles by Israel’s legal fraternity to dethrone the leader. Netanyahu has been indicted by Israel’s Attorney General for bribery and other crimes with the trial due to start in two weeks. Borrowing a term used by United States President Donald Trump, Netanyahu has called the case a “witch hunt” to remove him from power.

The vote seems to confirm that many Israelis are in agreement.

Israelis went to the voting booth fully informed of the charges against Netanyahu, and they elected him anyway. Israeli commentator Caroline Glick wrote about the victory over the judiciary, posting on Facebook:

The biggest loser of today’s elections in Israel is the legal junta. Members of the junta, led by Attorney General Avichai Mandelblit have been engaged in a rolling coup, not just against Prime Minister Netanyahu, but against the sovereignty of the public.

For a generation, the self-appointed justices and prosecutors have run roughshod over elected officials, the public, the Knesset, the government with politicized criminal probes, cancellation of laws, blockage of bills. With Bibi’s indictments, on crimes that simply don’t exist in the legal code, they thought they completed their seizure of power.

But the public said no.

Although the prime minister says he intends to fight the attorney general in court, Israeli law also states that, as prime minister, Netanyahu can continue to serve even while indicted. While the courts will likely continue to hound Netanyahu, the election shows that the will of the people is with its prime minister.

“There is nothing like the citizens of Israel,” stated Netanyahu in his victory speech. “Israeli citizens trust us because they know that we have brought the best decade in Israeli history.”

By most metrics, Israel’s economy has gotten stronger over the past decade. Although it often faces skirmishes with terrorists, fewer Israelis have been killed in the past decade than any decade in its history. And Israel is now on the verge of a revolution in its relationships with Arab states. And since the last elections in September, Israel has now become a net energy exporter for the first time in history.

Also critical to Netanyahu’s victory was the close relationship he shares with President Trump. While most nations disapprove of the American president, a January poll indicated that a massive 71 percent of Israelis support Mr. Trump. Israel and the United States have often enjoyed close ties, but never has the relationship been warmer under Netanyahu’s watch.

Under Netanyahu’s stewardship, President Trump has moved the American Embassy from Tel Aviv to Jerusalem, declared the Golan Heights sovereign Israel territory, and increased pressure on Iran—Israel’s existential enemy in the region—by exiting the nuclear deal.

Most importantly since the last election, Prime Minister Netanyahu and President Trump held a joint press conference in the White House announcing that the president backs a unilateral Israeli annexation of most of East Jerusalem and 30 percent of the West Bank almost immediately. While there are negative aspects to the deal from Israel’s perspective, the joint announcement symbolized the brotherly bond between the two leaders.

Combining all these achievements it is easy to see why many in Israel chose to continue with Netanyahu rather than experiment with a party whose main argument seemed to be “anyone but Bibi.”

It’s clear that Israel is in the midst of a stunning resurgence guided largely by the hand of Netanyahu. This is a trend that largely mirrors what is taking place in the United States under President Trump.

And it is a trend that actually has precedent in ancient biblical times as well. This shared resurgence in the U.S. and Israel parallels a period of economic partnership and collaboration in the ancient kingdoms of Israel and Judah. Back then, the resurgence took place under King Jeroboam ii of Israel and King Uzziah of Judah.

How does this history connect to today?

For more than three years, Watch Jerusalem editor in chief Gerald Flurry has explained that President Donald Trump is an end-time type of Jeroboam ii. This conclusion is based on an end-time prophecy in Amos 7 that specifically forecasts the emergence in Israel (modern-day America and Britain) of a modern Jeroboam. “God is telling us we have now entered the time frame of Amos chapter 7,” Mr. Flurry writes in his booklet Great Again.

This prophecy has been dramatically fulfilled! Like his ancient predecessor, President Trump has presided over a stunning national resurgence.

Is it possible this same resurgence is taking place in Israel—biblical Judah—as well, just like it did in the eighth century b.c.e under King Uzziah?

Israel is indeed thriving under Prime Minister Netanyahu. But how long will it last?

To answer that question and explore the interesting parallels between our time today and eighth-century b.c.e. Judah, please take the time to read the cover story of the November-December 2019 issue of our Watch Jerusalem magazine, “A Prophesied Resurgence in Israel.”