Could Millions of Syrian Refugees Hasten the Rise of a European Military? 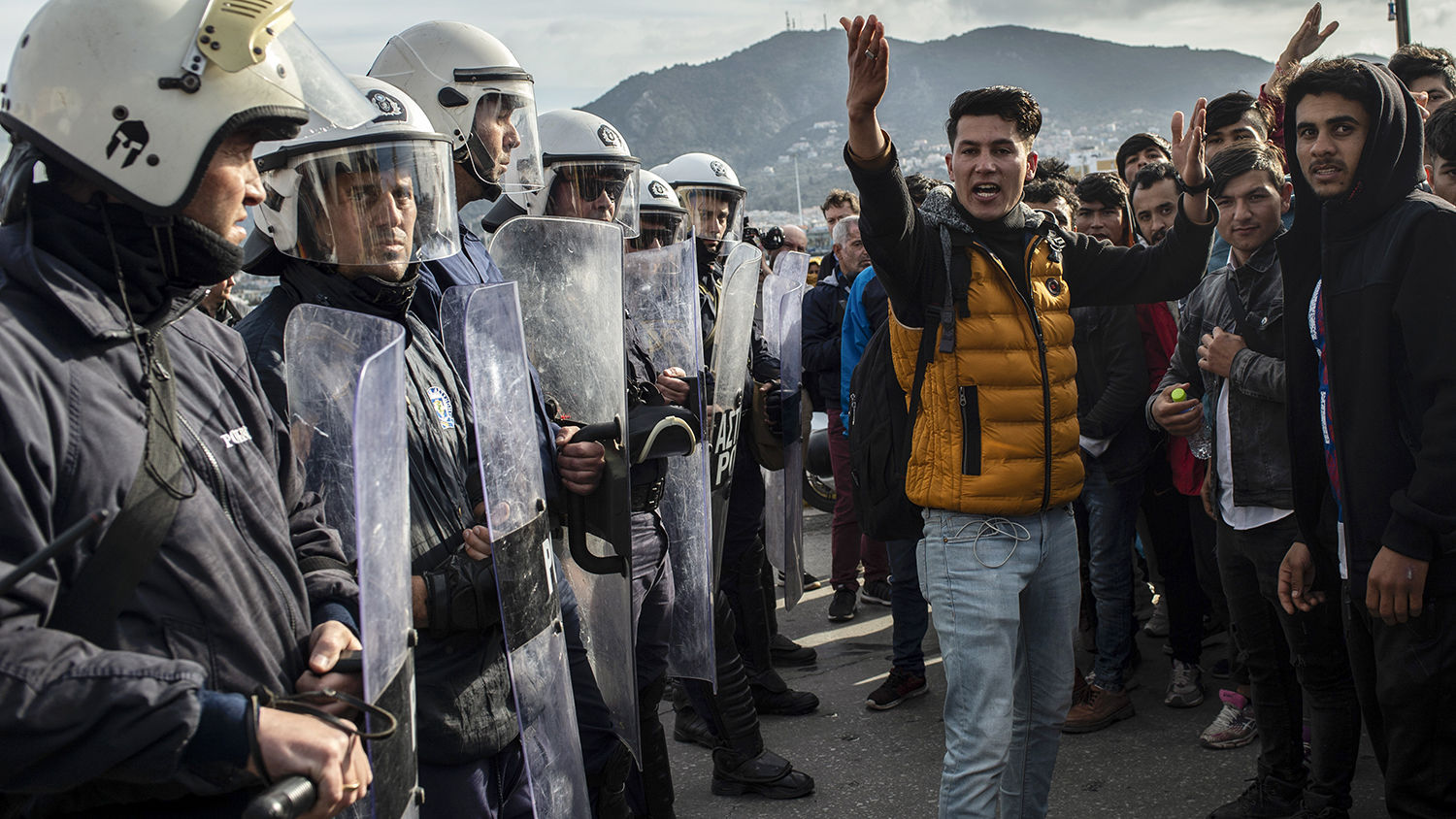 Migrants block a road outside the port of Lesbos in Greece on March 3 amid a migration surge from neighboring Turkey after it opened its borders to thousands of refugees trying to reach Europe.
ANGELOS TZORTZINIS/AFP VIA GETTY IMAGES

Turkish President Recep Tayyip Erdoğan warned Europe on Monday that “millions” of migrants would soon flood into the European Union after Turkey opened its borders and gave the green light for refugees on February 28, according to France24.

“We don’t want this money,” said Erdoğan, rejecting the EU’s €1 billion offer (us$1.1 billion) to deal with the refugees, adding to a €6 billion deal in 2016. Erdoğan’s office said that is it now time for Europe to take its “fair share of the burden.”

German Chancellor Angela Merkel responded by calling Turkey’s move “unacceptable.” Greece immediately responded by barring entrance, denying asylum, and increasing the frequency of border patrols. Greece says that about 10,000 refugees have massed at the border; however, Erdoğan claims the number is actually in the “hundreds of thousands.”

Clashes have broken out along the border between refugees and the Greek police. Turkey accused Greece of killing two migrants. According to France24, a Turkish official shared a video showing a boat of migrants being fired upon by the Greek Coast Guard. Greece has also used tear gas in an attempt to disperse the migrant masses along its shared border with Turkey.

“Those who seek to test Europe’s unity will be disappointed.”

The EU has pledged millions of euros and border guards to help Greece stop migrants crossing its border from Turkey. pic.twitter.com/cL5nw4OiiP

Turkey is already saturated with Syrian immigrants; 3.6 million Syrian refugees have made their home there since the civil war began in 2011. However, Turkey has been refusing to allow more refugees in. Instead, Turkey has deployed convoys of military equipment and thousands of troops to protect the Idlib province—the last remaining rebel stronghold and the last “safe” location in Syria from Syrian President Bashar Assad’s forces. Hundreds of thousands, perhaps even more than a million, refugees are camped throughout the Idlib province seeking refuge, carrying signs with slogans like “From Idlib to Berlin.”

Close to 948,000 Syrian migrants have been displaced since December alone when Syria renewed its offensive on the Idlib province. Assad is still working to gain control of all of Syria’s territory. But he can’t do it alone; he relies on Russia for support. Russian President Vladimir Putin has backed and supported Assad’s move to reconquer Syria’s territory primarily by providing aerial support. The two forces have worked in tandem to restore the government’s control over Syria.

Since the Syrian crisis began, over 400,000 people have been killed and several million displaced. This is primarily because of how Assad and Putin have led their offensive. With backing from Russian air strikes, Syrian artillery have bombarded towns and cities, first targeting hospitals and schools and essentially flattening the city until the majority of the inhabitants have been forced to flee. Then the Syrian Army moves in and takes control.

As a result, Syria has become the world’s worst humanitarian crisis.

According to a 2018 Pew Poll, 1 million Syrian refugees have already migrated into Europe, with the largest concentration in Germany, which hosts more than half a million displaced Syrians. The migrant crisis has been crippling Europe’s economies, specifically Germany, as they seek to find employment, food and shelter for 3.6 million Syrian refugees.

Turkey cannot absorb any more migrants; neither can Europe. Erdoğan’s decision to open the border for millions of refugees to flood into Europe is about to make Europe’s migrant crisis a whole lot worse.

Since the Syrian crisis began, we have closely followed the events, observing how they affect Europe. In our Trend article “Europe’s Push Toward a Unified Military,” we explained five factors pushing Europe to unite and form a combined military force.

1) Brexit. “Britain’s veto has prevented any meaningful progress toward a European military,” we wrote. British Prime Minister Boris Johnson made Brexit his goal. On January 31, Parliament ratified the withdrawal agreement. Now that the United Kingdom is no longer part of the EU’s political bodies or institutions, Europe is free to act as it sees fit.

2) The migrant crisis. The Schengen Area, comprised of 26 European nations, has removed passport requirements and other border controls, making travel quick and simple. However, as we wrote, “These nations share a border, but do not currently share any means of protecting that border. It is clear that a weakness in the border of one state affects the whole area.” Once the millions of Syrian refugees enter into one nation in the Schengen Area, they can freely travel between the other 25 nations as well. This is partially why Greece is putting up such a fight. Without a unified European military, can Greek police hold off millions of refugees alone?

3) Terrorism. Mixed within the millions of Syrian migrants in Idlib and those seeking entrance into Europe are thousands of al Qaeda-linked terrorists. On February 12, TheHill wrote, “Recent insights on Syrian refugees reveal unique vulnerabilities—most notably, exploitation by terrorist or other violent extremist organizations who can easily exploit, recruit and mobilize downtrodden people whose countries seem indifferent to their exodus.”

According to Europol’s European Union Terrorism Situation and Trend Report 2019, 13 people were killed and 46 were injured in seven terrorist attack on EU soil in 2018, a decrease from the previous year. The EU reported 16 thwarted jihadist terrorist attacks that year, and “the threat level across the EU remains high.” With an influx of millions of migrants, and likely thousands of terrorists, the number of attacks would logically increase—something Europe obviously does not want.

4) The withdrawal of America. Because of America’s security guarantees, the EU hasn’t needed a military. However, America is in retreat. America has turned inward and is slowly retreating from the world scene. Its recent “peace” deal with the Taliban was a “face-saving” attempt to finally withdraw its 14,000 troops from Afghanistan. President Trump even called on nato to become “more involved” in the Middle East, with the end goal being America’s retreat.

America’s withdrawal leaves behind a large power vacuum—and one nation in particular is working to fill the void.

5) The rise of Russia. As President Trump talks about leaving Syria, Russia is looking to step up its involvement. One of the primary reasons Russia is working in Syria is to demonstrate that it is a first-rate power capable of carrying out its will outside of its borders. Russia is working to show that its military intervention is what has kept the Assad regime in control.

As Russia gains more control and influence, however, fear of Russian aggression is building in Europe. The more involved Russia becomes, the more the EU feels the need to form a unified military to counter Russia.

The majority of those factors are at play in the Syrian crisis.

On March 3, the Turkish Embassy told EU Observer that Turkey would keep allowing the Syrian refugees to migrate into Greece “until the EU and the member states remember their unfulfilled commitments” and “show willingness to do what is necessary in addressing the root causes of sufferings in Idlib.” The Turkish Embassy also pushed the EU to establish a “safe zone” in Idlib where the Syrian migrants could live. Doing so would require standing up to Syria, and to Russia, as long as it supports the Assad regime.

Turkey doesn’t want more money to deal with the crisis; it wants European intervention—and it’s about to get it.

Psalm 83 is a prophecy about a confederation of moderate Arab nations aligned with a unified, German-led European military superpower. While Europe is not there yet, we can see it being pushed in that direction.

Verses 6-8 list who will be in that alliance: “The tabernacles of Edom, and the Ishmaelites; of Moab, and the Hagarenes; Gebal, and Ammon, and Amalek; the Philistines with the inhabitants of Tyre; Assur also is joined with them ….”

The UK is out. America is in retreat. Millions of migrants and thousands of terrorists threaten Europe’s stability. Russia is on the rise. And Turkey is pleading for Europe to take a stand. As the pressure intensifies and the crisis continues to worsen, watch for Europe to form a unified military and put an end to the Syrian crisis.

For more information, please read our sister-site Trend articles “Europe’s Push Toward a Unified Military” and “An Alliance Between Arab Nations and Europe.”