Was the attack due to warming ties with Israel?
By Warren Reinsch • March 13 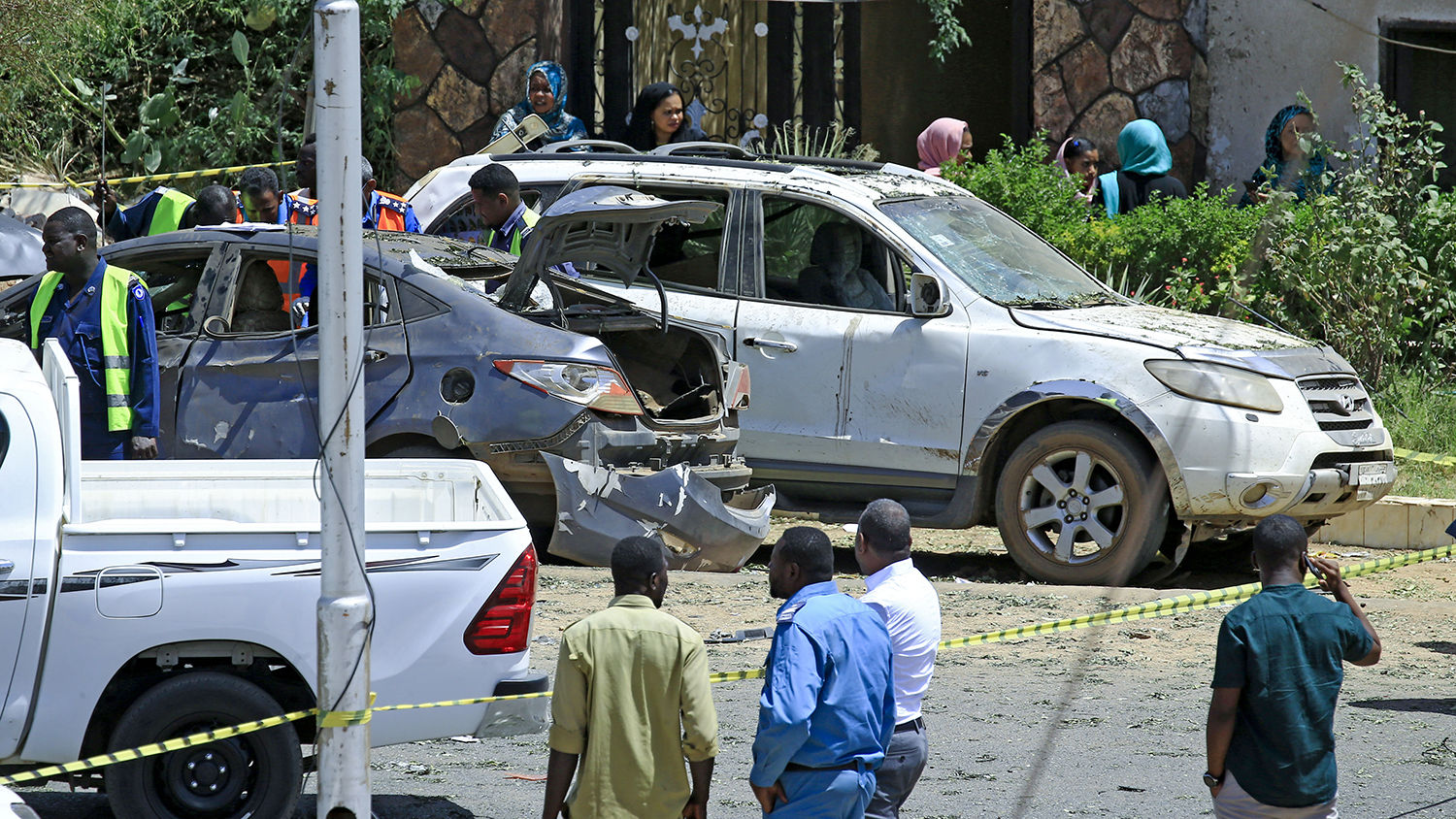 Sudanese rescue teams and security forces gather next to damaged vehicles at the site of an assassination attempt against Sudanese Prime Minister Hamdok in the capital Khartoum on March 9.
ASHRAF SHAZLY/AFP VIA GETTY IMAGES

According to state television, a car bomb exploded as the premier’s convoy drove by; however, state radio said the convoy was hit by a rocket-propelled grenade. One witness told Reuters, “I saw the moment of the explosion and the strike, and the strike came from a high building.”

The explosion was followed by several rounds of gunfire targeting the convoy. Generally, traffic police drive through the streets ensuring that they are clear of nearby vehicles, with the convoy staying a safe distance behind.

This has raised questions regarding the security forces and whether they can be trusted, as some even believe the attack may have been coordinated from within. Displeased with the direction of the transitional government, several soldiers within the intelligence branch of the armed forces mutinied last month after their unit was disbanded. According to The EastAfrican, however, the official statement from Information Minister Faisal Mohammad Saleh did not link the attack to the mutiny.

After the attack, the prime minister assured the Sudanese people, “I am well and completely healthy.” He continued to work from his office. No deaths have been reported as a result of the attack.

I would like to assure the people of Sudan that I am safe and in good shape. Rest assured that what happened today will not stand in the way of our transition, instead it is an additional push to the wheel of change in Sudan. pic.twitter.com/zeC2A4k2N0

Ever since he was appointed by the Sovereignty Council of Sudan in August 2019, Hamdok has been trying to bring Sudan away from the “old regime” of Omar al-Bashir and its ties to the Muslim Brotherhood terrorist organization. Hamdok has been working tirelessly to lead Sudan down the “path to democracy” and away from its dictatorial past. This has led to several stark differences in Sudan’s domestic and foreign policy, most of which have been met with support from the Sudanese people. However, a recent meeting with Israel was met with significant internal backlash.

Brig. Gen. Abdel Fattah al-Burham, chairman of Sudan’s Transitional Sovereignty Council, met with Israeli Prime Minister Benjamin Netanyahu on February 3 in Entebbe, Uganda. This historic meeting was a first for both nations as they mutually decided to normalize relations.

Sudan has historically been one of the most hostile nations toward Israel. After the meeting, Satie Al-Hajj, a leader in the Forces for Freedom and Change alliance, which forms part of the coalition government, condemned the normalizing of relations with Israel. The alliance called the meeting “harmful” to the nation and claimed it was not informed that the meeting was going to take place. However, General Buhan said he had notified the prime minister two days prior to the meeting. A portion of the public also demonstrated, expressing anger against the meeting and frustration with the leaders of the government.

While a direct tie is yet to be found, the timing of the attempted assassination of Sudan’s prime minister, following the groundbreaking meeting with Israel, is interesting, especially considering the region’s history.

This wouldn’t be the first time such a scenario has played out. In 1977, Egyptian President Anwar Sadat reached out to Israeli Prime Minister Menachem Begin in hopes of normalizing and strengthening diplomatic relations between the two nations. Sadat became the first Egyptian president to visit Israel, even speaking as a guest in the Knesset.

The two leaders met at Camp David and signed an agreement that maintained peace between Israel and Egypt for more than 30 years. They also began planning the construction of a world peace center at the base of Mt. Sinai.

Herbert. W. Armstrong, founder of the Plain Truth, predecessor to the Trumpet and Watch Jerusalem, frequently met with both leaders and was deeply involved in the Sadat-Begin peace accords. Mr. Armstrong called it the most incredible peace overture of modern times. According to him, it was the sacrifice that made it so incredible.

Watch Jerusalem editor in chief Gerald Flurry writes about this history in his booklet The Way of Peace Restored Momentarily (free upon request). Mr. Flurry highlights:

At extreme personal danger and unprecedented political risk the Egyptian president braved a personal visit to Jerusalem to speak in peace to the Israeli Knesset. … Virtually the entire Arab world harbored intense hatred for the Jews. Yet Sadat traveled right to the heart of the Jewish state and spoke to the Knesset in Jerusalem. Perhaps he didn’t fully realize how much hostility that move would create, but from that point forward he was a marked man. … Shortly thereafter, he was assassinated.

As Mr. Flurry points out, Mr. Sadat “sacrificed his life for true peace.” Despite his best efforts, the tumultuous hatred for the Jews throughout the Arab world proved insuppressible.

This lesson from fairly recent history shows just how dangerous it is for Muslim leaders to show any hint of favor toward Israel.

Will There Be Peace?

Two weeks ago, another terrorist attack was foiled and the leader of the cell was arrested in the Eastern Nile district of Khartoum. According to The EastAfrican, Sudan’s Criminal Investigations department said “his intention was to assassinate the prime minister and other state officials.” The Sudan Tribune said the arrested members of the terrorist group belonged to a violent Islamic group and had just arrived with forged documents from their training in Syria.

After the first attempt failed, the next attempt was put into action. Both the foiled attack and the attack on the prime minister’s convoy occurred after Sudan met with Israel last month.

The Sudanese democratic leaders have nailed their flags to the mast; they have shown themselves willing to talk with Israel. However, these attempts at peace will not succeed.

According to the bbc, 57 percent of polled Sudanese citizens see Israel and the United States as their greatest threats. Based on the same poll, Sudan sees Israel as its single greatest enemy.

A dangerous tide of “intense hatred” for the Jews is building throughout North Africa and the Arab world.

In “The Hidden Danger in Israel’s Arab Outreach,” we showed how these peace agreements with the Arabs are temporary and only last as long as they are beneficial to the Arab states. In that article, we went through a prophecy in Psalm 83 that foretells a coming confederation of Arab nations that will unite for the purpose of blotting out the name of Israel. Many of these nations today, such as Saudi Arabia, Jordan and the United Arab Emirates, are temporarily at peace with Israel. However, as we noted, this so-called peace will only last as long as the Iranian threat is present.

Once Iran has been crushed, as Daniel 11:40 says it will be (for proof, request The King of the South), the scathing Arab hatred for the Jews will once again rise to the surface and an Arab uprising will take half of Jerusalem by force (Zechariah 14:2).

Yet Jerusalem’s captivity will lead directly to the Mount of Olives cleaving in two at the coming of the Messiah. He will “smite all the people that have fought against Jerusalem,” reign as “king over all the earth” (Zechariah 14), and usher in a millennium of true, lasting peace when “nation shall not lift up a sword against nation, neither shall they learn war anymore” (Micah 4:3).