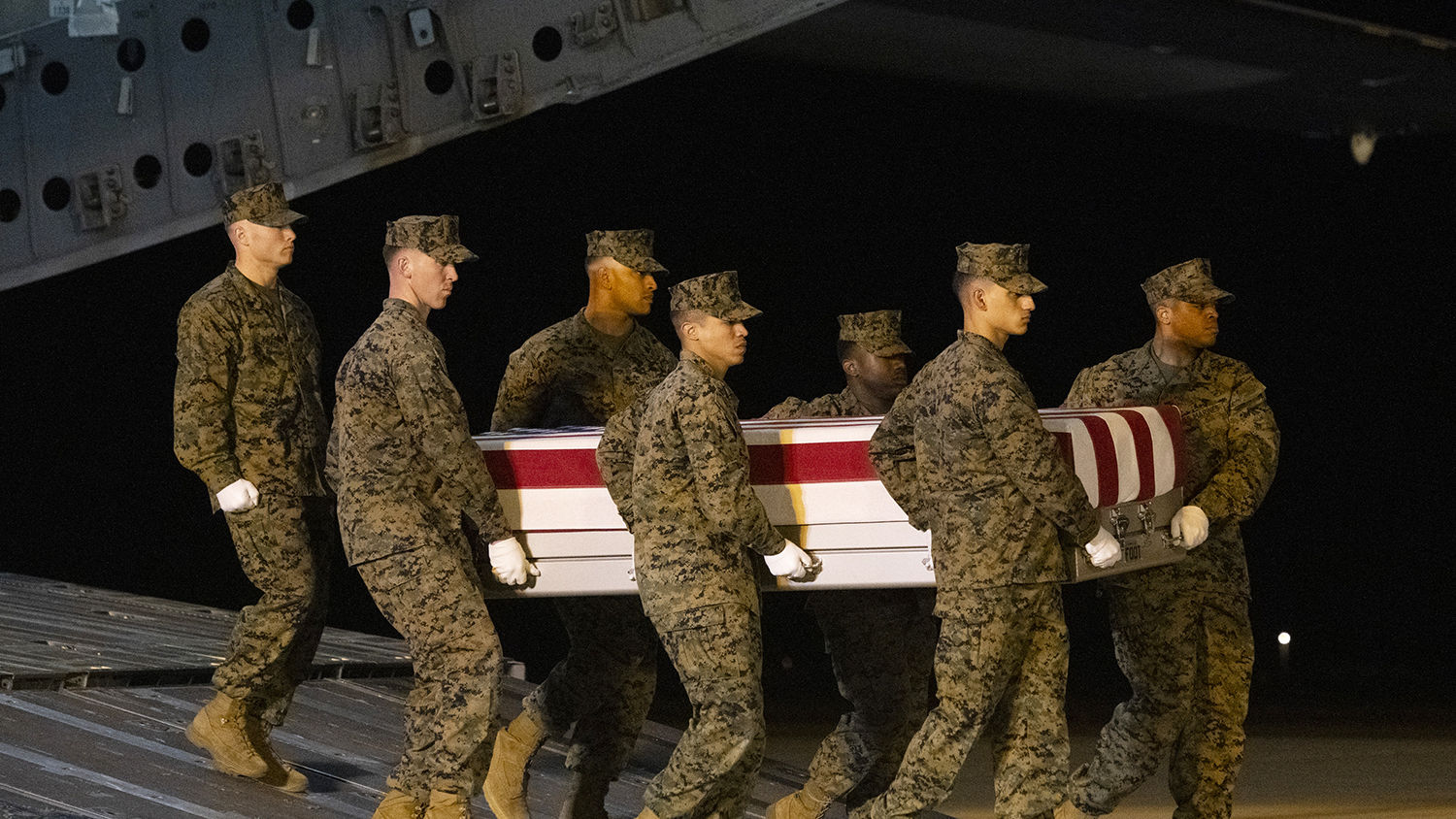 Iranian-backed militias have yet again crossed United States President Donald Trump’s redline. Two Americans and one British soldier were killed when a barrage of 15 Katyusha rockets hit the Taji military base a few kilometers north of Baghdad. Several other coalition personnel were injured, according to Fox News when the rockets crashed into the military base at 7:52 local time on Wednesday evening.

The deaths bring the number of Americans killed in Iraq this week up to four, as two U.S. marines were killed fighting the Islamic State earlier in the week.

After the Wednesday missile barrage, the U.S. conducted air strikes against Kataib Hezbollah, an Iran-backed militia. The U.S. strikes hit four targets, according to Al Jazeera, from which injuries have been reported, but no fatalities have been confirmed.

According to the Jerusalem Post, Wednesday’s attack has Kataib Hezbollah’s fingerprints all over it. Seth Frantzman claimed, “[The Islamic State] does not have the capability to fire so many rockets. The rocket attack is similar to an attack in December … carried out [by] Kataib Hezbollah, a pro-Iranian militia in Iraq.”

Following the U.S. reprisal attack on Thursday, Iranian Foreign Ministry spokesman Abbas Mousavi warned President Trump against taking “dangerous actions” and to instead “reconsider the presence and behavior of his troops in the area,” urging America to leave Iraq.

In many ways, the events since Wednesday’s attack have paralleled those from 11 weeks ago.

President Trump showed Iran his willingness to act, as he did again this week. As Watch Jerusalem assistant managing editor Brent Nagtegaal brought out in “After Suleimani,” the Iranian regime has experienced a temporary chastening. Nagtegaal explained:

Suleimani is dead, but the Iranian regime and Iranian terrorism live on, as does Iran’s quest for dominance.

Iran responded to Suleimani’s assassination by launching more than a dozen precision-guided munitions at an Iraqi base housing American soldiers. However, the missiles were not aimed at the American side of the base. While no American casualties were reported, Tehran told its people that more than 80 Americans were killed in the attack. It was a symbolic, “face-saving” attack intended to deescalate the situation. Ever since, there has been relative “peace” between the U.S. and Iran—until Wednesday’s rocket barrage.

Nagtegaal also explained how events will eventually lead to a U.S. withdrawal from Iraq. Iranian Supreme Leader Ayatollah Ali Khamenei said, “This kind of [Iranian] attack is not enough. The U.S. must be uprooted from the region.” Despite its temporary chastening, the Iranian regime’s quest for domination lives on. It will keep pushing its agenda throughout the Middle East, whether by continuing to exceed limitations on its nuclear program or by working to drive America out of Iraq and the Middle East as a whole.

America’s retreat has been a long-standing Watch Jerusalem forecast. Since 1992, Watch Jerusalem editor in chief Gerald Flurry has said Iran would take over Iraq. Our articles since November 2001 have predicted that America will lose its war on terror. In June 2003, Mr. Flurry wrote, “It may seem shocking, given the U.S. presence in the region now, but prophecy indicates that in pursuit of its goal, Iran will probably take over Iraq.”

Since then, we have seen Iran become the victors over the U.S. in holding stock in the post-Saddam Iraq. In The King of the South (free upon request), Mr. Flurry writes, “Iran is working through standard political and diplomatic channels to position itself to be able to hold stock in the new Iraq, working with the Iraqi government, cementing economic ties, and exploiting other diplomatic channels.”

Ever since Saddam Hussein was ousted, Iran has worked feverishly to infiltrate the Iraqi government. Nearly 17 years later, Iran’s control has become so substantial that months of protests, international condemnation, and U.S. air strikes and drone strikes can’t pry Iraq from Iran’s grip.

In the May 2018 elections, the pro-Iran Fatah Alliance coalition, made up of Iranian-backed, U.S.-designated terrorists, won the second-highest number of seats in the Iraqi parliament. Iran had made it inside the government.

In December 2018, President Trump announced his desire to withdraw the 2,000 troops currently in Syria, saying on Twitter, “After historic victories against [the Islamic State], it’s time to bring our great young people home!” Mr. Trump wanted to become less active in the Middle East.

In March 2019, Iranian President Hassan Rouhani conducted a three-day visit to Baghdad and signed agreements aimed at cementing the alliance between Iran and Iraq. Meanwhile in Iran, Khamenei awarded Suleimani with the prestigious Order of Zulfaqar, the only one awarded since the Iranian Revolution in 1979, for conquering Iraq.

Then, after the tumultuous events earlier this year, President Trump on January 31 called on nato to become more active in the Middle East, with the end goal of the U.S. being less involved. He has even tried to form an “Arab nato” in hopes of forming an anti-Iran alliance to patrol and safeguard the Middle East without American intervention.

Iran is continuing its policy to drive the U.S. out of the Middle East, and the U.S. is in retreat. On January 5, the Iraqi parliament passed a resolution calling for the expulsion of foreign troops, including U.S. troops. Though the parliament does not have the authority to oust U.S. forces, the enactment is a symbol that Iraq, controlled by Iran, wants America out.

A prophecy in Daniel 11:40 describes an end-time clash of civilizations in the Middle East—but the U.S. is not listed as a major actor! It reads: “And at the time of the end shall the king of the south push at him: and the king of the north shall come against him like a whirlwind, with chariots, and with horsemen, and with many ships; and he shall enter into the countries, and shall overflow and pass over.”

Mr. Flurry has identified these players: radical Islamic extremism, led by Iran, is the king of the south; a unified, German-led European military superpower is the king of the north. This prophecy says that Iran will push against Europe, forcing it to retaliate in a military whirlwind attack.

Iran will be conquered by Europe, but according to this prophecy, the United States will not be involved. There is a reason why. America has lost the pride of its power; it has lost its will to fight.