Mass panic provides a veil for the U.S. to begin its retreat from Iraq.
By Warren Reinsch • March 18, 2020 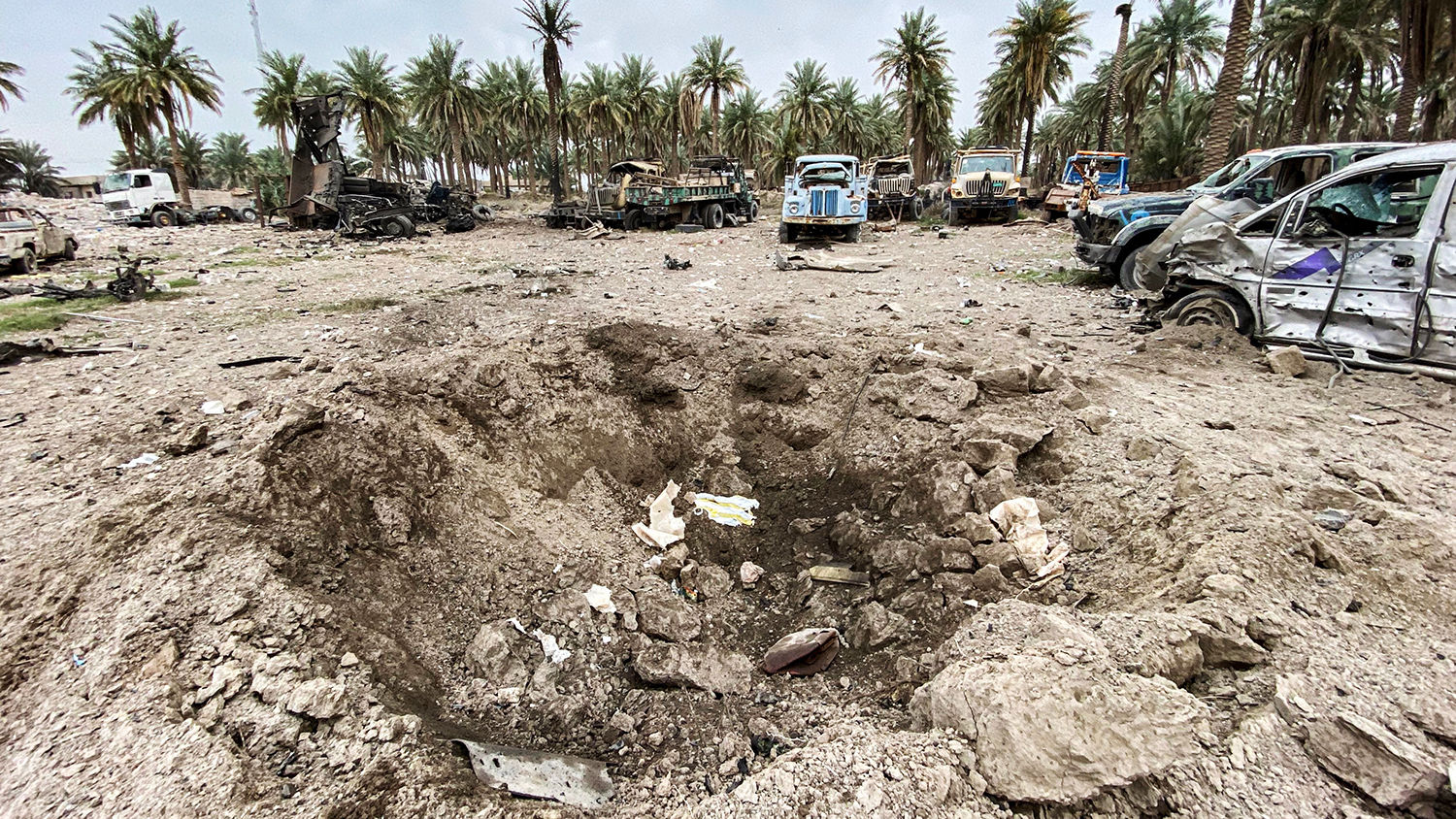 An impact crater resulting from U.S. military air strikes at a militarized zone in the Jurf al-Sakhr area in Iraq’s Babylon province controlled by Kataib Hezbollah
-/AFP VIA GETTY IMAGES

The United States is in “national emergency” mode. Since President Donald Trump declared a state of national emergency on March 13, shelves have emptied, schools have closed, and flights have been canceled. Meanwhile, perilous events occurring on the geopolitical scene are being superseded by fears of coronavirus.

As America turns inward to focus on combating the Wuhan coronavirus, Iran’s renewed push to drive the U.S. out of Iraq has found itself buried by the media-inflicted mass panic.

On March 11, the Iran-backed Kataib Hezbollah militia fired a barrage of 15 Katyusha rockets at the Taji military base a few kilometers north of Baghdad. Two Americans and one British soldier died and several others were injured in the attack. But the media’s preoccupation with coronavirus and the mass panic of the American people caused this crossed “redline” to be become lost in the news. Quite contrary to parallel events in December and January when an American contractor was killed in a Kataib Hezbollah missile attack, these deaths have gone largely unnoticed and unreported by the media. Instead, the focus remains on coronavirus.

On March 14, Kataib Hezbollah launched another barrage of 33 Katyusha missiles at the same base they attacked just three days earlier. According to Reuters, the Pentagon and the Iraqi military claimed that several Iraqi servicemen were “critically wounded” and two of the three injured American troops were “seriously injured” and undergoing treatment in Baghdad.

“The retaliatory strikes were meant to deter militia from staging any more rocket attacks,” explained Reuters. But the strikes failed “to stem more attacks on the U.S.-led coalition …. The Iraqi military said on Saturday that [Iraq] should instead hasten to implement a parliamentary resolution expelling them [U.S. forces].”

This “parliamentary resolution” to expel U.S. forces has already been passed. However, since the Iraqi parliament does not have the political authority to kick out the U.S., the resolution was symbolic of the direction the Iraqi government is shifting.

Several Iraqis have come out condemning the U.S. air strike launched in response to Iran’s earlier attack. The Iraqi military claimed the strikes killed six Iraqis—three members of the Iraqi security forces, two policemen and a civilian—and injured four soldiers, two policemen, a civilian and five militiamen. Iraqi religious authorities claimed that the two civilians killed in the strikes were construction workers at an airport building site in Karbala, a Shiite holy city. Iraqi President Barham Salih condemned such attacks, claiming that they could push Iraq over the edge to become a failed state and cause a revival of the Islamic State. Iraq’s Foreign Ministry announced plans to bring a complaint to the United Nations.

Notice the quick political backlash the U.S. received from the Iraqi government. There is a deep hatred and mistrust of America brewing in Iraq. While some Iraqis still support the U.S. and desire its help in freeing them from the Iranian-influenced regime, that faith in America has been slowly eroding over the past 18 years of conflict—especially this last year as Iraq has found itself in the crossfire between Iran’s proxies and U.S. forces.

A decree by former Prime Minister Adel Abdul Mahdi called for the Iran-backed—and in many cases, Iran-aligned—Shiite militias to merge with the Iraqi security forces. This move gave the militias access to advanced training and weaponry and gave them virtual invulnerability, because attacking the militia became attacking the Iraqi state (as we now see playing out in last week’s air strikes). In the May 2018 elections, the pro-Iran Fatah Alliance coalition—partly composed of Iran-backed, U.S.-designated terrorists who became politicians—won the second-highest number of seats in the Iraqi parliament. Ever since, they have called for the ousting of U.S. forces.

The terrorists’ dream may soon become a reality.

According to nbc News, three U.S. defense officials said that the U.S. military is planning to consolidate hundreds of troops in Iraq, including withdrawing troops from joint bases at al-Qaim near the Syrian border, Qayyarah Airfield West near Mosul, and possibly Al Taqaddum Air Base west of Baghdad and K-1 Air Base in Kirkuk (where the U.S. contractor was killed in December).

Additionally, the military is also considering reducing the Combined Joint Task Force Operation Inherent Resolve from a three-star to a two-star command, putting the operation under a major general instead of a lieutenant general. This means the U.S. wants to put less focus on and be less involved in the Iraqi theater.

A U.S. defense official reportedly said that the recent decision to consolidate troops in Iraq was not a result of the rocket attacks on Taji last week, but has been in the works for several months. While this may or may not be true, the timing of the consolidation—or partial withdrawal—is interesting considering the recent attacks and the media’s preoccupation with coronavirus. The hysteria and fear surrounding the new disease has provided a cover for both Iran’s rise and America’s retreat.

Journalist Lee Smith wrote in the New York Post on January 7 that Qassem Suleimani’s assassination was “an opportunity” to implement “the immediate and complete withdrawal of U.S. troops from Iraq.”

In our February article, “After Suleimani”, we gave five trends to watch in the post-Suleimani Middle East, one of which was “The United States will exit Iraq.”

In his November 2017 feature article “America’s Greatest Defeat—Iran’s Victory,” Watch Jerusalem editor in chief Gerald Flurry wrote: “America may have helped drive the Islamic State out of Iraq and Syria—but now Americais about to be driven out of Iraq and Syriaby Iran! We are about to see a vicious turnaround. In many ways, it has already started.”

Daniel 11:40 prophesies of an end-time power bloc called “the king of the south” that is extremely aggressive. In his booklet The King of the South, Mr. Flurry identifies this Middle Eastern power bloc as radical Islamic extremism, led by Iran. Daniel 11 also says that Iran will “push” the world toward war. In the last month, Iran has attacked U.S. troops, announced it has enough uranium required to build a bomb, and worked with the Houthi militia in targeting international trade through the Bab el-Mandeb strait and the Red Sea. Yet these significant geopolitical events have gone largely unnoticed by the media.

Iran’s rise as the king of the south is partially being concealed under a veil of media-induced coronavirus panic. While the coronavirus is definitely an issue that needs to be addressed, the recent obsession over the disease has, in some ways, been a large distraction from world-shaking geopolitical events.

As the U.S. and the world as a whole focuses on coronavirus, events in Iraq and the Middle East are speeding toward the fulfillment of Bible prophecy.