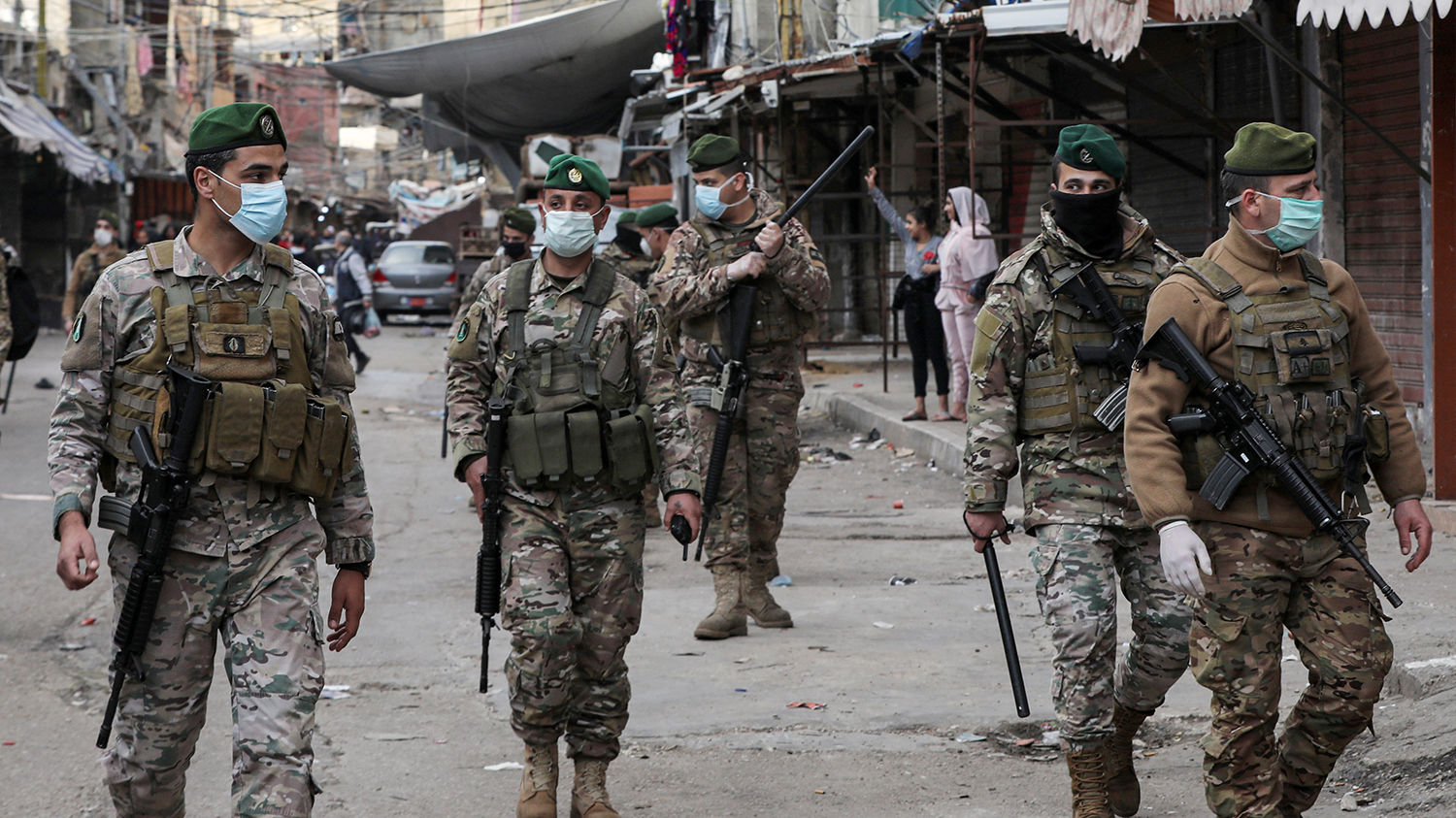 Lebanese Army soldiers patrol in the market of the Palestinian refugee camp of Sabra, south of Beirut, as measures are taken to shut down all shops in a bid to limit the spread of COVID-19.
ANWAR AMRO/AFP VIA GETTY IMAGES

The Lebanese government declared a state of emergency on March 15, putting its economy on virtual lockdown over fears of the Wuhan coronavirus spreading throughout the crowded nation.

The government ordered the closure of most of the nation’s public facilities and private companies. According to Reuters, Lebanon also closed its borders, ports and airport from March 18 to March 29 and told its citizens to stay home except for matters of “extreme necessity.” Police intervened to close down several shops in Beirut, which remained open despite the government’s orders.

According to Johns Hopkins University, there are less than 200 confirmed coronavirus cases in Lebanon, a nation with 5.4 million people. Nevertheless, like many nations, Lebanon has been swept along by the current of worldwide fear. The drastic measures being undertaken by Lebanon’s government will only exacerbate its crashing economy.

The Lebanese pound has lost about 40 percent of its value since October. Food imports have been slashed by 30 percent to 40 percent, and industries are struggling to obtain raw materials as prices rise and sales plunge. At least 785 restaurants, cafes and clubs in Lebanon have shut down in the last six months.

“More than 220,000 jobs in the private sector have been shed since mid-October, when protests fueled by worsening economic conditions erupted against the political elite,” reported Haaretz.

Many, like Ramzi El Hafez, a private business owner, are calling this “catastrophe” the “heaviest one-shot drop” since the Lebanese Civil War (1975–1990). To Lebanon’s citizens, “There is no end in sight.”

“Almost all the work has come to a halt. We’re unable to do anything,” said Mohammed Sukkar, an owner of a contracting company in Lebanon.

According to Ali al-Shareef, head of the Sidon trade association, 120 of Sidon’s 600 shops have closed since October. With the new economic shutdown, Shareef expects the number to more than double in the next few months, resulting in the closure of about half of the city’s shops.

While the coronavirus shutdown is hastening Lebanon’s economic collapse, the country was already in a desperate situation before the introduction of the new virus.

According to World Bank statistics, about 27 percent of Lebanese lived below the poverty line in 2011–2012. By 2018, that number reached about a third of Lebanon’s population. On Nov. 6, 2019, World Bank Director Saroj Kumar Jha said that poverty in Lebanon could rise to 50 percent if the economic situation continued to worsen (which it has).

Reuters reported last year that economic growth in Lebanon, which was usually around 1 percent to 2 percent, fell to zero and the national debt reached 150 percent of gross domestic product. Water and power cuts in Lebanon occurred almost daily, sewage and trash were building up in the streets, and new taxes were enforced on messaging apps, such as WhatsApp. The people had finally had enough.

Beginning on Oct. 17, 2019, over a million Lebanese, nearly a fourth of the nation’s population, came out in protest against the poor economic conditions and government corruption, accusing the political elite of exploiting the state’s resources.

While the coronavirus has exacerbated the crisis, the real virus in Lebanon is Hezbollah.

The Iran-backed terrorist group and political wing has a stranglehold on Lebanon’s government. After the nation’s first elections in nearly a decade, Hezbollah won a small majority in the parliament and now controls the government’s Health Ministry and other smaller government offices, which it has used to siphon off government funds to pay for its militiamen and military equipment, to the detriment of the nation’s economy.

Additionally, with the imposition of United States sanctions in the last two years and the inability to determine whether a company is supporting Hezbollah, many private companies are steering clear of investing in Lebanon for fear of suffering secondary sanctions from the U.S.

These two factors combine to make Lebanon’s economy extremely weak. Many of its citizens are beginning to realize this fact and have increasingly come out in protest against Hezbollah.

But despite months of demonstrations that led to the resignation of Prime Minister Saad Hariri and the dissolution of his cabinet, Hezbollah remains firmly entrenched in the government.

On December 19, Hassan Diab was tasked to form the next government after Hezbollah and its allies nominated him in parliament. “A government like this will be perceived as Hezbollah’s government,” Sami Nader, the director of the Levant Institute for Strategic Affairs, told Al Jazeera. “This will isolate Lebanon from donors and expose it to sanctions at a very critical point in time where it badly needs the international community to help deal with the collapse.”

This is exactly what has happened. The Lebanese people are struggling to buy food, water, clothing, and shelter and to simply survive.

As the economy continues to worsen amid the coronavirus-induced nationwide shutdown, deep-seated frustration is brewing throughout the population.

Lebanon is practically controlled by Hezbollah and, by extension, Iran. However, we at Watch Jerusalem are watching for a dramatic shift to occur in this region: Lebanon will be peeled from Iran’s grasp.

This could happen by Hezbollah breaking from Iran or it losing power. Given Hezbollah’s current military and political power in the nation, the only way Lebanon could join an anti-Iran alliance is if it had Hezbollah’s support or if it wrested control of southern Lebanon from Hezbollah.

In “Why You Need to Watch Lebanon,” Watch Jerusalem editor in chief Gerald Flurry wrote about a coming second Lebanese civil war:

For the past decade, Hezbollah has developed a reputation for being moderate and friendly to the Lebanese by funding schools, hospitals, clinics and other social programs within southern Lebanon. … However, Hezbollah’s contributions to the war in Syria are changing people’s view. …

Hezbollah is losing all credibility in the eyes of the majority of the Lebanese. The division between these two sides is threatening to turn violent.

If Lebanon is to be free from an Iran-influenced Hezbollah, it will need foreign support. The Bible reveals where this support will come from.

A prophecy in Psalm 83 indicates that Lebanon will be removed from Iran’s influence. The prophecy lists several Arab nations that are allied in a sort of anti-Iranian coalition. The Anchor Bible states, “History transmits no record” of these events in Psalm 83. That means that this psalm is a prophecy for the future, not the description of the historical past.

This passage in Psalm 83 seems to acknowledge the separation of Hezbollah from the rest of Lebanon. Among the nations listed in verses 6-8 are Gebal, which refers to the modern nation of Lebanon, and the inhabitants of Tyre, referring to southern Lebanon, home of Hezbollah. According to Psalm 83, both parts are included in this prophetic alliance.

While the Bible does not say exactly how this alliance will be formed, it does tell us where Lebanon will find its foreign support. Verse 8 says, “Assur also is joined with them.” Assur is another biblical name for Assyria.

The cruel, warlike Assyrians are recorded in the Bible living in Mesopotamia beginning in the 16th century b.c.e. In the sixth century b.c.e., they migrated to the southern shores of the Black Sea, then up into Scythia, then across into Central and Western Europe by about the third century b.c.e. When the Romans encountered them around this time, they referred to them as Germani, meaning “war men.” Thus, the ancient, warlike Assyrians became the people of the modern-day nation of Germany.

This prophecy in Psalm 83 says that Lebanon will soon align itself with Germany.

After the U.S., Germany is the second-largest financial supporter of Lebanon. However, the U.S. wants to pass on its responsibility in the region. On January 8, the U.S. called on nato, which is primarily made up of European Union countries, including Germany, to take over the Middle East. Since then, we have seen a sharp rise in German activity in the Middle East, from supporting an anti-Iran naval mission to training Saudi military forces to hosting a diplomatic conference to resolve the Libyan civil war. America is on the way out, and a German superpower is emerging to take its place.

“Continue to watch as Lebanon descends into another civil war,” Mr. Flurry wrote, and “watch to see whether [Germany] decides to send its soldiers into Lebanon.” With economic collapse staring the nation in the face and growing frustrations leading to civil war, Lebanon will soon experience a dramatic change.

For more information, read “Why You Need to Watch Lebanon,” by Mr. Flurry.