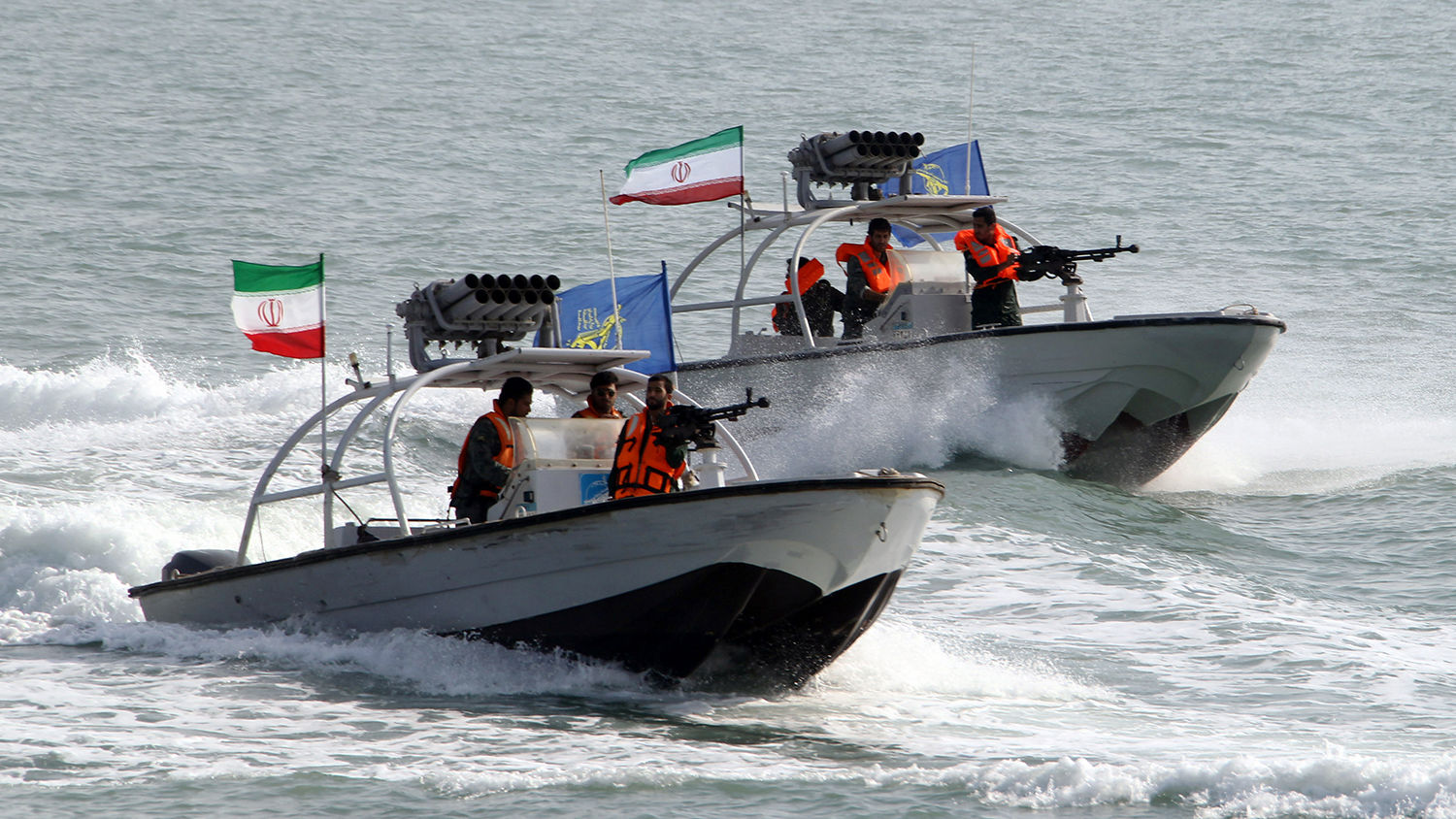 Eleven Iranian speedboats surrounded and harassed a fleet of United States Navy warships traversing the northern Persian Gulf on Wednesday. The smaller, faster Iranian vessels came within 50 yards of the uss Lewis B. Puller, an expeditionary sea-base vessel, and came within 10 yards of colliding with a U.S. patrol boat.

The U.S. Navy released a statement saying that the Iranian vessels “repeatedly crossed the bows and sterns of the U.S. vessels at extremely close range and high speeds” while the U.S. was conducting integration operations with Apache attack helicopters.

The U.S. Navy and Coast Guard issued several warnings to the Iranians via radio, horns and other devices, none of which were initially heeded by the Iranians. A video showed one Iranian soldier manning an “unclipped” mounted gun and pointing it at the warships before speeding in front of them. Only after an hour of showing off and harassing the U.S. fleet did Iran finally respond and keep its distance.

This is not the first time Iran has harassed the U.S. Navy in international waters. In July and August 2016, Iranian speedboats harassed the uss Squall, uss New Orleans, uss Stout and uss Nitze, while staying several hundred yards away.

In 2018, Iranian boats harassed the Essex amphibious ready group, this time coming within 300 yards, and even firing missiles near the uss John C. Stennis aircraft carrier. Now Iran has pushed it even closer, passing within a mere 10 yards of a U.S. military vessel.

Last May, Iran attacked four commercial vessels off the coast of the United Arab Emirates. In June, Iran attacked two massive petrochemical tankers in the Gulf of Oman, forcing the crew to abandon ship.

According to the U.S. Navy, the U.S. has been conducting operations in the Persian Gulf since late March. Iran’s sudden decision to harass the fleet comes as the emboldened regime seeks to build on previous success by upping the pressure on the U.S.

Last month, after terrorist militias sent missile barrages against U.S. forces, the U.S. began consolidating its forces in Iraq. Since then, the U.S. has withdrawn from six bases and posts. After being severely punished in January, Iran finally pushed the limits again to see what it could get away with. This time, Iran won. Instead of retaliating, the U.S. chose to withdraw. Giving in to, or appeasing, Iran will not satisfy the regime. This victory has only made the nation bolder.

Jerusalem Post’s Seth Franzman wrote, “Iran is aware the U.S. Navy has suffered recent challenges with the coronavirus …. It may want to test U.S. resolve.”

Iran is always looking to push the boundaries and see how much it can get away with. But recently, Iran has been facing more internal conflict with its people being fed up with a corrupt government and its poor handling of the coronavirus crisis. This internal unrest has actually made the Iranian regime even bolder and pushier on the world stage as it works to use military victories over the U.S., even if small and symbolic, as propaganda to placate its frustrated population.

But ultimately, Iran’s constant meddling in the Persian Gulf and other vital waterways is essential to its much larger regional ambitions. Iran wants to gain control over maritime oil trade.

Cool interactive map showing how many tankers FULL of #oil in the Persian Gulfhttps://t.co/f0L8sVWdLu pic.twitter.com/3xyID1ibvg

The Persian Gulf and Strait of Hormuz facilitate roughly a third of worldwide maritime oil shipments.

Since approximately the entire northern coast of this waterway is Iranian territory, Iran is already in a good geographic position to control the Persian Gulf. Iranian officials frequently echo threats to close the Strait of Hormuz to world trade. Doing so, even if only for a few days, would severely hurt the world economy, causing oil prices to skyrocket around the world.

Iran’s Sept. 14, 2019, attack on the world’s largest oil processing facility in Saudi Arabia immediately halted 5 percent of global oil production, causing oil prices to surge up to 20 percent. Bloomberg called it “the worst sudden supply disruption ever.” And that was only one facility. The damage Iran could cause by shutting down an entire shipping lane, such as the Strait of Hormuz, is incalculably worse.

One of the major barriers to Iran achieving this goal is the U.S. Fifth Fleet, which is headquartered in Bahrain and is responsible for patrolling roughly 2.5 million square miles of sea in the Persian Gulf, Strait of Hormuz, Gulf of Oman, Arabian Sea, Gulf of Aden and Red Sea. Iran knows if it were to close the Strait of Hormuz, America would be quick to react.

Franzman wrote, “Iran’s navy and its [Islamic Revolutionary Guard Corps] fast boats are no match for the U.S. They could be destroyed in a day of serious fighting. But they are good for harassment, mining, and being able to strike at a time of their choosing.”

Instead of full-on war, Iran wants to “test U.S. resolve” by harassing its naval forces. Just as it forced the U.S. to withdraw from military bases and consolidate its troops in Iraq, Iran is likely hoping to force the U.S. out of the Persian Gulf before making a move on shutting down the Strait of Hormuz.

This is a trend that we watch closely. In “Iran Gets a Stranglehold on the Middle East,” Watch Jerusalem editor in chief Gerald Flurry wrote about Iran’s strategy to control Middle East oil and showed how quickly Iran threw its support behind the Houthi militias at the start of the Yemeni Civil War, even supplying them with sea mines, drones and missiles to attack vessels traversing nearby waters. In doing so, Iran became “the gatekeeper of the Red Sea and the Suez Canal,” another key aspect to the regime’s strategy.

“The Houthi takeover in Yemen proves that Iran is implementing a bold strategy to control the vital sea lane from the Indian Ocean to the Mediterranean Sea,” wrote Mr. Flurry. “Now that Iran controls Yemen, it can virtually close or open this spigot on Middle East oil bound for Europe.”

Controlling the Persian Gulf is not enough for Iran’s ambitions; it also needs to control the Red Sea, another vital shipping lane, in order to control oil trade.

Bible prophecy foretells of a radical Islamic group of nations that will rise and gain control of the Red Sea waterways. This Islamic alliance will be led by Iran. Daniel 11:40 says, “And at the time of the end shall the king of the south push at him: and the king of the north shall come against him like a whirlwind, with chariots, and with horsemen, and with many ships; and he shall enter into the countries, and shall overflow and pass over.”

In his booklet The King of the South (request your free copy), Mr. Flurry thoroughly proves that radical Islamic extremism, led by Iran, is this prophesied king of the south in Daniel 11:40. This scripture says that Iran, and its radical Islamic proxies, will have a very pushy foreign policy. No other nation in the Middle East is as radical and pushy as Iran. Though we see a lot of tension between Iran and the U.S., the Bible says this “push” will be directed at Europe.

Europe relies heavily on its precious oil commodity flowing through the Persian Gulf and the Red Sea. If this waterway were attacked and passage barred, vessels would have to reroute around the southern tip of Africa, tripling the sailing time from the Persian Gulf to Italy, which imported 19.7 percent of its crude oil from Iraq in 2016.

Already, America has shown a desire to become considerably less involved militarily in the Middle East, even asking Europe to take over the security void. Europe sees the growing Iranian threat and has begun taking steps to protect its trading vessels. On January 30, the first French frigate began patrolling the Persian Gulf, which has since been joined by a Dutch vessel, as part of Europe’s new anti-Iranian naval mission, supported by Belgium, Denmark, France, Germany, Greece, Italy, the Netherlands and Portugal.

Europe and Iran are on a collision course. Soon, these two nations will clash in a terrifying world war and Iran’s belligerence will finally be put to an end.

For more information on Iran’s strategy to control these maritime trade arteries, read Mr. Flurry’s article “Iran Gets a Stranglehold on the Middle East.”